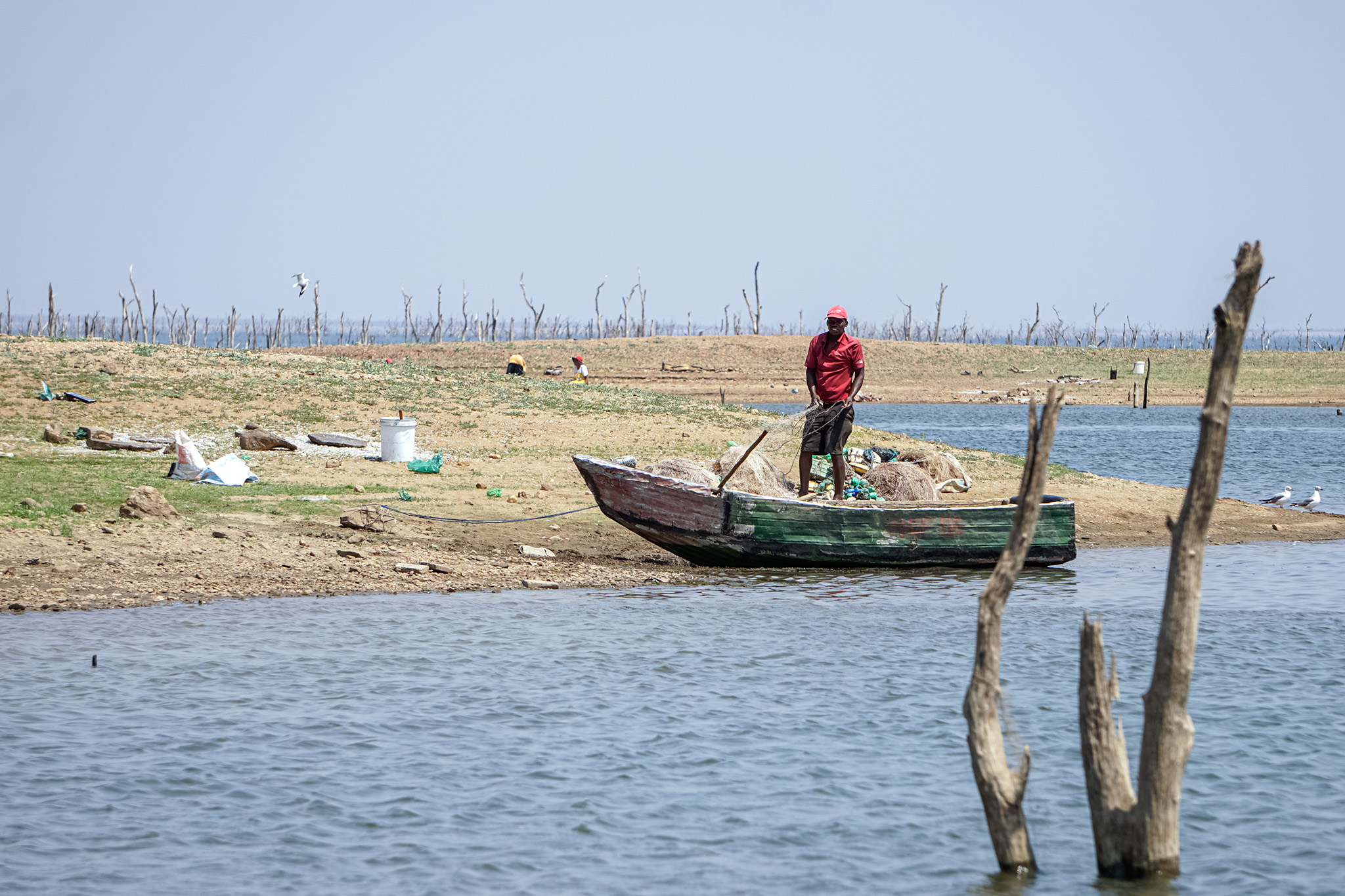 GACHE GACHE, ZIMBABWE — As boats near the shore, fishermen in cut-off shorts and worn T-shirts hop into waist-deep water to pull their boats onto the gravel.

Their skin is dark, almost black, burned by hours spent on the water in the punishing sun. The boats are flimsy, made of recycled building materials, like thin asbestos sheets held together by bolts and cement. The boats fill with water easily, and the fishermen constantly scoop out water as they fish.

Fishing has taken on new value in Zimbabwe’s dilapidated economy. A long, ongoing drought coupled with the country’s endless stream of new monetary policies has made making a living in agriculture and farming nearly impossible. As their land goes fallow, farmers have headed to fishing communities like this one to try their hands at fishing.

“Fishing is the backbone of our economy,” says Tichaona Manzungu, chairman of the fishermen’s society in Gache Gache.

But an influx of unregistered fishermen and a lack of regulations means that this community’s receding waters are fast becoming overfished. 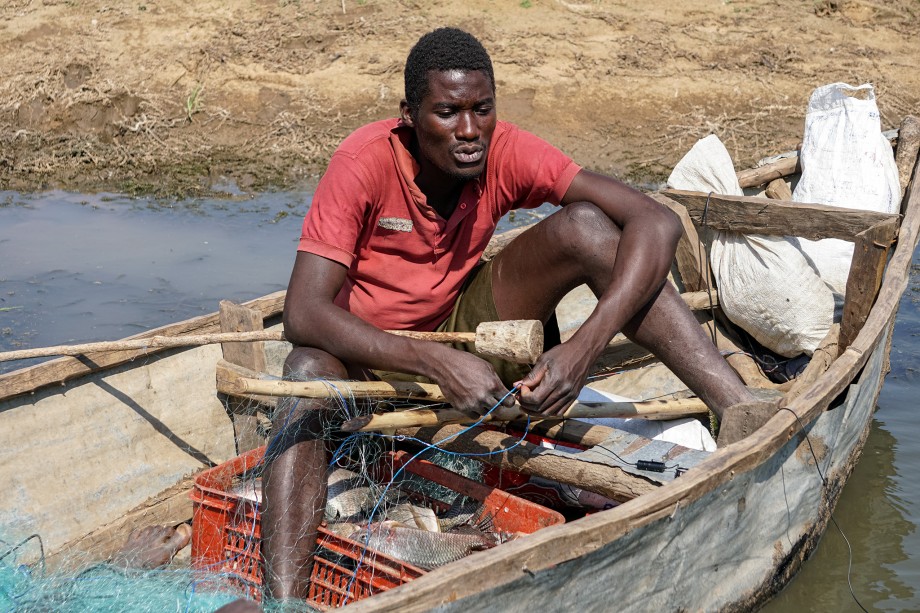 Tinomudaishe Ganye, 25, is an unregistered fisherman says he knows he’s using illegal fishing methods that allow him to catch more fish in a shorter amount of time.

While this community’s population is increasing – there was a 44% population spike between 2014 and 2019 – the work of fishermen isn’t easy.

“It is very dangerous work, what these fishermen do,” says Felix Musengi, a scout with the Nyaminyami Rural District Council, which represents this area.

Climate change is likely to blame for low rainfall over the past two decades, which has caused Lake Kariba’s water levels to drop significantly. That means fishermen have had to go deeper into the water to catch fish. And that can be extremely dangerous.

“Just last week we were called to the waterfront. A crocodile had its teeth firmly set on a young, unregistered fisherman. We took down the crocodile, but not before it had made quick work of him,” Musengi says. “His family only buried his torso. He was 23.”

The combination of scrappy boats and receding water levels is also risky. Numerous fisherman recount tales of getting caught on trees, which ripped their boats apart. Getting stuck on a tree increases the risk of hippo attacks too.

Another family recently buried a pair of blue shorts, the only remnants of their loved one after he was attacked by a hippo.

But local fishermen say the dangers are worth it, because it is their only source of livelihood in Zimbabwe, where true unemployment numbers are unknown, but some estimates range as high as 94%.

Just last week we were called to the waterfront. A crocodile had its teeth firmly set on a young, unregistered fisherman. We took down the crocodile, but not before it had made quick work of him. His family only buried his torso. He was 23.Felix Musengi, a scout with the Nyaminyami Rural District Council

The small Gache Gache fishing community, known for its hefty catfish, bream and freshwater sardines, has become a primary provider of affordable fish across the country. The fish are on sale daily in supermarkets, such as Choppies, and by unlicensed local vendors who line the streets, looking to move the fish quickly for profit.

The rush to make money from fish, in an economy with few other options, is creating a wave of additional problems, says Manzungu, of the local fishermen’s society.

“These guys catch a lot more fish than we do and therefore earn more than us, who play by the rules,” Manzungu says. “If it wasn’t for the fact that I have a post and have to lead by example, I’d probably also do it.”

“They use twine nets, which are illegal, as they are non-selective, which makes the danger of overfishing very high,” Norton says, adding that tigerfish and bream are in particular danger of being overfished. “They will take whatever species gets caught in their nets, with no thought to sustainability or consequences.”

While regulated day fishing tends to yield smaller catches, overnight fishing with illegal methods can be quite lucrative.

“One night of fishing can turn up to at least 700 kilograms (1,500 pounds) of fish,” says Augustine Kadamanja, a former fisherman of Gache Gache. That would yield as much as 6,300 ZWL on the market. The average daily catch for a registered fisherman is between 4 and 24 kilograms (9 to 53 pounds).

The country’s fishing regulations, introduced in 1975, are severely out of date, local advocates say.

Zimparks, the entity that manages fishing and wildlife in Zimbabwe, has not announced any plans to revise or update fishing regulations, but Tinashe Farawo, public relations manager at Zimparks, says they are aware of the growing problem.

Farawo says Zimparks will work to prevent what he called “dry water,” or water with no fish in it. In addition to current rules, like those that prohibit twine nets, they are considering setting limits on daily catches to prevent overfishing. But no action has been taken to research or implement new regulations.

Local fishermen question the impact new regulations would have, as many of the current rules aren’t followed or policed. For example, all fishermen on the lake are supposed to register annually, and no one is allowed to fish on the lake at night – two regulations that are flouted daily.

These guys catch a lot more fish than we do and therefore earn more than us, who play by the rules. If it wasn’t for the fact that I have a post and have to lead by example, I’d probably also do it.Tichaona Manzungu, chairman of the fishermen’s society in Gache Gache

There have been a few instances of authorities evicting people who built unplanned settlements in undesignated fishing areas.

Rueben Chibonta, senior ranger and revenue clerk of the Nyaminyami Rural District Council (NRDC), says getting fishermen to register is important. But the current permit program limits the number of permits available in Gache Gache to just 175.

“The population is way more than the 175,” Chibonta acknowledges. But he says any registered fishermen is a positive step. “If we made the fishing free-range, there will no longer be any fish left.”

Frustration over the influx of unregistered fishermen is matched by frustration that the NRDC is not accepting new applications for registration.

Tinomudaishe Ganye, 25, is an unregistered fisherman. He says he was unable to get a permit despite multiple tries.

“I came here in 1994, as a baby, when my parents migrated to this area to buy and sell fish. I grew up and started fishing myself, since there are no other opportunities to make a living here. There isn’t even a proper school,” Ganye says.

He says it is nearly impossible to get a fishing permit, which costs 34.50 ZWL, even on the off chance that there is an opening for an application. “We never get a chance because the relatives of the deceased or previous permit holder can easily assume that permit and fish in their stead,” he says.

But Ganye says there are benefits of being unregistered, despite the dangers.

“Hippos and crocodiles are our nemesis on the water. Hippos can upend your boat and drown you, or crocodiles can snatch you right off the boat,” Ganye says.

“We use a method of fishing called ndombolo fishing,” Ganye says.

Ndombolo fishing is prohibited but effective. In this technique, also called fish driving, fishermen set a twine net in the water and use a ndombolo stick, which has an upside-down drum-shaped object attached to it. When the stick hits the water and goes under, it creates an underwater bubble, which startles the fish into fleeing toward the net. With this method, Ganye says he can catch three to four times the amount of fish in three hours that a registered fisherman might.

Unregistered fishermen, like Ganye, acknowledge the long-term effects that their techniques might have on the lake and the country’s fish supply. But they feel they have few options.

“I have a family. I have children, a wife and parents who all rely on me to take care of them. I have no education to make it anywhere other than here,” Ganye says. “To me, the crocodile in my house is poverty, and it’s much more terrifying than the crocodile in the water.”