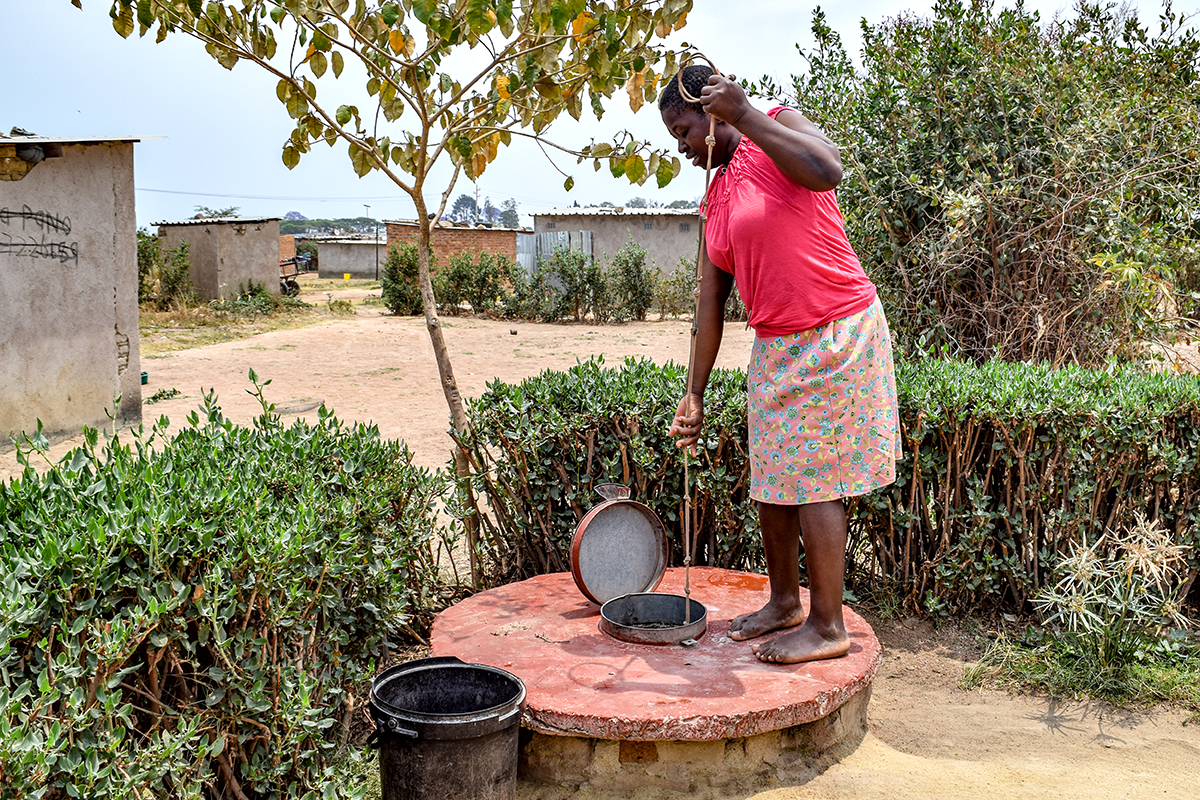 HARARE, ZIMBABWE – Mavis Porini prepares lunch for her six children, outside of her home in Hopley Farm, south of Harare, Zimbabwe’s capital. Porini has been living here since 2013, but she has no water supply or sanitation facilities.

The family relies on others for water.

“We borrow water from neighbors who dug wells,” she says. Some wells are in the graveyard opposite her house, she adds.

The 34-year-old mother purchased the 100-square-meter (1,076-square-foot) plot of land in this informal settlement from a land baron for $60, but she says she has no documentation to prove that she legally owns it.

Despite the government’s numerous efforts to get rid of informal settlements, some have expanded. Now, officials say they are working to bring basic amenities, including water, sewage systems and roads, to some of these densely populated areas, while better regulating land ownership. But improvements are slow, residents say.

In May 2005, the Zimbabwe government launched Operation Murambatsvina, a large-scale campaign to clear illegal houses and structures from its cities, among other changes. During six weeks between May and July 2005, about 700,000 Zimbabweans lost their jobs and were left homeless, according to estimates from the United Nations.

Months later, the government created the Hopley Farm settlement to accommodate some of those who were displaced. But the settlement lacked adequate infrastructure and amenities, according to a 2006 report from Amnesty International and Zimbabwe Lawyers for Human Rights. More than a decade later, the area remains overpopulated and lacking in infrastructure. 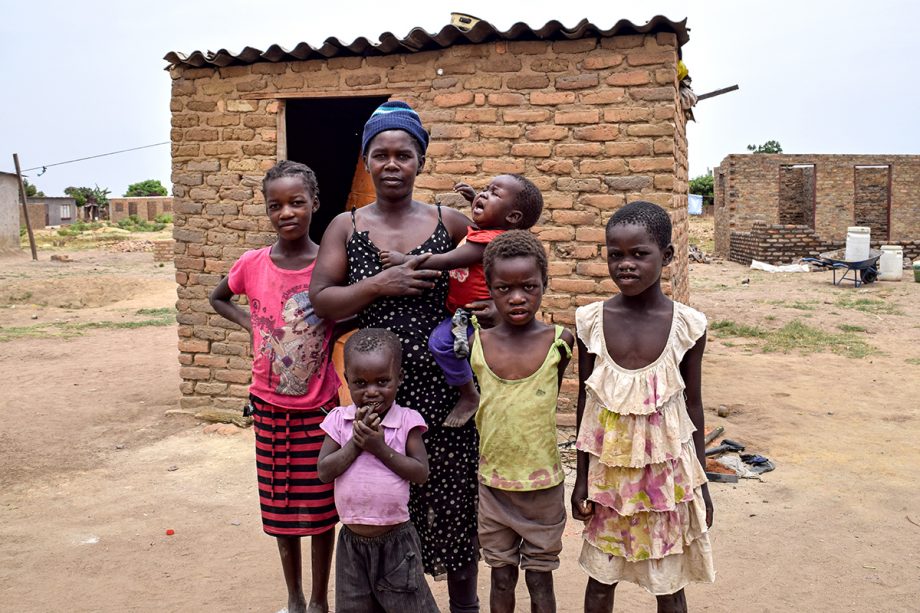 Mavis Porini and her five children stand outside their house in Hopley Farm, an informal settlement just outside of Harare, Zimbabwe’s capital, where they have been living for the past five years.

Hopley Farm has about 7,500 houses, locally called residential stands, each measuring between 100 square meters (1,076 square feet) and 300 square meters (3,229 square feet), says Addmore Nhekairo, director of housing and community services for the City of Harare, the body in charge of city management, water and utilities.

The number of residents exceeds the number of residential stands available. Approximately 60,000 people live in Hopley Farm, he says. While some were given these plots of land by the government during the 2005 operation, the legality of land ownership remains in question for others who moved here in recent years.

With its urban population increasing by an annual average of 2.44 percent, Zimbabwe’s housing shortage is worsening. According to a 2015 government report, there’s a national shortage of 1.25 million housing units. Little is being done to address housing challenges, some say. The high demand for housing and the shaky economy have led many to seek alternative methods that do not require going through the state to acquire housing.

Porini says many residents fell into the same trap she did. They bought land from people who claimed to work for the government or to personally own the land, and then ended up with no proof of purchase or with bogus documents, she explains. Other times, people receive land from campaigning politicians, says Takawira Mubvami, senior programs officer for the Municipal Development Partnership for East and Southern Africa.

Precious Shumba, director of the Harare Residents Trust, says that when political parties distribute land free of charge, recipients are afraid to question the same officials about developments. 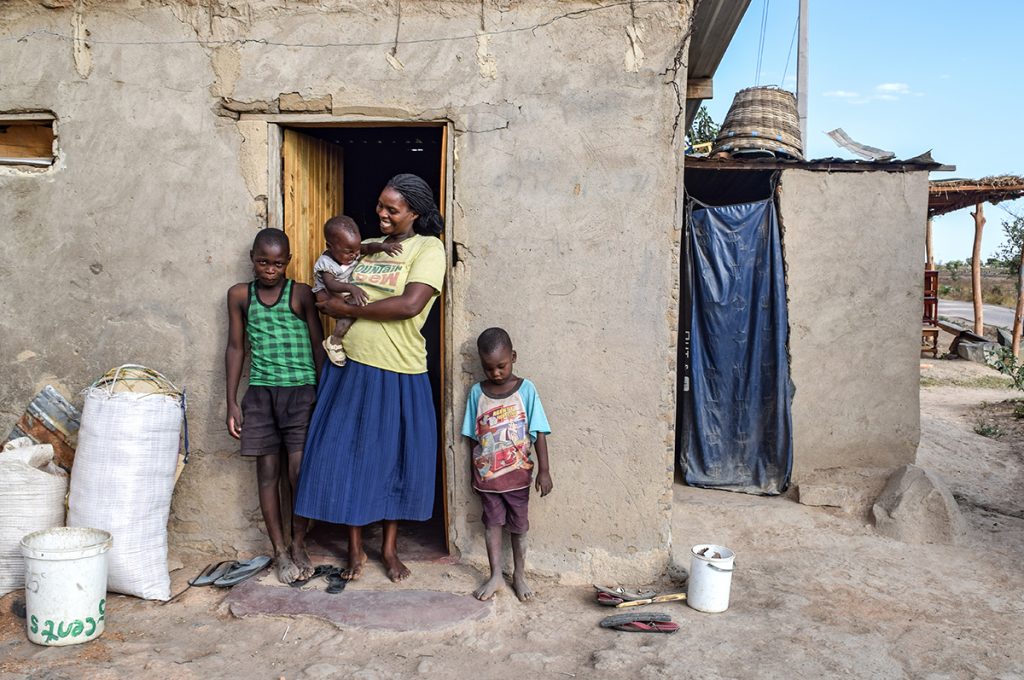 Liana Kaviva and her three children stand outside their house in Hopley Farm. They have been living here for more than three years. 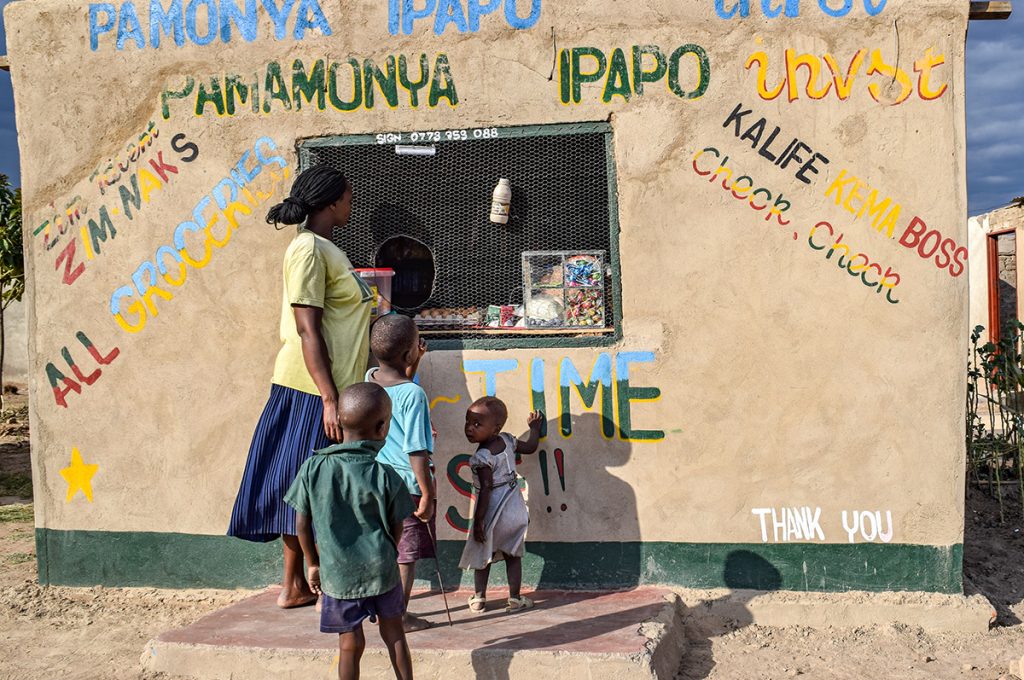 Liana Kaviva shops for ingredients for lunch with her two youngest children, at a corner store in Hopley Farm. The child in the foreground in a green shirt is not her child. 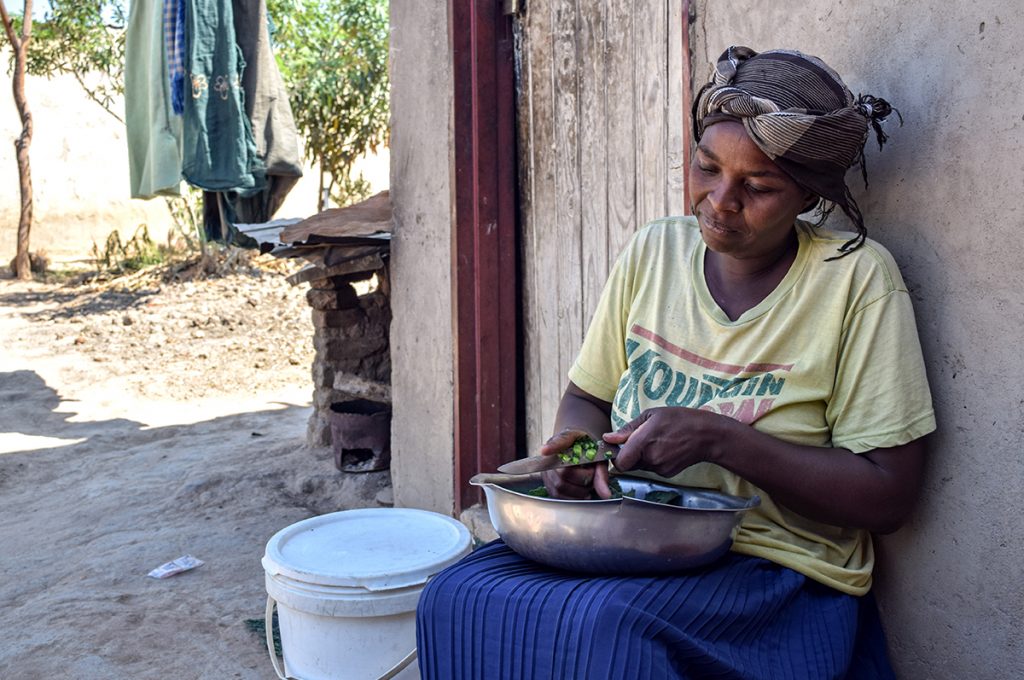 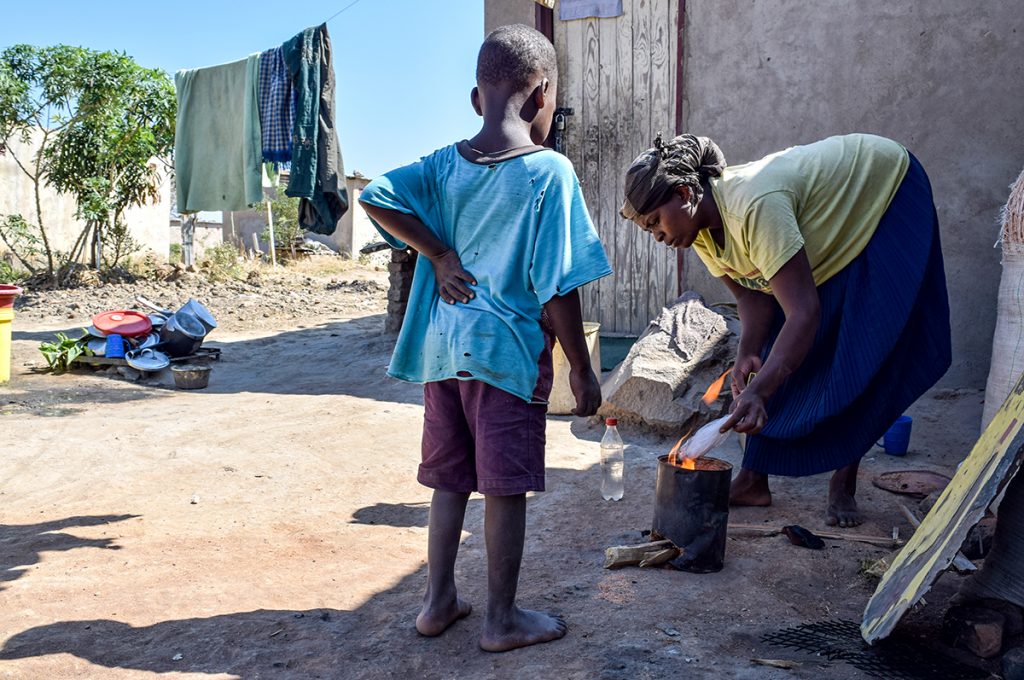 Liana Kaviva lights a fire using wood and sawdust, to cook her meal. 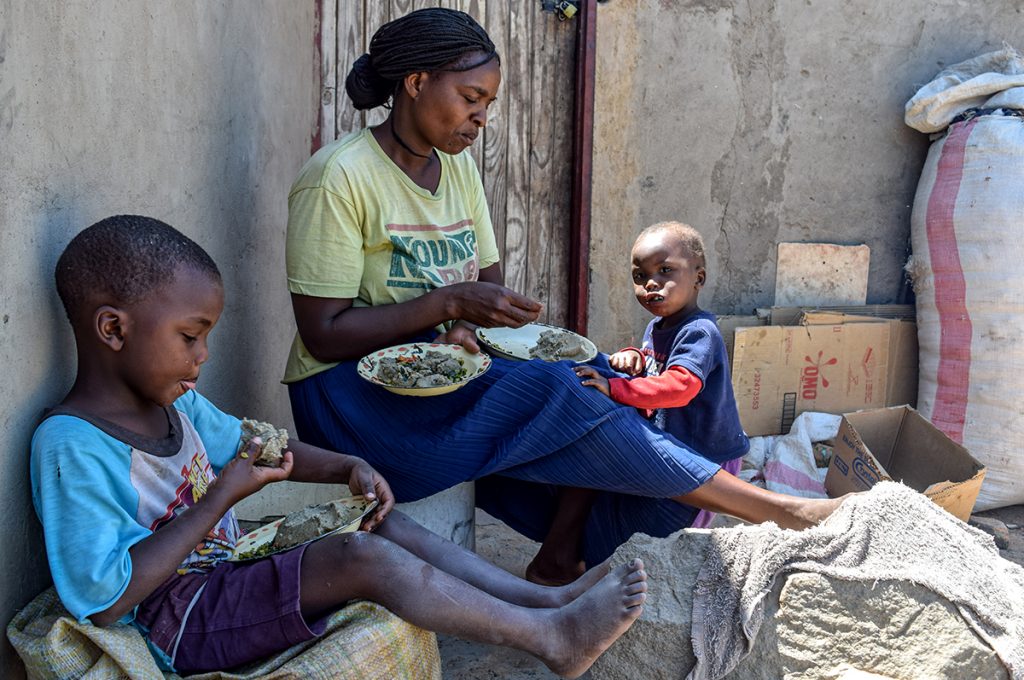 Liana Kaviva and her two youngest children, Russel Musarurwa (left) and Shantel Musarurwa, eat lunch outside of their home.

But Blessing Siziba, who has been living in Hopley Farm since 2012, says the delay in improvements is causing many to become more vocal. She says she was given the land where she’s built her house by a member of the Zimbabwe African National Union-Patriotic Front (ZANU-PF), the ruling party. Before that, the 32-year-old party supporter was renting in Machipisa, a high-density suburb of Harare. Siziba says that her property, though free, is small and that living in Hopley Farm is hard.

“We do not even have house addresses or documents to prove that we own the stands we are living on,” she says. “We have to rely on home wells that are also located near septic tanks, because we have no option.”

Simon Khaya Moyo, a spokesman for the ZANU-PF, acknowledges the difficult living conditions in the settlement and says the party is not distributing land.

“We have the Ministry of Lands and Rural Resettlement, which allocates land,” he explains. “If there are instances where land was distributed, then they are illegal.” Such cases must be reported to the police, he adds.

Nhekairo says the City of Harare developed a settlement-layout plan, which was approved by the Ministry of Local Government, Public Works and National Housing in 2017, to improve living conditions in Hopley Farm. 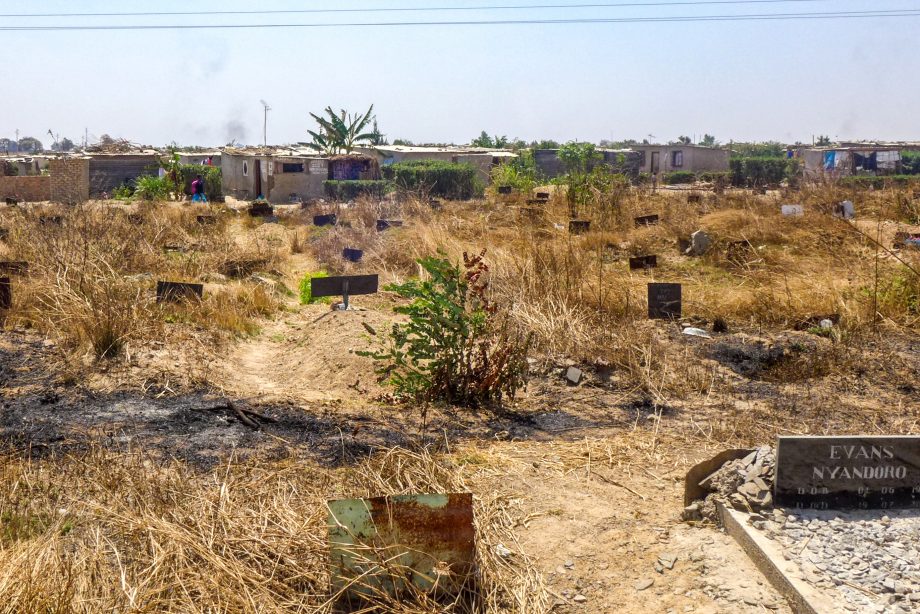 Overcrowding in Hopley Farm has pushed residents to live close to graveyards.

But formalizing Hopley Farm is not an easy task. Some residential stands are located in parts of the settlement where the City of Harare hopes to build new structures and services.

Large-scale improvements also require money. Nhekairo says the City of Harare currently does not have enough money for all of its intended improvements because some taxpayers in the capital have not paid what they owe, while a majority of Hopley Farm residents don’t pay taxes at all.

But Shumba says that relying on taxpayers outside of the settlement to fund the developments is improper. The City of Harare does not provide garbage-collection services to Hopley Farm, but there is an elected representative for the area, who is paid by taxpayers from other wards, he says.

“The City of Harare is depriving other ratepayers of their needs, as they try to accommodate people who were settled haphazardly,” Shumba says.

Land for housing should be allocated by the City of Harare, he says.