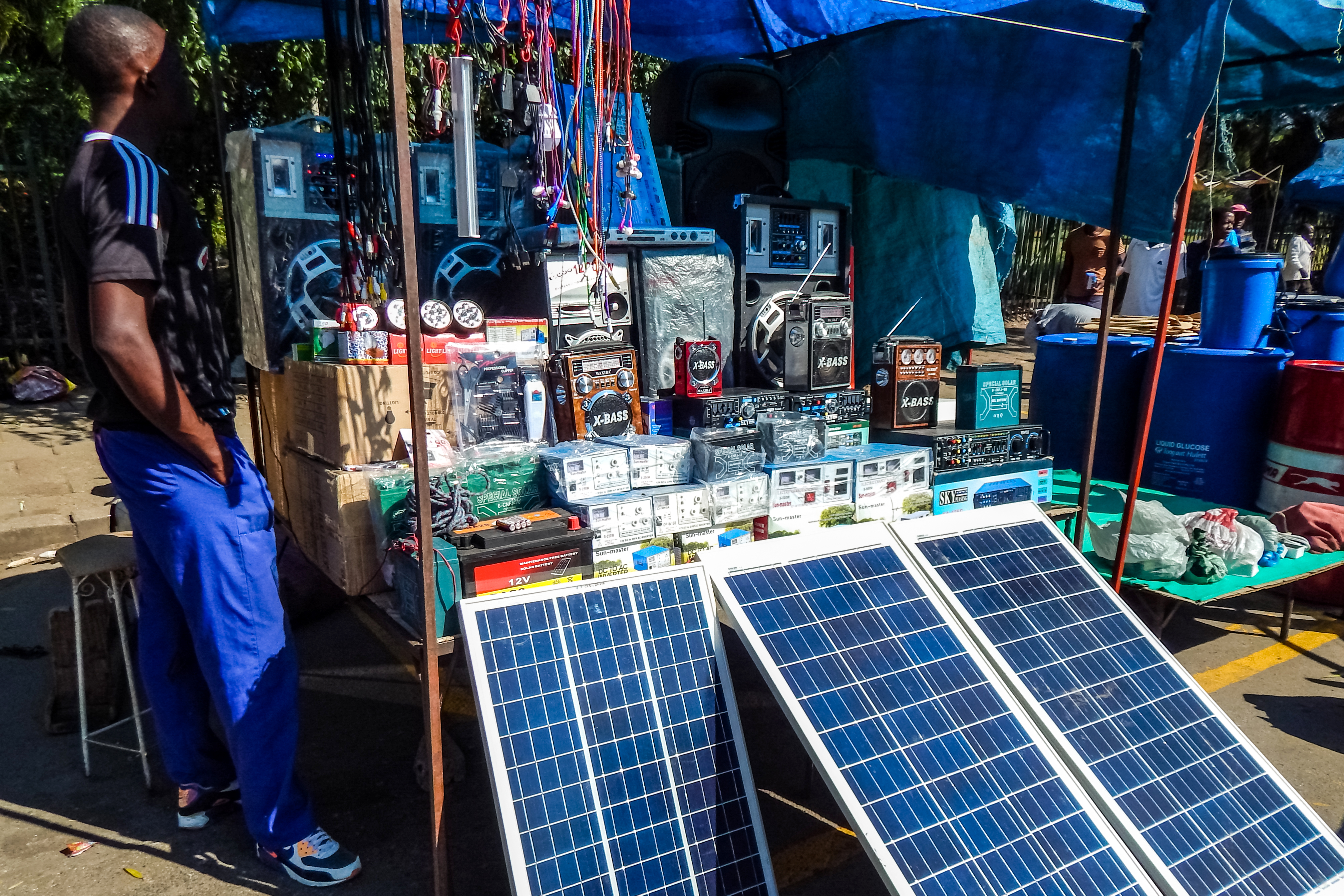 BULAWAYO, ZIMBABWE — Bekezela Mlambo rushes around her home, preparing to take a bath before work. She’s already late, but her morning routine used to take even longer.

“I am glad I decided to put a solar water heater in my house,” she says. “Before that, I would have to warm my water on the stove using a watering can, and that takes time.”

Before Mlambo installed a solar water heater in her home, she found herself using not only more time, but more electricity. Sometimes, she’d boil water on her stove and forget about it or decide to bathe later, and then she’d have to light the stove again.

“Regularly switching on and off the stove wastes electricity, especially when one is using prepaid electricity,” she says.

In Zimbabwe, customers use prepaid electricity by buying credit ahead of their usage. If customers run out of credit by using more electricity than they paid for, the power shuts off. 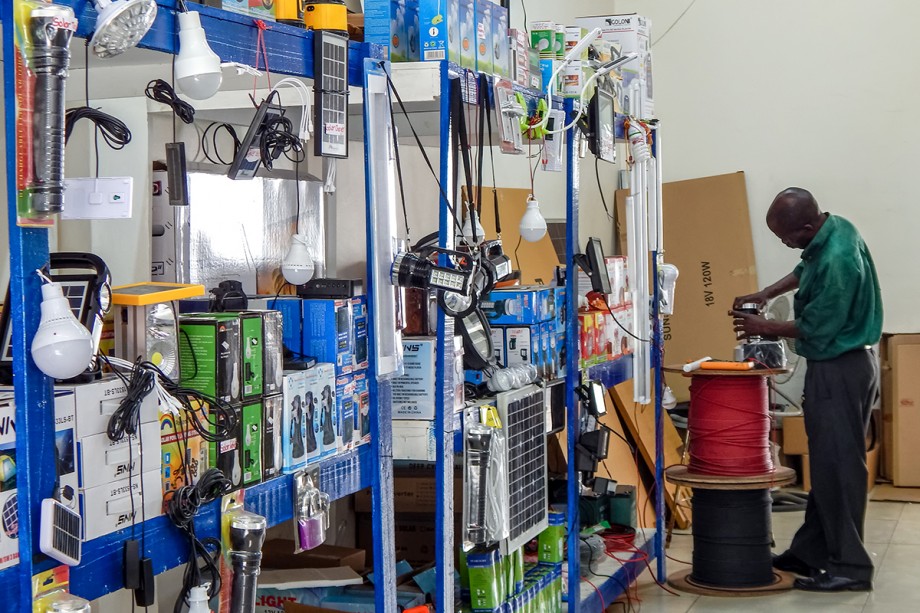 A shop in the Bulawayo Central Business District displays solar appliances. Such shops have popped up throughout the city, as more residents look to save money on their home energy bills. Zimbabwe gets an average of 3,000 hours of sunlight per year, so solar energy is an abundant resource.

Since this payment model was introduced in 2012, residents have become more concerned with their energy use at home; Mlambo is one of the many Zimbabweans who have started using solar power to reduce their energy bills.

Use of solar power in homes is growing little by little across Zimbabwe: The 1998 National Energy Survey by the Zimbabwe Electricity Supply Authority found that some 80,000 rural households used home solar systems, but that number has grown to an estimated 113,000 systems, according to a 2016 report by the International Renewable Energy Agency. And Bulawayo businesses that sell solar panels say their sales are increasing, too.

Solar energy is simple: Panels trap rays of sunlight that are converted into energy for electricity. This kind of energy is efficient, too – solar water heaters reduce energy consumption by 40 percent, says Tobias Mudzingwa, an engineer with the Zimbabwe Energy Regulatory Authority.

Zimbabwe is uniquely positioned to take advantage of solar energy, because the country receives an average of 3,000 hours of sunshine per year. That natural energy resource could address a larger problem – according to a 2017 renewable energy report by the Netherlands Enterprise Agency, Zimbabwe’s electricity grid is “in a poor state,” and the country has to import power from neighboring Mozambique and South Africa. In rural areas, only an average of 21 percent of people have access to electricity at all.

In 2015, the government launched a solar energy campaign with the aim of cutting residential power usage by 40 percent. Installing solar water heaters in homes could be a means to that end. According to a 2012 energy policy paper by the Ministry of Energy and Power Development, there are 250,000 to 300,000 geysers – water heaters – in households in Zimbabwe; switching those geysers to solar would save hundreds of megawatts of electricity. 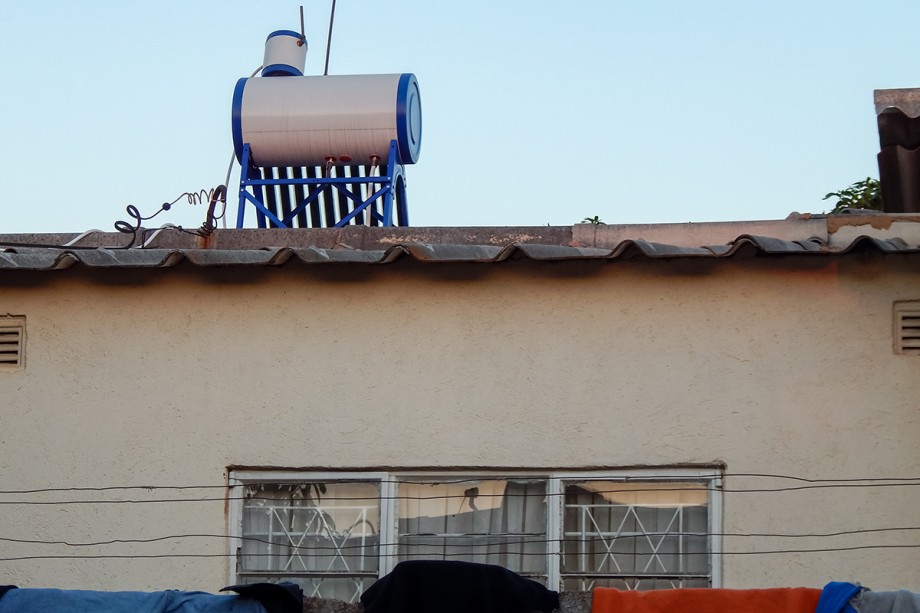 The roof of a home in the Luveve suburb of Bulawayo is equipped with a solar water-heater tank. While installation can cost a few hundred dollars, some residents say that the eventual electricity cost savings are worth the investment.

Solar geysers would spare the country from paying more for the power imported from neighboring countries, says Simon Khaya Moyo, the minister of energy and power development.

For now, power usage is going solar one household at a time. Residents who use solar in their homes say the initial costs of installation are quite expensive, but the long-term benefits outweigh the costs.

Mlambo says she had her solar water heater installed for about $350. One of the best things about it, she says, is that she doesn’t have to wait for the water to heat up.

Solar panels cost between $50 and $150, depending on size, says Reuben Nyathi, a salesman at a local shop called The Real Solar.

“Business in the urban area has improved,” Nyathi says. “Initially, most of our customers were from the rural areas, but we now have clients in urban areas.”

Mirriam Sibanda, a resident of the Cowdray Park suburb, has been using solar power for her lights, television and radio, as well as for bathing water.

Sibanda says she used to pay around $60 a month for electricity, but with solar she pays $20.

Fortune Moyo, GPJ, translated some of the interviews from Ndebele.

Fortune Moyo, GPJ, and Simon Khaya-Moyo are not related.