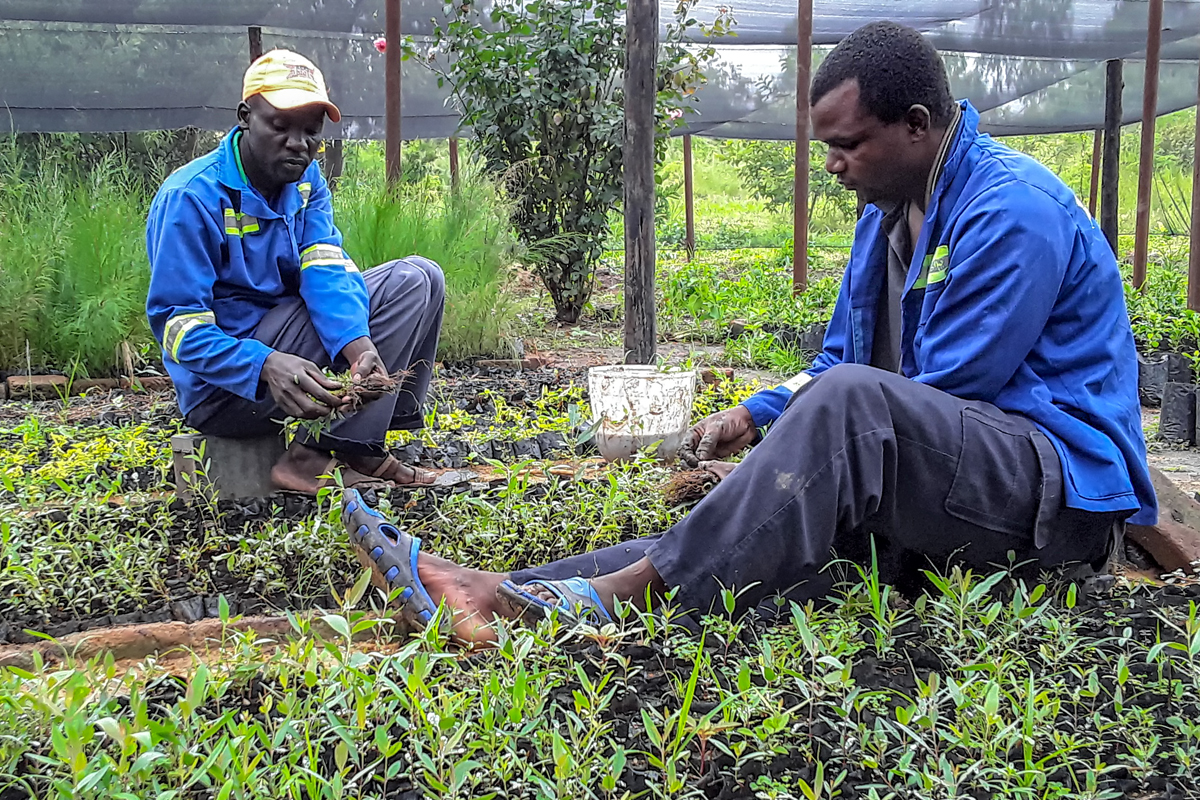 MOUNT DARWIN, ZIMBABWE — “When I realized my parents could no longer afford my fees, I was stuck here at school with no money to go home and no place to stay,” Aldin Moyo, a secondary school student, says.

He was left unable to attend classes for a few months, says Moyo, who is in his last year of secondary school at Madziwa Primary and Secondary School in Mount Darwin, a town in northeast Zimbabwe.

But sales at the on-campus tree nursery allowed him to return to school. Tree sales support students whose families cannot pay the $60 academic-term fee.

The nursery is one of 17 across the country planted in 2013 by members of Friends of the Environment Zimbabwe (FOTE), a local nonprofit. These tree nurseries, sometimes stocked with rare, indigenous trees, are designed to encourage reforestation in local communities where they’re planted and to improve quality of life, members of the nonprofit say.

In Zimbabwe, many rely on forests for their livelihoods. Some cut down trees to use the bark as a source of energy for cooking, while others use trees for tobacco curing, one of the country’s more lucrative businesses. Local experts say this has contributed to mass deforestation and land degradation.

Each year, Zimbabwe loses an estimated 330,000 hectares (815,100 acres) of forests, according to a 2014 report from the Environmental Management Agency, a government agency responsible for managing natural resources and protecting the environment. Indigenous trees are also becoming harder to find because of deforestation, local experts say. 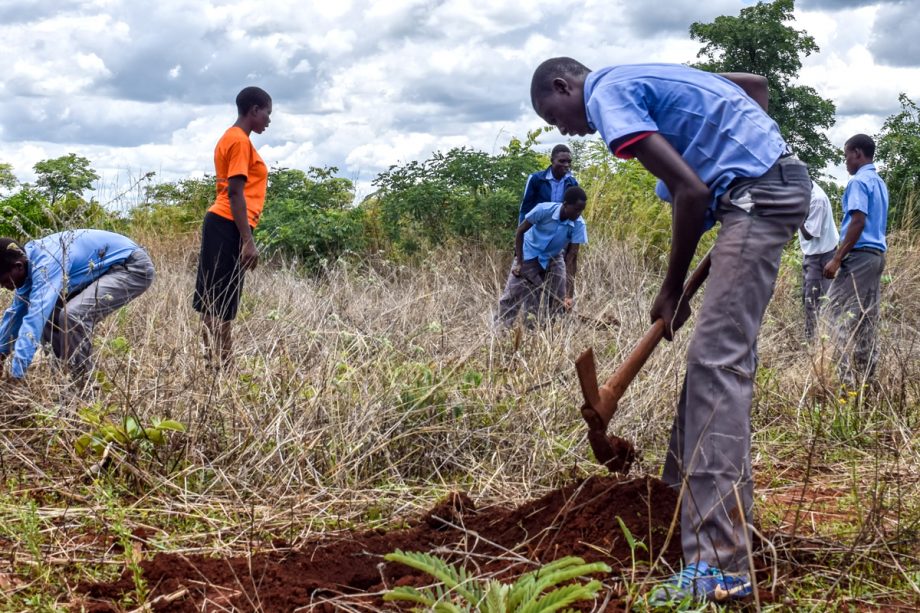 Students from Saruwe Secondary School in Selous, a village in Mashonaland West province, Zimbabwe, prepare to plant trees at the on-campus nursery. It is one of 16 schools where the local nonprofit Friends of the Environment Zimbabwe has created nurseries.

While the government is making efforts to reduce deforestation, nonprofit organizations and local communities are also addressing the environmental challenge. Since 2010, FOTE has been hosting annual walkathons to raise awareness of deforestation. Each event takes place across a stretch of different communities, often in rural areas. It costs $20 to join the walkathon, in which participants help members of the nonprofit and of local communities plant trees along a designated route and at a nursery in the community where the walk ends.

Participants in the most recent walkathon in November traveled 167 kilometers (104 miles) from Harare, Zimbabwe’s capital, to Mhondoro Ngezi, a rural district southwest of Harare. The walk lasted four days, and roughly 100,000 trees were planted.

Madziwa Primary and Secondary School, with an enrollment of about 660 students, is one of the beneficiaries of the nonprofit’s initiative. Augustine Moyo, project officer at the nonprofit, says his organization plants nurseries at schools because students can help to take care of the trees and learn to protect their environment. Sixteen of the 17 nurseries planted by FOTE during the past eight years are located on school campuses. The other, planted early this year, is at a military base in Harare.

“A school is the most frequented place for learning and acquiring new skills and traditions,” he says. “The whole point of coming to establish at schools is to teach the next generation how to preserve the environment for future generations.” 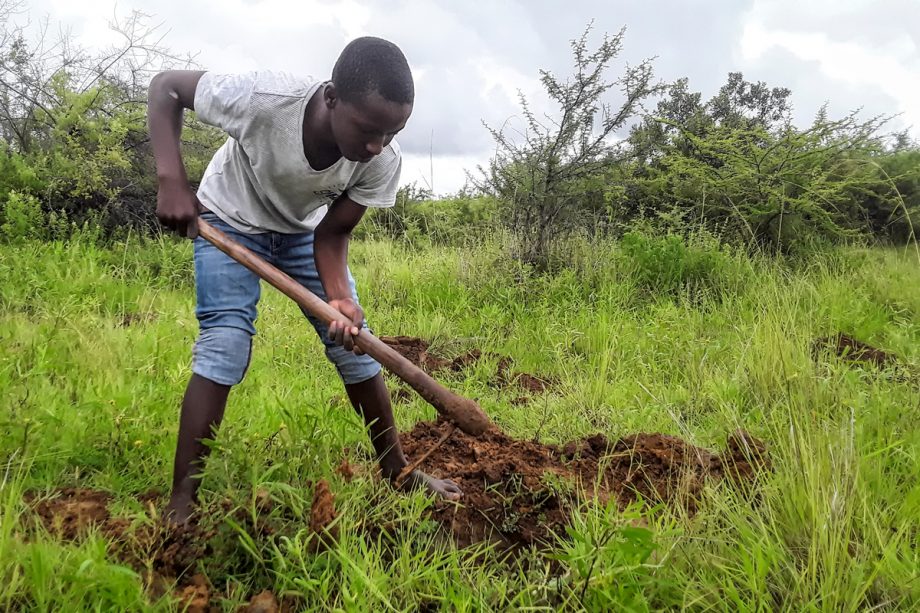 Aldin Moyo, an 18-year-old student at Madziwa Primary and Secondary School, digs a hole in the soil to plant a tree on the school's campus in Mount Darwin, Zimbabwe.

Aldin Moyo, who comes from Kadoma, a city 294 kilometers (183 miles) from his school, says he is one of many students who are learning to take care of trees at the nursery. He helps at the nursery twice a week after his classes.

“I have a tree I named that I water,” he says. “I also learned how to plant and treat trees, soil proportion and care for trees. I enjoy helping out at the nursery.”

Augustine Moyo says sales made at the nurseries are also a way to support members of the local community. In most cases, students reap the benefits, with improvements to school infrastructure or assistance to cover their fees, he says.

In Zimbabwe, dropout rates among secondary students are high, due in part to an inability to afford school fees. Similarly, some students do not enroll in secondary school because they cannot pay the fees. In 2014, an average of 41 percent of children ages 13 to 18 – the age range for secondary school students in Zimbabwe – were out of school, according to the Education Policy and Data Center, a division of the international-development nonprofit FHI 360. For years, Zimbabwe’s crippled economy has made it difficult for many to find employment to support themselves and their families.

Aldin Moyo’s parents have never been formally employed, he says. His family survives on money his parents make from infrequent, low-paying work.

“They do whatever they can to survive. Things are hard,” he says. But the nursery was planted just in time for him to complete his secondary education.

“I am set to write my final exams this year,” he says. “I am grateful that I get to finish school.” 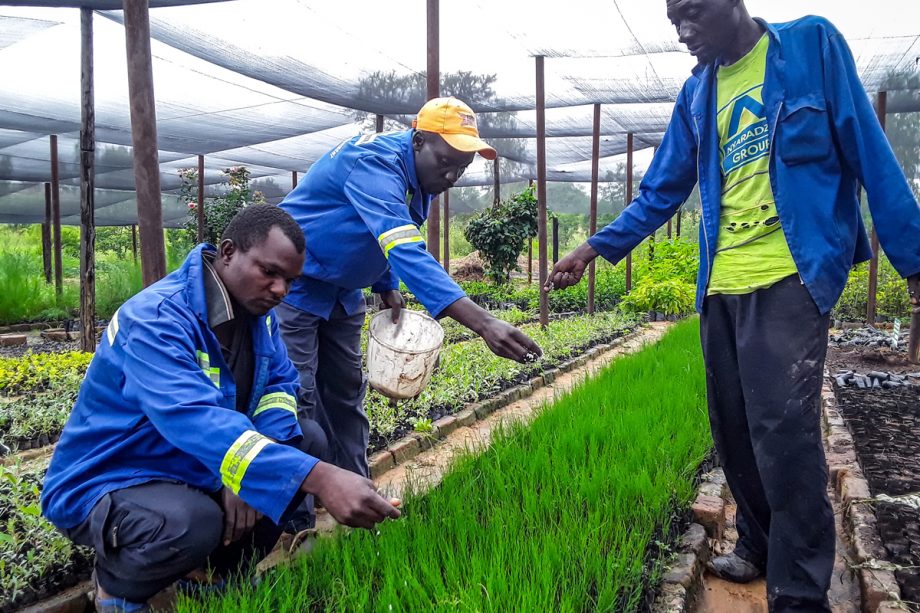 Staff members at Madziwa Primary and Secondary School's tree nursery in Mount Darwin, Zimbabwe, sprinkle saplings with a fertilizer to help promote growth. Saplings are provided by Friends of the Environment Zimbabwe, a local nonprofit.

The nursery at Madziwa Primary and Secondary School stocks guava, mango and avocado saplings, among others, costing $1 to $3 per sapling. Some of the regular customers are farmers, says Masango Chunga, the school’s principal.

“We bought 96 chairs and 12 group tables for the library, and we have managed to pay fees for schoolchildren who cannot afford their fees,” he says.

“So far, three boys have completed their studies and written their exams thanks to the proceeds from the nursery” during the past three years, he says.

Chunga says his administration hopes to keep more students in school using funds from the nursery. Staff members are identifying students whose families struggle to pay fees each academic term, he adds. Madziwa Primary and Secondary School will soon have an orchard as well, thanks to business from the nursery, he says.

Aldin Moyo and Augustine Moyo are not related.

Correction: An earlier version of this story misidentified the surname of Augustine Mukaro. Global Press Journal regrets this error.