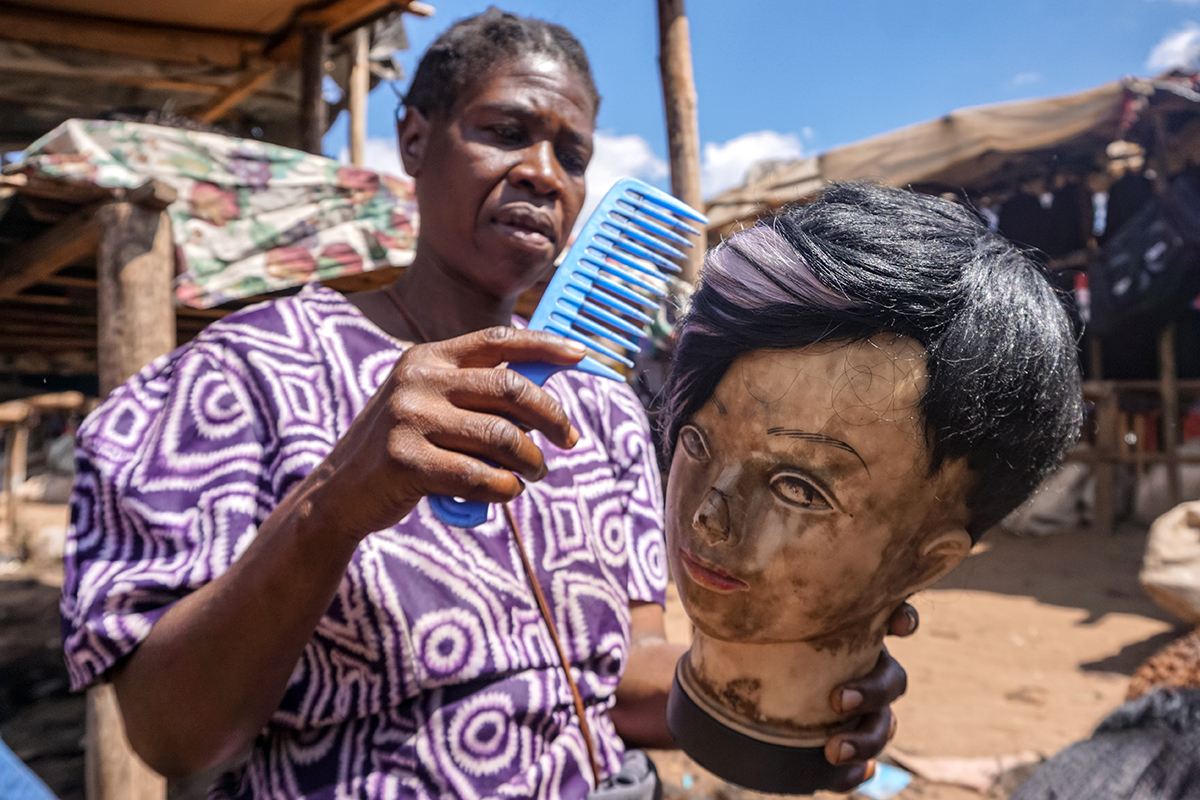 HARARE, ZIMBABWE — Jean Kasumba begins her morning ritual by lining up the three wigs she’s collected in the past year. She quickly shifts her gaze from a currant-colored bob to a black, shoulder-length number with a side-swept bang, the most recent addition to her collection. She’s got a tough decision to make, she says while examining the last wig, honey blonde in color.

“My overall dressing has to be in tandem with my hair,” Kasumba says.

A ready supply of wigs allows the busy clothing saleswoman to sport a new hairdo as often as she’d like, she says. It’s affordable, too. Each of her wigs are custom-made and cost her between $10 and $15, about half of what she would have to pay to have extensions sewn into her cornrows (hair braided very close to the scalp), she says.

Wig-wearing isn’t new to many women in Zimbabwe, but the change is in the types of wigs that they’re buying. Handmade from used, synthetic hair extensions, the cheap wigs offer versatility and convenience to their owners and offer an income to the women making them. 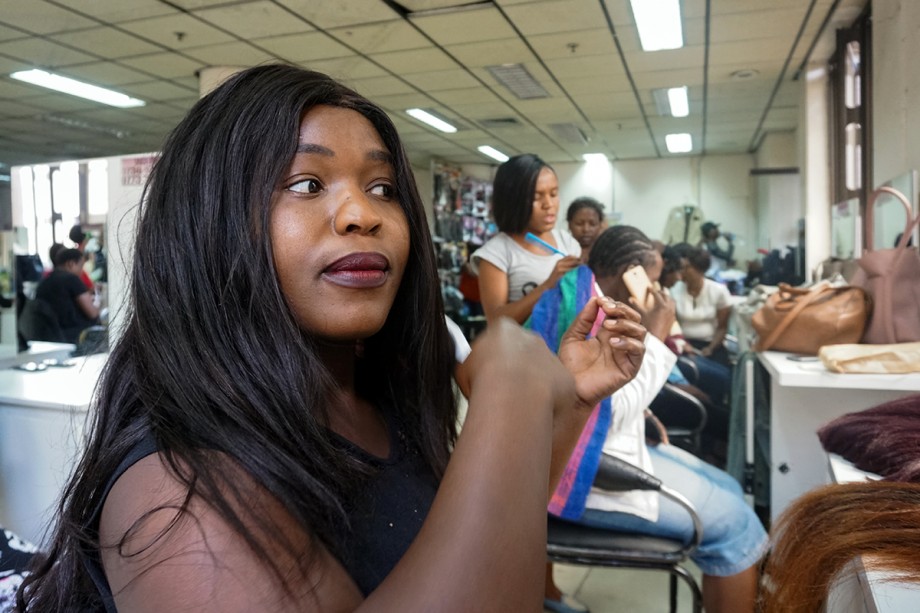 Jean Kasumba puts on one of the three wigs she owns, before going to work. Kasumba says the wigs don’t require much styling.

Zimbabwe’s hair industry is worth thousands of dollars, according to the Zimbabwe National Statistics Agency, and is run by a network of hairdressers, traders in beauty products and importers.

In 2016, Zimbabwe’s authorities imposed import restrictions on more than 30 types of goods, in a bid to increase local manufacturing, and synthetic hair products made the list.

Despite the government move, hair salons and markets across the country continue to carry synthetic hair extensions and wigs in numerous colors, lengths and textures. Many of these wigs are machine-made, says Marcilline Takaidza, who works as a hairdresser in Harare, Zimbabwe’s capital. But only a limited number of hair lovers can afford these wigs, which are priced at $150 and up, she adds. A decade of economic turmoil has left many without cash or jobs.

But the women behind Kasumba’s growing collection of handmade wigs say that the sputtering economy hasn’t stopped them from making money. The demand for their products is high. 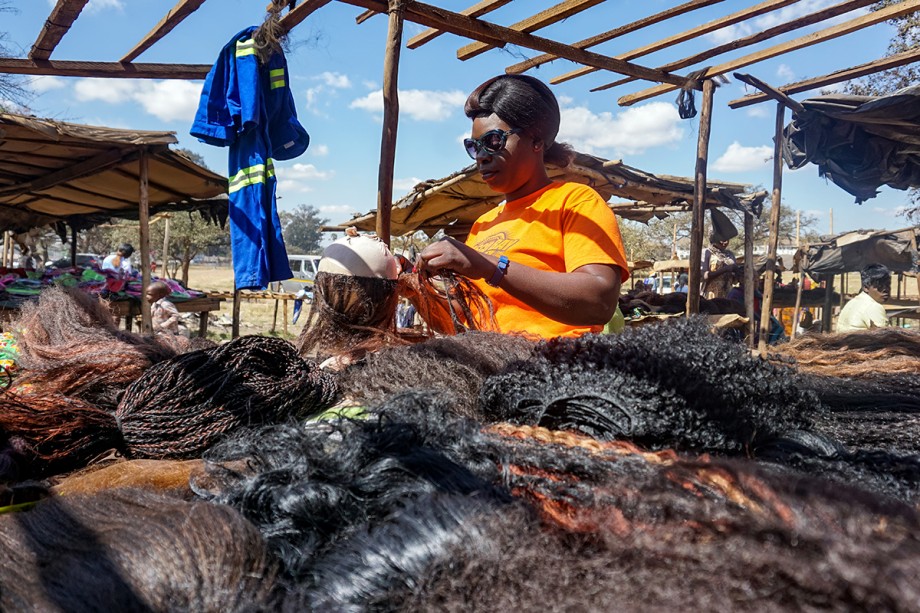 Faina Kambeta, who has been a hairdresser for more than four years, belongs to a growing group of people in Harare who are repurposing used hair extensions.

Faina Kambeta has been a hairdresser for more than four years but only started making wigs recently, when she noticed the success of local wigmakers. In Mbare, a township of Harare, she’s joined the dozens of roadside wig gurus, who are making hair-conscious consumers an offer that they can’t resist. Along the street where she sells her creations, she says that the most expensive wigs are $15.

“I sell them from $5 each, and the price is negotiable,” she explains while sewing hair extensions onto a piece of an old stocking. After sewing several pieces onto what is now a wig cap, she stops to brush the hair to make sure that it does not tangle. “It can go down to $3, depending on the customer’s ability to negotiate,” she continues.

What makes her wigs so cheap is the type of hair that she uses, she says. Kambeta gets used synthetic hair extensions from salons in the Central Business District for $1 or $1.50, and she says it’s usually enough to make one wig.

Kambeta makes up to six wigs daily and sells half of them by the end of the business day. She says a lot of people wear wigs because they do not want to spend too much money and time having their hair done in salons. 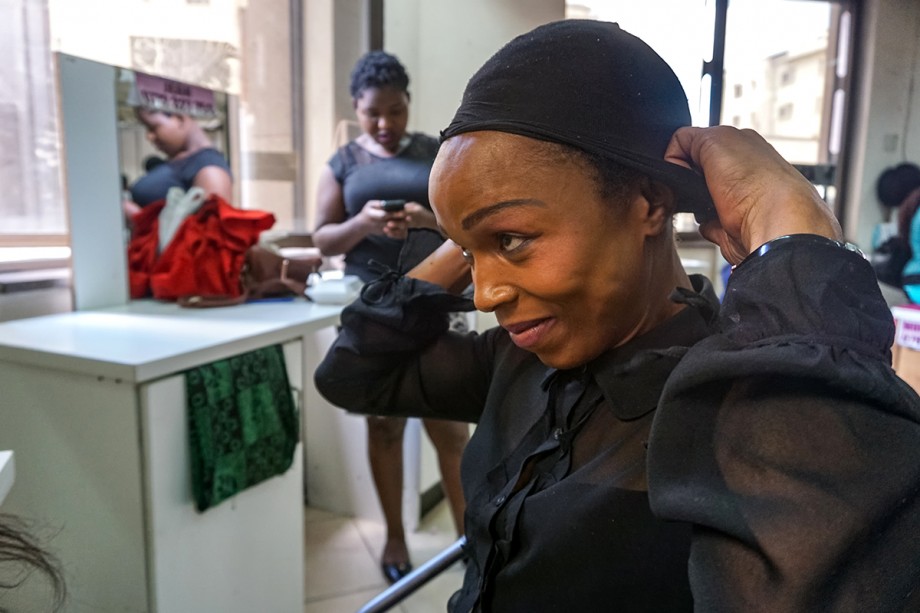 Audrey Chaukauya puts on a wig cap before trying a wig at a Harare hair salon.

At a stall nearby, Nothando Chandinofira sorts through a pile of hair extensions. She says the handmade wigs have become particularly popular during the past year.

“There are now a lot of people in the business of making wigs,” she says, adding that wigmakers are scrambling to get the used hair extensions from salons. “Sometimes we fail to get these used weaves; at times, others resort to finding weaves at dump sites.”

At Takaidza’s hair salon, clients who no longer want to use their hair extensions leave them behind, and the hairdresser saves them for wigmakers.

On any given day, as many as five wigmakers come to buy hair from Takaidza.

Catherine Nhau says the wigmaking business has enabled her to take care of her family. Her wigs cost between $3 and $6, depending on the length and style.

“When my husband died, l was looking for a way to sustain my family, and wigmaking and hairdressing was a way l found in order to survive,” she says. 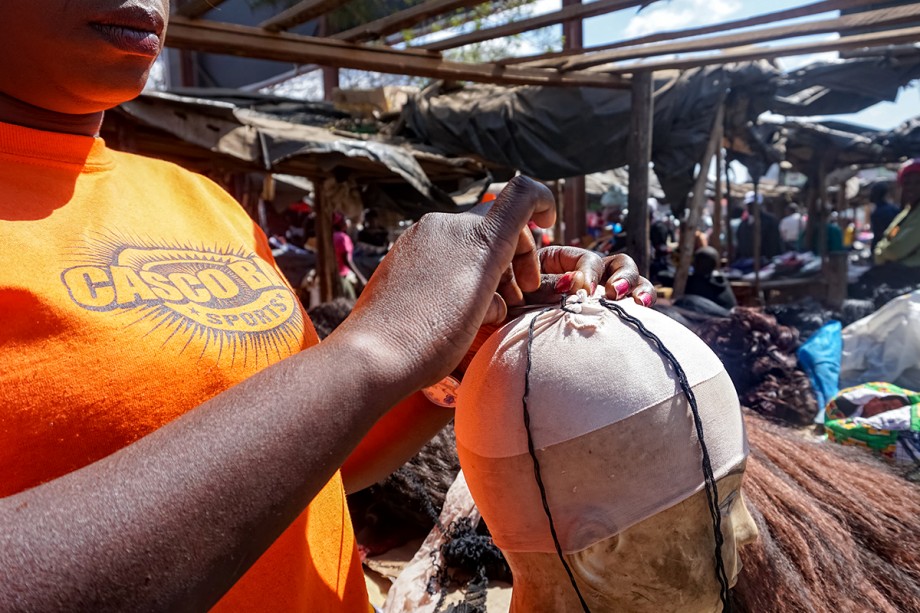 Faina Kambeta makes a wig from used, synthetic hair extensions, at her roadside stall in Mbare, a township of Harare.

At times, Nhau makes wigs per clients’ requests and sells them for the same price as the ones she makes every day.

“Hairstyles are always evolving,” Nhau says. “What might be trendy today, might not be trendy a few years later.” But Nhau says these handmade wigs will continue to rise in popularity, because they are a low-cost beauty solution.

Melody Kangutu says she prefers handmade wigs to the machine-made wigs that Zimbabwe’s beauty supply stores have had for years.

“The wigs are affordable such that l own three of them. The good thing about these wigs is that you can specify the style you want and have it made the way you want it,” she says.

Kangutu got all three wigs from the same person.

“l have a regular person that l buy my wigs from, because, at times, other people do not make wigs that are durable, and you can end up buying something that you won’t use for a long time,” she says.

Kangutu has had her three wigs for more than six months and hopes they’ll last for a year.

Linda Mujuru, GPJ, translated all interviews from Shona to English.