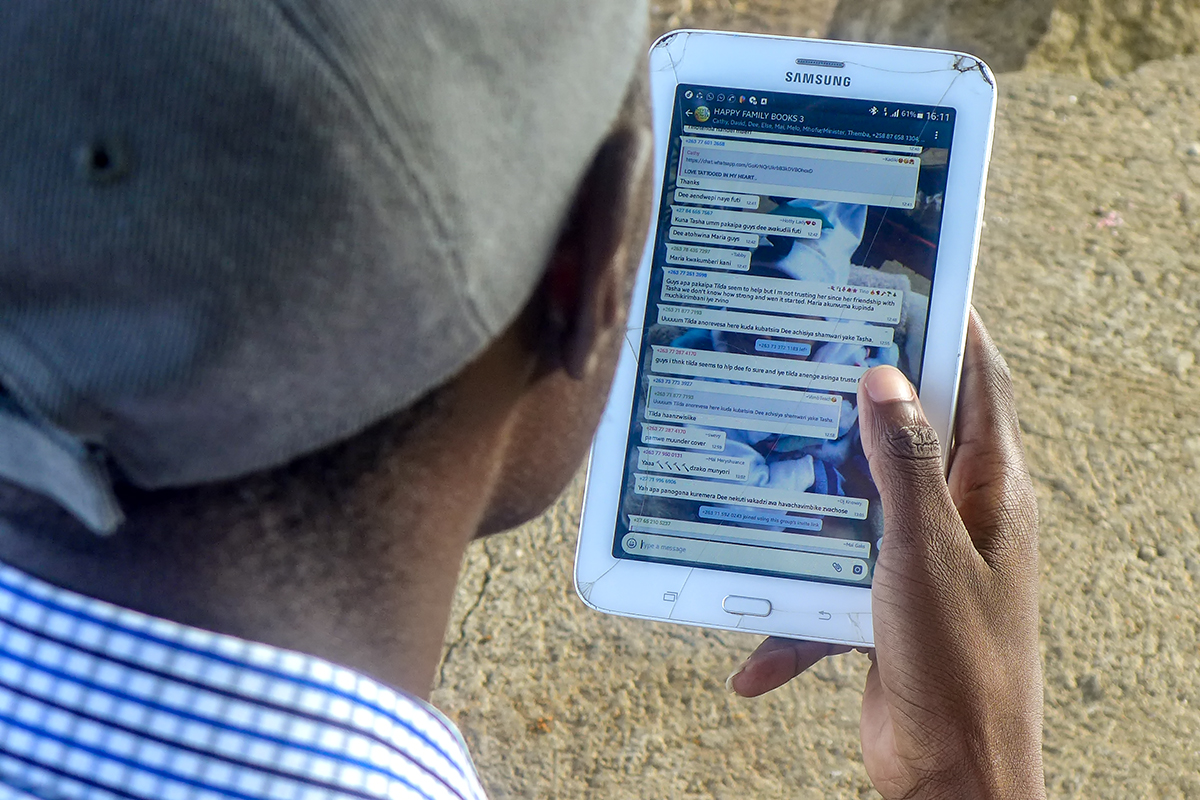 HARARE, ZIMBABWE — After 15 years of trying to conceive a child, Alice Gochayi was overwhelmed with frustration. One day, she took to Facebook to vent. She wrote a stream-of-consciousness post about a woman in pain.

“I just wrote the post with no intentions, but my Facebook friends liked it and started sharing it and commenting. I had to finish it. That’s how I started writing novels,” she says.

A year later, Gochayi finally had a baby.

Today, she writes chapters of her novel from a flea-market stall in Harare’s Central Business District. As her baby, Tapiwanashe, sleeps, she shifts her attention to her phone, where she posts the chapters of her book to Facebook and WhatsApp. She has more than 3,000 followers on Facebook and charges $1 a month to read her work on WhatsApp.

So far, Gochayi has 10 books to her name, all of which are published online and focus on themes of love, marriage and betrayal.

Gochayi is among a growing group of fiction writers in Zimbabwe who publish their work on social media platforms, because purchasing books has become expensive, and traditional reading culture in the country is declining. 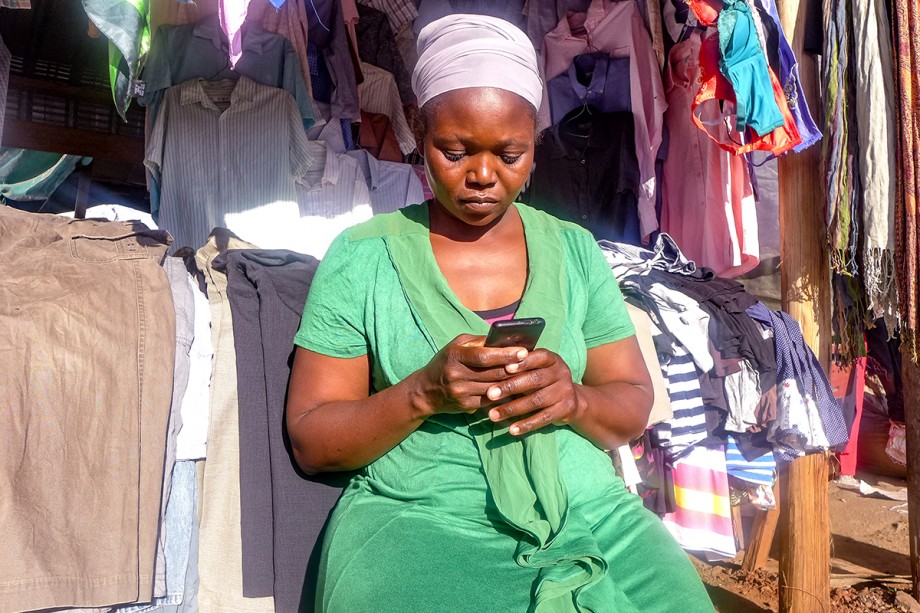 Alice Gochayi has published 10 books on Facebook and WhatsApp. She used a painful experience from her life as inspiration for her writing. She continues to write as she works at a flea market in Harare, Zimbabwe.

As readers respond to this trend, conventional writers who debut their books via publishing houses say they’ve felt the pain of weak sales.

“Our sales have gone down because people who read books now are very few,” says Aaron Chiundura Moyo, an award-winning Shona novelist. “It’s because of technology, I think. Reading culture is low everywhere.”

“People nowadays only read when they really, really have to, and not for the joy of reading or as a hobby,” says Kawengo Samachai, another conventional author in Zimbabwe. He says he used to earn enough from writing to support himself for a couple of months, but that’s no longer the case.

According to a paper published in the Journal of Advances in Linguistics, Zimbabwe has one of the highest literacy levels in Africa.

“Paradoxically, such an encouraging state of affairs is not paralleled with a high reading culture,” it states. “Instead, the high levels of literacy are undone by a very low reading culture.”

The cost of accessing literature is partially to blame, according to the paper. Physical books in Zimbabwe can be very expensive—Global Press Journal recently observed that a biography of popular local musician Oliver Mtukudzi titled “Tuku Backstage” cost $55 in a bookstore in Harare’s Central Business District.

Meanwhile, access to the internet, the new frontier for emerging authors, has only grown.

While conventional authors say the social media books are of low quality, readers enjoy them for their accessibility and relatability.

From 2010 to 2016, the percentage of individuals using the internet in Zimbabwe grew from 6 percent to 23 percent. Smartphone use is also growing in southern Africa, with 24 percent of the region’s population using such phones in 2015. That figure is projected to swell to 57 percent in 2020, according to a 2016 report by the Global System for Mobile Communications.

Social media authors’ works, then, are only a click away – and cheaper.

Breggnave Sikahika co-authored a social media book titled “The Game of Love” and sold it for $2 a chapter. He’s earned close to $4,000 from the work.

His work attracts readers from all over the world. They pay him through the WorldRemit online money-transfer service or other mobile exchange systems.

“I write [the] first few chapters for free, then, when I have reached the peak of the story, I start selling the remaining chapters,” says Sikahika. “I just say to my readers, ‘I need financial support, too, so I’m now selling.’”

Like other social media authors, Sikahika writes in colloquial language, often a mix of English and Shona. He says readers prefer it this way. 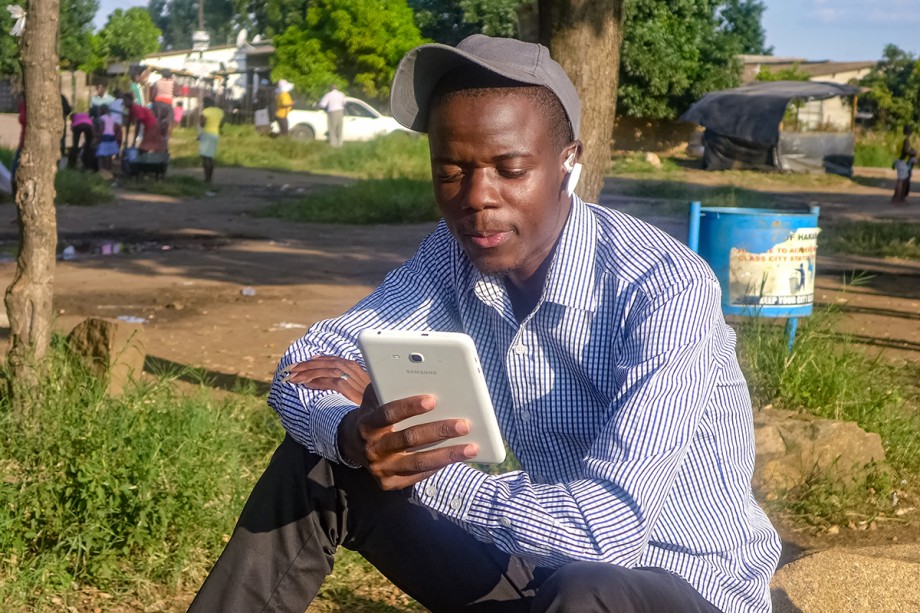 From a work he co-authored called “The Game of Love,” Sikahika says he earned about $4,000. He distributes portions of his works for free, then charges his audience to read more. Readers of social media books say they appreciate these books for their accessibility.

“This is a question of just wanting to reach an audience quickly, and they succeed in doing that,” he says.

However, Moyo continues, the quality of these works is compromised by authors mixing languages and writing less formally.

“Emergence of this new breed of social media writers is a sad development,” he says. “Any naturally born writer would feel offended by such bastardization of their once beautiful and pristine art.”

Readers, though, appreciate the online books as they are.

Rejoice Hwaru says she likes social media novels because they are cheap and relatable.

“Compared to those conventional books, these are so cheap, and they also address day-to-day issues that we face,” she says. “I feel like I relate to them. Their style is basically how people speak naturally.”

“It’s not that I don’t like hard copies; it’s just that, with these social media books, they are so easy to get,” she says. “I can have them sent to my phone anytime, and I can read them anywhere I am.”

Both Gochayi and Sikahika say they hope to advance toward conventional publishing in the near future, and they are preparing to approach publishing houses.