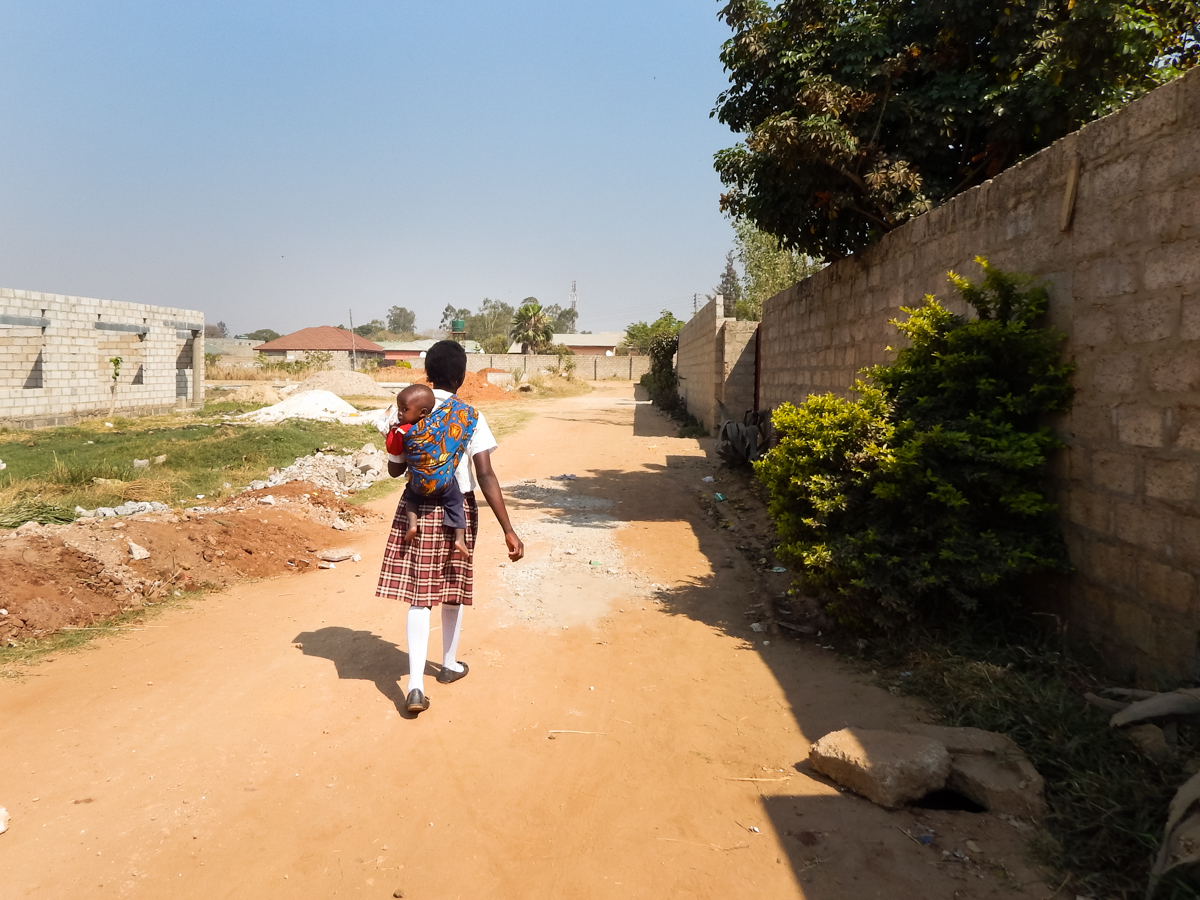 LUSAKA, ZAMBIA — It is midmorning Wednesday, and 10th-grade students in a high school classroom in Zambia’s capital stand to leave after completing their end-of-term exams.

Dorica, 17, is the last to leave the classroom.

“My uniform is messed up,” she says as she stands, quickly holding her books up to cover her chest. “I’m breastfeeding; the milk has stained my uniform.”

Dorica, who asked that her last name not be used, is one of 13 girls in the school who gave birth last year; only five returned to school after doing so.

The school is required by law to allow the girls to return, but some parents and school administrators say girls such as Dorica, just by being in school, encourage other students to get pregnant. The Zambian government says the policy has helped improve graduation rates among girls and will not be scrapped, but that hasn’t stopped opponents from fighting to get it changed. Increased pregnancy rates among students have led to a fresh wave of criticism, with parents and school officials saying the presence of pregnant girls and young mothers in schools has made pregnancy commonplace.

Zambia enacted a nationwide school re-entry policy in 1997 to improve graduation rates among girls, says Hilary Chipango, spokesman for the Ministry of Education, Science, Vocational Training and Early Education. Before then, teenage pregnancy was a chief reason for girls leaving school early because they were expelled, he says.

Some of the girls get pregnant in pursuit of education. They want someone to sponsor them, hence they sleep with men in exchange for money to pay school fees.Costern Kanchele, director of administration at the Forum for African Women Educationalists of Zambia

According to the re-entry guidelines, a girl is allowed back in the same school if she returns within six months of giving birth. Girls who return after the six-month limit can re-enroll if there is a space available for them, or transfer to another school, Chipango says. The girl’s parents and the father of the child are required to sign commitment forms saying the girl will return to school.

But some parents say girls who see pregnant students are more likely to become pregnant themselves.

William Banda, a parent of two girls ages 15 and 10, says pregnant girls should be expelled as a warning to other girls.

“Mothers need to be home looking after their babies, not in school,” he says. “What message are we sending to the young girls that are not pregnant? They think it’s normal to get pregnant since they see their fellow pupils pregnant in school uniform.”

Dorica argues that she didn’t get pregnant because she would be able to return to school.

“If you ask me, no one wishes to deliberately get pregnant just because they know that they would be back in school,” she says. “Carrying evidence that you have been having sex is not easy. There is a lot of stigma; worse is the responsibility that comes with looking after a baby.”

Statistics show that countries that do not have school re-entry policies have high teen-pregnancy rates. In Kenya, for example, where most schools expel pregnant girls, about 13,000 girls leave school each year because of pregnancy, according to the 2013 Kenya Population Situation Analysis.

The data do little to dissuade opponents of the policy from arguing that it should be rescinded. 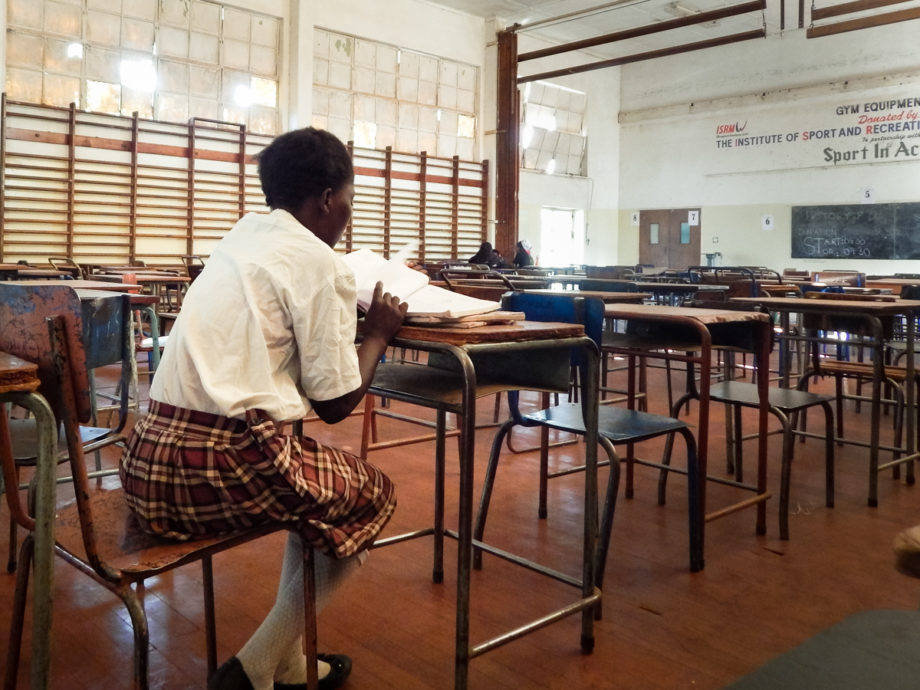 Young mothers in Zambia can, by law, return to school after giving birth, but some parents and school officials say that policy encourages teen pregnancy.

Rachael Kashoke, a parent whose daughter got pregnant twice in high school – once at 16 and again at 18 — says keeping pregnant girls in school is a waste of resources. In most cases, she says, the girls don’t perform well.

“It is difficult for the mothers to perform, especially because they are young and not ready for motherhood,” says Kashoke, whose daughter is now 19. “In most cases like for my daughter, they fall pregnant for the second time, and even when they complete school the results are pathetic.”

The deputy head teacher at Dorica’s school, who asked not to be named, agrees that the re-entry policy is wasteful.

“They are just a bad seed among those that really want to be educated,” he says, speaking of pregnant girls and young mothers. “Yes, they have been given a chance, but they don’t utilize it.”

Chipango agrees that girls who are readmitted to school after giving birth don’t perform well. That’s because they miss academic work while on maternity leave, he says, adding that parents and teachers need to create plans to help those girls catch up on schoolwork once they return.

Plus, he says, there’s evidence that the re-entry policy works. The percentage of girls completing grade 12 nearly doubled between 2007 and 2014, according to the Ministry of Education.

“I don’t agree that the policy is encouraging girls to become pregnant,” he says. “In fact, it is a good thing that girls are given a chance to be educated so that they too can educate their children in the future. Unless people say girls were not getting pregnant before the re-entry policy was established.”

Education is a human right, and no girl should be denied a right to education because she is pregnant, he says.

Costern Kanchele, the director of administration at the Forum for African Women Educationalists of Zambia, one of the organizations that lobbied for the re-entry policy, says arguments that the law is fueling pregnancies among girls are not based on research.

What drives pregnancies among girls is poverty and lack of sex education, he says.

“Some of the girls get pregnant in pursuit of education,” he says. “They want someone to sponsor them, hence they sleep with men in exchange for money to pay school fees.”

Other measures are being put in place to help girls avoid pregnancy, he says. The Ministry of Education this year added comprehensive sex education to the nationwide school curriculum. Now, sex education is taught beginning in first grade and is tailored to each age level.

“We need to educate the pupils on the dangers of sex, but as much as we teach them, some of them will still get pregnant, so the re-entry policy is a curative measure,” Chipango says.

Dorica would have had to risk taking traditional herbs to end the pregnancy.

Other programs are in place. The Forum for African Women Educationalists in Zambia established a scholarship for vulnerable students, Kanchele says. About 260 high school girls and 57 college girls are current recipients, he says. That program started in 2005, and more than 57,000 students have benefited.

Dorica says girls like herself, who have gone through the difficulty of being a mother while in school, are best qualified to advise other girls to avoid getting pregnant.

“I know the hardships of pregnancy, and if there is someone that can warn those that are not pregnant, it is me,” she says. “It is not easy to be a mother and study at the same time. Babies are so demanding; so is education.”

Dorica got pregnant in January 2014, just after graduating to 10th grade, the third year of secondary school. The father of the baby didn’t claim the pregnancy, she says.

She considered abortion, but that’s legal only when a mother’s mental or physical health is endangered or the baby is likely to have mental or physical deformities. Dorica would have had to risk taking traditional herbs to end the pregnancy.

Dorica knew she could continue with her studies after giving birth, and this encouraged her to keep the baby. Her parents supported her decision and went to school to sign her maternity-leave form. She gave birth in October and returned to school in January this year.

Although the school does not give her nursing breaks or any other kind of special treatment as a mother, Dorica appreciates getting a second chance at education.

“I used to ridicule girls that came to school pregnant,” she says. “It wasn’t until I got pregnant that I appreciated the school re-entry policy.”