Skip to main content
The story you are reading was published on Thursday April 28, 2016. To read more recent stories click here. 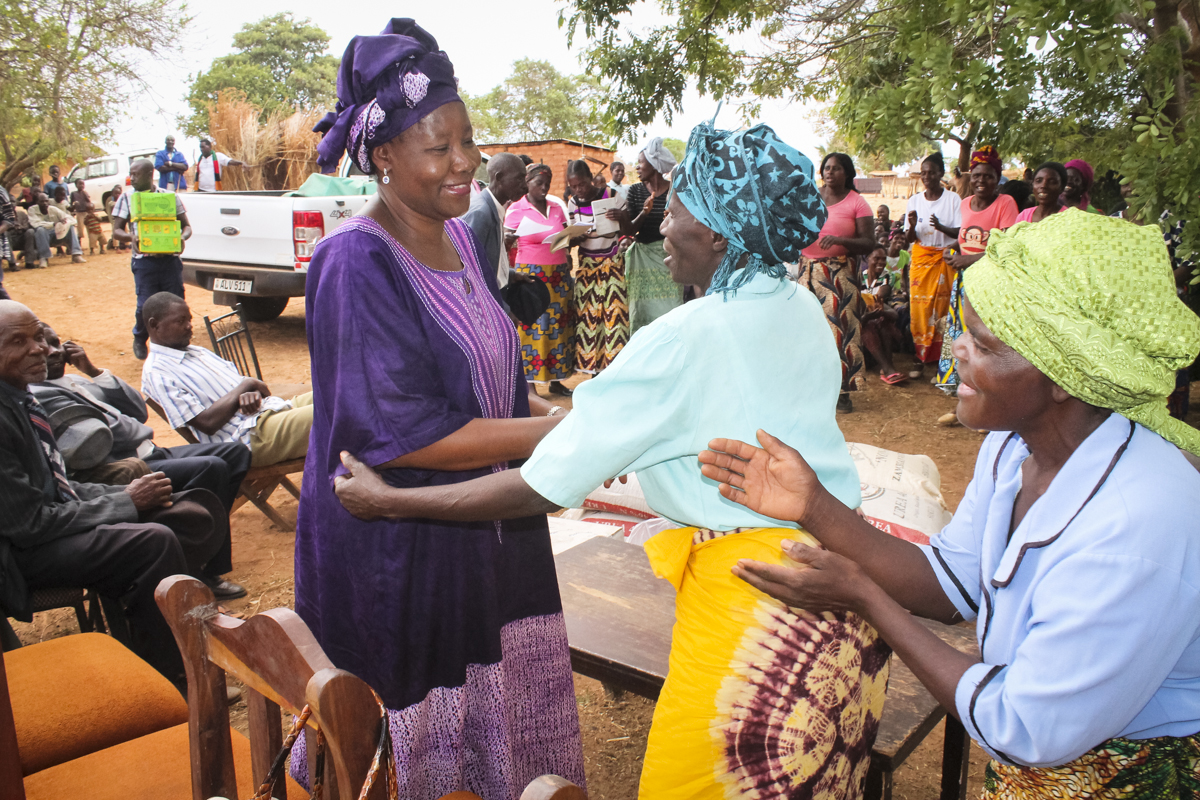 LUSAKA, ZAMBIA – When Edith Nawakwi, leader of the Forum for Democracy and Development party, stands, the people in the crowd dance, whistle and ululate.

Nawakwi, 56, joins in the dancing, then addresses the cheering crowd. She’s likely to be the only female candidate in this year’s presidential elections, and she says she hopes people will look beyond her gender and elect her to lead Zambia.

“I bring to the political arena a voice of wisdom,” she says. “People should vote for me not because of my gender but because of what I am able to deliver to them.”

If Nawakwi wins the Aug. 11 election, she will be the first female president in the country’s history. To do that, she’d have to overcome challenges she faced in 2015, when she ran in an election after the death of the sitting president. Of 1.6 million votes cast, Nawakwi took about 15,300, according to Zambia’s Electoral Commission. Edgar Lungu won that election with more than 800,000 votes, and the second-place candidate took more than 780,000. 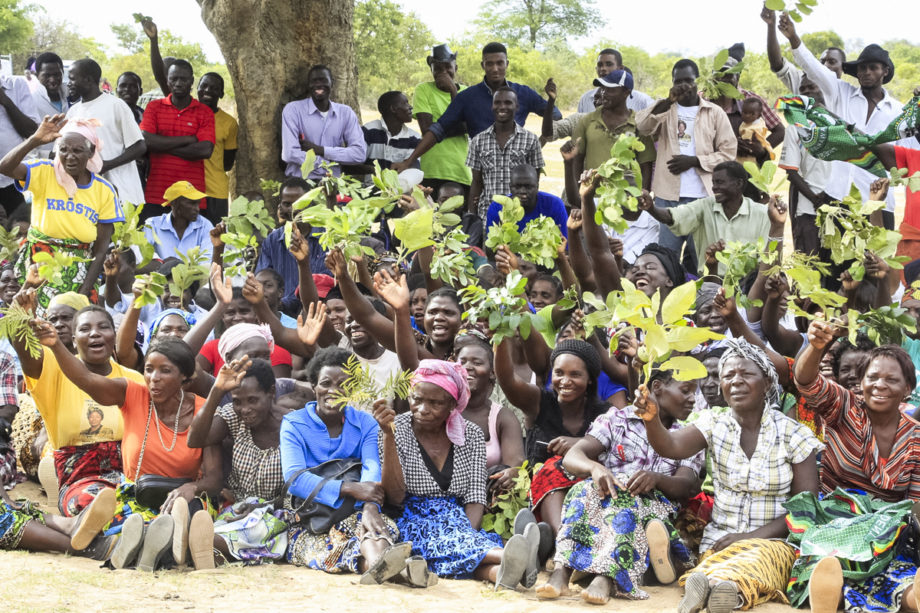 A crowd listens to Edith Nawakwi in Choma, where she went to support a start-up grants program for small-scale farmers.

Nawakwi also ran for president in 2011. She took about a quarter of 1 percent of the votes that year, the Electoral Commission reported.

That record doesn’t discourage her. Instead, Nawakwi hopes her rise in politics will inspire other women to run for political office, and that it will eliminate stereotypes that hinder women from leadership roles.

“Power by its nature, no one will give it to you,” she says. “You have to go out there and get it.”

I think Africa in general will heal the wounds of poverty when mothers become the caretakers of our governments. Edith Nawakwi, leader of the Forum for Democracy and Development party and 2016 presidential candidate

Zambia’s political arena is dominated by men. About 14 percent of parliamentarians are women. Of 25 government ministers, only seven are women. That number includes Vice President Inonge Wina, the first woman to rise to that position.

There are over 40 political parties in the country, the Ministry of Home Affairs says, though the vast majority of those parties are not active. Nawakwi’s party is the only one with a female leader.

Countries with women leaders have achieved stability and growth, she says.

“When women are in charge, they truly deliver,” she says, noting Germany’s Angela Merkel and Liberia’s Ellen Johnson Sirleaf.

“I think Africa in general will heal the wounds of poverty when mothers become the caretakers of our governments,” she says. 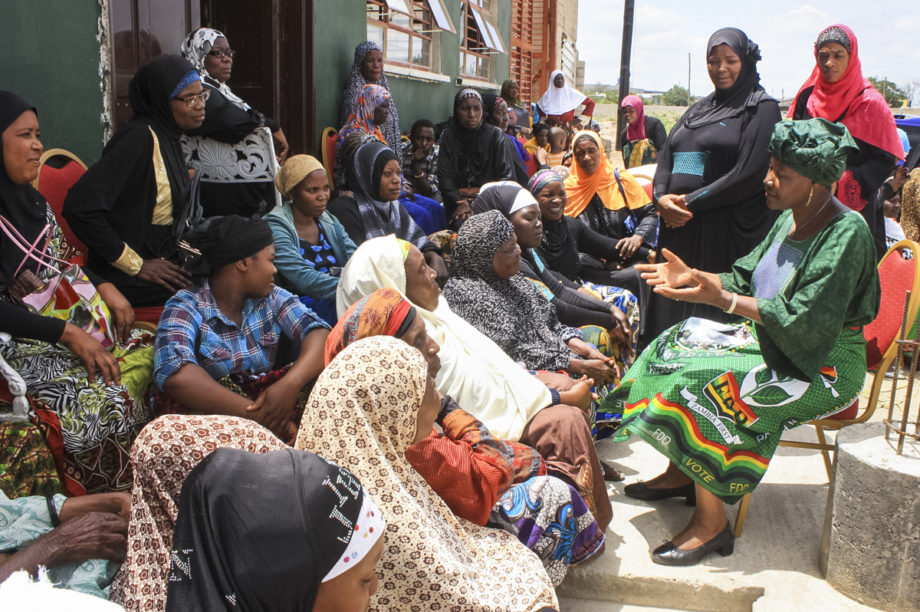 Nawakwi speaks to Muslim women in Lusaka, Zambia’s capital, about women in leadership.

Patriarchal beliefs and the commercialization of politics have marginalized women from political leadership, says Juliet Kaira Chibuta, the executive director for the Zambia National Women’s Lobby, an organization that advocates representation and participation of women in decision-making.

“To be in politics, one needs money, and most of our women do not have the financial muscle,” Chibuta says. “Even the political parties, when adopting candidates, they look at who can contribute financially to the party. That disadvantages most women.”

Violence in politics also scares women away, she says.

“Sometimes politics turns violent, people become physical and sometimes start insulting each other, and most women cannot handle that, so they stay away,” Chibuta says.

Nawakwi says she’s been fighting for the inclusion of women in governance, but nothing has changed.

“We need to move from the rhetoric of thinking that women are looking for charity,” she says. “We are looking to show the world that we can deliver.”

The ground has shaken, and Zambians are ready to have a woman who they believe will deliver. Edith Nawakwi, leader of the Forum for Democracy and Development party and 2016 presidential candidate

Gloria Banda, a supporter of Nawakwi’s party, says parents have the responsibility to eliminate stereotypes in politics by the way they raise their children.

“The problem is society believes that women can’t be leaders, but that can change starting with us the parents,” Banda says. “We need to bring up children in a manner that makes them understand that they are equal.”

Nkandu Luo, minister of gender and child development, says that by ratifying the National Gender Policy, the government has shown its commitment in encouraging women to participate in decision making. The policy says the “government is making concerted efforts to promote employment of women at higher levels.”

Nawakwi says her third-place win in last year’s elections shows that Zambia is ready for a female president.

“The ground has shaken, and Zambians are ready to have a woman who they believe will deliver,” she says.