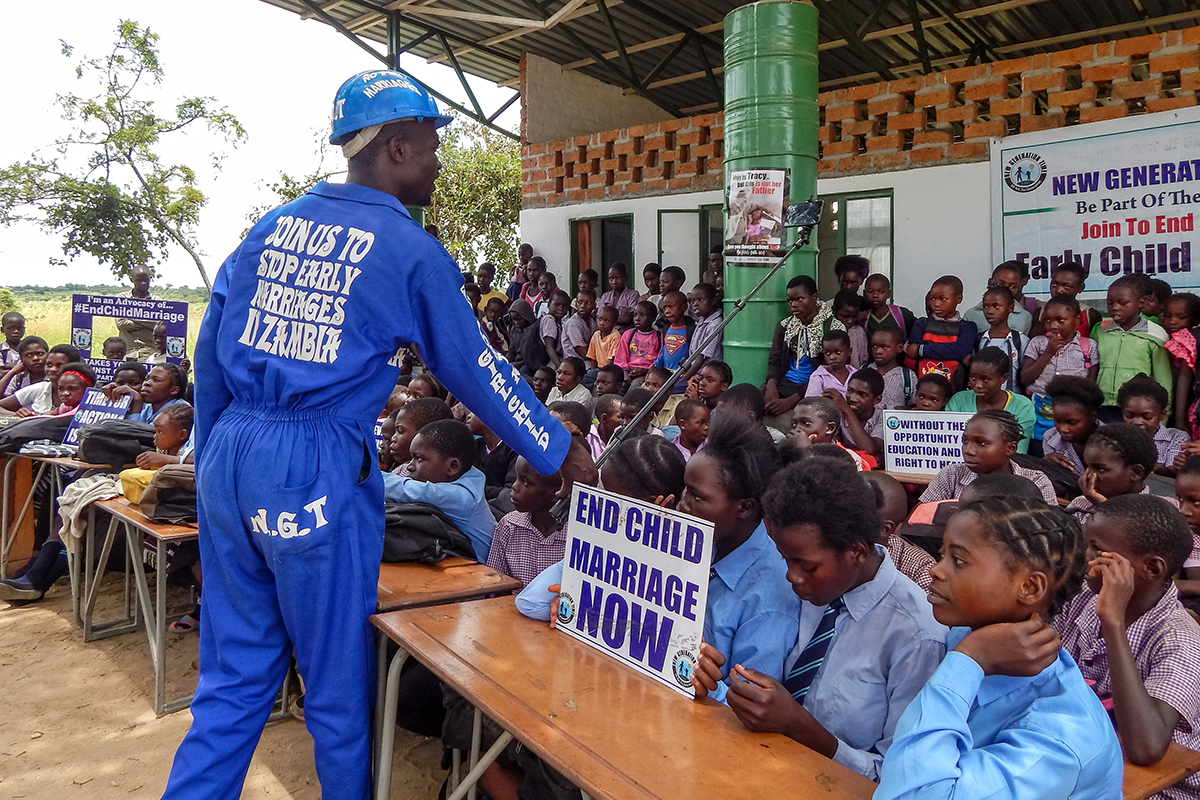 LUSAKA, ZAMBIA — When Elizabeth Chisela was 16 years old, she met a man who promised her a life that would be like paradise, if only she married him.

At first, Chisela says her parents opposed the marriage. But when she became pregnant, her mother consented.

That marriage sparked eight years of what Chisela describes as hell. Her husband, nine years older than her, was abusive, she says.

By the time she left him five years ago, Chisela had two children. Now, she works to end the common practice of underage marriage in Zambia.

About 17% of women and girls between the ages of 15 and 19 in Zambia are married, according to data collected by the Zambia Demographic and Health Survey from 2013-2014. One percent of men and boys in that same age group are married.

That data was echoed in 2017 in a report published by UNFPA, the U.N.’s reproductive health division, together with the Zambian government and the Population Council.

The Zambian constitution defines a child as a person below the age of 18.

Globally, one in every five girls is married before they reach the age of 18, according to UNFPA data.

Significant progress has been made in curbing child marriage around the world, but government officials and child advocates in Zambia say there’s still work to do.

The government has a multi-sector strategy to reduce child marriage, says Pumulo Mundale, the director of gender rights protection in Zambia’s Ministry of Gender, but the problem is complex.

“There are so many components that lead to child marriage, so we are working with different stakeholders in fighting this,” she says.

Zambia’s national strategy includes a goal to reduce child marriages by 40% by 2021. That strategy, which emphasizes partnerships between the government and civil society organizations as well as bolstering the country’s legal framework around child marriage, began in 2016.

Under Zambian law, it’s illegal to “marry or marry off a learner who is a child.” It’s also illegal to sexually abuse a child. Both crimes have a maximum sentence of life in prison.

Collins Hikalinda, national coordinator of the Zambia Police Victim Support Unit, says the country’s education laws protect children who are in school from getting married, but adds that the rule isn’t sufficient. Zambia also has laws that prohibit defilement, but even that is lacking, Hikalinda says.

“We feel the defilement [law] alone is not enough to fight this problem because it only deals with the person that has committed the act,” Hikalinda says. “How about those who consent to the marriage?”

There must be a law that makes it illegal to marry any child, including those who are not in school, says Moses Silungwe, whose organization New Generation Time works to end child marriage.

“What we want is a law that will see that a child, whether in school or not, is protected,” he says.

New Generation Time has collected signatures to petition the government to create such a law, he says.

Chisela, who is affiliated with New Generation Time, says Zambia’s existing re-entry program was key in helping her leave her abusive older husband. That program also helps girls return to school after pregnancy.

Mundale says the Ministry of Gender is in consultations on whether all child marriage should be a criminal offense.

“There are times when it is children marrying each other, so who [should we] criminalize in such a case? A fellow child?” Mundale asks.