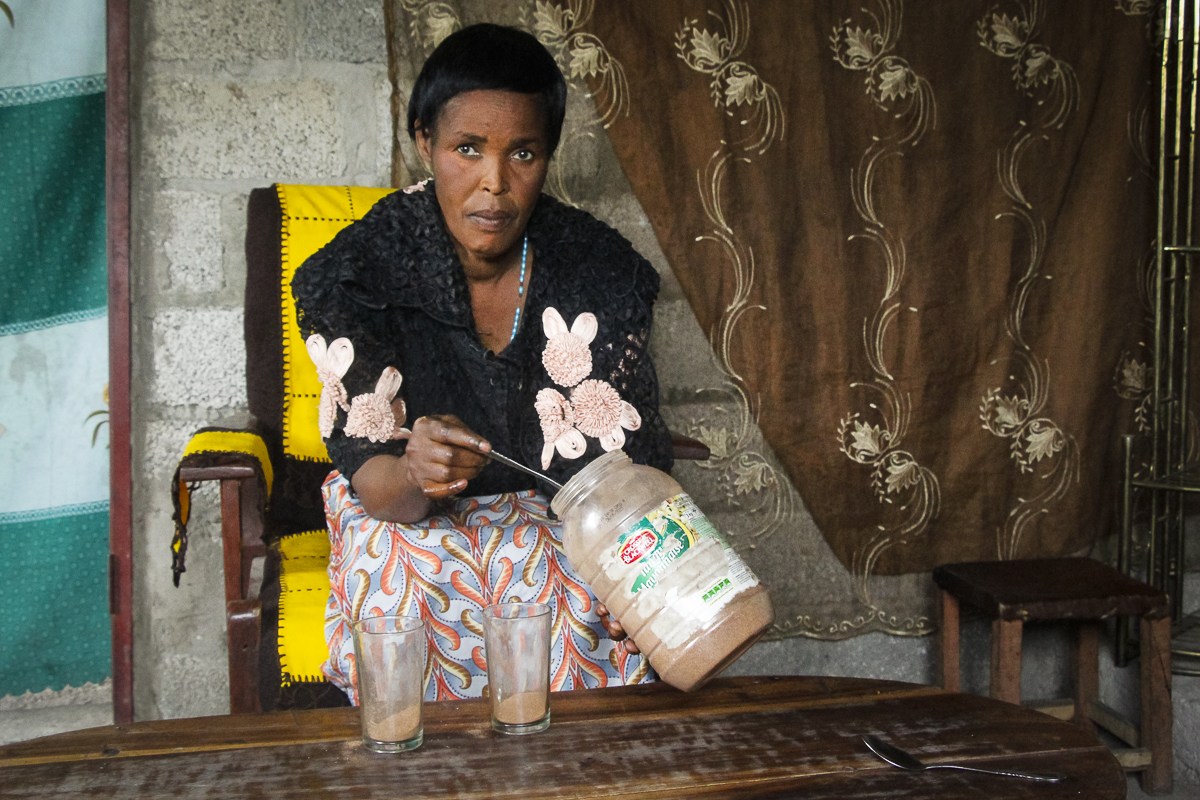 LUSAKA, ZAMBIA — “I CURE AIDS,” proclaims a black-and-white poster on a wall in Lusaka City Market.

Some people take out their phones to copy the phone numbers on the poster. Others shake their heads and move on.

Aggie, a 26-year-old HIV-positive woman, was among those who called the number, which led her to an herbalist who promised to cure her.

Aggie, who asked that only her first name be used, says she’s prayed for a cure since she tested positive for HIV in January. She believes the herbalist, Kakula Namutowe, was sent to her from God. She no longer takes her antiretroviral drugs and instead takes herbs.

“This is where God has sent me for healing,” Aggie says, coughing.

Aggie’s not alone in her search for an herbal remedy. The trend has health experts worried that people could thwart their opportunity to live healthy lives. Government officials have threatened to prosecute herbalists who claim to be able to cure HIV.

INSIDE THE STORY: A poster in a market inspires a reporter, who had lost loved ones to AIDS, to write a story on herbalists who falsely claim to have cures. But finding the right people to interview proved formidable. Read the blog.

There are an estimated 1.2 million people living with HIV/AIDS in Zambia, according to 2014 UNAIDS data. More than 671,000 people were on antiretroviral drugs, known as ARVs, as of 2014, according to a Zambian government report.

Claiming to offer an herbal cure for HIV could have serious consequences, says Ministry of Health spokesman Reuben Kamoto Mbewe.

“We are warning traditional healers and herbalists to refrain from advertising their medicines as cure for HIV,” he says.

Anyone who does so could be prosecuted, he says.

For HIV-positive people, abandoning ARVs, which suppress HIV, to seek an herbal cure could lead to death.

Patients who discontinue treatment for any reason usually return in a worse condition, says Catherine Lungu, a counselor and treatment supporter at Kalingalinga Clinic in Lusaka. Some get better upon restarting the medication, but in most cases nonadherence to ARVs leads to drug resistance and eventually death, she says. 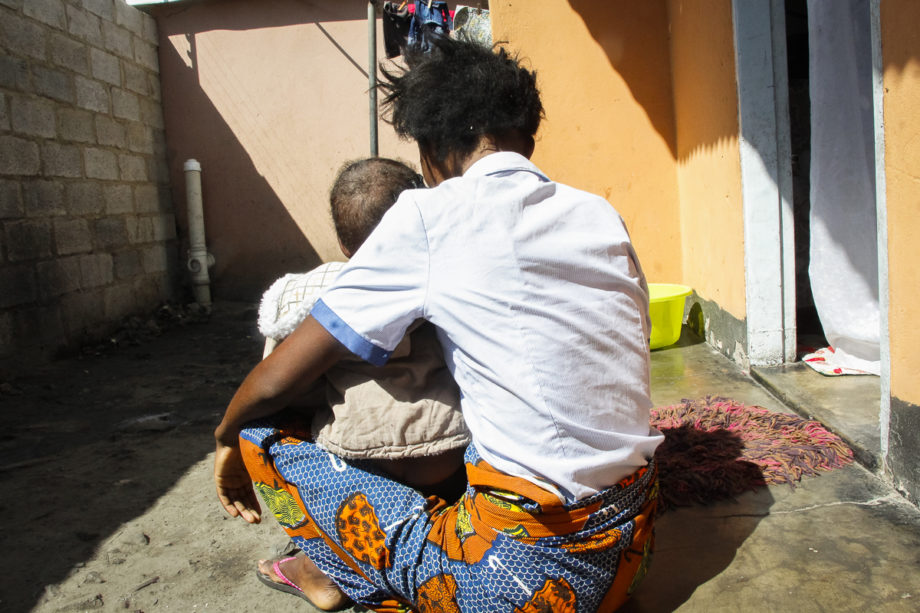 Aggie, an HIV-positive woman who asked that only her first name be used, stopped taking antiretroviral drugs in favor of herbal remedies.

Even so, some HIV-positive people prefer to seek alternative options to avoid potential side effects from ARVs.

“I have heard that the side effects of these drugs are bad, that they sometimes make your legs numb,” Aggie says. “So when I saw the advert for the herbalist, I said, ‘That is where my healing is.’”

But people who have tried herbal remedies say they don’t work.

Mary Banda, a 22-year-old woman who was born with HIV, says her parents gave her herbal medicines when she was a child. They expected her to get better, but instead her health deteriorated, she says.

“When I learned about HIV at school, I went for testing and started taking ARVs,” Banda says. “That is how I became healthy.” 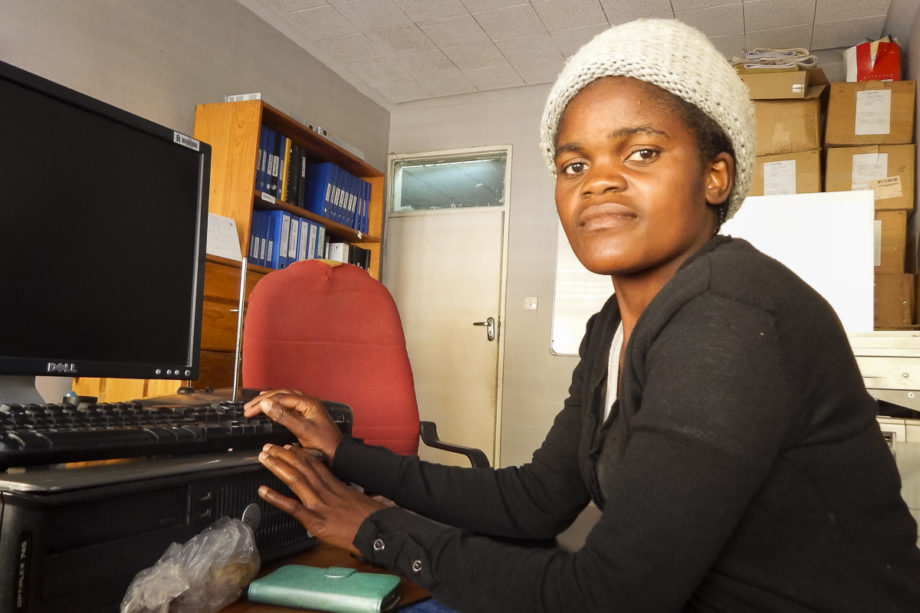 Mary Banda, who was born with HIV, says her parents treated her with herbs when she was a child, but she only became healthy once she started taking antiretroviral drugs.

Danny Lungu, an HIV/AIDS activist who has lived with HIV for the last 26 years, says he too thought herbs could cure him.

“When I was diagnosed with HIV, the first thing that I thought of was to start herbal treatment, because there were so many adverts on how effective herbs were in treating HIV’s opportunistic infections, and even cure the virus,” Lungu says.

But Lungu became so sick that he was bedridden. His health only improved, he says, when he started taken antiretroviral drugs.

“Since then, I have never looked back,” he says. “I take my medication religiously.”

Lungu says his cousin took herbal remedies and did not survive.

“She was on herbal medication, and after seeing that she was not getting better, she decided to go to the hospital, but it was too late,” Lungu says.

Aggie says her experience is different.

“I have faith that I will be cured, because from the time I started taking the medication, I feel better,” she says.

Namutowe, Aggie’s herbalist, claims her herbs have been approved by the government as a cure for AIDS.

“I discovered this medication through prayers,” she says. “I saw how people were dying of HIV, and I kept praying to God to give me an answer. I had a dream where angels showed me some plants, and they told me the plants could cure AIDS.”

She claims to have cured more than 1,000 people of not only HIV, but also “cancer, sugar, stroke BP among others,” according to the flier posted in the market. BP refers to blood pressure. 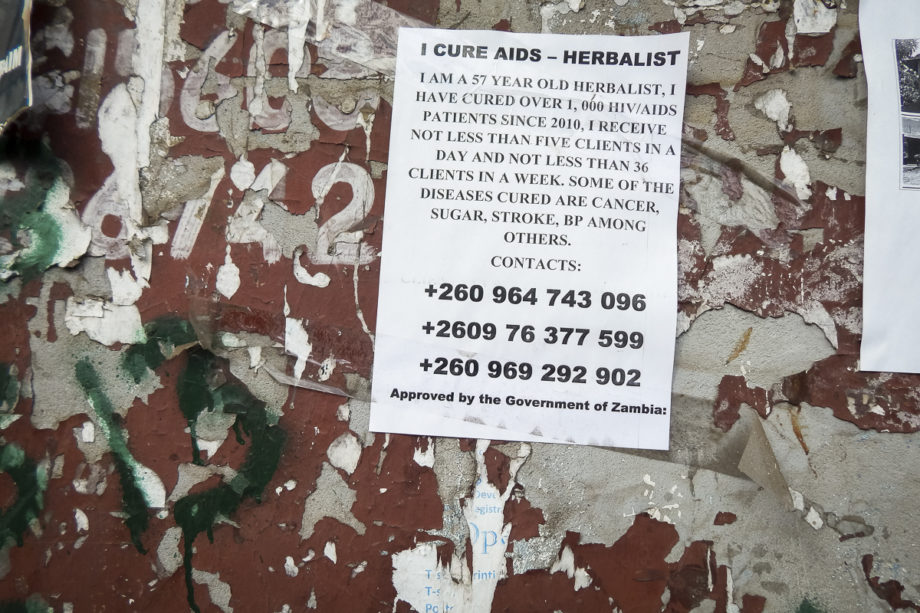 A poster in Lusaka advertises the services of an herbalist who claims to cure AIDS. Government officials say they have not approved any herbal cures for the disease, despite what the poster claims.

But it’s not possible for anyone to check with the people she’s cured, she says, because she misplaced their contact information.

“I had a book where I had all the information about my clients, but it got lost,” she says.

Namutowe claims to be a registered herbalist under the Zambia Institute of Natural Medicine and Research, an organization that could not be located by a reporter.

Her certificate of membership to the association shows it expired in 2011.

Peter Chama, an herbalist, says he was a founding member of the organization. He says he uses that organization’s acronym in the name of his current organization Zinare‑Centre for Complimentary Medicine Studies, where he is the director, so people know where he was coming from.

Chama claims that he too has a cure for HIV. Treatment lasts one year, and none of his clients have completed it, he says. They come to him when they’re very sick, but they stop taking the herbs when they regain their strength.

“Most of them stop the treatment once they feel better because the medication is very effective,” Chama says.

Mbewe, the Ministry of Health spokesperson, says the government has not approved any herbal cures for HIV/AIDS.

Chama says he markets his drug as an herbal supplement, since the government has not approved it as a cure for HIV, but he insists that he’s done thorough research and knows that it cures AIDS. 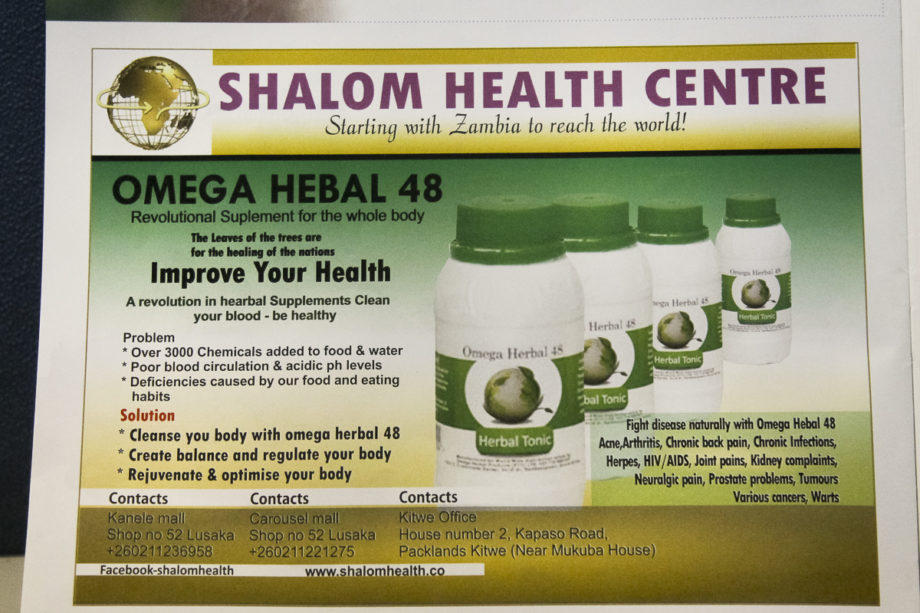 An advertisement in a magazine touts herbs as a cure for HIV and other illnesses.

Felix Mwanza, the director of the Treatment Advocacy and Literacy Campaign, which advocates affordable treatment and care for people with HIV, says the organization encourages use of antiretroviral drugs in the management of HIV because so far they have proved to be effective.

He challenges herbalists to parade people who have been cured by their herbs and show proof for it.

“Those that are on antiretroviral drugs are known,” Mwanza says. “How come we have never known those that have been cured by the herbalists?”

Catherine Lungu and Danny Lungu are not related.