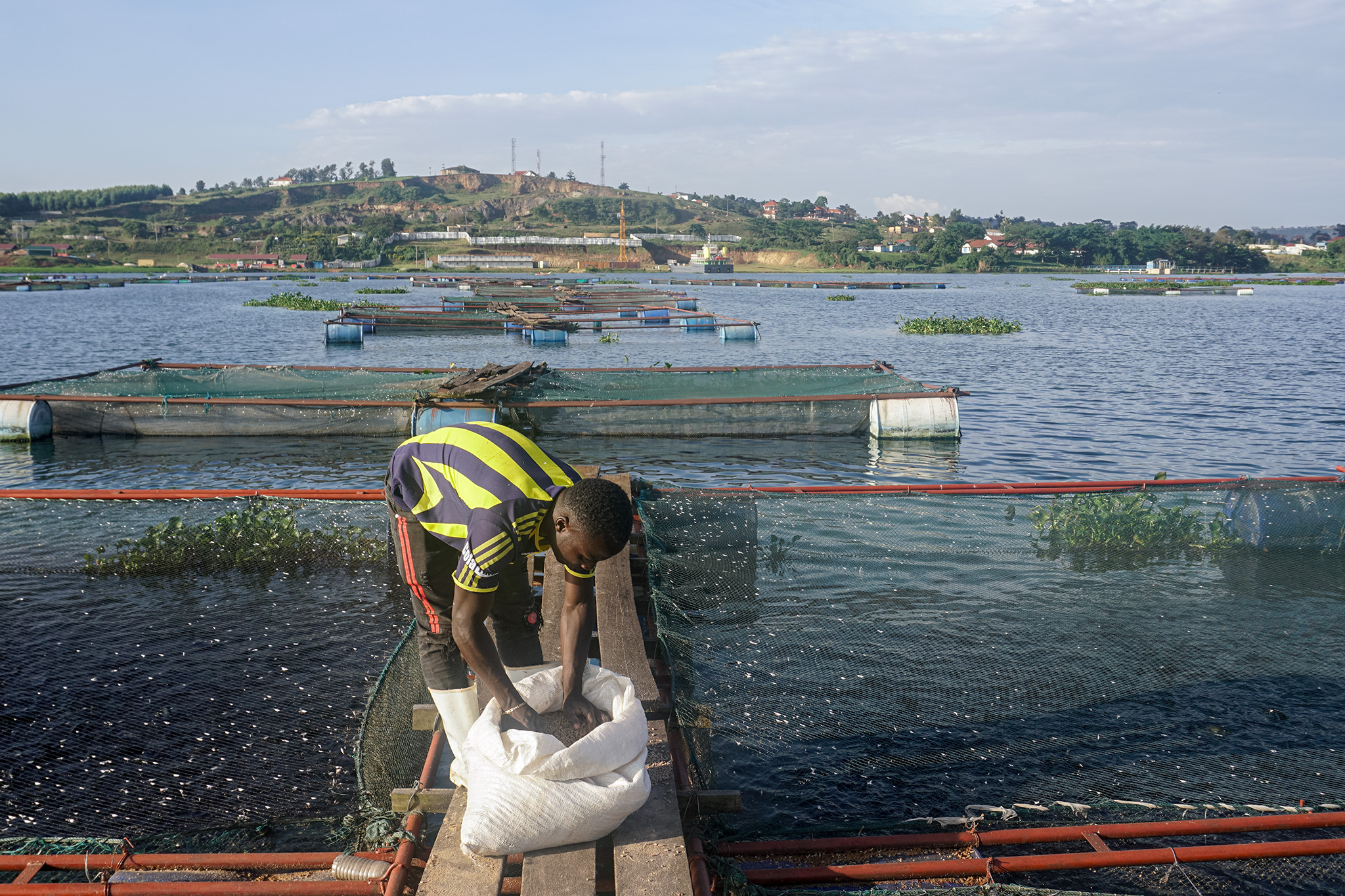 JINJA, UGANDA — As Rogers Nyombi paddles his canoe 20 meters (22 yards) out from the shore of Lake Victoria, he thinks about the career gamble that brought him here.

After high school, Nyombi worked on his sister’s fish farm for five years before he decided to try the business himself 16 months ago. “The startup capital was really high. I used up all my savings at that time, about 800,000 Ugandan shillings ($217),” Nyombi says.

The venture was no run-of-the-mill fishery. Like his sister, Nyombi invested in cage fish farming, the practice of positioning cages in bodies of water to enable fish to be fed in a controlled area and later captured easily.

In the past, poor fishing methods have led to setbacks in Uganda’s fishing industry. Those methods include small-gauge nets, which harvest tiny fish before they have a chance to breed. As a result, catches of fish species like the Nile perch and tilapia declined between 2011 and 2015, according to Uganda’s National Fisheries Resources Research Institute’s 2015 fisheries catch assessment survey.

Cage fish farming has been practiced in Uganda for fewer than 10 years, says Joseph Bwanika, assistant commissioner of aquaculture at Uganda’s Ministry of Agriculture, Animal Industry and Fisheries. He adds that the technology helps restore fish species in the lake. A 2017 survey conducted by the Lake Victoria Fisheries Organization Secretariat found a 32% increase in species like the Nile perch.

“Aquaculture is a great way of increasing fish production and reducing the pressure on the lake as a result of bad fishing practices, like the use of illegal nets and catching young fish,” Bwanika says. 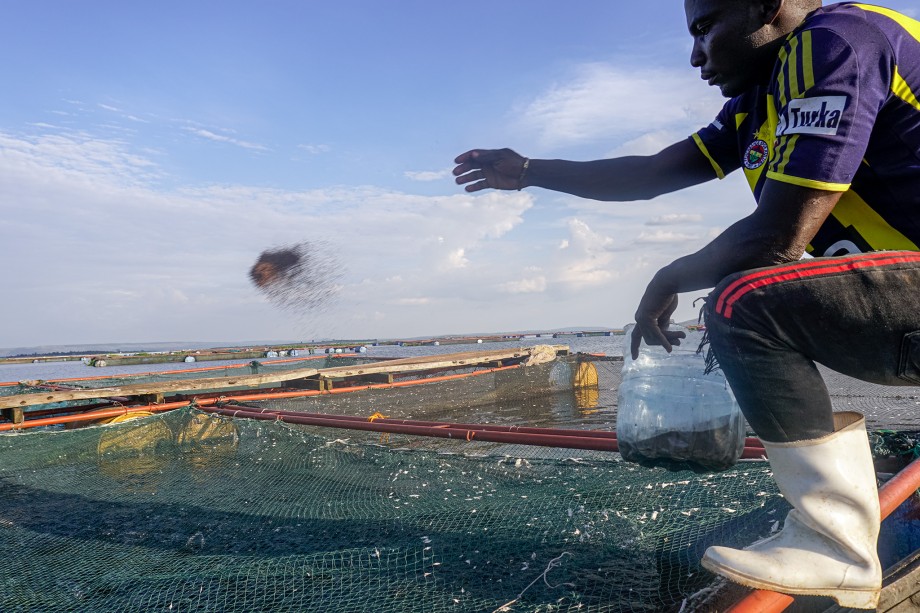 Rogers Nyombi says the food he uses for his cage fish farm on Lake Victoria is made from all-natural products, so it doesn’t pollute the water or otherwise harm the environment.

Cage fish farming is the most viable, innovative solution to declining fish stock in Uganda, says Tony Achidria, senior public relations officer for the National Environment Management Authority. “There is a need to advocate for sustainable development for agriculture to thrive,” he says. “But it is also important for implementers of such projects to be accountable and make sure measures are put in place to protect the environment.”

That’s because the economic benefits of cage culture may not be worth the cost to the environment, says Frank Muramuzi, executive director of the National Association of Professional Environmentalists.

Some of the feeds used in cage fish farms contain chemicals that disrupt the natural growth and development in the lake, Muramuzi says. “This means you are interfering with the biodiversity within the lake. As regulators, we are not in control to know what kind of fish is being introduced into the lake,” he says.

Some have complained that cage fish farms contaminate water meant for human consumption, because the water often smells bad as it flows through nearby water tunnels. Experts say as the cage culture business grows, the needs of other individuals and businesses who rely on local bodies of water must be considered.

“Fish food pollutes the water because it is near the suction plants. This is why cages were designated an area of at least 20 meters (22 yards) offshore, but some are outside these areas,” says Kim Agnes Atwooki, public relations officer for the National Water and Sewerage Corporation. “This leads to contamination of water and means we have to spend higher costs on treating the water meant for human consumption.”

Also, some cage fish farmers don’t play by the rules and travel beyond the boundaries set for the activity, Atwooki says. “Enforcement officers need to play their part in removing illegal cages from these zones,” she says. “But it is taking longer than necessary.”

Assistant aquaculture commissioner Bwanika says the impact of cage fishing must be put in perspective.

“Factors like industrial urbanization and pollution by individuals are also major contributing factors to water pollution in this area. However, we are working on creating lasting solutions to the problem,” Bwanika says. 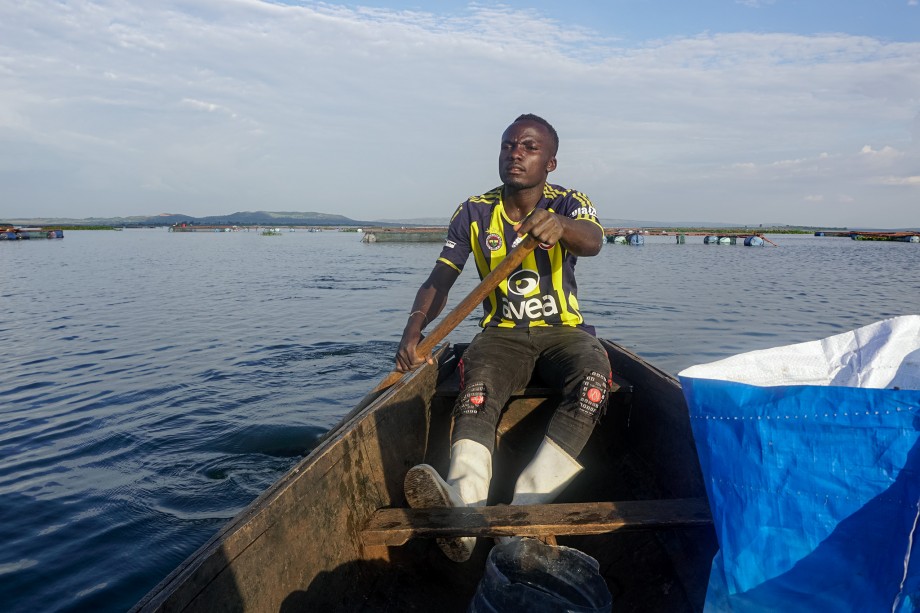 Rogers Nyombi rows the 20 meters (22 yards) from the shore of Lake Victoria to his cage fish farm. In this controlled environment, fish are captured and bred in cages until they are ready for harvesting.

None of these concerns seem to have dampened the enthusiasm for cage farming,

Fisherman Wilson Kamya wishes he had the resources to start a cage farm.

“My colleagues who have crossed over to cage farming boast of the benefits. They say it requires patience but is more profitable,” Kamya says.

Nyombi is excited about the future and encourages unemployed youth to try cage fish farming. He takes pride in his fish feeds and says they are the most expensive part of his business.

“My feeds are made from natural resources, so they have no effect on the lake. I always use the best and know it’s my responsibility to keep these waters clean,” Nyombi says. “That is my whole life in those cages.”