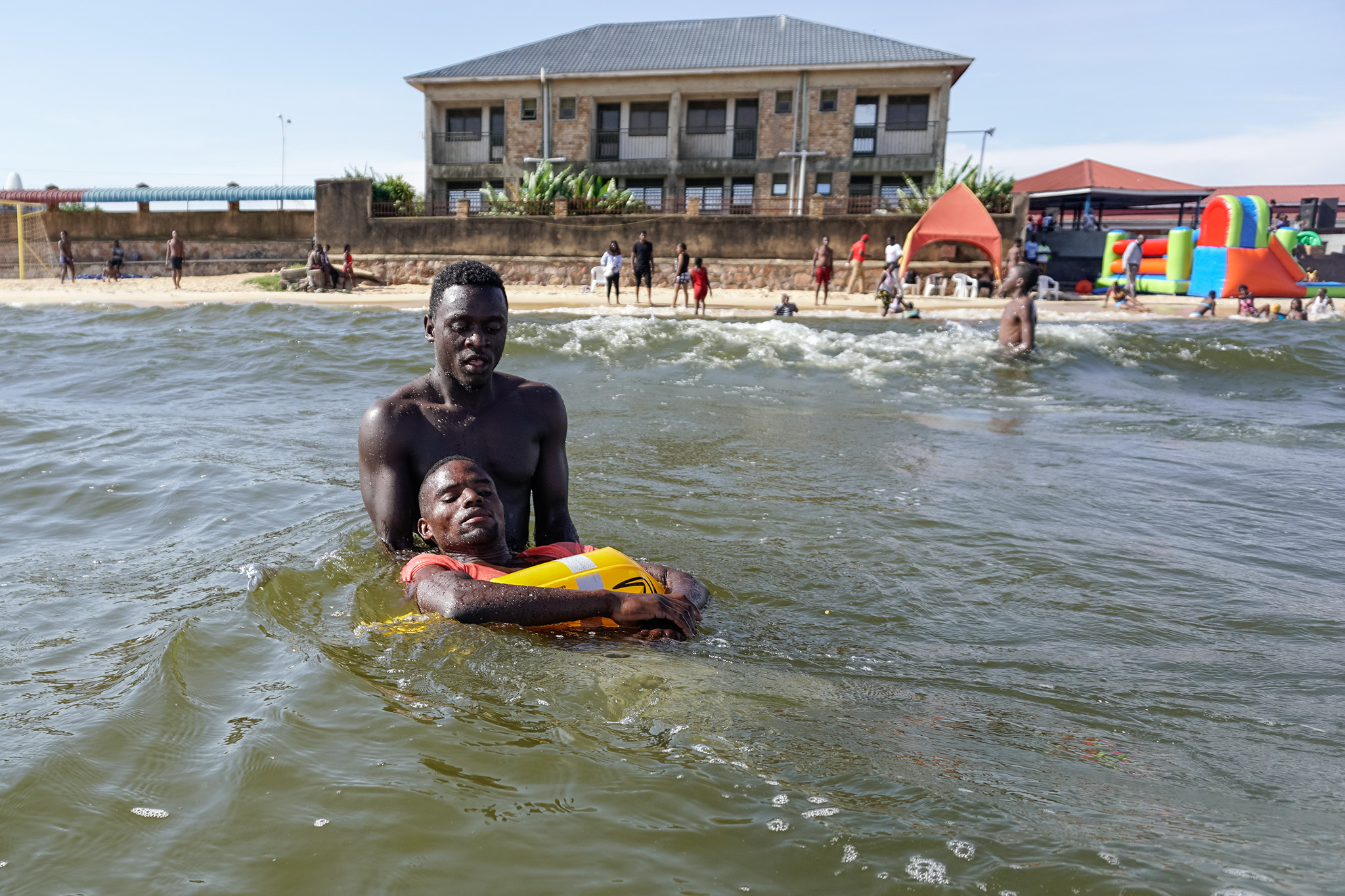 ENTEBBE, UGANDA — David Okiror stretches out his hands to dive, then glides into Lake Victoria during his third swim lesson with Richard Kabuga, a trained and certified lifeguard.

Okiror began swim lessons after a near drowning experience in September 2019. He was riding in a speedboat on the lake with friends when it suddenly flipped over and capsized. Luckily for Okiror, he was with someone who could swim and helped bring him to shore, unconscious.

“It happened so fast. I just remember sitting at the beach after, surrounded by strangers,” Okiror says.

“Probably if that incident had not happened, I would not be taking swimming classes today. It is still scary to think about,” Okiror says.

Like many Ugandans, Okiror did not learn to swim when he was young. Swim lessons were out of reach due to the cost. “Swimming when I was growing up was a luxury. It still is for most Ugandans,” he says.

“One of our goals is not only to ensure individuals can save themselves from drowning, but how do they help others in case of an accident?” says Kabuga, Okiror’s swim instructor. 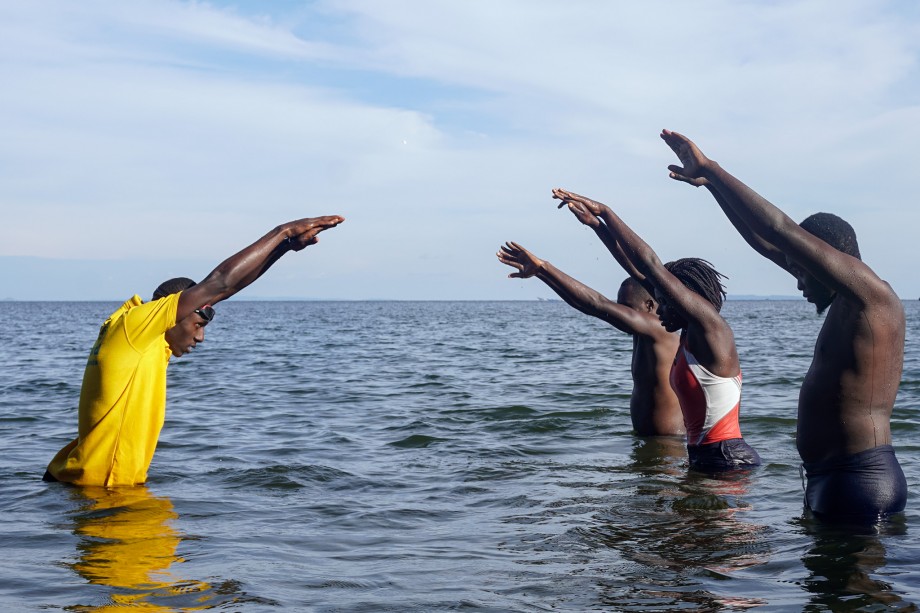 Lifeguard Richard Kabuga (in yellow shirt) teaches students David Okiror (middle), Gladys Agaba and Tony Katungi how to swim. Swimming classes are expensive for many Ugandans, yet more are enrolling for lessons.

These skills may come in handy as more and more Ugandans take to the water for recreation, which has become popular in particular among trendy and affluent Ugandans, thanks in part to its novelty – and expense. But while fun on the water has become more popular, regulations and water safety have struggled to keep pace.

Leah Tayebwa, administrator at EarthWise Ferries, says private operators have contributed to the expansion of the water recreation industry. Tours and party boats go to islands in Lake Victoria like Buvuma and Ssese, where resorts cater to Uganda’s upper and middle classes.

“[We] have greatly contributed to the entertainment and tourism industry, as cruises are now considered as party options,” Tayebwa says.

Because of the celebrity of the people involved in the MC Templar accident, it became the most notorious of Uganda’s boating accidents, but it’s far from the only one.

Critics have said the water industry relies on outdated legislation, such as the Vessel Registration Act of 1904 and the Inland Water Transport Control Act of 1964. The only recent update to Uganda’s water laws was in 2007, but those regulations only pertained to Lake Victoria. Water safety experts believe there is an urgent need to update legislation for all of Uganda’s waters, to make it easier to prosecute boat owners that violate safety regulations.

The government acknowledges that the consequences, which include fines as low as 600 Ugandan shillings (16 cents) and no criminal penalties, are not tough enough on violators, says Barnabas Twinomujuni, senior marine licensing officer at the Ministry of Works and Transport.

Twinomujuni acknowledges that the government can improve water rescue services, but he says action has already been taken in the wake of the MV Templar accident.

Uganda currently has 120 licensed leisure boats, out of 300 total watercraft registered so far, Twinomujuni says. He adds that after the MV Templar accident, Ugandan authorities began inspections. “Boats currently operating have met all safety requirements, so the public should no longer be concerned about faulty boats on the lake,” Twinomujuni says.

“Vessels that have met standards must include trained and qualified crew, be in good mechanical and structural condition,” Twinomujuni says. He specifies that vessels must also have new safety equipment, such as life jackets and buoys that meet quality standards. 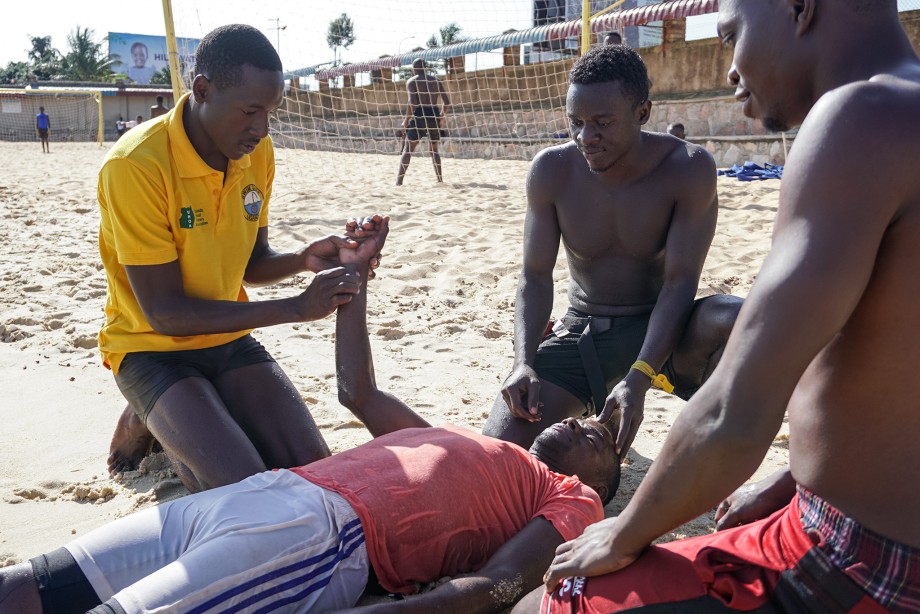 Twinomujuni says that while many boats have passed safety checks, a number have not been examined, as their owners did not participate in the government’s process. These owners have taken their watercraft off the lake to avoid having them impounded by authorities.

He says licensing has been costly for the government, and they are still far from completing the process.

Tayebwa, the private ferry administrator, defends the water industry’s safety record and says precautions are taken to protect the public.

“As boat owners, we do routine maintenance of our vessels, avoid overloading passengers, provide life jackets on cruises and have qualified staff on board,” Tayebwa says.

Dr. Olivia Kobusingye, senior research fellow at Makerere University, says it’s difficult to know how many people die in Uganda’s waters. Despite the attention paid to disasters like the MV Templar, most drownings take place in river or lake communities, including around Lake Victoria, which are some of the country’s poorest.

“Most people who drown are poor and already marginalized fisherfolk, rural people. Their deaths do not make it to the big news,” Kobusingye says.

For the water transport sector to change, she says, it will take strong political will, including better data, public awareness and lobbying policymakers.

Updates to Uganda’s water safety laws have been considered. Twinomujubi says Uganda’s water transport legislation is a work in progress, with a new law, the Inland Water Transport Bill of 2018, under consideration. The bill would increase penalties and make it easier to prosecute people who violate water safety rules.

Moses Kalanzi, founder of Swim Safe Uganda, says that for a country with so many rivers, lakes and swamps, water safety is lacking. He says, “If a country that has a third of its geography covered by water doesn’t enforce safety regulations, that shows you its priorities.”

He says the government and communities should include water safety in school curriculum, including the use of life jackets and first aid.

“[The [majority] of the players are not playing their part,” Kalanzi says.

Lack of funding is still a big problem when it comes to enforcement of water safety rules, Twinomujuni says. However, some funding may become available as the African Development Bank has sponsored search and rescue centers on the lakes and offered $14 million in aid to the areas around Victoria, Albert and Kyoga lakes.

“This means that boats are going to be tagged. There will be a designated number to call rescues. We will have boats on standby and qualified personnel to operate these vessels,” he says.

For Kalanzi, this is a positive step, but more needs to be done to prevent water-related accidents.

“Most Ugandans cannot swim. We need a generational change when it comes to swimming and safety, qualified staff working on the boats and, most of all, laws that are practical and enforced,” he says.