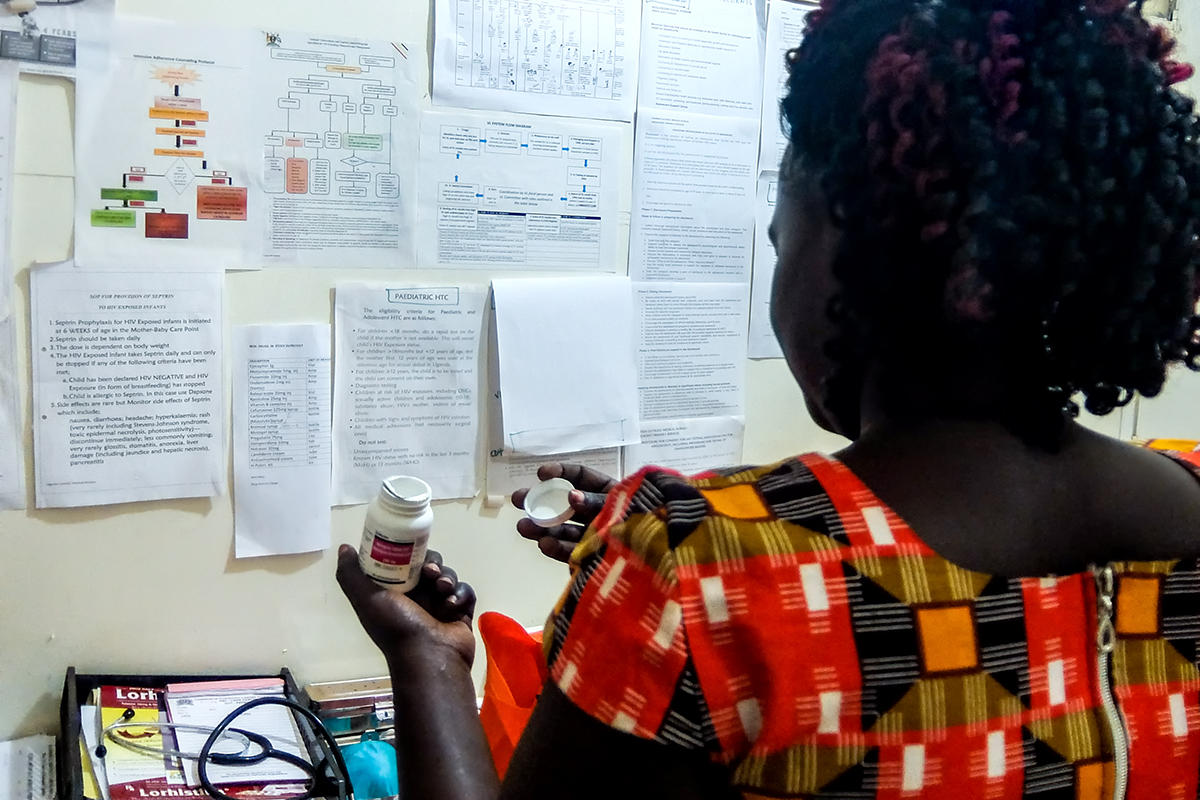 They are waiting for their turns to see the clinician to pick up their monthly antiretroviral (ARV) drug refills at the Kamwokya Christian Caring Community, an HIV/AIDS service organization in Kamwokya, a suburb of the capital, Kampala.

Monica Nalutaaya, 35, says she comes to pick up her ARVs faithfully each month.

When she learned she was HIV-positive in August 2017, she says she was advised to start taking ARV treatment immediately.

“Since I started taking drugs, I have not fallen sick. I was counseled properly,” she says.

One year after Uganda launched its test-and-treat policy, health-care providers and patients alike are reporting progress. The policy, which requires that all patients begin taking ARVs upon diagnosis, was designed in line with the Joint United Nations Program on HIV/AIDS (UNAIDS) target of eliminating HIV/AIDS by 2030. But some say the policy is too forceful, as some patients claim they are not being given the right to choose their care options.

The policy is working, says Godfrey Mabiriizi, program manager at the Kamwokya Christian Caring Community. He says the new policy is forcing his group and other groups to make new efforts to reach high-risk populations.

“We have reached out to bar areas, brothels and other bases where people usually congregate,” he says.

Since this policy was implemented, his organization has enrolled 156 new people and placed them on ARV treatments, he says.

But implementing the policy, which requires clinics and health-service providers to give ARV medication to patients upon diagnosing them with HIV, has its challenges.

“Some people resist, because they are still shocked,” he says. “We have to prepare them adequately with counseling before they enroll for treatment.”

The new policy, which is in effect throughout the country, requires regular follow-up and monthly visits to pick up the medication. So far, follow-up rates are good, he says.

“A few are lost to follow-up, as they have to start reporting to the facility for treatment, as opposed to the past,” he says. Prior to the policy, patients and clinics were not obligated to follow up once someone was diagnosed as HIV-positive.

“When they start ARVs when they are healthy, viral-load suppression takes place within six months, as opposed to when they were started on ARVs when their viral load was low,” she says.

But deciding to take ARVs should be a personal choice and not a government-mandated one, says Florence Nampiima.

She tested HIV-positive in 2009 but did not take ARVs until 2015. Back in 2009, she says, patients were only counseled to take the medication if they were pregnant or if the CD4 cell count, a measure of how well the immune system is functioning, was below 500.

“These drugs are for life,” she says. “Starting them immediately after testing somehow [breaks] counseling rules where someone needs adequate time and preparation to decide to register for treatment.”

Her concerns are not uncommon, says Joseph Wasswa, a health-policy analyst.

He hears frequently from patients who object to not having the right to choose when and where to get care with the new policy.

“It may limit [the] client’s choice of care,” he says. “Issues of stigma may arise, since testing is also done in communities where they live.”

Nahataba, of ROM, says they are employing strategies to reduce stigma.

“We have started men-only clinics in the evening once a week to encourage men to test and seek treatment at a convenient time after work,” she says.