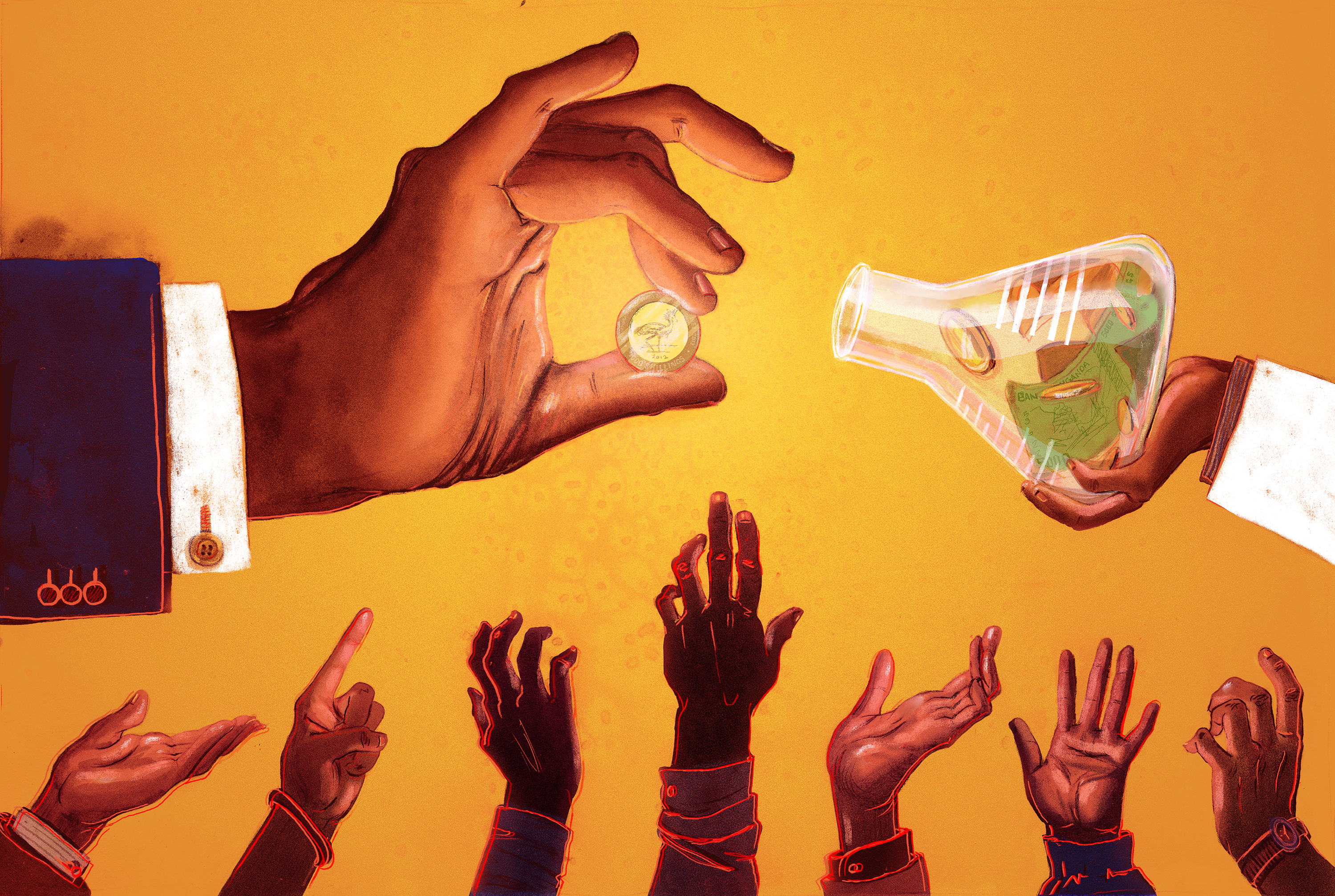 KAMPALA, UGANDA — Using a blue pen, Danson Kahyana, a professor, is busy striking through a literary article that he is editing.

In his office at the College of Humanities and Social Sciences at Makerere University, Kahyana says he believes artists are key to the the country’s future.

Then, he launches into a topic that he has plenty of opinions on — a new government proposal that plans to give raises to government-employed scientists this summer.

He calls the increase irrational.

Artists, too, are contributing to the country’s development, albeit in different ways, he says.

“It’s not fair or reasonable, from whatever angle. You can’t punish me for choosing to do what I wanted,” the literature professor and literary critic says of his choice to pursue the arts. “It is like saying those who grow cotton are better than those who grow coffee.”

“Chinua Achebe has marketed his country, Nigeria, more than its scientists. Okot P’Bitek helped [Ugandans] to understand that the colonial education destroys the African psyche,” he says.

The Ugandan government plans to increase pay for many of its civil servants this year, but pay for scientists has been prioritized. The pay hikes, designed to offer competitive wages to the country’s best minds in science, are scheduled to come through in July. But some Ugandans are questioning the logic that gives scientists priority, while others applaud the move to encourage scientific innovation here.

In recent months, public servants including teachers, university lecturers and the staff of the judiciary have gone on strike, protesting the low wages paid to civil servants. In November 2017, medical doctors went on strike for three weeks because of poor pay and unfavorable working conditions.

The suggestion to boost the pay of scientists was first proposed in the 2010-11 budget but has not yet been put into practice because of budgetary limitations. Late last year, the cabinet passed a resolution allowing the Ministry for Public Service to increase pay for scientists in July 2018.

As an example, entry-level engineers working for the government earn 800,000 Ugandan shillings ($225) per month, and the proposed raise would boost their pay to 1 million shillings ($275). The ministry says it is still working out funding sources for the proposed increases.

Victor Bua Leku, assistant commissioner for compensation at the ministry, says scientists were prioritized this year in hopes of giving scientists an incentive to stay in Uganda.

“The cabinet advised that we pay a competitive salary that can attract and retain critical talents and rare skills, and these include medical professionals, surveyors, engineers, scientists and science teachers in schools, among others,” he says.

While public servants in other professions have been critical, some Ugandans say that locally driven innovations in the sciences indirectly benefit all the country’s inhabitants.

Joan Magayane, an engineering officer with Kampala Capital City Authority, says increasing pay for scientists will encourage experienced and competent scientists to work for the government, adding that currently the best scientists tend to prefer consulting roles, which pay more.

“An increase in pay will enable the government to attract competent staff,” she says.

Magayane says the government likely prioritized scientists because they spend more years in school, and she believes that higher salaries will ultimately boost innovation.

“Some people are not thinking hard because of poor pay and limited ability to innovate,” she says.

But members of other professions do not agree.

Dr. Ekwaro Obuku, the president of the Uganda Medical Association, which led the three-week strike for increased pay, says that medical workers have been underpaid and worked in unfavorable conditions for too long.

“Doctors have been undervalued, according to available resources. Let government fix remuneration in a phased manner, if resources are not available,” Obuku says.

Many Ugandans have expressed support for the proposed increases.

Sheilla Katuura, a graduate in gender studies, says prioritizing science is in the best interest of all Ugandans, because government scientists are working to eradicate disease.

“You can’t make all people happy at the same time,” she says. “There has to be priority. If there is investment in research and innovation, money will trickle down in the process – even artists might benefit from it. The world rotates around science. Investment in this area would benefit the country. Look at how cancer is killing people. Motivate them to be innovative.”

“If the government is interested in innovators, increasing pay for scientists will be a wise move,” he says.