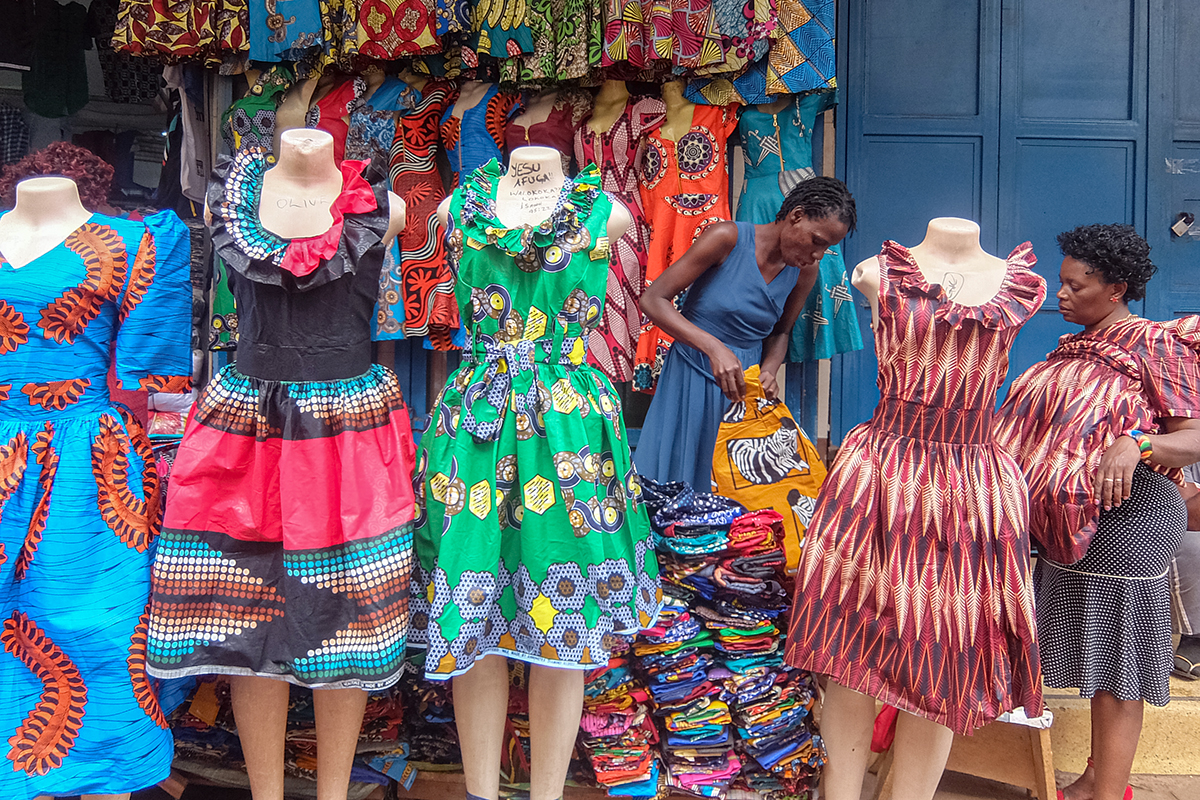 KAMPALA, UGANDA — In a country where used clothing fuels local fashion markets, ready-made clothing that was manufactured domestically can be hard to find.

So Lynn Katushabe was excited when she spotted a locally-made, coffee-colored dress on a mannequin in a shop on this capital city’s busy Ben Kiwanuka Street. She slips the dress off the mannequin. It’s 20,000 Ugandan shillings ($5.30) – the price of two dinners at a decent hotel, she says.

“I must take it home,” Katushabe says, beaming.

Uganda is undergoing a fashion transformation. For decades, the primary options for clothing were used garments imported from Europe or custom-made pieces created by local tailors.

Now, the country has a fresh version of its own garment industry. 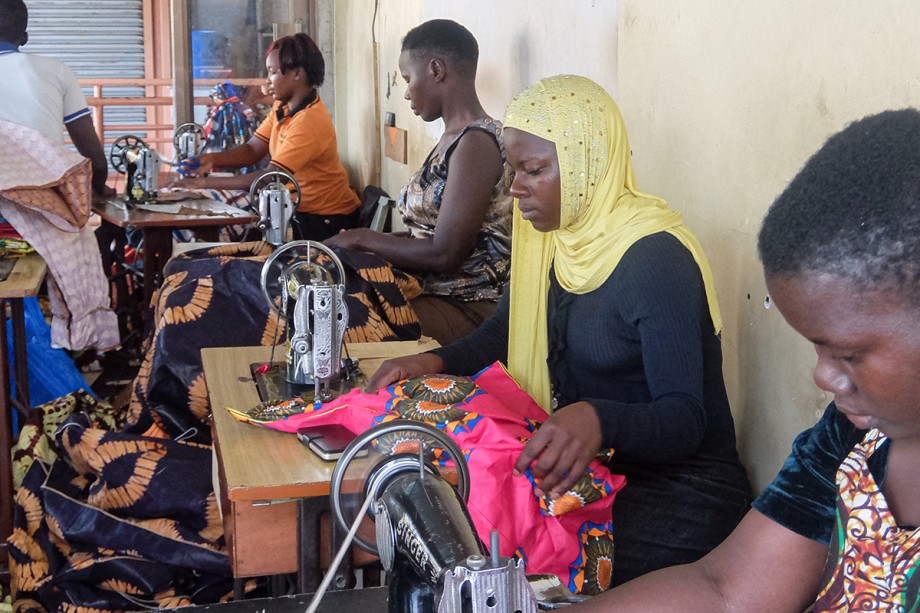 Excitement is growing around Uganda-made products because of a government initiative called Buy Uganda Build Uganda (BUBU), launched in 2014 and implemented in 2017. The initiative promotes a series of policies, including one that requires 20% of the government’s procurement to be of local products and services. Footwear, pharmaceuticals, plastics, tea and leather products were among the original focus sectors. The country’s textile industry, particularly in the form of school uniforms, was identified in other government documents as a key area for investment.

The initiative has since been rebranded as Zimba Uganda, but is still widely known as Buy Uganda Build Uganda.

There are now 15 major clothing manufacturers in Uganda, according to information provided to GPJ by Jerome Nuwabasa, the officer in charge of textiles in the Ministry of Trade, Industry and Cooperatives.

It’s a welcome shift for many Ugandans, who say they felt patronized by the fact that most of the clothes available at reasonable prices were hand-me-downs from foreign countries.

“The regime should be credited for making an effort to raise the status of many Ugandans, even teachers like us, from wearing used clothes from Europe,” saysOkunde Gloria,a secondary school teacher.

The Ugandan government has tried to curtail the secondhand clothing market in the past. Along with other members of the East African Community, it agreed in 2015 to work toward banning the import of secondhand clothing in a bid to promote locally-made garments.

Some of those countries, including Uganda, added tariffs to secondhand clothes – a move that startled used clothes sellers. Hadija Nakakande, a spokesperson for Uganda’s Ministry of Trade, confirmed that Uganda’s tax is currently in effect.

Not everyone is happy about the bans. East African Community member countries are major recipients of secondhand clothing exports from the U.S.-based organization Secondary Materials and Recycled Textiles Association. The organization, also known as SMART, stated that such bans violate the African Growth and Opportunity Act, a U.S. trade act from 2000. That act requires signatory countries to eliminate barriers to U.S. trade, but lobbyists at SMART say bans on secondhand clothing do the opposite.

In 2018, U.S. President Donald Trump announced a suspension of Rwanda’s apparel export eligibility duty-free to the U.S. in response to Rwanda’s secondhand clothing ban. So far, Uganda hasn’t been the target of a similar suspension, and Ugandans are excited about taking back their clothing industry. 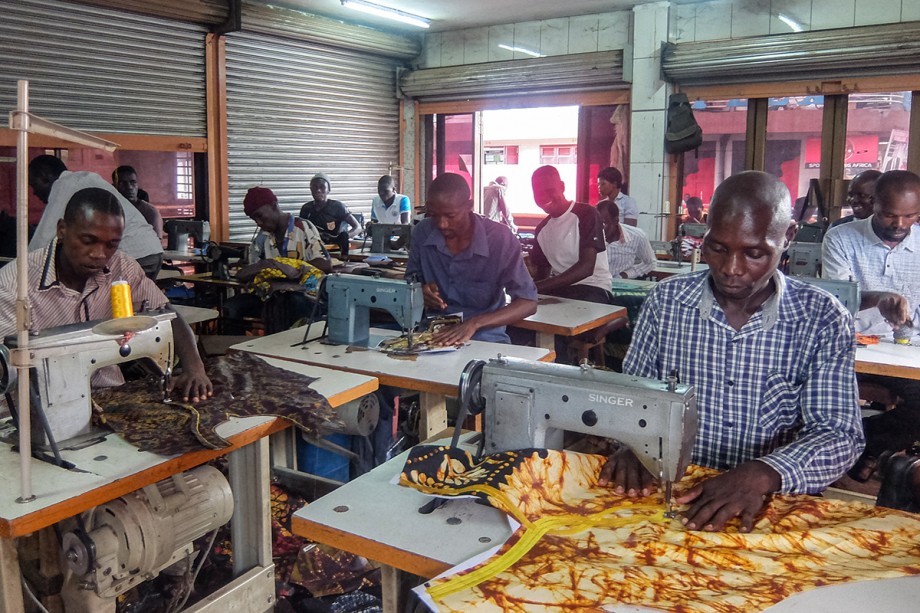 Employees sew in a garment workshop at Mackay Plaza in Kampala, Uganda. A government initiative to promote goods made in Uganda has sparked interest in locally-made clothing.

Paul Baganizi owns a school uniform factory. He says he started his business with one sewing machine, which he used for tailoring. That was in 2003. Now, he says, his company has more than 200 sewing machines and over 120 workers. The company supplies uniforms to schools throughout the country, as well as in Kenya, Sudan and Rwanda. The BUBU initiative helped his company grow as the entire country got excited about Uganda-made goods, Baganizi says.

The rising craze for fashion designed and made by Ugandans has attracted many local people to the industry.Katende Ivan,chairman of a group of tailors in Mackay Plaza, a shopping area known for its garment workshops, andNamatovu Jamira,who coordinates another section on the same floor, are no exception. They take large wholesale orders for clothing of all types from retailers.

The industry directly rewards good work and efficiency – customers will return items that are not well made, Katende says.

“If one is not very fast or thorough, that will determine how much they should get,” he adds.

Christine Nakaye, a dressmaker, says she feels a duty to serve other Ugandans.

“I could not think of making anything else apart from new bitenge garments,” Nakaye says, using the Kiswahili word that refers to fashion designed in Africa.