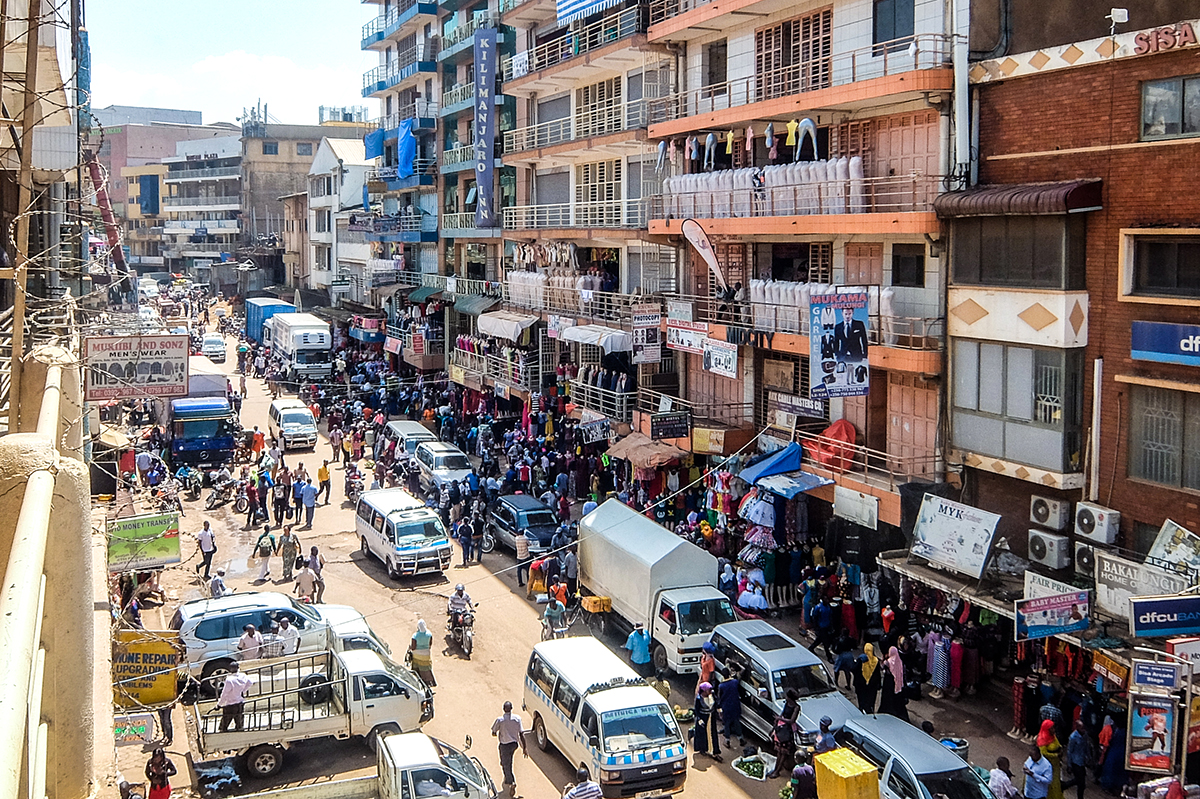 KAMPALA, UGANDA — Brian Kasujja sells toilet seats, bath tubs and tiles – all shapes, sizes and colors – in his shop at the Hardware City building near Nakasero Market, a main shopping district in this capital city.

Kasujja opened his store in 2012. Business was strong until 2014, when Chinese-owned storefronts began to pop up in the area, selling similar items.

That angered Kasujja. Foreigners should be barred from competing directly with Ugandans, he says.

“They sell these products at a lower price than us, yet we buy these products from their local factories and also import from them as retailers,” he says.

Kasujja’s anger reflects growing tension between Ugandan business owners and foreign ones, specifically those from China and, to a lesser extent, India.

It’s common to find vendors and petty traders from other African nations operating in Uganda, but the vitriol is directed toward Asians, exacerbating decades-old tensions rooted in the colonial era, when British officials propped up Indian-owned businesses. That practice ended in the years after Uganda gained its independence, but frustrations have re-emerged. Ugandan businessowners have led protests, including one this year that had many of the city’s businesses closed for a full day.

Even government officials have spoken out against foreign-owned businesses.

“Asians cannot be stopped unless the law is very clear on the matter,” says Khadija Nakakande, a Ministry of Trade, Industry and Cooperation spokeswoman.

Asian traders say they’re deeply reluctant to make any public statement on the issue. Xiang, a bag wholesaler and retailer, asked that only a portion of his name be published due to his concerns about his personal safety.

“Tell me a law in Uganda that stops me from selling one bag to a customer who comes to me wanting that one bag,” he says. “Yes, I deal in both wholesale and retail trade because I pay tax for both trades. And I employ five Ugandans.”

Xiang admits that he first came to Uganda from China as a wholesaler. But when that business didn’t do as well as he expected, he branched into retail, he says, because there’s no law that bars him from selling single items to individual customers. His shop has been open for about six years.

He says he made the $100,000 deposit into the Bank of Uganda required by the government of all business owners who open a retail shop, but he could not produce any evidence of that deposit. 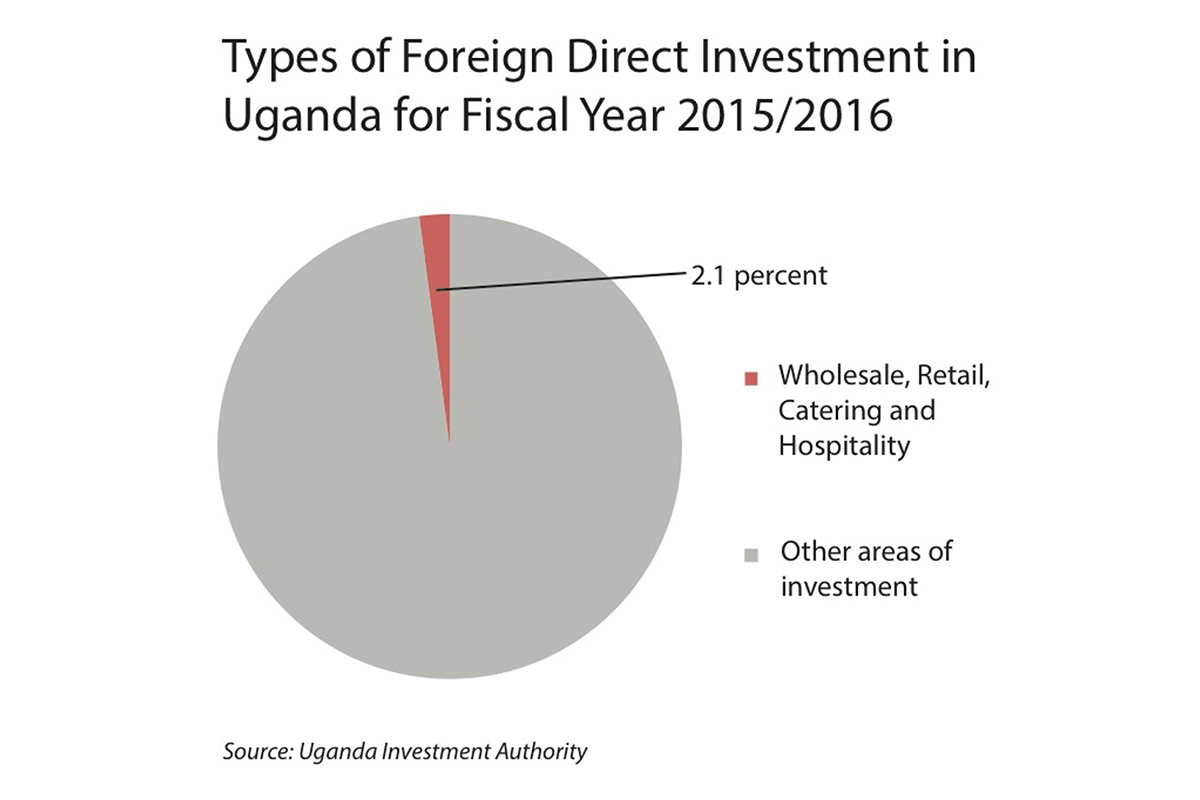 Lawmakers are considering an amendment to Uganda’s investment code that would increase that deposit to $250,000.

The proposed change is intended to “save Ugandan traders from falling victims to unfair competition,” says Nabila Nagayi, a member of the Parliamentary Committee on Trade, Industry and Cooperatives.

Meanwhile, the Kampala Capital City Traders Association is pushing for an all-out ban on foreigners working in petty trade. Issa Ssekito, the association’s spokesman, is among a vocal group of Ugandan trade advocates who say that foreigners, and Asians especially, operate illegally in the country.

Nakakande says her ministry’s formal opinion is that non-Ugandans shouldn’t be allowed to engage in retail businesses at all.

“Our concern is for our traders, and we have received many complaints from our traders that they can’t compete with these foreigners,” she says.

No one, not even the government, seems to know how many foreigners are operating businesses, whether legally or illegally, in Uganda.

Jolly Kaguhangire, the executive director of the Ugandan Investment Board, which oversees all foreign investment and trade, says a complete review is needed.

“I want to know who our investors are at the moment, and how many do we have?” she says.

There is historic precedent for concerns about foreign businesses. British rulers positioned Indians in powerful economic and political roles during the nearly 70-year colonial era which lasted until the 1960s. When Idi Amin took power early in the post-colonial era, he accused Indians of exploiting Ugandans and deported them by the tens of thousands in 1972. Ugandans widely supported those expulsions.

But current President Yoweri Museveni, who took power in 1986, encouraged Indians to return to help boost the economy and create jobs for Ugandans. Some of those returnees even repossessed the very businesses they’d left behind more than a decade earlier. (Read our 2016 story about racial tensions in Uganda here.) 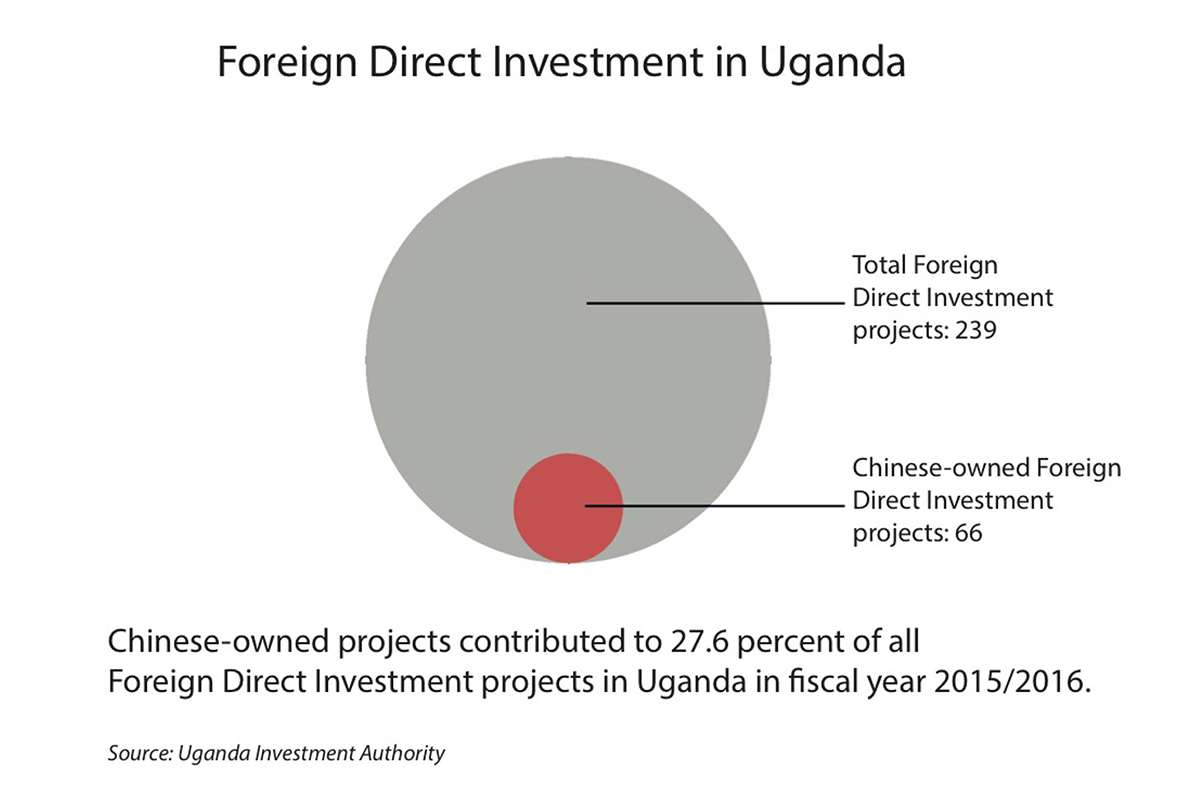 But many of the Asian-owned businesses that have drawn the ire of Ugandans operate on a small scale. Such traders and vendors now have a prominent place in daily life in Uganda, even in villages outside urban areas, and resentments aimed at foreign-owned businesses have largely shifted away from Indians toward the Chinese. Ugandan government officials have in recent years taken to accusing Chinese business owners of entering the country on tourist visas and staying on to open businesses illegally.

The rumors are only partially true, according to a study conducted in 2012 and published in 2016 by African Studies Quarterly. Many of the Chinese traders interviewed came to Uganda on tourist visas, then obtained work permits after arriving in Uganda, despite a law requiring them to apply for work permits in their country of origin.

Chinese business owners are often accused of bringing in their own workers from China, but most of the businesses examined had staffs that are more than 60 percent Ugandan. But the businesses mostly had Chinese workers in managerial roles.

The Chinese traders told the researchers that they want to follow local laws, but that they face “unofficial fees” when they try to do so. A long application process leads to many traders overstaying valid visas, they said.

Our concern is for our traders, and we have received many complaints from our traders that they can’t compete with these foreigners. Khadija Nakakande, a Ministry of Trade, Industry and Cooperation spokeswoman

In November 2016, Minister of Trade, Industry and Cooperatives Amelia Kyambadde pledged that all foreign traders would be required to validate their documents by the end of that year. That has happened before – in 2012, Kyambadde issued a press release announcing a two-week period during which unlicensed foreign traders could register with the government.

“Foreign petty traders have dominated the entire distribution chain of commerce through engaging in manufacturing, wholesaling, [retailing] and hawking,” the release stated. “This is an anti-competitive practice.”

Khadija Nakakande, a spokesperson for the ministry, told GPJ in June that a committee has formed to devise solutions to the problem of unlicensed foreign traders.

“Government has to do something fast to eliminate Chinese from trading in retail, for I fear my business might fail if nothing is done,” he says.