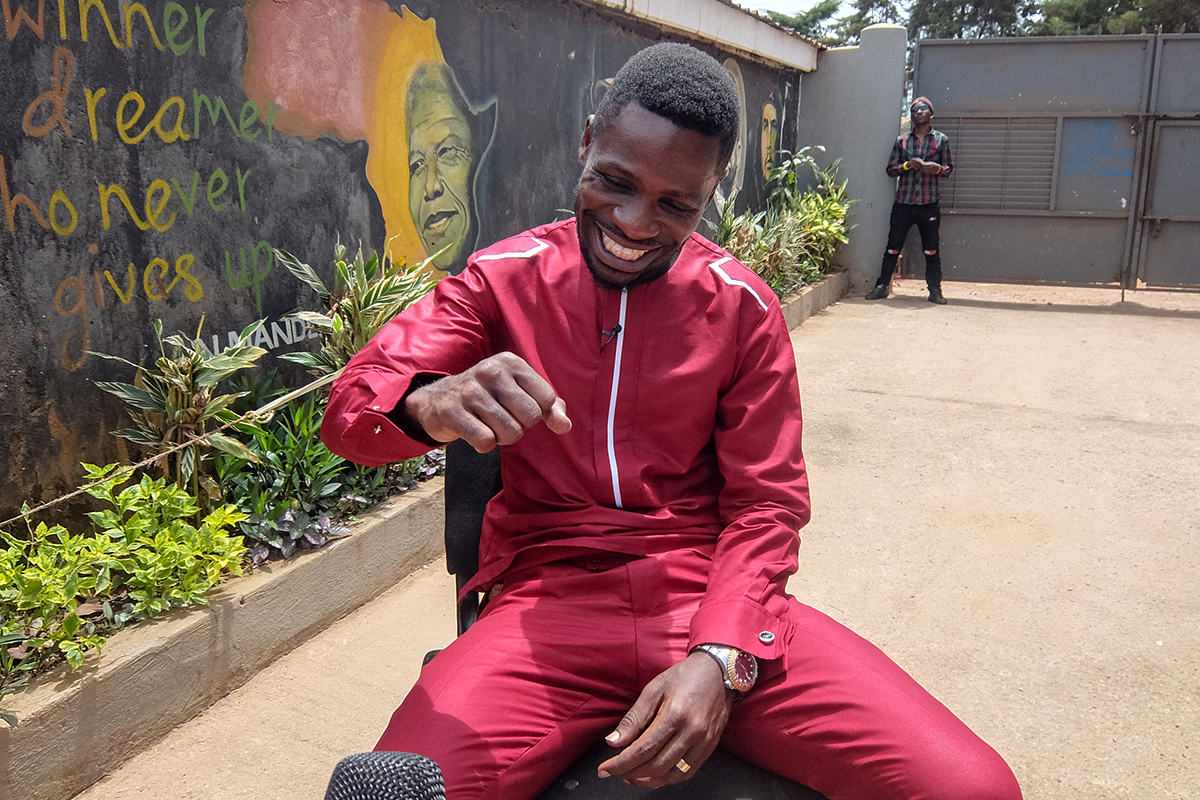 KAMPALA, UGANDA—Patriko Mujuuka is a comedian and radio presenter for the Central Broadcasting Service. He also plans to run for a seat in Parliament representing Nakifuma County in central Uganda.

His job has prepared him to speak publicly about important issues, so now he’s ready to address social injustices in Uganda through policy and not punditry, he says. Freedoms of speech and assembly, as well as police torture, are the most pressing issues here, he says.

Article 29 of Uganda’s Constitution provides for freedoms of assembly and expression, yet many Ugandans have been arrested and tortured for exercising these rights, he says.

“These are issues we are already talking about,” he says. “You just can’t keep quiet when people are being brutalized. Honestly, if we don’t come up to talk about these things, it won’t stop.”

Other artists say they want to follow in the footsteps of pop star Robert Kyagulanyi Ssentamu, who is now the face of the opposition against President Yoweri Museveni, who has been in power since 1986, and his party, the National Resistance Movement.

The president’s age has been the subject of recent controversy, as his supporters removed a long-standing age limit of 75 ahead of the 74-year-old president’s presumptive bid for another term.

Ssentamu, whose stage name is Bobi Wine, is a member of Parliament for Kyadondo County East constituency in the Wakiso district. He says that people in the entertainment industry have what it takes to speak up for other Ugandans, and many stood up for him when he was arrested earlier this year.

You just can’t keep quiet when people are being brutalised. Honestly if we don’t come up to talk about these things it won’t stop.Patriko Mujuuka a comedian, radio personality and parliamentary hopeful for Nakifuma County constituency

The impact of popular figures joining the political fray has other important benefits in a country that has been ruled by the same party for a generation, Ssentamu says. Now, a new generation of voters is becoming interested in politics.

“It’s a good thing to see various Ugandans attracted to politics,” he says. “Some may genuinely create impact.”

In addition to Ssentamu, gospel singer Judith Babirye and comedian Kato Lubwama are also members of Parliament. As many as eight other entertainers have formally expressed interest in running in elections in 2021.

Entertainers tend to have bold opinions and a thick skin, says Sabiti Makara, a professor in the department of political science and public administration in Makerere University.

“Some of these musicians and comedians are ideologically strong in their own orientation and may have the courage to address the human rights violations taking place in the country,” Makara says.

The singer Ronald Mayinja agrees. He says his career in the music industry has adequately prepared him for the job of speaking for others.

“In music, we face a lot of criticism and have enemies, too, so politics isn’t any different. We have been speaking through music – now we shall still be speaking for people,” he says.

One potential barrier for some would-be candidates is the country’s education requirement for members of Parliament.

Candidates must have an advanced secondary level of education. While some already have degrees, others say they will use the time before the next election to complete the necessary coursework.

Geoffrey Lutaaya, a political hopeful, has been in the music industry for 24 years but comes from a family of politicians. He says he is pursuing his diploma and is set to graduate in a few months.

Lutaaya says he is compelled to join politics to represent his people in Kakuuto County. With his degree in hand, he hopes that his career as a musician will help his political efforts.

“It is their right to test the waters,” she says. “Of course, I don’t think they will change anything.”