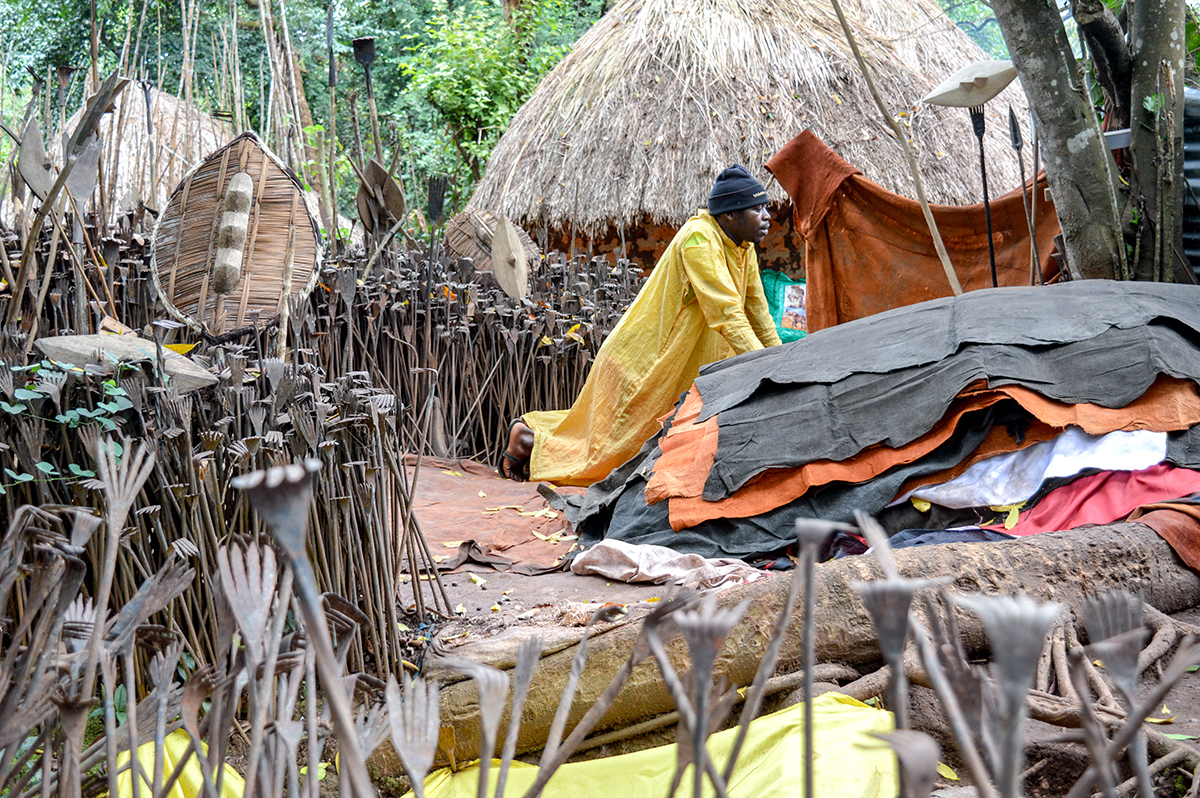 MITYANA, UGANDA — There are two entrances to the pits of death. The first one is marked with a white, metallic gate. The second one is an opening in a reed fence, at the end of a wide, tarmac road, lined with tall trees and neatly kept grass.

Within the fence, there are several grass thatched houses. These dwellings, tour guide Godfrey Sewanyana says, are referred to as the “houses for the rest of the Lubaale.” The Lubaale are the gods of the Buganda Kingdom.

This is Uganda’s historic site of Walumbe, or Ttanda Pits, otherwise known as the pits of death. Here there are hundreds of pits in the earth, ranging from 3 to 7 meters (about 10 to 23 feet) deep, that are said to be connected underground. They are also believed to possess a mysterious power.

Walumbe is located about 60 kilometers (37 miles) west of the capital city of Kampala. Aside from the pits, the site houses thousands of spears – some said to be hundreds of years old – decorative clay pots, bark clothes of different colors and fruit trees. It’s also home to a number of people. 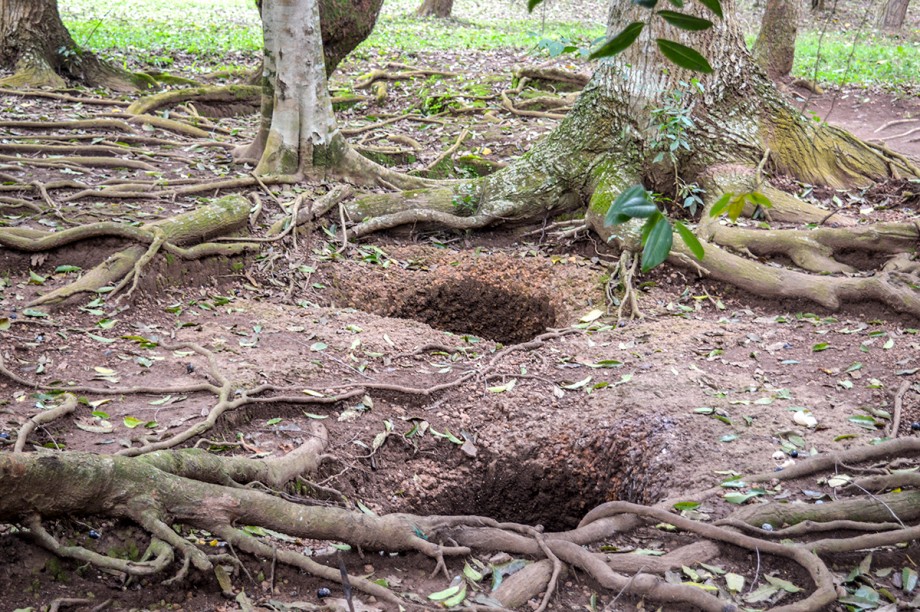 Hundreds of pits, ranging in depth, are scattered throughout the site of Walumbe. It’s believed that Walumbe, the son of Gulu, a god, created the pits as a hiding place when he was running away from his brother, Kayikuzi.

Yet, it’s the legend of the pits that continues to draw crowds from all over the world. The story, Sewanyana says, begins with a family of gods who lived in heaven, and a lonely man who lived on Earth.

Kintu, the man on Earth, had just one cow that he relied on for sustenance – he lived solely off of the cow’s urine and excrement. One day Nambi, the god Gulu’s daughter, visited Earth and found Kintu attractive. They secretly began courting one another and Nambi’s trips to Earth became a frequent occurrence, piquing the curiosity of her brothers, Walumbe and Kayikuzi. They eventually followed her to Earth without her noticing, where they stole Kintu’s cow and returned to heaven with it. When Nambi found out, she pleaded with Gulu to command her brothers to return Kintu’s cow.

Gulu agreed to her plea, but only on the condition that Kintu complete four tasks. Kintu agreed.

The tasks required of Kintu were the following: He must eat hundreds of baskets of food, split a rock open, pick out his cow from a herd of thousands, and fetch water in a basket with holes in it. 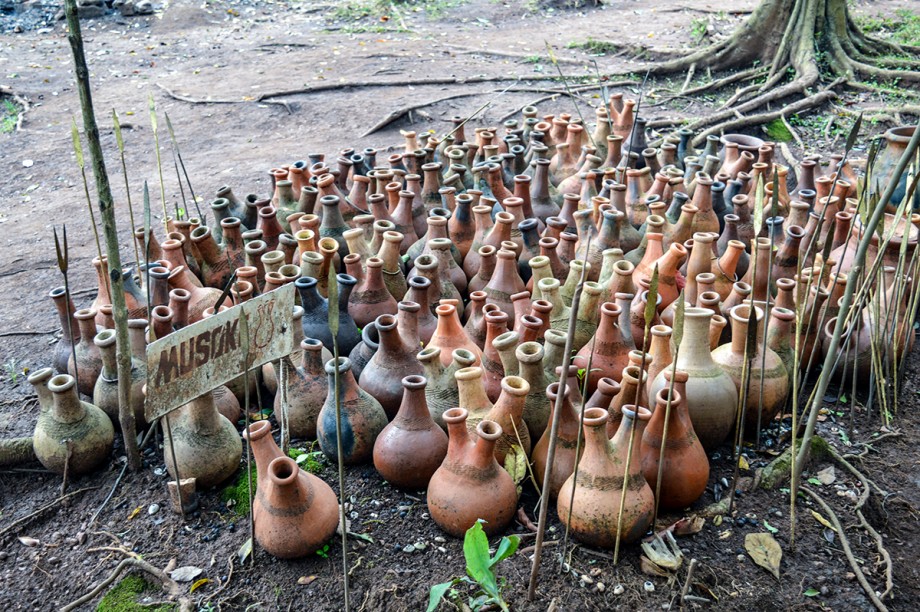 Pottery and spears are among the objects found at Walumbe. As the legend goes, Kayikuzi, the son of Gulu, a god, threw spears at his brother Walumbe in an attempt to capture him and bring him back to heaven.

Kintu completed all the tasks and Gulu was so happy with him that he returned the cow to Kintu, along with other gifts, and allowed Kintu to marry Nambi. He warned her not to notify her brothers about her return to Earth.

When Nambi returned to Earth she realized she had forgotten the feed for her chicken, which she was bringing with her, so she headed back to heaven to retrieve it. When she returned, her brother Walumbe noticed her and again followed her back to Earth. When Gulu learned that Walumbe had followed her, he knew trouble would come to Nambi and Kintu and that Walumbe would bring misery to the people on Earth. So, Gulu sent Kayikuzi to Earth to take Walumbe back to heaven.

Walumbe did not want to return and a chase between the brothers ensued. Determined not to be caught, Walumbe dug holes in the earth. He would go into hiding within one, and then appear in another one. Kayikuzi, determined to catch his brother – dead or alive – used hundreds of spears in his hunt for Walumbe. Eventually Kayikuzi became weary, gave up and returned home, leaving Walumbe on Earth.

“The holes are said to have claimed lives for hundreds of years. That is why they are referred to as pits of death by some people,” Sewanyana says. “But we have closed some, and during worshipping in the night we advise people to be careful not to fall in the pits.” 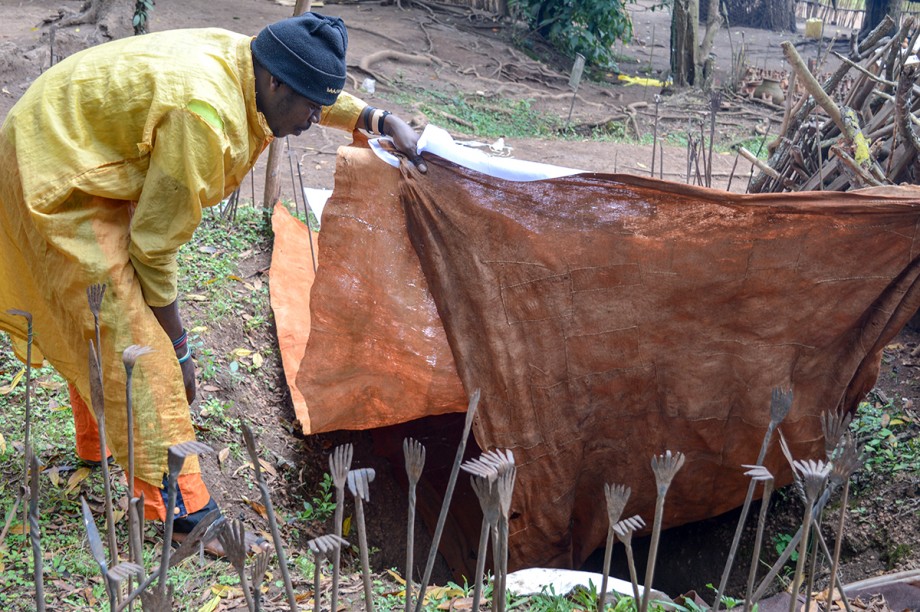 In an attempt to prevent people, especially children, from falling in the pits, Walumbe tour guide Godfrey Sewanyana says they’ve covered a number of the pits with tarps.

Today the pit where Walumbe is said to have made his final rest is a place of worship.

“These clothes cover the pit where Walumbe finally rested. They are brought by his followers seeking blessing and guidance,” Sewanyana says. “Every week, the heap gets bigger and higher and when it reached a certain level, we remove the entire bark cloth to give room for other worshippers.”

However, not everyone who ventures to the site are there to worship death – Sewanyana says that some refer to Walumbe as “Bulamu,” which means life.

“Students will come to see if really the talked about place they learn in history at school does exist,” he says. “Some people come for spiritual purposes to seek blessing from Lubaale Walumbe, some come as tourists, both local and foreign.”

There are several smaller shrines at Walumbe Ttanda that are dedicated to other Buganda gods.

“Because this is where human life started in Buganda, spirits of other gods are also summoned in this place,” Sewanyana says. 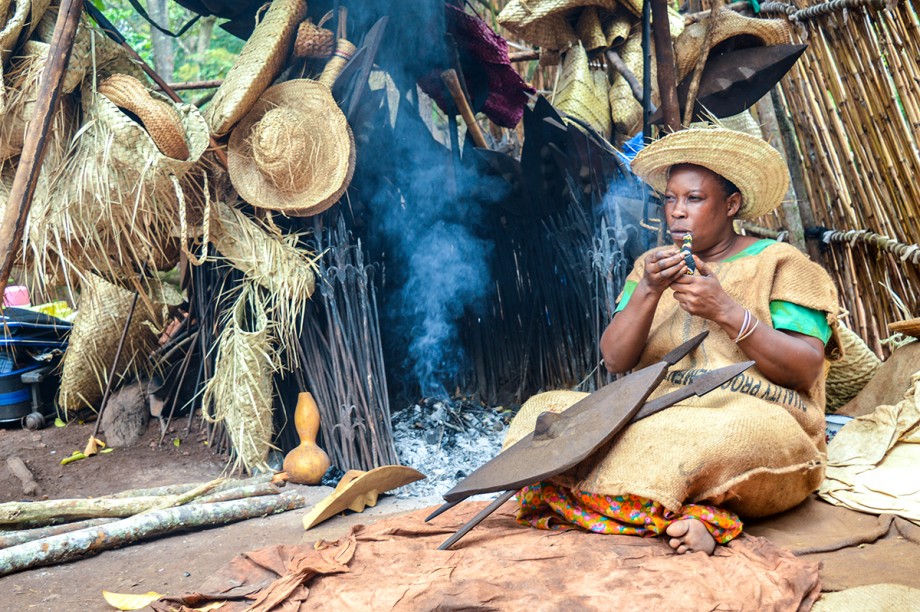 A worshipper smokes an emindi, a traditional worshipping pipe, at Walumbe.