Skip to main content
The story you are reading was published on Sunday November 5, 2017. To read more recent stories click here. 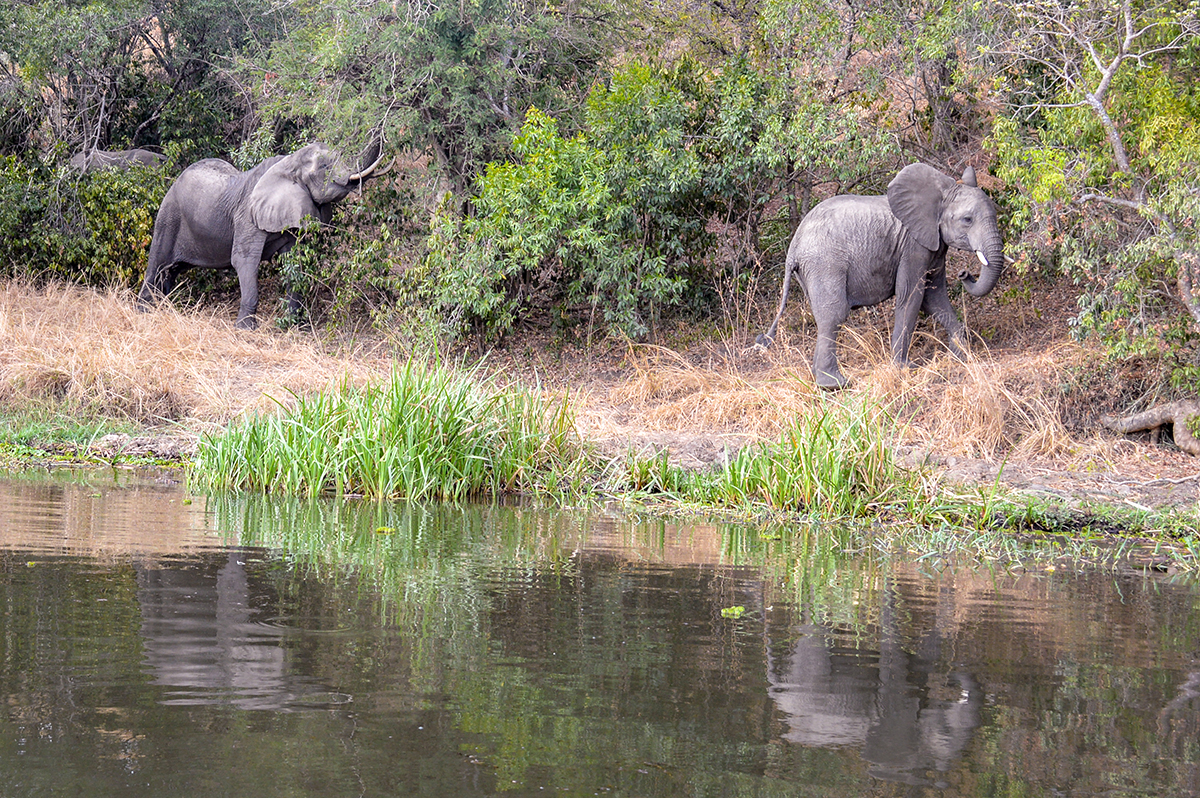 That was two years after commercially viable oil deposits were discovered in Uganda’s section of the Albertine Rift, the western portion of the Great Rift Valley.

Murchison Falls National Park is a key part of a wildlife-protected area, home to elephants, lions, giraffes, crocodiles, hippopotamuses, buffalo and other animals, including 451 species of birds. The Nile River bisects the park before plunging over the valley wall, creating the dramatic Murchison Falls, from which the park takes its name.

The people who reside in and around the park have lived peacefully alongside the animals, each generally keeping to separate areas.

Olum’s village is alongside the park’s northern border. When he saw the damage in his cassava garden, he knew those peaceful days might be over.

Since then, his other crops, too, have been consumed.

“On the first Sunday of September, I went to my watermelon garden in the morning and found out that much of it was destroyed, eaten by the elephant from the park,” he says. “There was a huge chunk of elephant feces in my garden.”

Oil drilling hasn’t even started yet – government officials expect it to begin in 2020 – but already local people say the delicate balance that enables humans and wild animals to live side by side is askew.

Two people were killed by elephants early this year, says Ben Okot, the council chairman for Purongo sub-county. At least 10 people have been injured, he adds.

However, government officials deny that oil-related activity in the park has affected the wildlife much, if at all.

“We are very particular about wildlife and environmental protection in this park,” says Tom Obong Okello, assistant director of the Uganda Wildlife Authority and manager of the Murchison Falls conservation area. 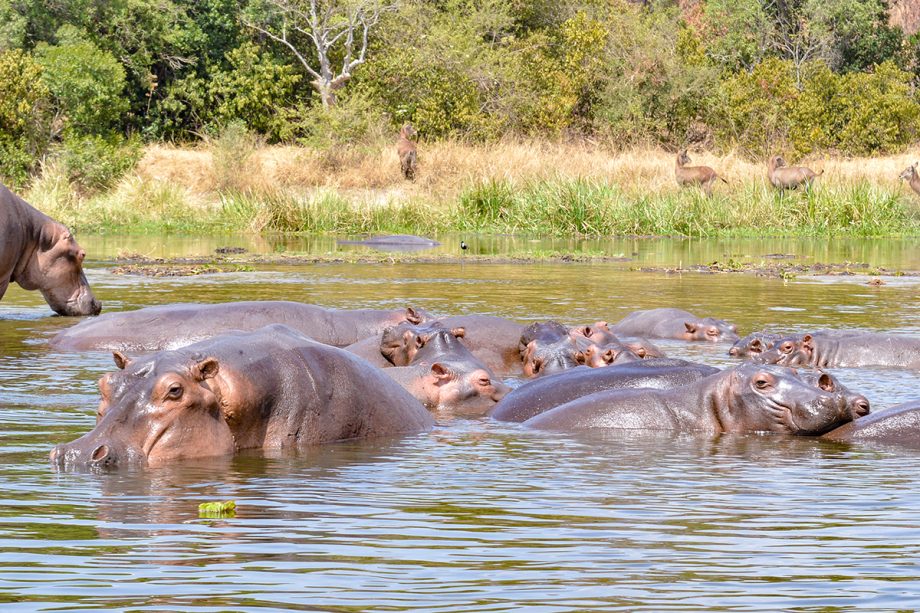 Hippos swim in the Nile River at Murchison Falls National Park in Uganda.

Some places, such as breeding grounds, are off-limits to oil companies, Okello says, even if oil is found there.

But he adds: “Unless they can access it from underground, with appropriate technology.”

Uganda’s excitement about possible oil wealth is palpable. Across the country, people are signing up for courses in the hope of getting lucrative jobs in the industry. (Read our story about that here.) Estimates suggest that oil revenue could add up to$2 billion per year to an economy with a $25.5 billion annual gross domestic product.

People like Olum, who are concerned about how oil production will affect their lives, worry that the government isn’t taking enough care to ensure that wild lands and the people who live near them are protected.

GPJ’s multiple requests to interview officials at the Wildlife Conservation Society in Uganda, which has researched the potential impacts of oil activities, were declined because officials there said they needed permission from Total E&P to speak with the media.

Multiple phone calls and emails from GPJ to Total E&P went unanswered. A GPJ reporter visited Total E&P’s offices twice but was not able to speak with anyone.

According to the company’s website, it uses environmentally-friendly technologies in the park.

Okello says the exploration process involved removing topsoil as well as compacting roads to prepare them for heavy machinery. Most of the area has been restored, he says.

“Now, when you visit the same places, you can’t tell if oil drilling and exploration happened there,” he says. “And the places will stay the same during oil production.”

While Okello downplays the impact of oil exploration, a 2011 study completed by his agency, the Uganda Wildlife Authority, together with the Wildlife Conservation Society and USAID, the U.S. government’s international aid agency, found that oil operations did negatively affect large mammals, pushing them up to 1,000 meters away from the exploration sites.

A second study, dated October 2015 and conducted by the Uganda Wildlife Authority and the Wildlife Conservation Society for Total E&P, found that elephants actively moved away from oil exploration activities.

In 2016, yet another study, this one by the Wildlife Conservation Society and Greater Virunga Transboundary Collaboration, echoed those findings.

Travel within the conservation area is tightly restricted. It’s difficult to move freely, but a GPJ reporter who visited one section, which appeared to be untouched by any sort of drilling or construction equipment, was told that oil exploration had occurred there.

Local people and environmental experts don’t believe that oil-related activities have been innocuous.

“Elephants don’t like noise,” Okot says. “So during the drilling activities, the machines they used in the park caused noise, forcing the animals to enter the near communities and feed on people’s crops, like cassava, millet, rice, watermelon and maize.”

That shouldn’t be surprising, Okot says. After all, the area is part of a historic wildlife movement corridor, stretching all the way north into South Sudan, in which animals and humans have known their place, largely avoiding each other.

But the oil activities have pushed wildlife into local communities, he says, creating dangerous situations for both sides.

When animals try to move today as it was in the past, they encounter humans because of the boundaries, causing conflicts.Dr. Eric Enyeil, a senior warden at Murchison Falls National Park

“In the past, there were no boundaries between the park and the communities,” he says. “Animals could move freely to South Sudan because the communities we regard as belonging to people today served as corridors for animal movements. When animals try to move today as it was in the past, they encounter humans because of the boundaries, causing conflicts.”

While increased human activity creates tension between people and animals, the noise from major projects such as oil exploration can dramatically change the way animals behave.

“When drilling well pumps and compressors, noise is created, which could damage and destroy wildlife hearing,” says Andrew Muwanga, a professor who specializes in environmental and engineering geology studies at Makerere University. “The same noise masks communications by wildlife, the communication used to attract mates or defend territories.”

Birds abandon their nests, he says, leading to a truncated breeding season.

Then there’s the concern about an oil spill. If that happens, the contamination could be widespread and long-term, Muwanga says.

“Grass could change color, or die and never be able to grow again in that very place,” he says.

Naomi Namara Karekaho, a spokeswoman for the National Environment Management Authority, says her agency has clear plans for handling oil leaks if they occur, but she did not discuss details of those plans.

For local people, the most immediate concern is enforcing the boundary between where animals roam and people live.

Jackson Kinyera, a farmer whose land borders the park, is one of more than 100 wildlife scouts, trained by the Uganda Wildlife Authority, who patrol the boundaries to keep elephants from encroaching on neighboring villages. They use loud noisemakers, including vuvuzelas and whistles, to scare animals from gardens.

“But they still find a way to come to our gardens and feed on our crops,” he says.

When 2020 comes and oil exploration begins in earnest, Kinyera says, the problem is likely to get much worse.

“I am afraid more elephants and buffalo will be forced to leave the park once oil production starts, because of the noise, which means we will be facing more gardens’ destructions and human conflict,” he says.