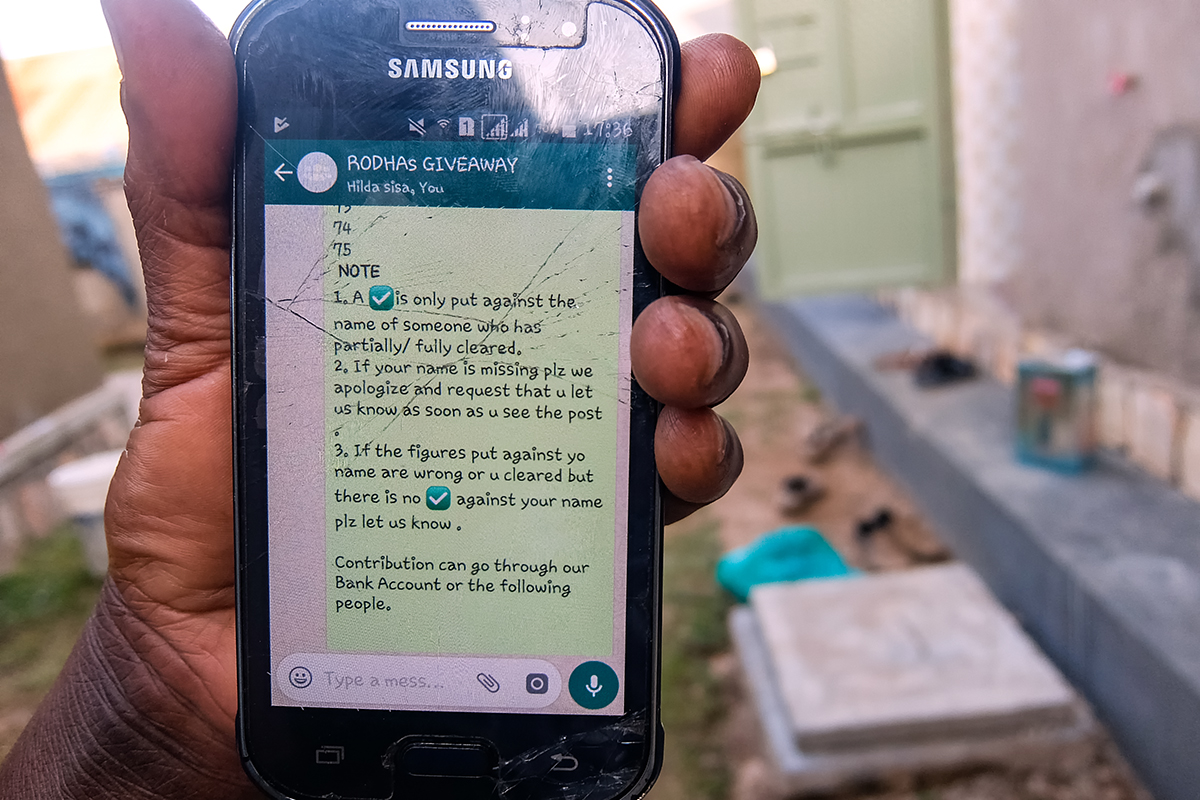 KAMPALA, UGANDA — Steven Niwareeba, a clothing vendor, divides his attention between a browsing customer and his buzzing phone. He sets the mobile device down for a few minutes but quickly picks it back up when the screen lights up.

“You see, I’m in seven wedding groups, and I have to make a contribution for each of these,” he says. Niwareeba uses WhatsApp, a cross-platform messaging application on his phone, to stay in touch with family and friends. The app’s group chat feature allows users with Niwareeba’s phone number to add him to a conversation with multiple contacts.

The seven groups he’s recently joined were set up by couples-to-be for the purpose of gathering donations for their big day, he says.

It’s not uncommon, he adds.

Niwareeba gives between 50,000 and 300,000 Ugandan shillings ($13 to $80) to each couple or chat group administrator, depending on his relationship with them.

“I contribute more when I have fewer functions to contribute to,” he says.

In October, he gave 800,000 shillings ($214), about 25 percent of his earnings that month, to friends who were hosting events. But that doesn’t turn him off. Rather, he feels giving is a part of his obligation as a friend and member of society.

WhatsApp groups, such as the ones Niwareeba belongs to, are gaining popularity among Ugandans as the holiday season approaches. From end-of-year corporate gatherings and family Christmas parties to traditional wedding ceremonies and baby showers, the group chats serve as an invitation, planning platform and call-out for donations. While some group members deem this method of raising money effective, others call it a burden.

As many as 1 billion people around the world use WhatsApp every day. Despite a law implemented in July that requires Ugandans who want to use Facebook, Twitter, Snapchat, WhatsApp and other social networking services to pay a tax of 200 shillings (5 cents) a day, WhatsApp remains one of the country’s leading messaging apps.

Some 19 million Ugandans, nearly half of the country’s total population, are connected to the internet, according to Internet World Stats, a global statistics portal. About 55 percent of those with an internet connection use WhatsApp, according to the National Information Technology Survey for 2017-18.

Ugandans are changing the way they use WhatsApp and other social networks, but there are drawbacks, says Anita Nakaweesa, social media manager and customer care representative at Kampala Smokehouse, a restaurant in the capital, Kampala. Some group administrators add people to groups without their consent and later send out event invites based on who gave or how much was given, Nakaweesa says. In her opinion, this system creates unnecessary pressure for members of the group who choose not to give and could potentially cause relationships to go sour.

“People don’t understand,” she says. “They assume when somebody is waking up every morning that you have extra to give, yet they may have siblings to look after or bills to pay.”

Gloria Maiga, who works at a local development organization and is a member of multiple WhatsApp event groups, shares a similar sentiment. She says members of fundraising groups often feel obliged to donate, so they are not seen as anti-social or feel embarrassed when group administrators post a thank you message in the chat, with a list of names of those who have given money.

People don’t understand. They assume when somebody is waking up every morning that you have extra to give, yet they may have siblings to look after or bills to pay.Anita Nakaweesa

Charity Kekuruuso, a recent university graduate, has experienced this firsthand.

“I was in four WhatsApp groups before, now I am in about eight WhatsApp groups,” she says, all of which were set up to collect donations for traditional and church wedding ceremonies. She says she’s not even close with some of the group administrators. They got her number through mutual friends.

It can cost up to 30 million shillings ($8,042) to have a wedding in Kampala for 100 guests, she says. Venues are expensive, she adds. While Kekuruuso recognizes that having a wedding can be expensive, she says giving should be voluntary and those who aren’t able to contribute shouldn’t be called stingy.

“When you exit [the group] or just remain quiet without making any contribution, you may be viewed as mean,” she explains.

WhatsApp to communicate with people and collect 28 million shillings ($7,549) from them. She invited 250 people to join her group chat and came up with a budget knowing that she would receive donations from 80 percent of them, she says.

“Attendance for my function is by contribution, so WhatsApp helped me organize a group where we can see who has contributed and who has not, so we know who to invite and who not to invite,” says Babikanyisa, who says she has contributed to others’ events in the past.

Some of her guests also pledged gifts on the group. She says one member gave her a cow for the function.

Babikanyisa says WhatsApp made it possible to organize the event transparently.

“We post who has sent in money and the amount,” she says.

At the same time, members of the group are encouraged to contribute once they see that others are doing it, she adds.

Local experts have their own take on the emerging trend.

Organizing and financing events using social networking apps and sites eases communication and helps the event planners get donations ahead of their special occasion, says Rosebell Kagumire, a journalist and social media expert.

But Ugandans must use what she calls “giving etiquette.”

It is the responsibility of group administrators to invite the people closest to them to these groups, she says. Equally, invitees should be their own advocates.

“I take these requests as any other form of unwanted messaging, and there are options to respond or not,” she says.
Nakaweesa also advises people to weigh their priorities as they give.

“Contribute where you can,” she says. “Go with the closest and what you can afford.”

Editor’s note: The image that originally accompanied this story was removed after questions were raised about the  expectations of privacy afforded a person pictured.