LUWEERO DISTRICT, UGANDA — It’s 11 a.m. and this eleven-year-old girl should be in school. Instead, she’s keeping watch over her mother’s rice field and fruit garden.

Between 9 a.m. and 5 p.m., when she’s on watch, her mother, Hadija Nakirya, passes by occasionally to check on her.

The little girl, whose mother did not consent to publishing her daughter’s name, is missing school again today because she has an important role in the family. She is a watchman of sorts, keeping an eye out for monkeys.

“I have to tend the family garden,” she says in reply to a question about why she is not in school. “The birds and monkeys will spoil our gardens and we will starve.”

In the Luweero District, in the central region of Uganda, primary-school-age kids work to protect their family gardens and rice fields from pesky monkeys who sneak in to feed. 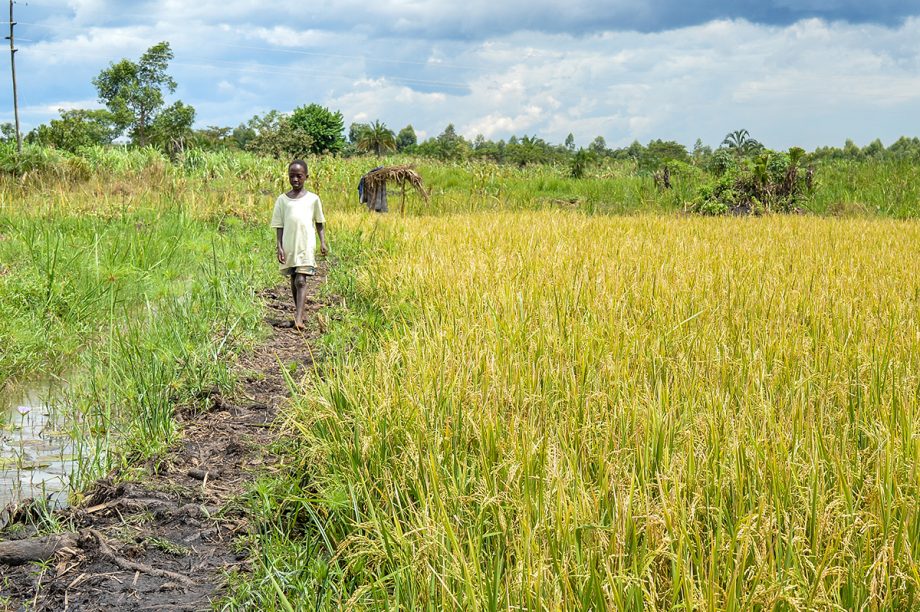 A girl patrols the border of her family’s rice field in the Luweero District of Central Uganda. As absentee rates in the area rise, authorities are patrolling the area to try to get kids back in school.

Armed with stones ready to hurl at intruders, two boys about the same age stand in attention in a nearby garden. They, too, are missing school – a fact that Salim Zimula Sserunkuuma points out as he approaches the boys. His job, as a local area councilor, is to get these kids back in school. So he walks through the area daily, quizzing parents and looking for kids when they don’t turn up in school.

“There are no monkeys in the vicinity,” Sserunkuuma tells the two boys, coaxing them back to school.

One boy responds that there are no monkeys to be seen because the boys are there, and if they leave the monkeys will surely turn up.

This has become a daily battle between local officials and families, who say they want to send their children to school but have no other options for staff to guard their crops of rice, guavas, avocados and bananas. Nearby untended gardens and fields have become home base for many monkeys, they say.

“They are a menace,” says Rehema Ingabire, a resident in the area, referring to the monkeys. She says she wishes they could just be killed rather than allowed to wreak havoc and cause starvation.

As a result, enrollment in local schools is down and dropout levels are on the rise. 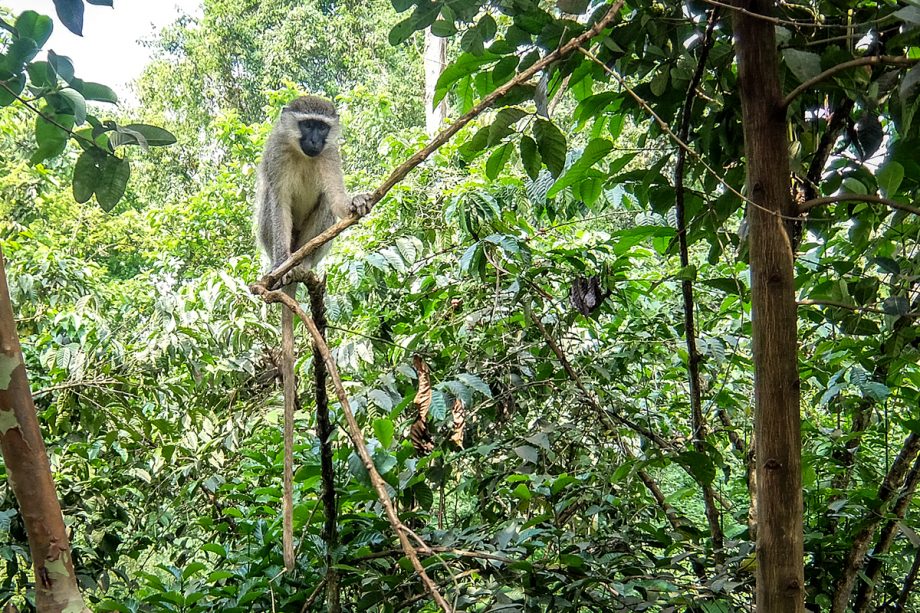 A vervet monkey lingers near a local farm in the Luweero District. Monkeys have become such a nuisance that a rising number of parents opt to keep kids out of school in favor of guarding crops from such pests.

In the Luweero District, exact numbers are unconfirmed, but a 2014 study by UWEZO Uganda, a literacy improvement organization, found that 41 of 100 pupils were absent on the day of a researcher’s school visit.

Similarly, on a school day in November, when Global Press Journal visited Kyambogo Primary School in the Luweero District, 35 percent of enrolled students were absent, with just 300 of the 460 enrolled students in attendance.

Parents say they don’t want their children to miss school, but the alternative is worse.

“Both school and food are important so the children have to divide roles,” Nakirya says, explaining the reason she often keeps her daughter out of school and on monkey patrol. “If there is no food, the children will die of hunger and also when the food is harvested, it will be sold and give them part of the school requirements.”

But for Sserunkuuma, absentee rates in classrooms across the district have become distressing for local education and government officials.

“Children’s absenteeism is worrying many officials in the district,” he says.

Local radio stations have started airing weekly sensitization campaigns alerting parents to the dangers of leaving their children in the fields as opposed to the classroom, says Enoch Kiyemba, a senior education officer in the district. Similarly, local village councils are getting involved, working to ensure that parents follow the law and send their kids to school, he says.

“It is true parents keep children behind for want of assistance in home chores,” Kiyemba says. “We are encouraging teachers to sensitize parents about the value of education. We emphasize to them that education is the key to any development of a country and region.”

Irene Senkima, a head teacher of Kyambogo Primary School, says responsibility for the safety of their families’ crops is having a major impact on children learning, as literacy rates in the district are low and the dropout rates are high.

“Absenteeism is a big threat to the school,” Senkima says. “Children disappear for weeks and when they finally show up, they confess that they were not sick but they were protecting their crops from pests.”

“The others are out there, toiling away,” Senkima says.

Beyond the impact on individual children, absenteeism has other consequences. Since the government provides a grant of 7000 Ugandan shillings (about $2 USD) per enrolled child, soaring dropout rates mean that schools in the area will have fewer and fewer resources.

“This leaves all of the children and their parents wanting,” Senkima says.

Government officials say they are ready to take enforcement to the next level.

“We are doing all that is possible to get children back to school,” says John Byarugaba, a regional standard unit officer for the district. “We have even engaged police, if children are found in gardens in school hours the parent will be answerable.”