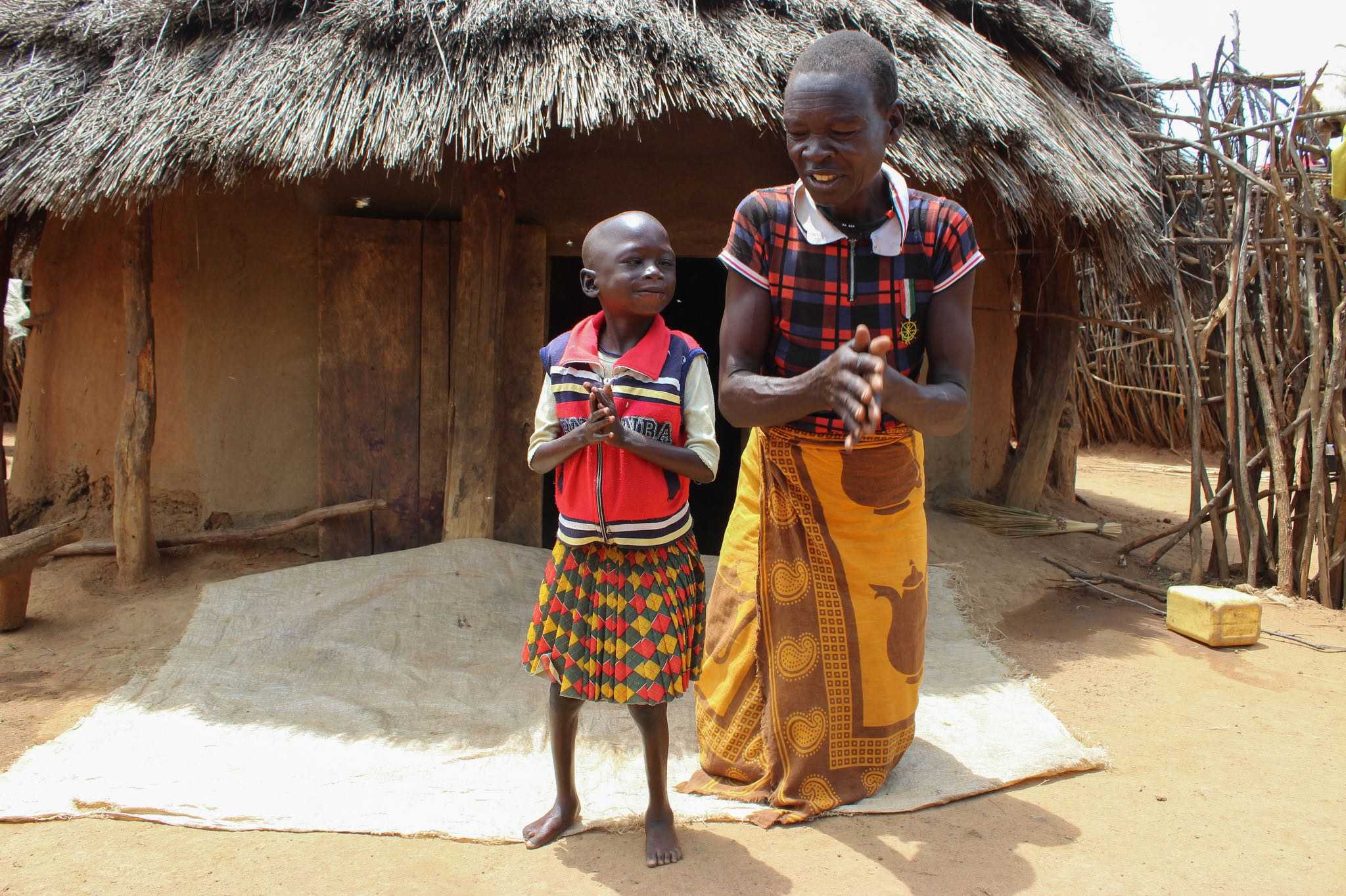 KOTIDO, UGANDA — Five-year-old Sarah Losike slowly lifts her feet off the ground, claps her hands and moves her thin body from side to side. She is imitating her grandmother, Lomise Lina, who kneels on a mat outside their home in the village of Lologoka, Kotido district. The play seems repetitive, but Lina says she never tires of entertaining her granddaughter because it’s a miracle that the little girl is still alive.

“Sarah was just hours away from death when a good Samaritan saw her condition and decided to help with food,” Lina says.

That was in June 2022. A few days after the intervention, Sarah was enrolled for nutrition at the health center, where she was put on daily rations of Plumpy’Nut, a highly fortified peanut-based paste that is used to treat severely malnourished adults and children.

Looking around, it is difficult to understand how people here could be facing severe malnutrition. The area is bucolic and lush with green vegetables and tall stalks of sorghum and sunflowers. There is plenty of livestock, mainly cattle, sheep and goats, herded along the earthen roads. But this is all recent.

For the past two years, the people of Uganda’s Karamoja region have not been able to grow enough food because violence that had ended with a government-led disarmament more than 15 years ago has returned. The renewed violence, which has been blamed on Karamoja cattle rustlers armed with guns, has made people too afraid to go about their farming activities, leaving them and their children at risk of starvation.

Between March and July 2022, 518,000 people in Karamoja experienced severe food shortage, including more than 91,000 children who were severely malnourished and 9,500 pregnant women who needed treatment because they did not have enough to eat, according to an analysis by Integrated Food Security Phase Classification, an organization that provides policymakers with research about food security. 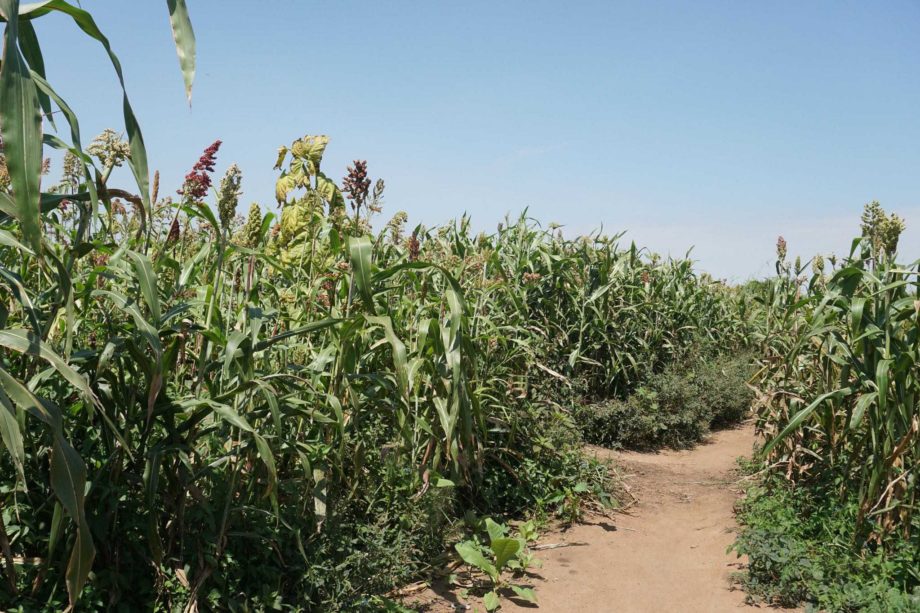 Sorghum stalks grow in Lokitelakebu, Kotido district, Uganda. For the past two years, the people of Uganda’s Karamoja region have not been able to grow enough food because of an increase in violence.

By July, 2,465 people in the region had died of starvation, according to another report by the European Commission. The report also cites climate shocks and hazards, poor rainfall across the region, increased food prices, seasonal crop and livestock pests, and diseases as some of the key contributors to the region’s acute food insecurity.

Malnourished children like Sarah have become too common, says Dr. Achar Cerino, the district health officer in Kotido, one of the nine districts that make up the Karamoja region.

“In June, we registered between 2,500 and 3,000 cases of children between the age of 5 and 6 years old with moderate malnutrition, and 1,500 were severely malnourished,” he says.

Sagal John Baptist, the head teacher at Nachele Primary School in Moroto district, says at the beginning of the school term in May 2022, his school had 439 students, but only about 200 completed the term in August. He thinks one of the reasons some of the children continue to come to school is the free lunch it provides with help from the World Food Programme.

“When you look at them, most are malnourished,” Sagal says.

A United Nations Children’s Fund analysis in September of the humanitarian situation in Karamoja found that more than 20,600 children under 5 years of age, out of nearly 295,000 screened, were treated for severe malnutrition.

Paska Angom, the parish chief of Lokitelakebu town council, says 127 deaths occurred in her community. She says before the violence began, people used to travel far to grow food crops because there was more land away from their homesteads.

“People stopped cultivating their faraway fertile farmlands for fear of being attacked or killed by cattle rustlers, so they started to farm near their homes,” Angom says. “But the land close to home is not as fertile and the farming is on a small scale, so they can’t produce enough food.” 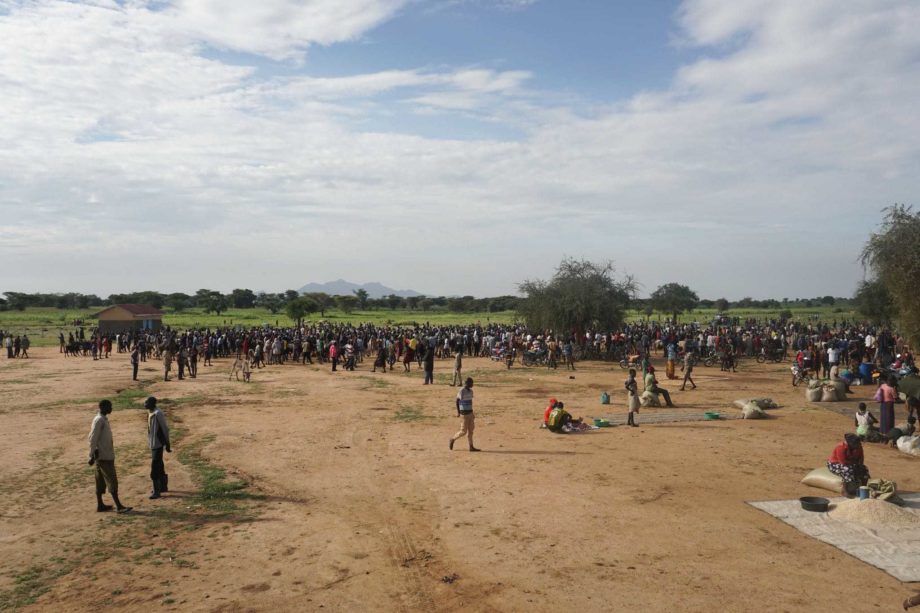 The outbreak of the coronavirus pandemic led to further disruption, preventing people from traveling to markets where they might have sold their livestock to buy what they could not grow, adds Kizito Iriama, the Local Council 1 chairperson of Panyangara subcounty in Kotido district.

“That has contributed to increasing levels of poverty, and some people have resorted to crime with use of trafficked illegal guns from Kenya and South Sudan,” Iriama says.

Also, the restrictions the government places on how the people of Karamoja can use their land have added to the food crisis by forcing people to travel long distances to find arable land, says David Koriang, the Local Council 5 chairman for Moroto district.

In the 1960s, more than 90% of the land in Karamoja was set aside for wildlife conservation. The Karamojong, as the people of Karamoja are known, were still able to access the land, which even today many consider communally owned. The Karamojong, who are mostly pastoralists, could move freely within the land in search of pasture and to grow food. Then in 2002, Parliament introduced a new land tenure system that placed more than half of Karamoja land under government ownership. Although the new law meant that ordinary Karamojong could own land privately, many were not aware of the changes.

“The Karamojong now find themselves blocked from accessing their own land by non-Karamojong, who have been given land titles by the government for mining and other purposes,” Koriang says. 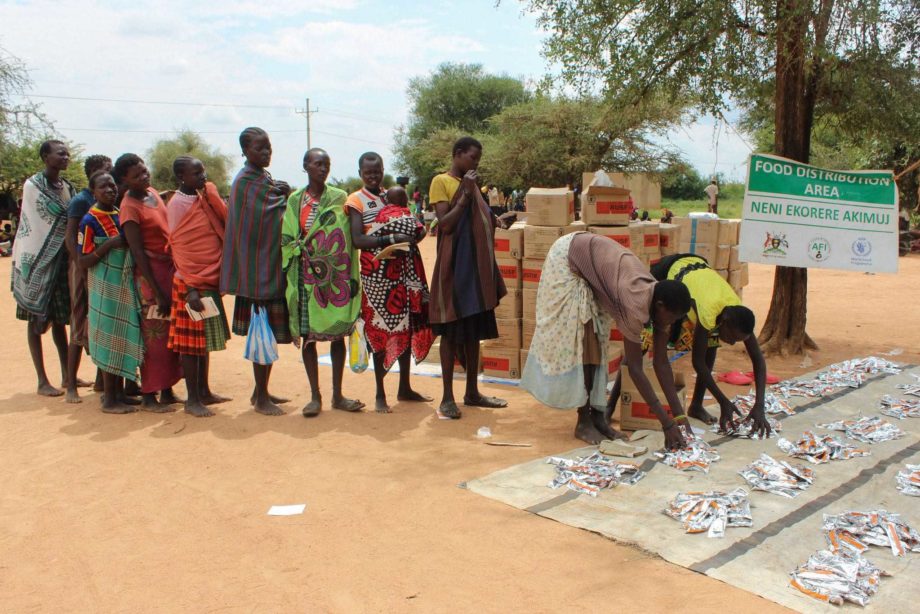 Residents line up to receive food relief items in Kotido district, Uganda. A return of violence driven by cattle rustlers armed with guns has interrupted farming and led to a severe food shortage.

“With the help of local leaders, we were able to identify only the vulnerable people, and these included children below the age of 5 and the elderly above the age of 60,” Angom says.

Davina acknowledges there have been challenges in the distribution of relief. But she says most of them were at the subcounty level, including local leaders failing to conduct adequate vulnerability assessments, failing to obtain proper beneficiary identification and, in some instances, asking for bribes before giving people relief. She says the government cannot give everyone food, but it plans to provide the Karamojong with seeds early for planting.

“There is a holistic approach that includes bringing together ministries and other partners to work on more sustainable solutions to the problem of hunger in Karamoja,” Davina says.

Achela Lokwang, a grandmother of 13, was among those to receive food relief. She sits outside her hut with legs stretched in front of her. Her skin looks dehydrated, her mouth is dry, and her collar bones are visible, making her look a lot older than her 74 years. The food aid she received only lasted a few days. Now she wakes up and sits in front of her home, hoping for the next relief to arrive.

“I feel sick and hungry all the time,” she says, stretching her hand. “That is why I look like this. I feel dead inside.”

Sarah’s grandmother, Lina, does not have enough food either. She survives on one meal a day. Sarah is still on Plumpy’Nut but has not recovered fully. Her limbs look too thin for a 5-year-old. She moves delicately and slowly, and her bloated stomach can be seen through the jumper she’s wearing. But her grandmother says she’s improving.

“I have noticed changes in her, both physically and mentally,” Lina says. “But I worry about her going back to the way she was.”