The Nakivale Refugee Settlement is home to more than 94,000 refugees, many of whom experienced trauma before they escaped from conflicts in nearby countries. The camp’s only entrepreneur network, Opportunigee, is now behind new programs using art therapy to help transform the lives of refugees, especially children.

Photo at top: Telesphore Ndayishimye, a teacher at an early childhood center in the Nakivale Refugee Settlement, volunteers with NakivArt. He hands out pieces of paper and coloring pencils to eager children at the settlement’s reception center, during a Tuesday art therapy workshop.

ISINGIRO, UGANDA — With miles of homes, many with UNHCR-labeled tarps as roofing, the Nakivale Refugee Settlement in southwestern Uganda is one of the oldest and fastest-growing refugee camps in the country. Uganda’s authorities say some 94,000 refugees are living in the camp, as of September.

But Nakivale isn’t the only community in the country experiencing a large influx of displaced persons from conflict-ridden nations nearby, as Uganda is hosting some 1.4 million refugees in total.

While the government has created progressive policies for the refugees, such as the right to work and to own businesses and property, those who now call Uganda home say those policies neglect their mental health needs.

“Trauma is a big issue in my community,” says Patrick Muvunga, a refugee who came to Uganda eight years ago to escape conflict in Democratic Republic of Congo. Many of Nakivale’s settlers witnessed traumatic events before setting out on their journey to Uganda, yet there are no government-run psychosocial support services for them at the settlement, Muvunga says. Some have turned to drugs and alcohol to cope, he adds. But he wants to break this cycle.

Run by refugees from DRC, Burundi and other countries, Opportunigee is the first and only entrepreneur network in Nakivale. Some of its members have started art-therapy initiatives to help young refugees move on from their pasts. 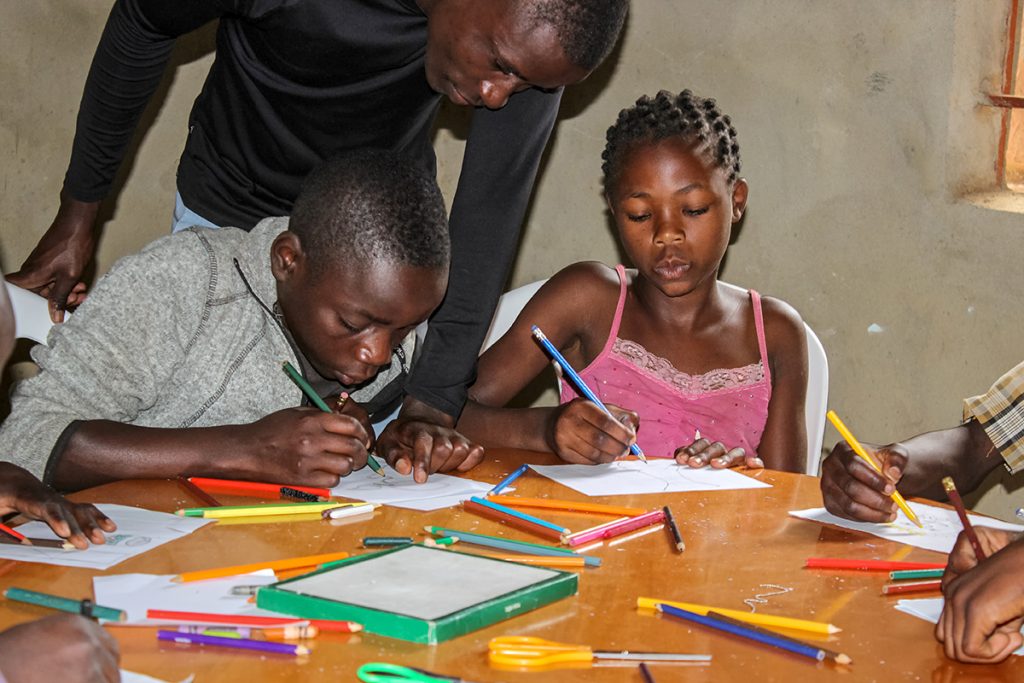 Since 2014, NakivArt, an art collective founded by members of Opportunigee, has been hosting art therapy workshops for young refugees at the Nakivale Refugee Settlement. The workshops take place each week on Tuesdays and Saturdays. Up to 100 children attend the Tuesdays workshops, while about 12 people participate on Saturdays, says Olivier Nzazu (center), a Congolese refugee and mentor with NakivArt. Nzazu’s job is to provide a supportive environment where the children can talk openly about traumatic experiences, use art to express their feelings and to overcome stress, and learn how to become better artists. 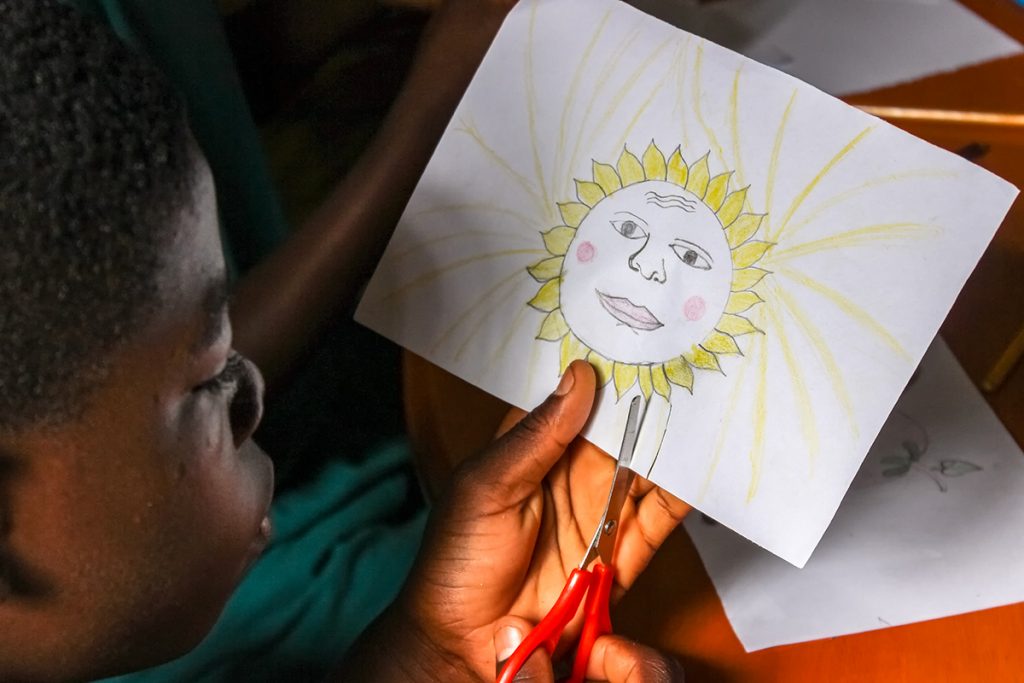 Lucien cuts out his drawing of a smiling sun. The 15-year-old has been participating in the NakivArt workshops since he came to Uganda from DRC two years ago. During this two-hour workshop held in early October, he told Global Press Journal that he had come to Uganda on his own and doesn’t remember his last name. Lucien, who now lives with a foster family in the Nakivale Refugee Settlement, says he enjoys the art therapy sessions and has made new friends through NakivArt. 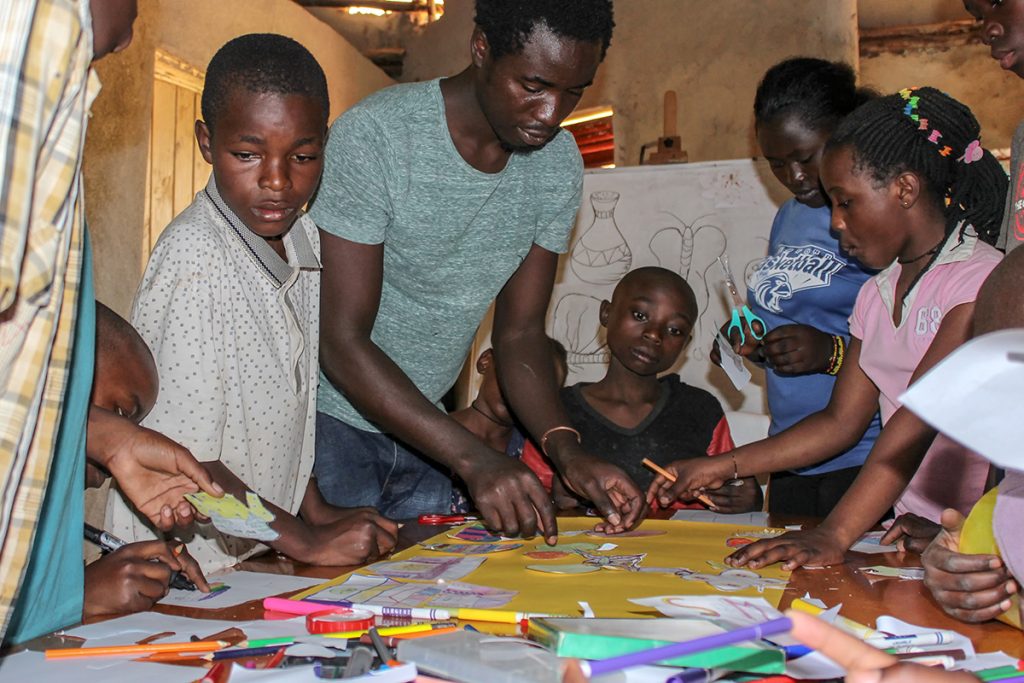 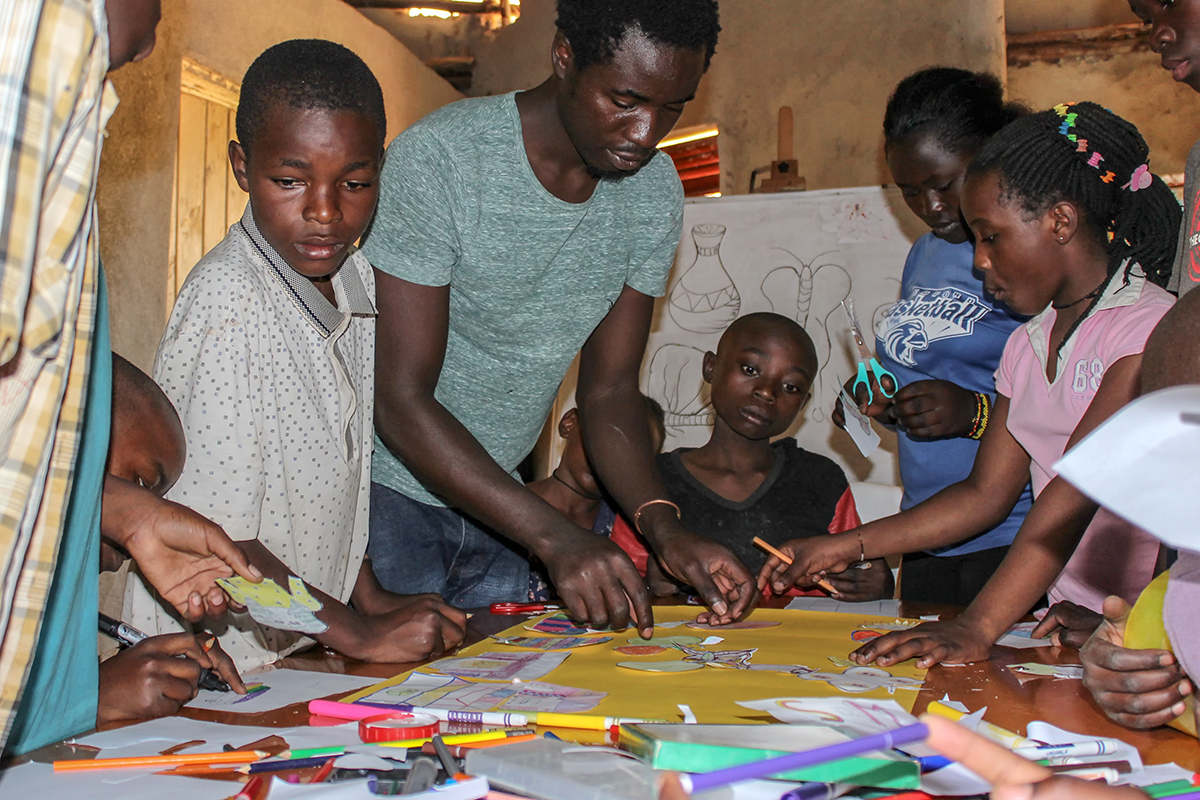 The children glue their work to a large poster. The children are asked to explain why they chose to draw what they did. William Butala (second from left), NakivArt coordinator, says children who come to the workshop for the first time are often nervous and don’t participate in the activities. But, over time, mentors help them build the confidence to do so, he says. 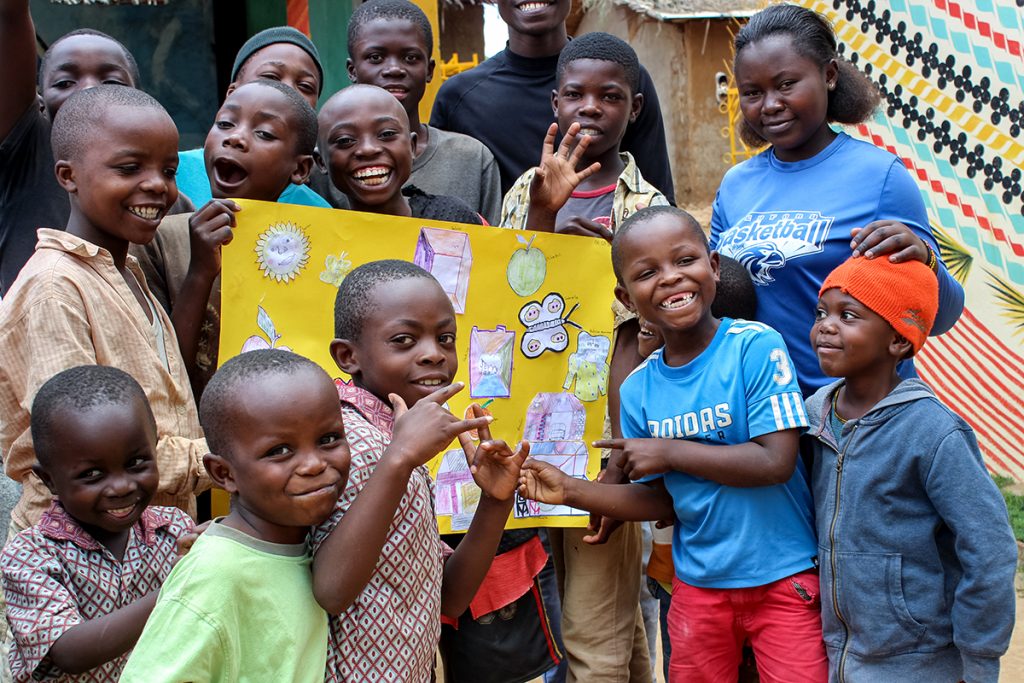 Children show off their group art project from a Saturday workshop. 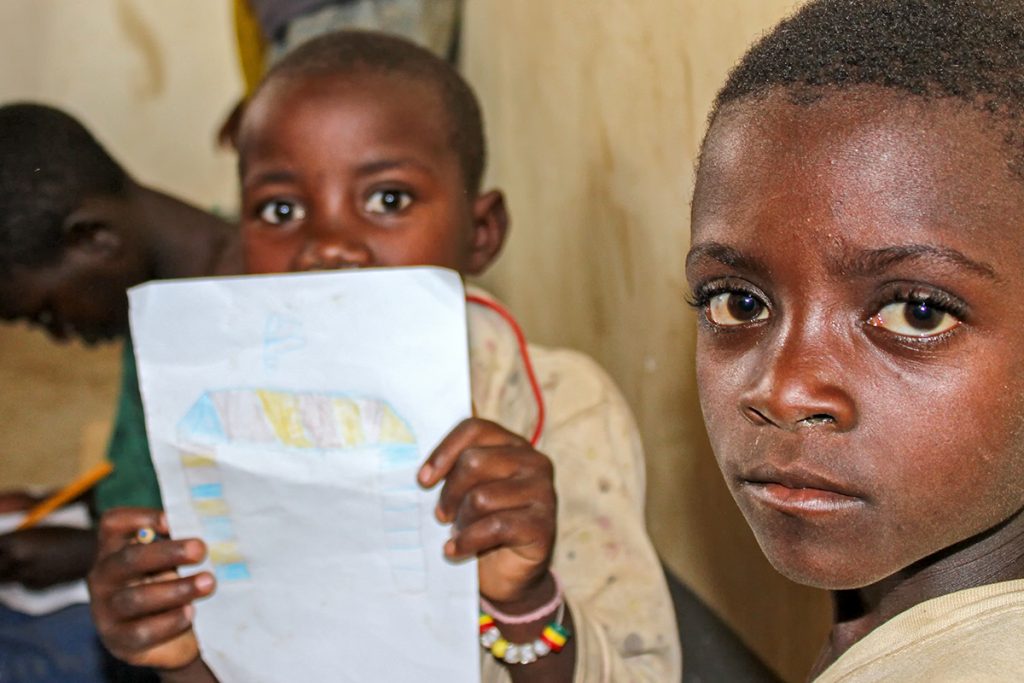 (L-R) Jacques Ro Virunguyi, 10, shows his work next to his friend, Yvan Msco. Tribal clashes brought Virunguyi, his mother and brother to Uganda from DRC three months ago. 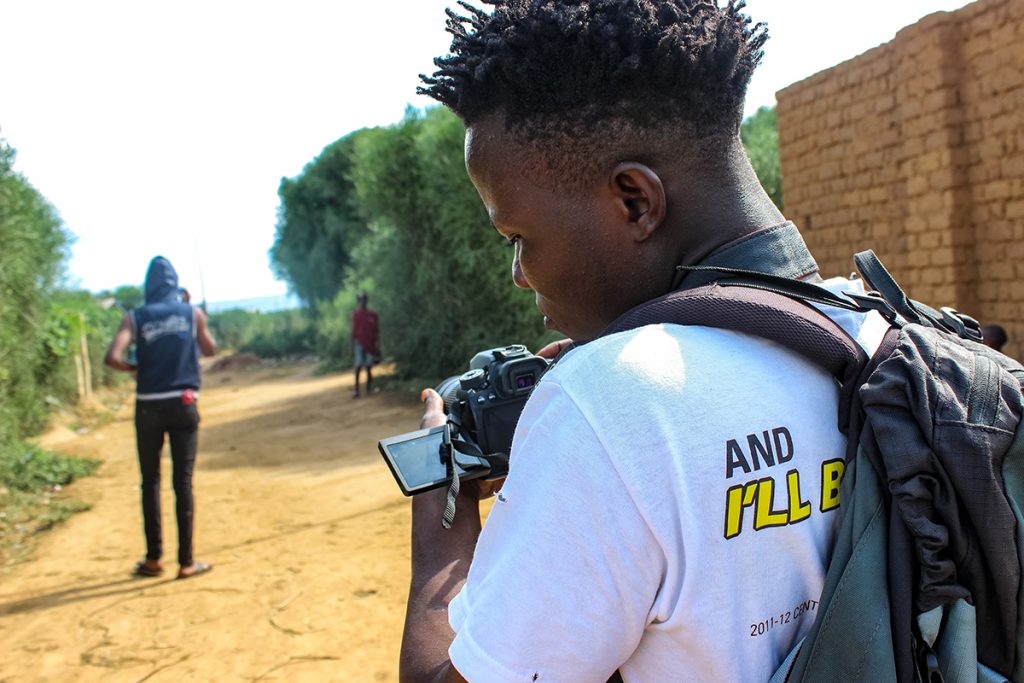 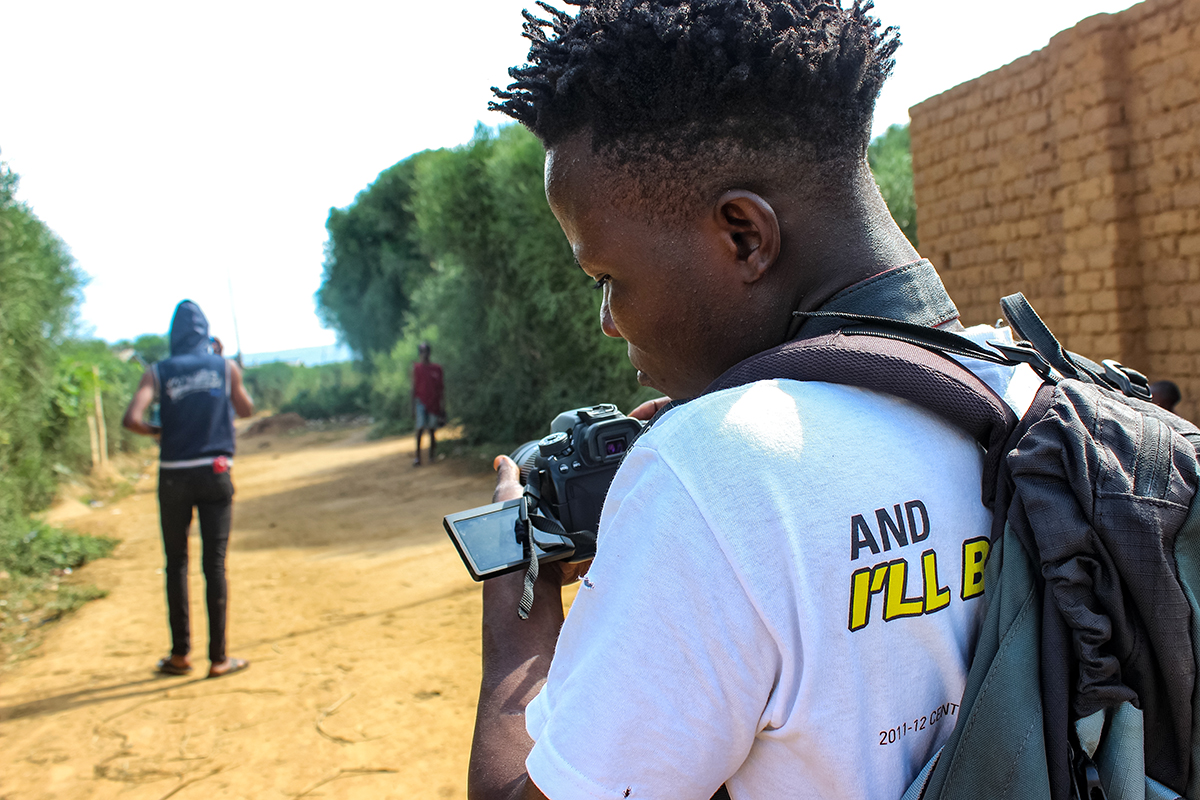 Elie Duvirus Nzabanita records two young Congolese actors for a short film. Nzabanita became a member of Opportunigee in 2016 when he arrived in Uganda from DRC. The 23-year-old filmmaker says he wants to give young refugees like himself the chance to document their experiences. He works for a local production company called Tucheke Movie Production. 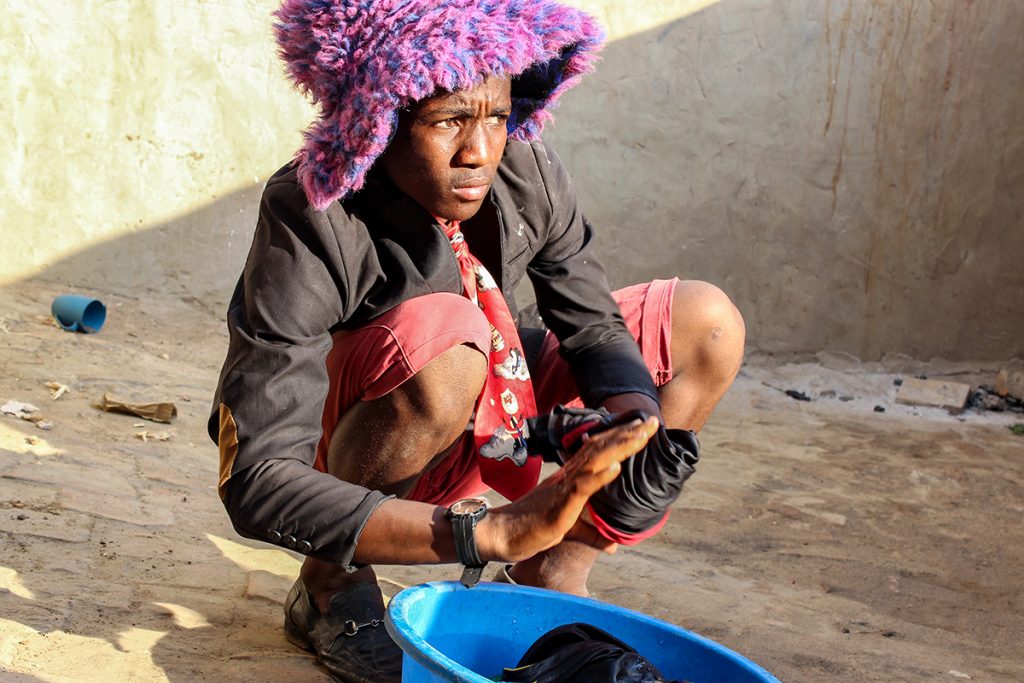 Husein Bambembe, a Congolese refugee, acts out a scene in Elie Duvirus Nzabanita’s short film. The film is about a single father who has to provide for his 6-year-old after his girlfriend leaves him because of his substance abuse. Nzabanita says substance abuse is not uncommon among young adults in the refugee settlement camp. 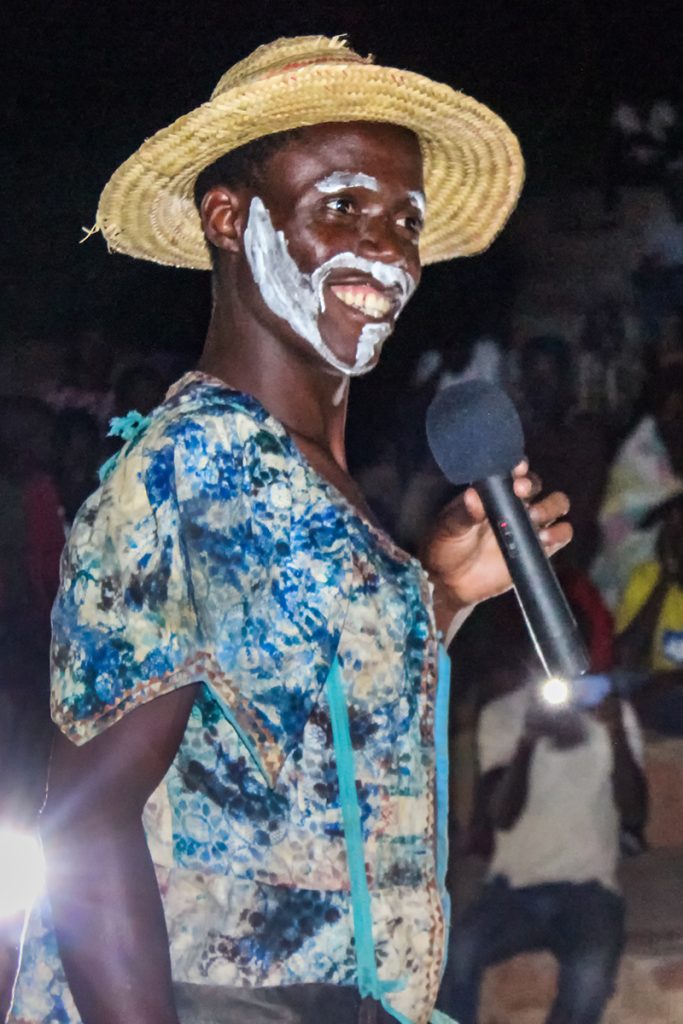 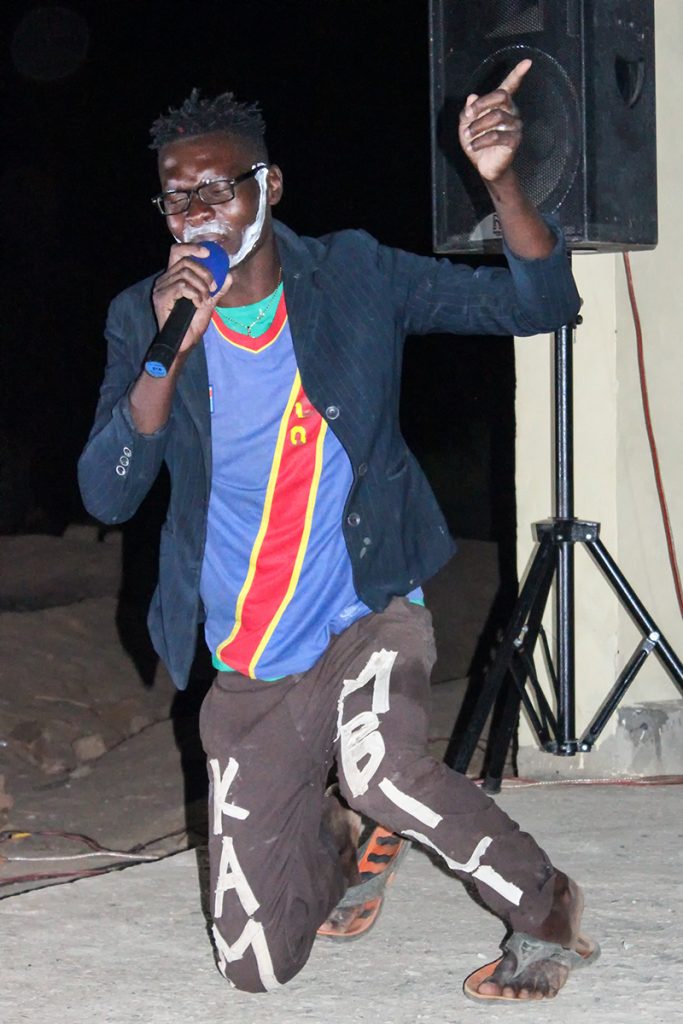 Tonny Lwango, who goes by the stage name Tonny, performs in a skit about safe sex. Lwango, seen here in a straw hat, belongs to Vichekesho, a comedy troupe created by members of Opportunigee. The troupe performs twice a month for young people living in Nakivale. Bienvenue Kandombindo, another a member of Vichekesho, performs alongside Lwango. Vichekesho’s plays provide comic relief to young refugees, while educating them about issues that young people in the settlement face, Kandombindo says. 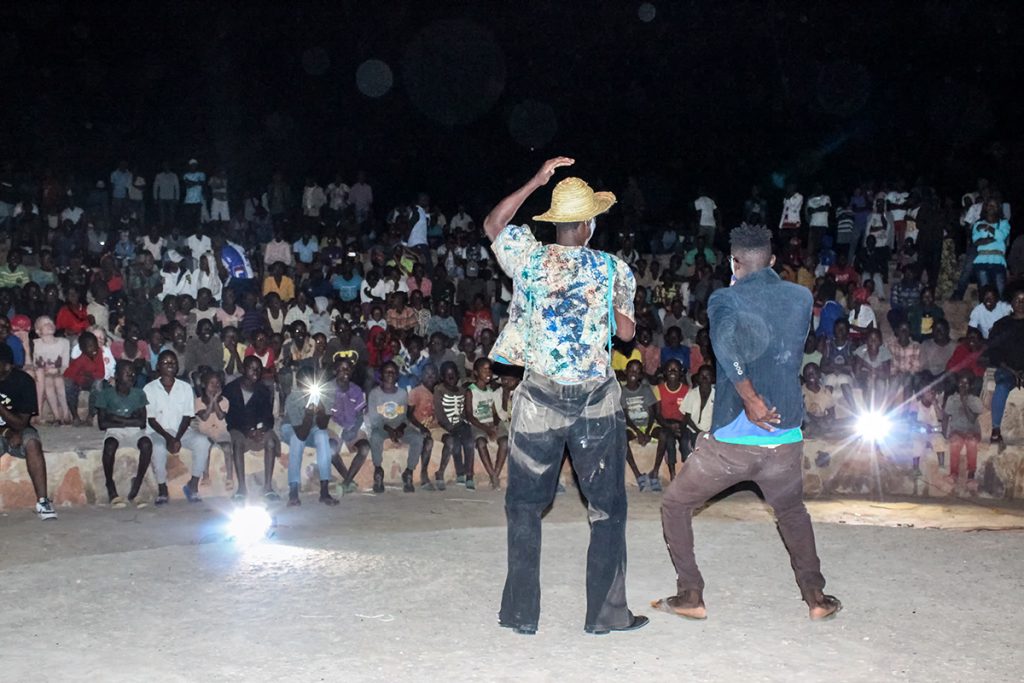 Vichekesho actors take a final bow after their performance.

Patricia Lindrio, GPJ, translated some interviews to English from Kirundi and French.