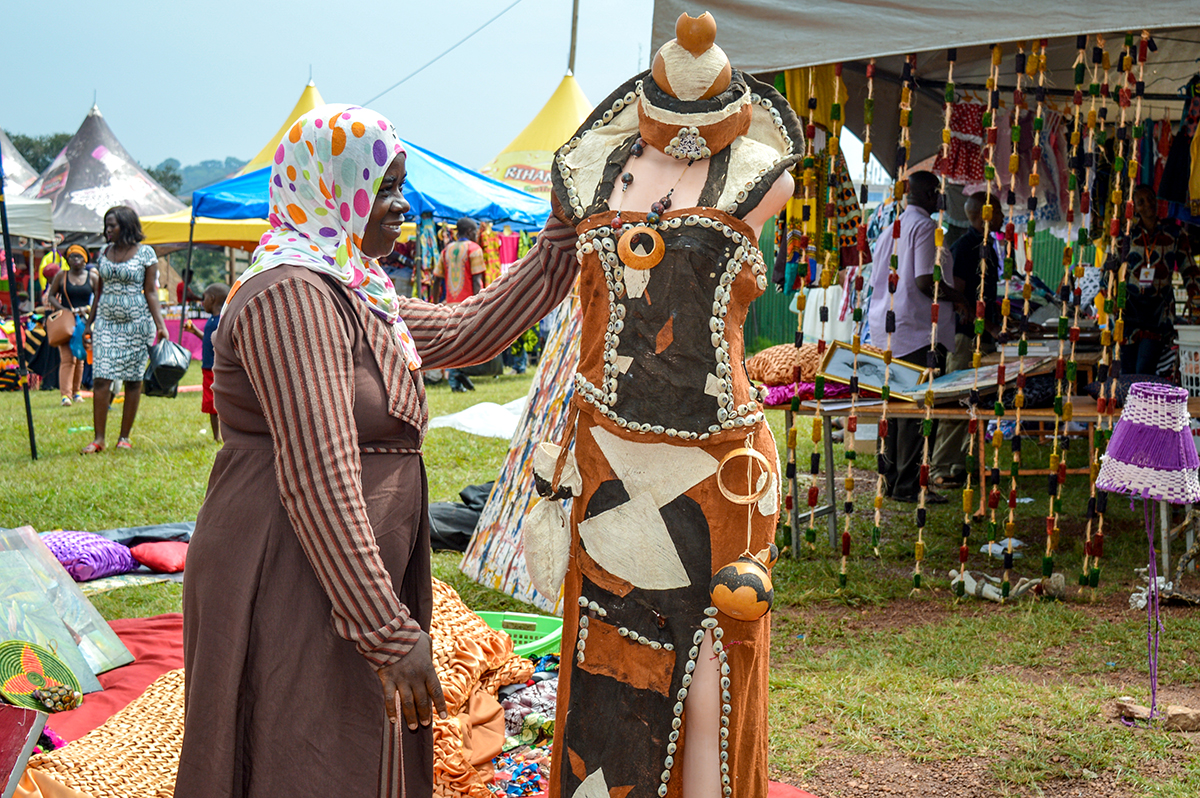 KALISIZO, UGANDA — “I can’t give him what he wants,” Faizal Ssewajje says as he hangs up the phone with a frown.

Ssewajje sells bark cloth from his home in Kyengeza, a village in southern Uganda where the traditional, brown fabric made from Mutuba tree bark is commonly produced. He had promised one of his regular customers in Kampala, Uganda’s capital, a next-day delivery of 50 pieces of bark cloth, each 2 meters (79 inches) in width and length, but he only has 30 in stock.

Since 2016, Ssewajje says he has failed to complete several customer orders because there are only a few bark-cloth manufacturers and even fewer Mutuba trees in his village.

“It’s frustrating when you know you will not get as much money as you need because you can’t deliver the product,” Ssewajje says. 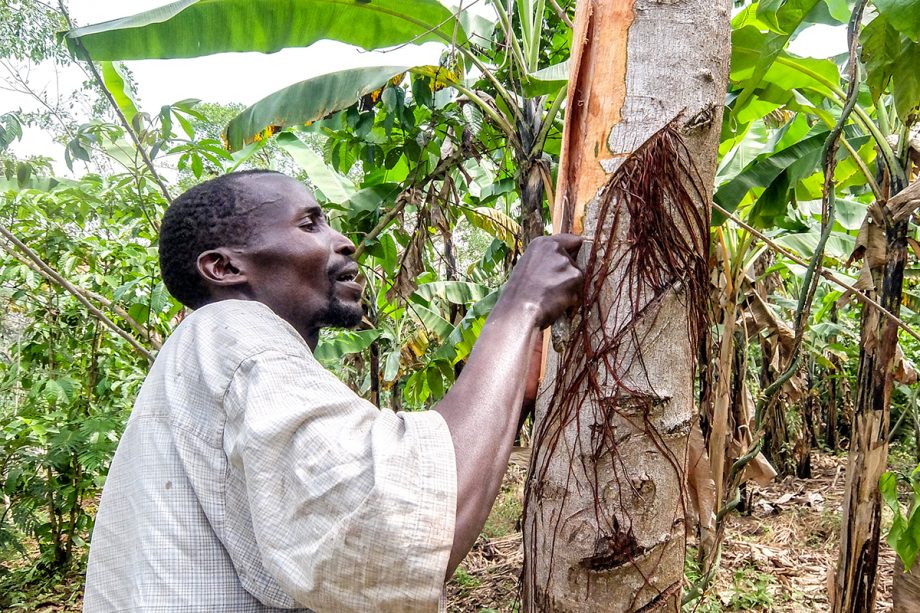 Musoke Bakumpetuddeka, a bark-cloth maker in Kyengeza, a village in southern Uganda, shows how he carves the outer layer of bark from the trunk of the Mutuba tree. He says there are a limited number of people who have the skills to transform the bark into the ancient, traditional cloth locally known as olubugo.

Uganda’s forests are a source of employment for many. Bark cloth traders say that even though there is a high demand among Ugandans, the shortage of Mutuba trees, which are often cut and not replanted, threaten their livelihoods.

Bark cloth, known locally as olubugo, is native to the central and southern districts of Uganda, where the Mutuba tree grows and the cloth has strong cultural value. Bark cloth is now used to make clothing, accessories and home décor.

Originally, it was used in traditional worship and burial ceremonies. Before burial, bodies were wrapped in bark cloth to stop termites from eating them, says Faridah Kyambadde, a Kampala-based tailor who uses the cloth to make dresses and household items such as placemats.

Bark cloth was also used to make clothing for chiefs of former kingdoms and clans including the Ngonge clan, indigenous to central Uganda, says Musoke Bakumpetuddeka, a bark-cloth manufacturer in Kyengeza and member of the clan. 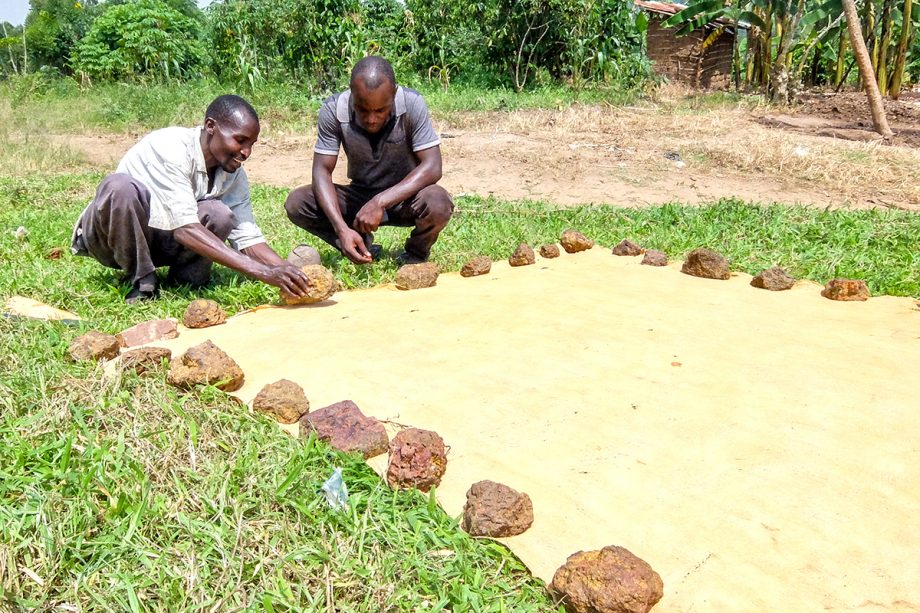 Musoke Bakumpetuddeka (left) shows Faizal Ssewajje how he dries his finished product, bark cloth, in his backyard in Kyengeza, Uganda.

Despite its importance in local communities, bark cloth became less popular during colonial times when missionaries attempted to shift cultural practices, Bakumpetuddeka says. Some locals began to associate the ancient cloth with evil spirits because it was used in traditional burial ceremonies, he says.

“That left only a few of us who perceived bark cloth differently, and got interested in continuing to make it,” he says.

The process of making the ancient cloth is a lengthy one that requires patience, Bakumpetuddeka says. First, manufacturers must carve out several large pieces of the Mutuba tree bark. Usually, the tree must be at least 8 years old to be fit for production of the cloth, Bakumpetuddeka says. But if the tree is older than 70, some cut the entire tree down, he says. 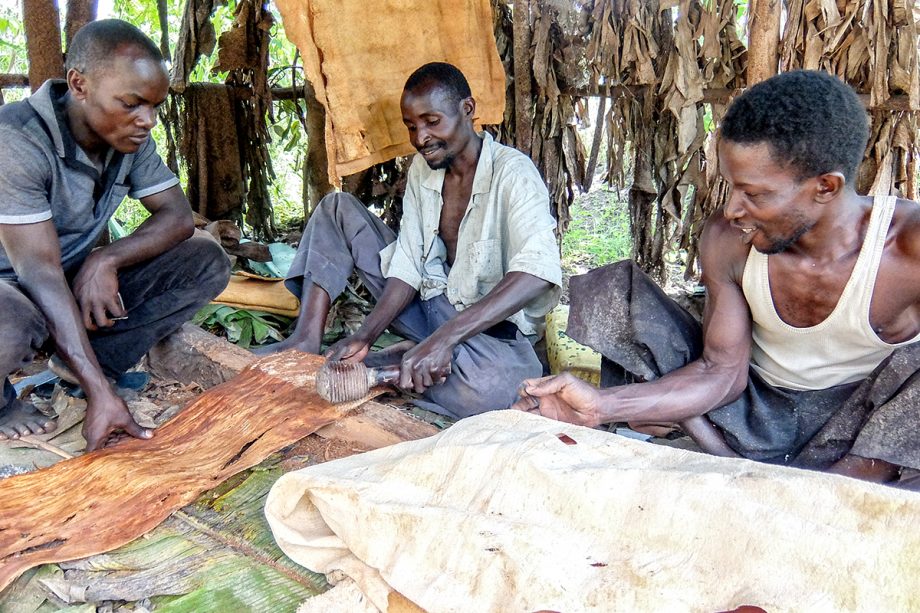 Once pieces of the bark have been carved out, bark-cloth makers beat it with wooden mallets to create a soft, malleable texture. The beaten bark is then placed in a shed to dry. The entire process can take up to 10 hours, Bakumpetuddeka says.

But some bark-cloth makers say the scarcity of Mutuba trees stops them from getting this job done.

“Mutuba trees are cut every day without being replanted; it’s a huge problem,” Ssewajje says.

Moses Matata, public-relations manager at the National Forestry Authority, says deforestation in Uganda is an increasing challenge, and it is difficult to provide estimates specific to the Mutuba tree. 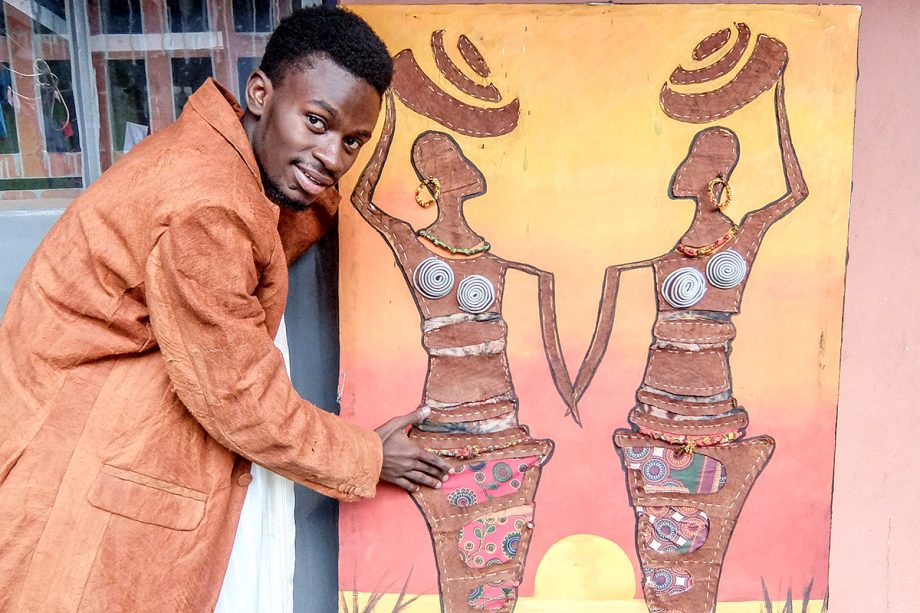 Zziwas Sulayima, a local artist, shows off one of his pieces using bark cloth. Artists and traders in Uganda use bark cloth to make items like bags, dresses, belts, coats and more.

Bakumpetuddeka says that because there are few trees in his village, some bark-cloth makers wait for nearly a year for carved trees to regrow bark, while others resort to finding trees elsewhere. Often, Mutuba trees are found on privately owned land in rural areas, so bark cloth makers pay landowners a one-time fee of up to 800,000 Ugandan shillings ($220), to carve out pieces of bark for cloth production, he says.

Sometimes, the tree is not old enough to be used at the time of payment, so landowners promise the cloth-maker to reserve the tree for only his or her use, he says.

Bakumpetuddeka says he has been paying private land owners to carve out bark pieces from trees on their property for nearly seven months. If he stops, his business will fold, he says. 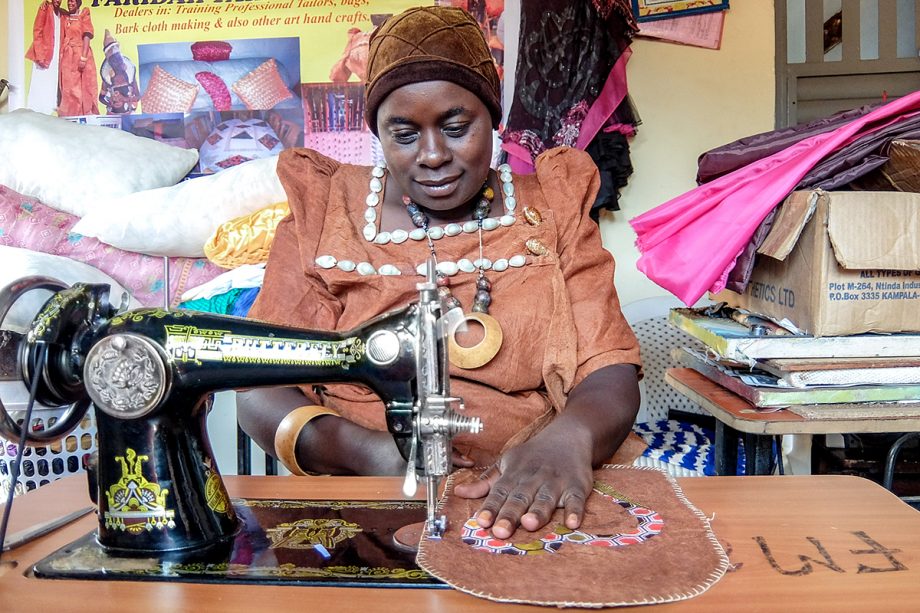 Faridah Kyambadde, a tailor who uses bark cloth to make clothing items, works on a client's orders while wearing a gomesi, a traditional dress made of traditional cloth.

Kyambadde says she struggles to get the cloth from makers. She says she is constantly looking for high-quality bark cloth, which is very soft and easy to use in sewing, but does not always find it. Despite challenges, she says she remains in the business because her bark cloth products are unique.

“Sometimes, I get orders from my clients and we agree on the price. But then it becomes hard to get the right type of bark cloth material for that particular item, and if you try hard and find it, you get it at a high price so you end up making a loss because you can’t go to the client and change costs you had agreed upon,” she says.

Others have incurred losses. Courtney Namusoke, who buys the cloth from makers and sells it to people who use it in burials, says she loses up to 60,000 shillings ($16.55) a day because she cannot meet customer demand.

However, Namusoke continues to sell bark cloth because she says there is potential to expand her business and revive the craft of making the cloth. In 2016, she planted Mutuba trees on the 2 acres of land she owns.