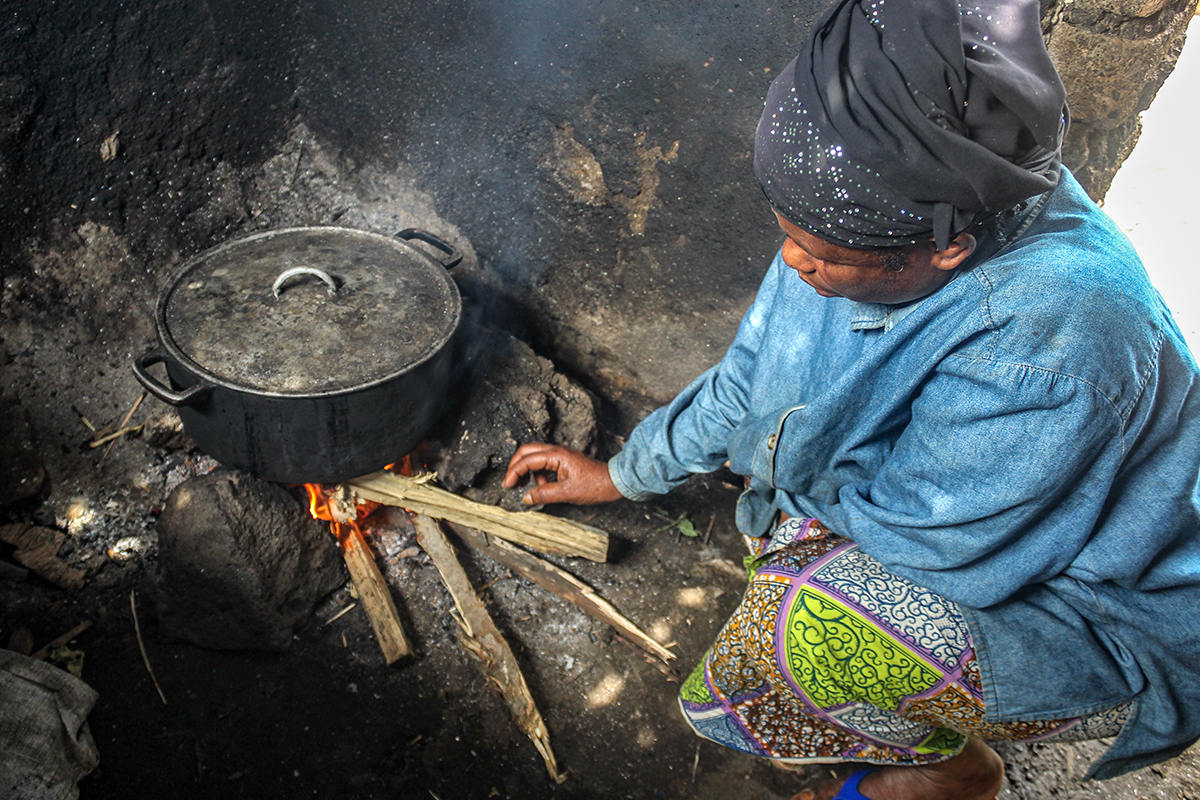 RUGERERO, RWANDA – Before Emérite Nyirandinkabandi prepares dinner at her home in Rugerero, a sector in the northwestern Rubavu district, she sends the third of her seven children out to gather firewood. The 17-year-old returns with a handful of small branches, just enough to cook the sweet potatoes that Nyirandinkabandi has washed and placed in a large steel pan stained with soot.

“We can’t eat unless my kids spend hours in the fields, collecting small branches that have fallen off trees or climbing trees in search of dried branches,” says the 48-year-old mother as she prepares their only meal for the day.

On days when she is unable to cook, Nyirandinkabandi says she buys a ladle of beans worth 100 Rwandan francs (12 cents) and saves some for the following day.

Firewood and charcoal, common sources of energy in Rwanda, have become hard to find in some communities and expensive to buy in others. Prices for wood fuels have increased, as the government promotes the use of eco-friendly sources of energy. Officials say that those who can no longer afford wood fuels have alternatives available for, such as liquefied petroleum gas cylinders and biomass stoves manufactured by Inyenyeri. 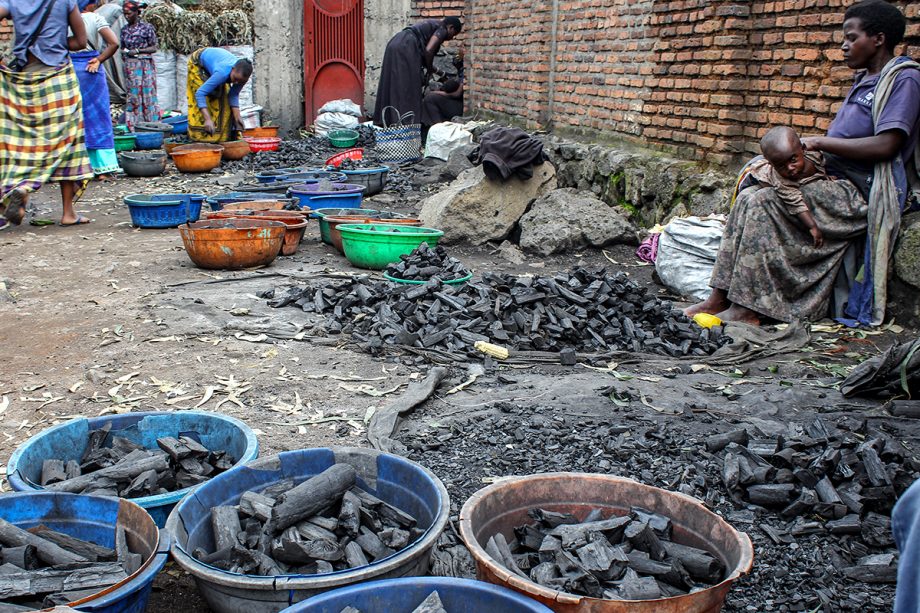 Locals buy and sell sacks of charcoal at a market along the Rwanda-DRC border. One sack of charcoal costs 13,000 francs ($15).

Biomass, a term that refers to organic matter used to generate energy, dominates Rwanda’s energy sector, accounting for 86 percent of total energy used, according to a 2014 report published in the International Journal of Renewable Energy Development. After wood fuels, agricultural residue and peat are the most common types of biomass in the country. The production and sale of biomass is a source of livelihood for many. But officials and local experts warn against its effect on the environment.

Rwanda’s forests are disappearing. Between 1960 and 2007, about 64 percent of the country’s forest coverage area was lost, according to the 2015 Rwanda State of Environment and Outlook Report. The high demand for food, herbal medicines, firewood, charcoal and timber, often used to make commercial products, is driving deforestation.

But the government has a goal to increase national forest cover to 30 percent by 2020. As part of its efforts, a carbon-friendly energy policy was introduced in 2010, and reforestation activities are ongoing in some rural communities. Cutting down trees without a permit is also punishable by up to two years in prison, a fine of up to 2 million francs ($2,344) or both.

Shifting to methods of cooking that do not rely on excessive use of firewood and charcoal is a key part of the policy. But some prefer to stick with wood fuels, however costly. In markets, a sack of charcoal often goes for 13,000 francs ($15), a 4,000-franc ($5) increase since 2015.

Prices for charcoal are climbing because the government has stepped up efforts to end illegal tree-cutting, says Samuel Nshimiyimana, a charcoal vendor. It is becoming difficult for those who once cut down trees without permits to do so without getting caught by local authorities, he explains. 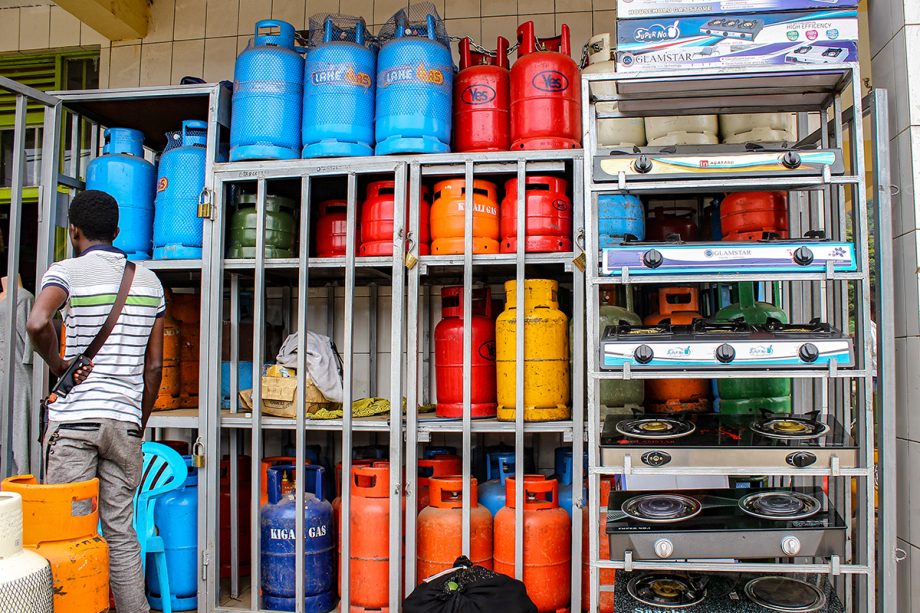 Gas cylinders, sold in many parts of the Gisenyi sector, are a source of energy for some.

Nyirandinkabandi, who works odd jobs to take care of her family, says she cannot afford to buy either a sack of charcoal or a 13-kilogram (28.7-pound) cylinder of gas, sold for 15,000 francs ($18). She is forced to collect firewood anywhere she and her children can find it. But firewood on private property is out of bounds, she says.

“At times, our kids return home empty-handed when owners of fields don’t take very kindly to them and chase them,” she says. “For firewood is needed in their homes as well.”

Others use gas cylinders but say they’re expensive, too. Margueritte Mukasine, who buys cylinders twice a month, says they do not contain enough gas to cook three meals a day for a month.

“To ensure I don’t run out of cooking fuel before a month ends, I must have this 13-kilogram gas cylinder and half a bag of charcoals,” she says. “For food products that take long to cook, such as beans and isombe [a local stew of cassava leaves and peanut paste], I use a charcoal stove. I use gas for quick cooking.”

Some say it is cheaper to use stoves that run on small amounts of biomass. In partnership with the government, Inyenyeri, a renewable-energy company founded by Americans and run by Rwandans, is bringing such stoves to rural parts of the country. The stoves, which are leased to customers, cook meals using biomass pellets made from sawdust or small dried branches and leaves. Stove owners can collect dried branches without having to cut down trees, because branches can be found in their communities, says Tom Price, director of strategic initiatives at the company. Then, they can take them to their local Inyenyeri retailer, where they are transformed into pellets, he says. There are two retailers in Rubavu where users can buy a kilogram of pellets for 200 francs (23 cents) or receive pellets in exchange for the branches and leaves they collect, he adds. 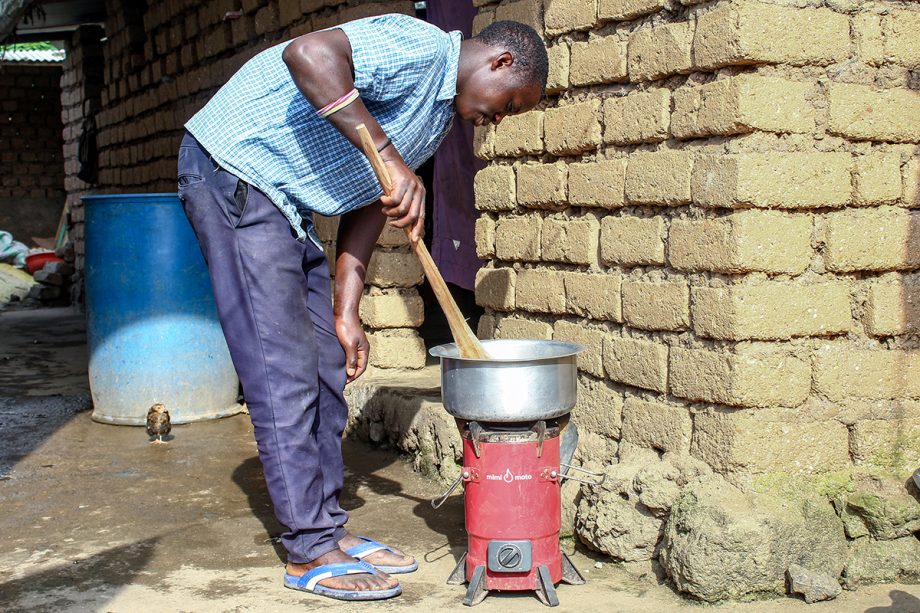 Ndagijimana Kadogo prepares a meal using an Inyenyeri stove outside his home in the Gisenyi sector in Rubavu district.

For years, Jacqueline Muhorakeye cooked with charcoal, but the 44-year-old mother of five recently leased an Inyenyeri stove. Muhorakeye, who has been using the stove for just over a year, says it is cost-effective, clean and easy to use.

“A kilogram (2.2 pounds) that sells for 200 francs burns for half an hour, while charcoal selling for the same price can only be used to boil water and nothing else,” she says. “In addition, it’s smoke-free, and there’s no ash remaining after you’ve cooked your food.”

Price says that more than 2,000 Rwandans have leased stoves since December. Users in Rubavu district’s Gisenyi sector make up half of these users, he adds.

Some say these stoves are one way to help districts increase the use of eco-friendly energy sources among residents, which is a commitment outlined in the carbon-friendly energy policy.

Gilbert Habyarimana, the mayor of Rubavu district, says the local government is working to make clean energy available to people who live in remote areas, as well as to those who do not own land where they can gather firewood. Educating locals about the benefits of using gas and small amounts of biomass for cooking is also important, he says.

“We’re going to carry on raising people’s awareness of environmental protection and continue to work with investors to bring gas prices down and introduce cheaper gas cylinders,” he says.