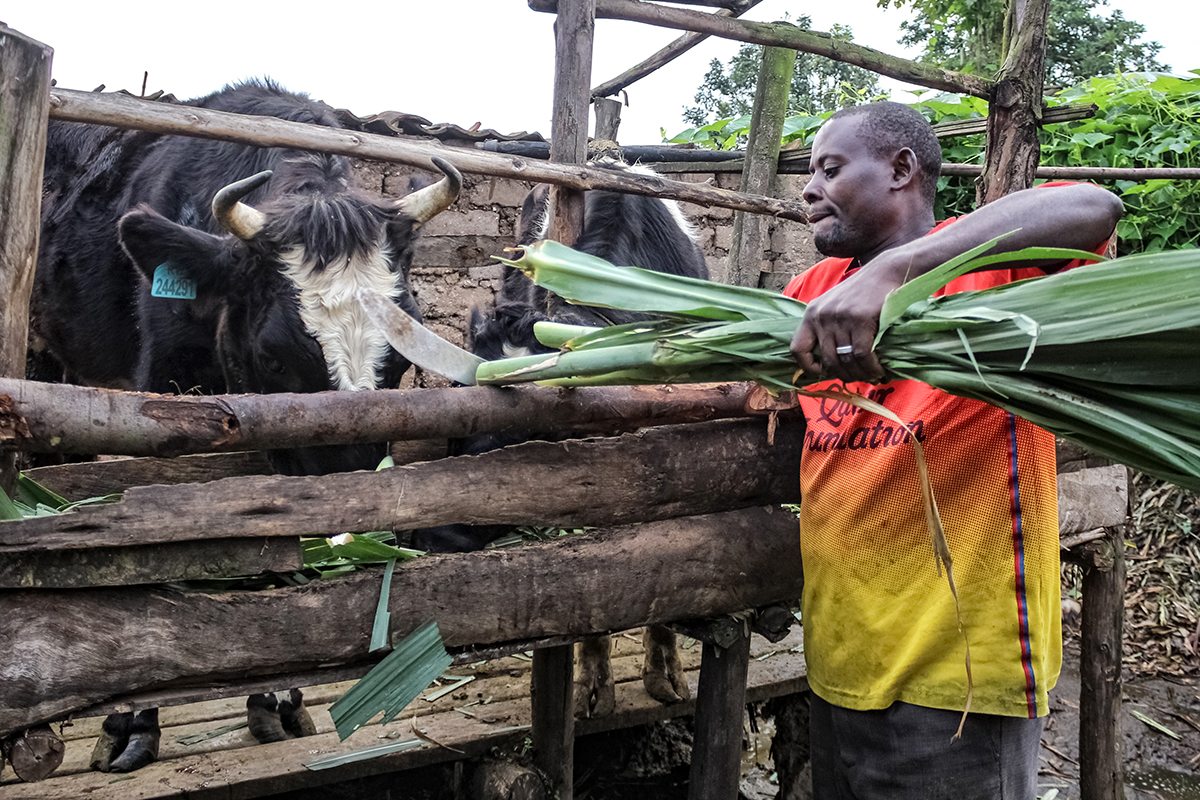 TERIMBERE, RWANDA – Innocent Bwicubugize closely watches a goat tied to a tree in front of his home. He says the goat does not belong to him, but soon he’ll have one of his own. In a month, the goat he’s been raising for his sister will give birth, and she’s promised him that he can keep it.

Many people who live in the Terimbere sector in Rwanda’s western Rutsiro district take care of their families by rearing livestock. For some, cattle are the farm animals of choice, says the father of seven.

In 2013, Bwicubugize tried to raise a cow that he had received through the government’s Girinka program. The program gives poor families across the country one cow per family to help them become self-sufficient.

“When I was given a cow, I thought it’d help me make a living and get everything I want,” he says. But his plans didn’t pan out.

“Everything I had to do to take good care of the cow, cost me money,” he explains. “It wasn’t an easy task for me to collect forage, afford drugs and pay for veterinary services, especially as I couldn’t even afford to put food on the table.”

Unable to raise the cow, he put it up for sale.

Girinka is a Kinyarwanda term which translates to “one cow per poor family.” It’s been more than a decade since the government launched the Girinka program, aimed at helping people in rural parts of the country. There have been some successes, including increased food security among recipients and improved soil fertility from cow manure, officials say. Some people make an income from the cows, too. But some beneficiaries say that raising a cow – an animal that symbolizes wealth in Rwandan culture – is a financial burden too large to bear, even with support from officials.

In Rwanda, where agriculture drives the economy, the cattle population is estimated to be 1.3 million, according to the National Institute of Statistics Rwanda. From June 2006, when the Girinka program began, until November 2016, a total of 259,087 cows were distributed to families across the country, according to government figures. In the Rutsiro district, 8,764 cows were given to residents between June 2006 and June 2016. 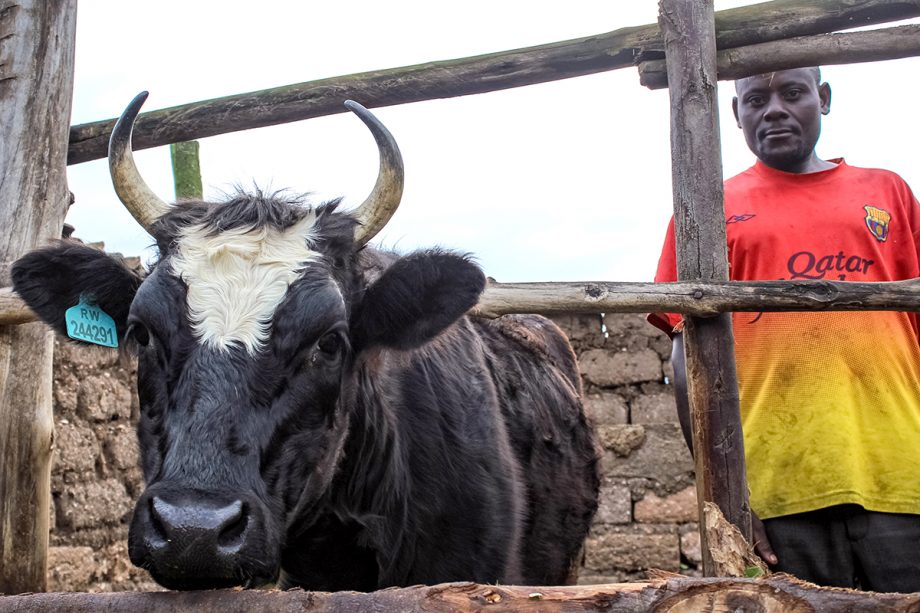 Jean Claude Nshimiyimana, a farmer, says that the high costs of raising large livestock, such as cattle, have not stopped him from taking care of his cow.

A committee, comprised of local-government officials and locals, determines a family’s eligibility for the program based on their socio-economic status, says Moise Abayisenga, a resident of Rukukumbo and member of the village’s Girinka committee. Families that do not have a stable source of income or have never owned a cow are typically selected to be beneficiaries, he says. Depending on where it is bought, a cow in Rwanda can cost anywhere between $324 and $568, which is unaffordable for many people.

Some program beneficiaries say that raising a cow is expensive, but the cows have changed their lives for the better.

Like Bwicubugize, Aimerance Mukagatare, a widowed mother of seven, was given a cow in 2013. She says a cow gives birth for the first time when it’s 1 year old. Taking care of it during the pregnancy is very difficult and time-consuming, she adds.

“I found myself obliged to provide for my family single-handedly. However, I could spend all my time looking for something to feed to the cow and had no time to do other things,” she explains.

Five years on, Mukagatare continues to raise her cow. It costs her between 10,000 and 15,000 Rwandan francs ($12 and $17) per month to feed the cow. In the early years, Mukagatare also hired someone to help her take care of the cow for 20,000 francs ($23) per month. Now, she can no longer afford to pay the helper. Despite the costs involved, she says raising a cow has been worth it.

Another cow owner, Thasien Nteziryayo, says he had a rocky start, too.

“The beginning was the hardest, because I, too, threw lots of money and energy into it,” he says. But Nteziryayo, who received the cow in 2012, says he’s finally been able to break even. “Now that I sell milk today, I can easily afford to buy hay and feed my cow.” His cow produces up to 20 liters a day.

Officials are aware that it can be expensive to raise a cow, so there is support for program recipients, says Elie Habiyambere, animal resource officer for the Rugerero sector, also in the western part of the country.

“We provide close guidance to them for the first three months, train them and put veterinary drugs at their disposal in case of need,” he says.

Abayisenga, of the Rukukumbo Girinka committee, adds that in some cases, support comes in the form of raising other livestock in lieu of a cow.

“Should a beneficiary fail to properly care for his cow in the first six months, the committee takes it back, in exchange for a goat or a pig or a sheep,” he says.

The bulk of Bwicubugize’s financial challenges came after the six-month mark, when he was no longer receiving drugs from the local committee and no longer eligible for smaller livestock, he says. That’s why he sold the cow.

“Eight months later, I found myself more overwhelmed by debts and poverty than before” he had the cow, he says.

First, the cow owners must hand over the first-born calves to their local Girinka committees, and they are not allowed to give away their cows at any point, he says.

Violating these terms has consequences. Habiyambere says that anyone who sells a cow will be subject to a fine equivalent to the price of the cow. Bwicubugize says that he was forced to pay the fine just two days after he had sold the cow and used the money to buy a plot of land. His wife stepped in to assist him with the repayment.

“My wife was forced to sell the land she had inherited from her parents,” he explains. “She used the proceeds of the sale and the little money I was left with [after buying the land] to pay for the cow.”