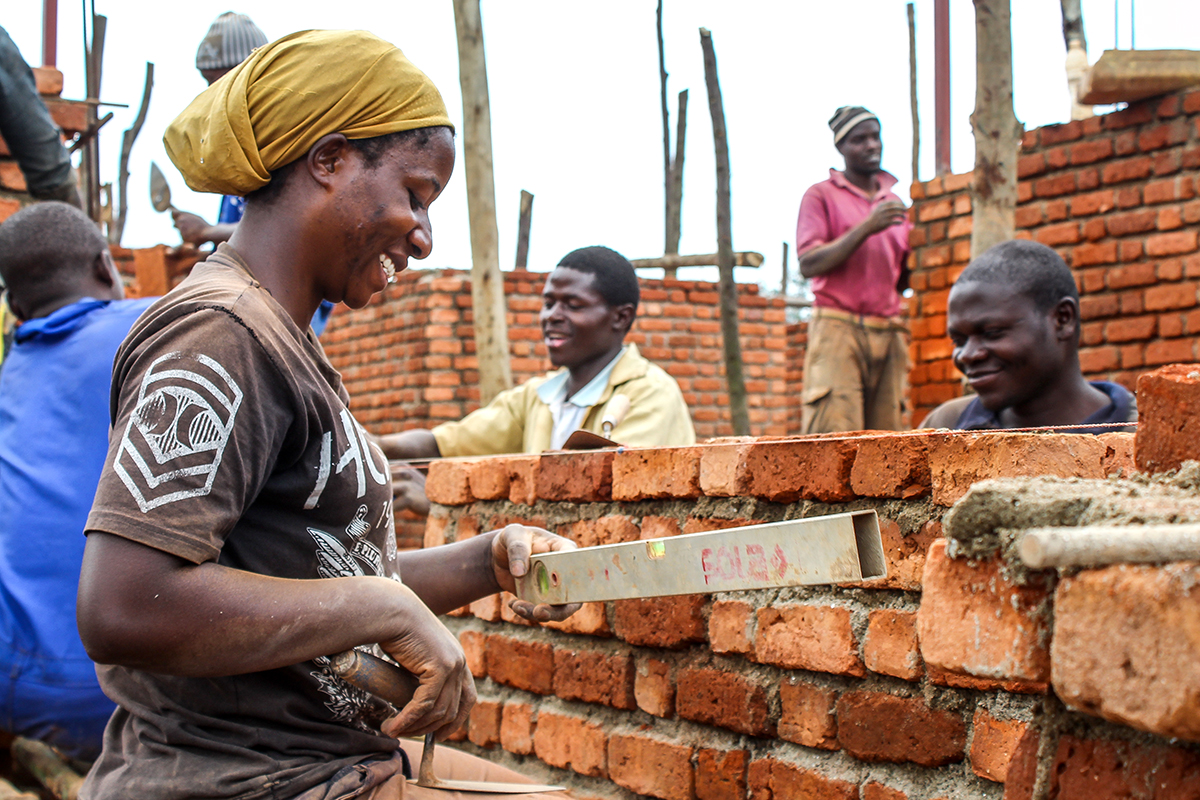 RUGERERO, RWANDA – Vestine Mukahigiro woke up at 10 p.m. and rushed to her 4-year-old son’s side as he gasped for air and his chest muscles tightened. It was another asthma attack.

Mukahigiro picked up her son, placed him on her back and began the 5-kilometer (3-mile) walk from her home in a rural area of Rugerero, a sector in Rwanda’s western Rubavu district, to the closest health center in the neighboring Gisenyi sector, a larger urban area. Mukahigiro walked as fast as she could, she says. As she approached the highway leading to the health center, she hoped to catch a ride, but no cars passed by.

“All I could do was pray to God so that we would get to the hospital before it got too late,” she says.

Residents of Rugerero have to travel long distances for health-care services because there is no health center in the sector. They often go to neighboring sectors like Gisenyi, Nyundo and Murara. Walking to any one of these sectors takes at least an hour.  But with the construction of the sector’s first health center underway, some say they will no longer have to make long, tiring trips when they are ill, while those working at the construction site face looming job insecurity.

Rwanda’s four provinces are divided into 30 districts and 416 sectors. As of 2015, the national health system consists of a network of referral hospitals, district hospitals, health centers, health posts and other health facilities, according to the government’s Health Sector Policy. Of the 60 health posts in the country, one is located in the Rugerero sector. 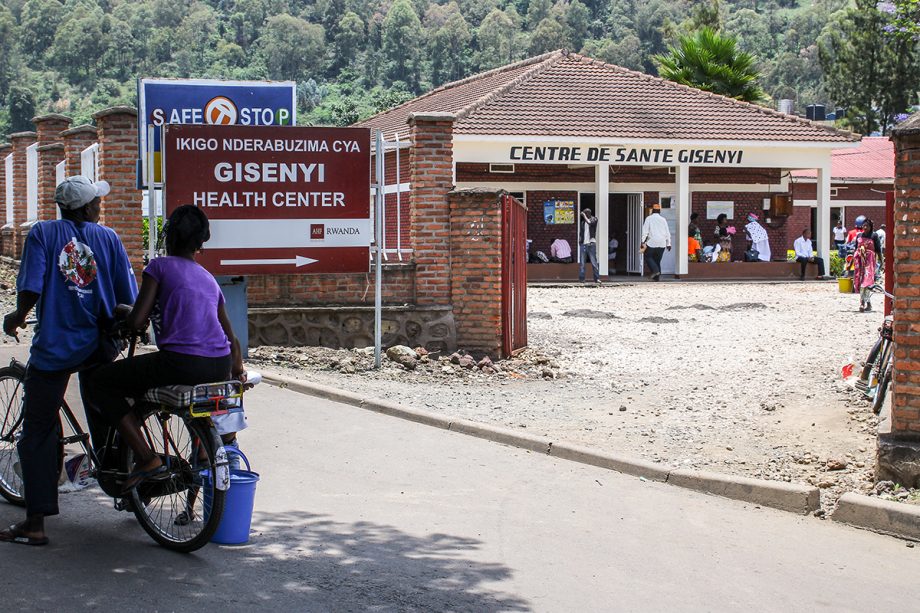 For some who live in the Rugerero sector, this health center in the neighboring Gisenyi sector is the closest and at times the only option to receive medical attention. Some residents walk for hours to get here.

A health post offers limited medical attention, serving as a vaccination dispensary and providing emergency services to small villages across the country. But even with a health post, some say health-care services are still out of reach in the Rugerero sector. The health post here has a two-member staff and is open from 7 a.m. to 6 p.m. With nearly 42,580 people living in the sector, according to the most recent national census in 2012, some say patients are often referred to health centers when they are ill because of a shortage of staff at the health post.

When complete in February 2018, the Rugerero Health Center, funded by the local government and Health Builders, a nonprofit organization that works with local governments to improve health-care systems in Rwanda, will serve the sector population and will be open for 24 hours. There will be 21 employees at the new health center. For some, a larger staff means improved access to quality health care.

But for construction workers, a new health center comes with advantages and drawbacks. Since the construction of the health center started in May, a total of 125 residents are working as lead and assistant masons at the site – 70 percent of them are women. Each mason earns between 3,500 Rwandan francs ($4) and 1,500 francs (less than $2) a day, depending on his or her seniority. With these wages, workers say they can provide two to three meals for their families, which range from two to five members.

For some of the women working at the construction site, supporting their families was impossible, because they did not have jobs, says Vincent Muhigirwa, who supervises the masons. Others would walk to different parts of the Rubavu District or take taxis to towns along the country’s western border to find household work, such as washing clothes, he says. These jobs paid very little.

Employment prospects among women in Rwanda are in part constrained by the domestic roles they may have in their families and society. The unemployment rate among women aged 15-64 was 85 percent from 2010 to 2011, according to the African Development Bank. The rate of unemployment was significantly higher in rural areas than in urban areas.

Gérardine Gatoto, a mother of three, works as a lead mason at the health-center construction site. She sold fruits before she started working there in May, but she says she didn’t make very many sales because she spent too much time traveling to and from towns along the western border, sometimes crossing over into the Democratic Republic of Congo, where most of her customers live.

“It’s like manna from heaven, and we’re sort of killing two birds with one stone, having access to health-care services and being able to get a job as construction-site workers,” Gatoto says. 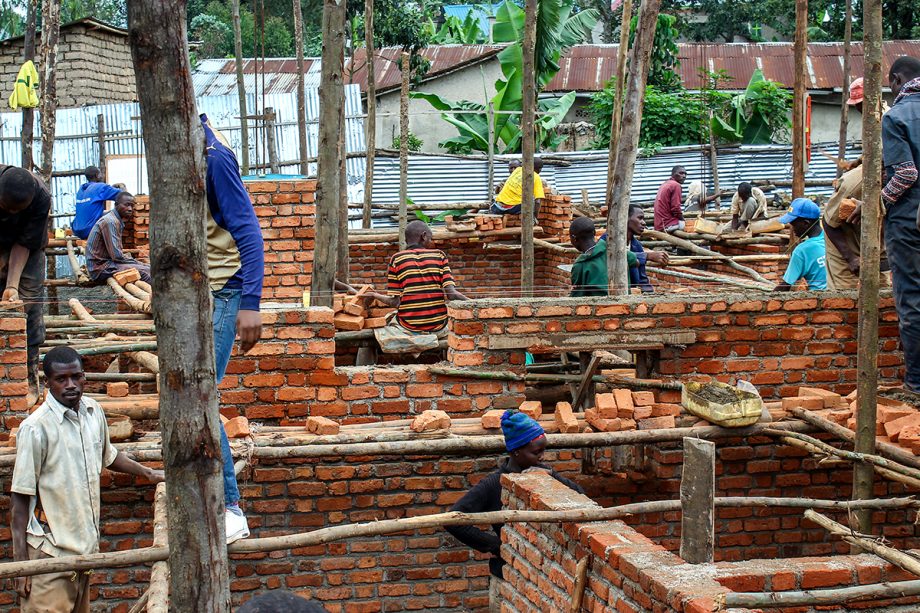 But Gatoto may have to go back to selling fruits, once the health center has been completed. Her supervisor Muhigirwa says that the director of the health center will have to decide after the facility is completed whether the masons will have a job and in what capacity.

Still, Gatoto says she is grateful and proud that she has been able to support her family with the job. She says she hopes to find another masonry job, if she is let go.

For Mukahigiro, whose son is asthmatic, a completed health center close to her home will ensure that her son receives timely medical attention. She had considered moving closer to the hospital in the Gisenyi sector but could not afford to pay rent for a house there, she says.

Local government officials are also looking forward to the new health center. Having a health center will help to reduce maternal mortality, says Jeannette Uwajeneza, the executive secretary of Rugerero sector. Rwanda’s maternal mortality rate in 2015 was 210 per 100,000 live births. While the rate has decreased from 750 deaths per 100,000 live births in 2005, maternal mortality is still a challenge in the East African country. Uwajeneza says more mothers die in childbirth in rural areas than in urban areas in Rwanda because of inadequate facilities and limited accessibility to health care.

Marie Mukagasana, who lives in Kibaya, a village in the Rugerero sector, says she often has to escort ailing patients and pregnant women from her village to the health center in the Gisenyi sector.

When a woman goes into labor in the middle of the night, Mukagasana says she calls the only ambulance that serves the Gisenyi sector. While she waits for the ambulance, neighbors help her place the pregnant woman on an ingobyi, a traditional basket-shaped stretcher that is commonly used in Rwanda, she says. They begin to walk to the health center with the stretcher, hoping to meet the ambulance on the way, because it usually takes time for it to arrive, she says. With a health center close by, women in labor will no longer be at risk of dying in childbirth because they could not make it to a health center in time, Mukagasana says.

Access to health care remains a priority for the Rubavu District government, Uwajeneza says. According to its five-year development plan published in 2013, the government plans to rehabilitate existing health facilities and construct more across the district, to bring health care closer to remote communities.