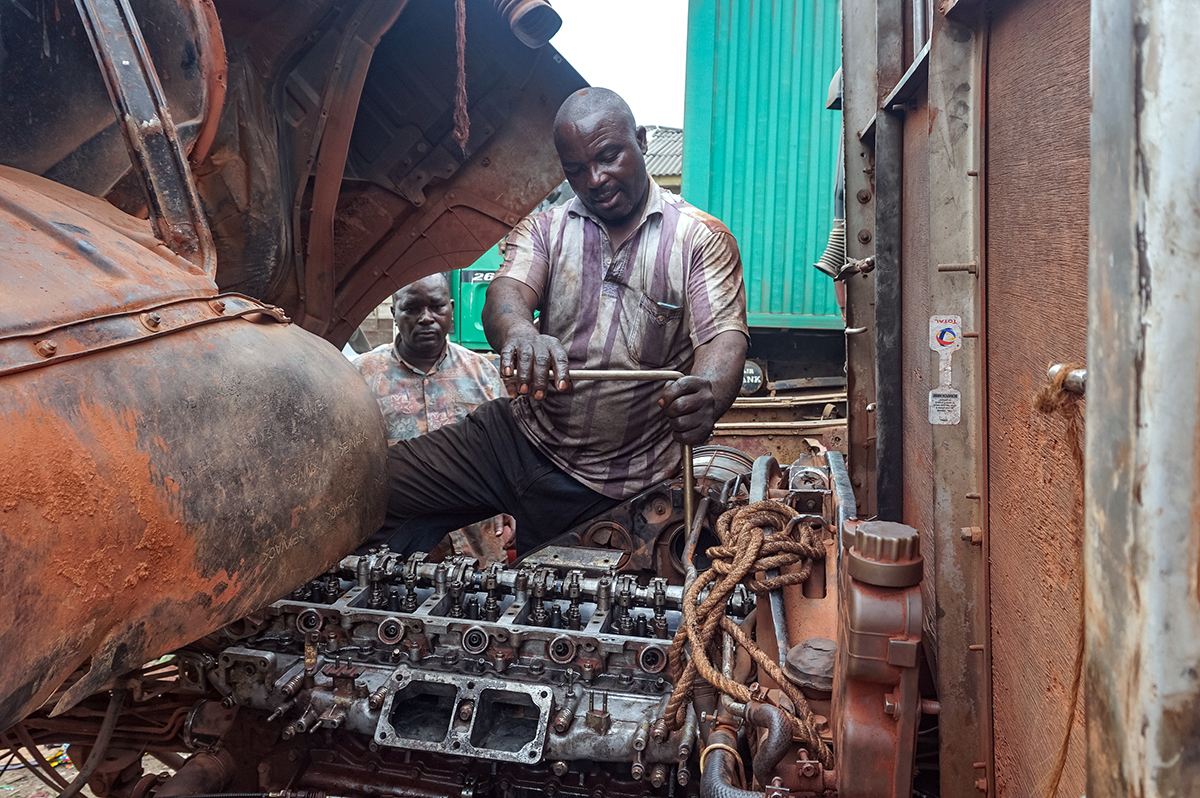 KISANGANI, TSHOPO PROVINCE, DEMOCRATIC REPUBLIC OF CONGO — Whenever truck driver Bernard Ekoya’s vehicle breaks down, he fixes it himself. He never takes it in for an official routine inspection.

Ekoya, 55, says taking vehicles in for official checks in Kisangani is extremely costly. One day, after his truck – a Mercedes Actros – broke down, he says he was asked to pay 162,942 Congolese francs (about $100) to get it inspected.

“They told me that my vehicle was having braking problems and another mechanical breakdown,” Ekoya says. “Later, they advised me to see a maintenance technician. I ended up realizing this institution charges too much money for nothing.”

“I won’t waste any more time and money taking my vehicle in for inspection,” he says.

Ekoya is not alone. He’s one of many self-taught vehicle technicians to be found throughout Kisangani, most of whom eschew official inspections.

“I’ve never trained as a mechanic,” he says. “However, I once served as a truck driver’s assistant, and had to follow with attention each time our vehicle was being repaired. Today, I’m a great driver-technician.”

In 2014, the provincial minister of transport began encouraging people to take their vehicles in for inspection, free of charge, in an attempt to keep the country’s cars and trucks in better shape and curb carnage on roads.

Not long afterward, the Société Congolaise de Contrôle Technique, or SCCT, a company that conducts vehicle inspections in partnership with the government, set up shop in Kisangani, the capital of DRC’s Tshopo province.

“I heard the message from the minister, but I hadn’t my own vehicle,” Ekoya says. “Later, I bought one, and took it in for inspection. As the awareness period had come to an end, I was obliged to pay the $100.”

The SCCT says it has brought experienced technicians and high-quality equipment to Kisangani, but the Boyomese, the name used to refer to people who live in the city, are a long way from making a habit of taking their vehicles in for routine screening.

Instead, many take their vehicles in for repairs only when they experience mechanical failures. The lack of business has the company threatening to close down and leave the city entirely.

“We’re operational, but our technicians and our machines are idle,” says Jacques Agbanya, the legal assistant to the managing director of SCCT. “I don’t see the point of staying here – it would be better to go back to Kinshasa.”

I won’t waste any more time and money taking my vehicle in for inspection.Bernard Ekoya

Meanwhile, streets in the city teem with vehicles in poor running condition, contributing to some accidents. And not a single day goes by without hearing of a road accident occurring somewhere in the city.

Only 7% of vehicles in the city are taken for inspection, says Jean Kukembisa, a SCCT provincial officer in charge of vehicle inspection.

For many, the cost is prohibitive.

“Of course, I’m aware that there’s a vehicle inspection facility in the city, but I’m not interested in taking my car in for inspection, because with the impoverished circumstances we live in today, affording to pay $62.50 twice a year is no easy fit,” says Daniel Kiyombo, a city dweller and car owner.

Other drivers say the government is not doing enough to encourage inspections.

“Each vehicle driver must carry with them their vehicle identification card and driver’s license issued by other government authorities. And because of that, many motorists aren’t thinking about mechanical inspection – that’s the furthest things from their minds. They continue to drive on roads in Kisangani as if there’s nothing amiss,” says 25-year-old Israel Ediba, a driver.

“When I’m driving my vehicle, and traffic cops wave me down, they only ask me for the documents on board, namely my vehicle identification card and driver’s license, and nothing in what they ask even hints at vehicle inspection,” he says. “May I fault myself for this?”

But officials say these excuses aren’t good enough, and they put the public in danger.

“The Boyomese should get in the habit of having their vehicles tested for roadworthiness to avoid traffic accidents which kill people on the city’s roads every day,” Agbanya says.

“The provincial government, especially the transport ministry, should thus assume its responsibilities, and expand efforts and strategies to raise awareness among locals.”