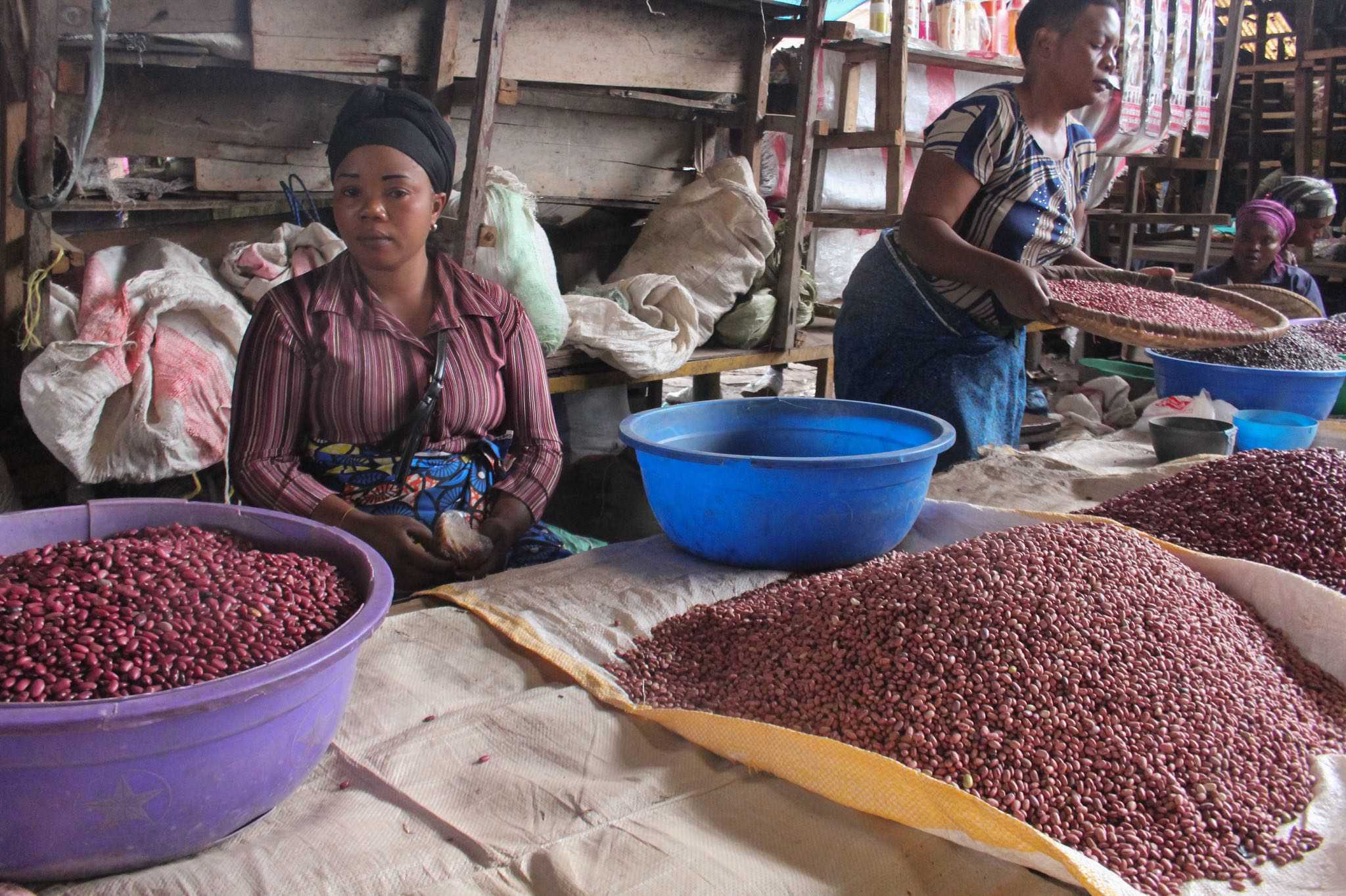 GOMA, DEMOCRATIC REPUBLIC OF CONGO — On normal days, the central market of Virunga in the city of Goma is bustling and lively. A labyrinth of tarpaulin-covered stalls — filled with smoked, salted fish; mounds of freshly harvested vegetables; poultry and meat — the market offers a sensory experience of sights and aromas. But today, empty stalls here aren’t unusual, and the prices, consumers say, are anything but affordable.

Following escalated fighting with the Forces Armées de la République Démocratique du Congo (FARDC) — the Congolese national army — the M23 armed group has captured multiple strategic cities and towns in the province of North Kivu, drawing close to Goma, the capital. While Goma has not yet been occupied, the direct road between Goma and Rutshuru territory, the agricultural heart of North Kivu, and the Bunagana border, a transit point for cross-border trade between DRC and Uganda, have been cut off.

Produce is rotting in Rutshuru’s fields as farmers — like the rest of the population — move to safer areas. But Goma, dependent on this produce, is grappling with a severe food crisis. As the prices of staple foods increase, along with poor harvests and rising fuel prices, the city of more than 700,000 people, which has recently become a refuge for many more displaced, now faces growing food insecurity. 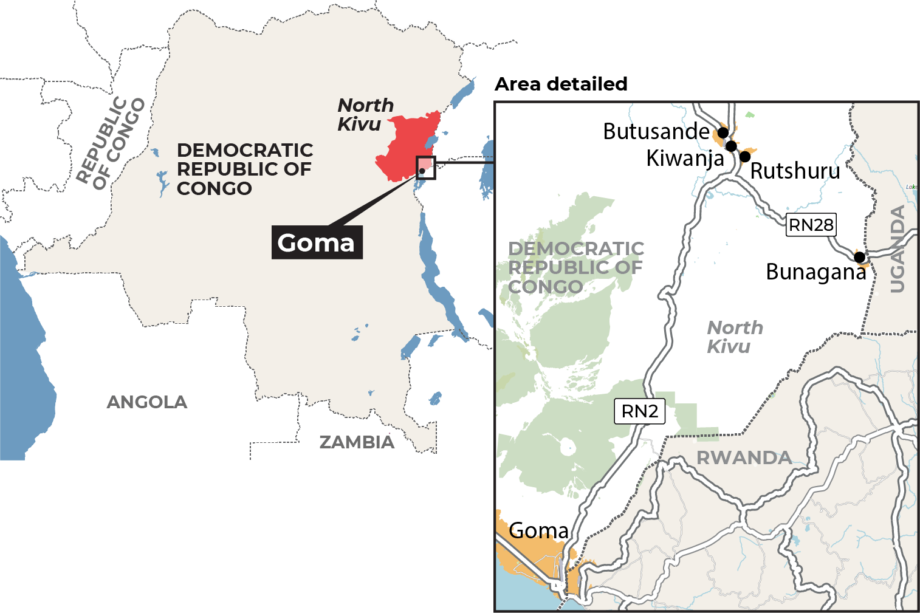 The fighting between M23 and the FARDC in DRC’s North Kivu over perceived discrimination is not new, but the renewed fighting has displaced an estimated 390,000 people as of Nov. 28, 2022, including several thousand since late October, according to the United Nations High Commissioner for Refugees. An M23 spokesman says the situation is unprecedented, as the group has never maintained control of such a strategic area for so long. “This is our homeland, and we will never cede any part of our territory,” Willy Ngoma, the spokesman, said in a phone interview with Global Press Journal.

In North Kivu province, the M23 occupies the towns of Bunagana, Rutshuru and Kiwanja. North Kivu, one of DRC’s 26 provinces, shares borders with Uganda and Rwanda. The city of Goma and several other DRC regions are supplied with staple food products, such as sugar, maize flour, vegetable oil and rice, from Uganda through the Bunagana border, which runs through the Rutshuru territory. The Bunagana border and customs post has been blocked since June 2022, when the M23 occupied the area, months before the tension escalated to its current point. The only open border now linking Uganda and DRC is in Kasindi, but it is far from Goma, 382 kilometers (237 miles) away.

Pépé Mikwa, a Goma-based economist, says the commercial flow through Bunagana is extremely important, and that its capture, as well as the roadblock between Rutshuru and Goma, is choking the city and its population. “I already foresee acute food insecurity in our homes in Goma,” Mikwa says. “With the internal displacement of war refugees to the outskirts of the city, as well as the increase in market prices, the population is suffering.” 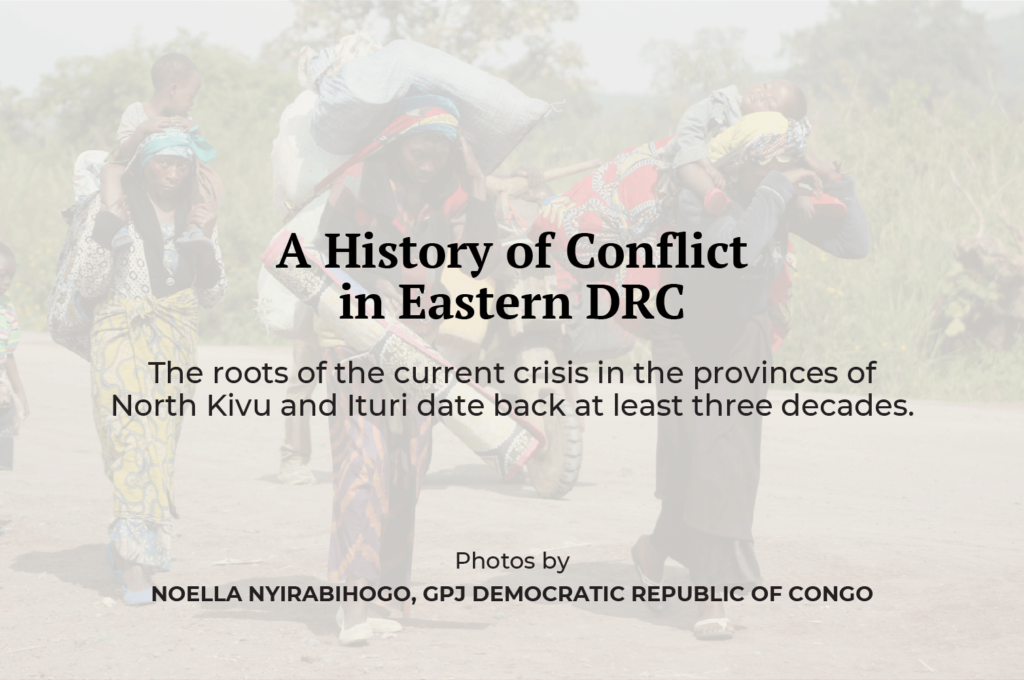 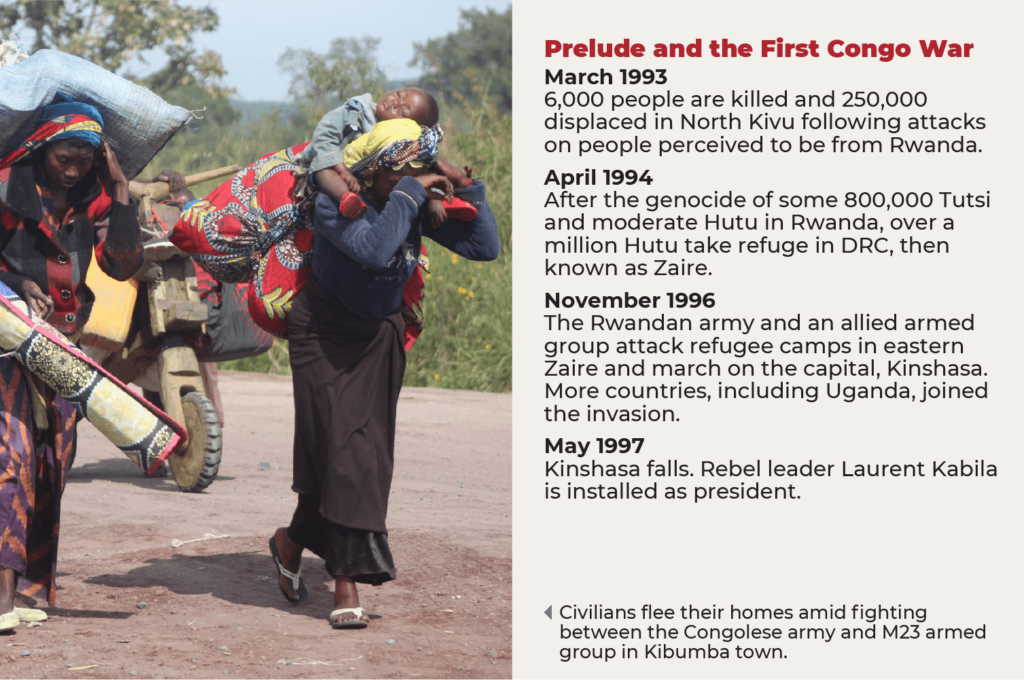 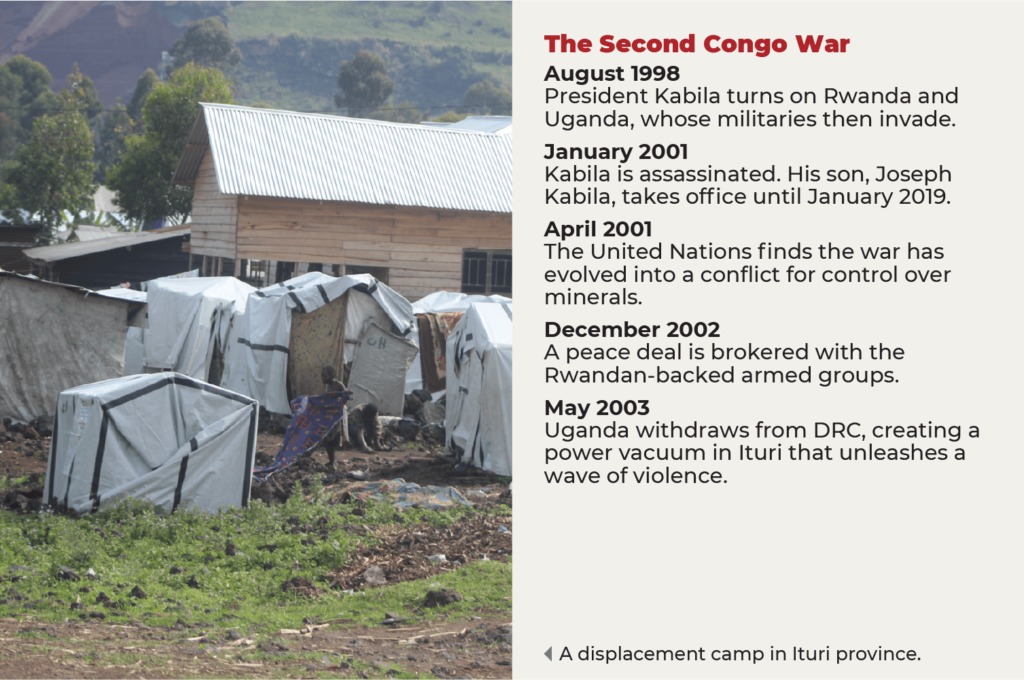 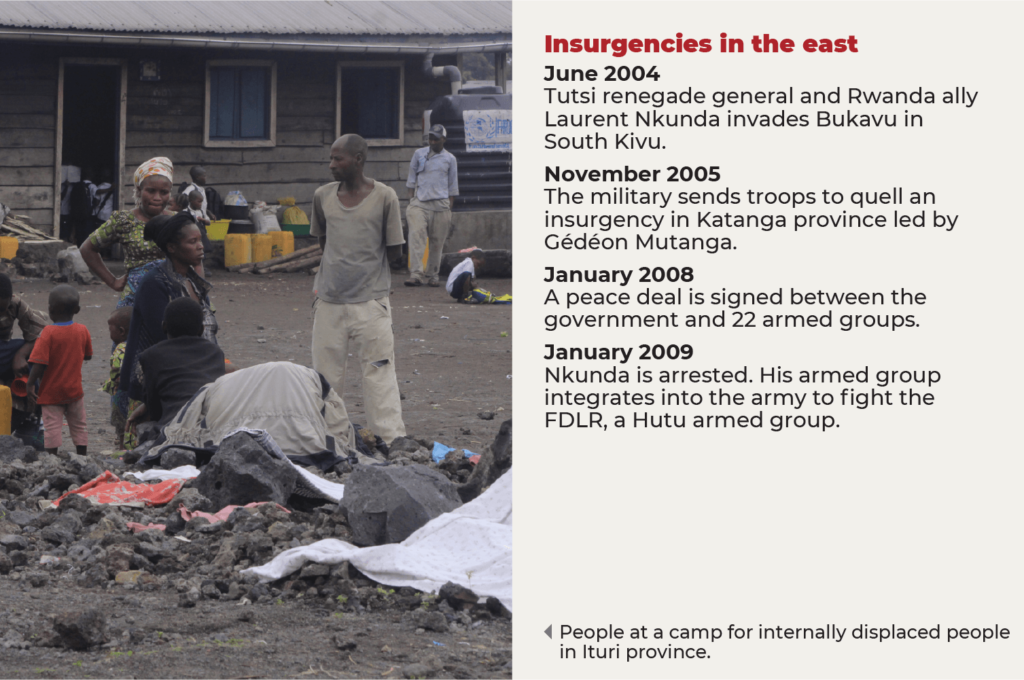 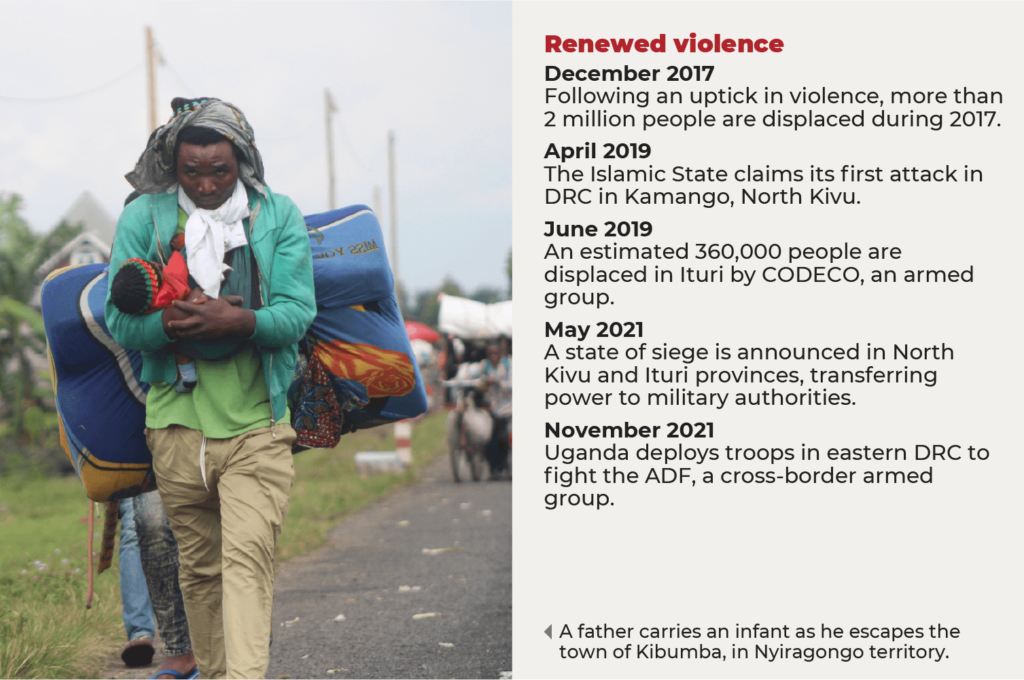 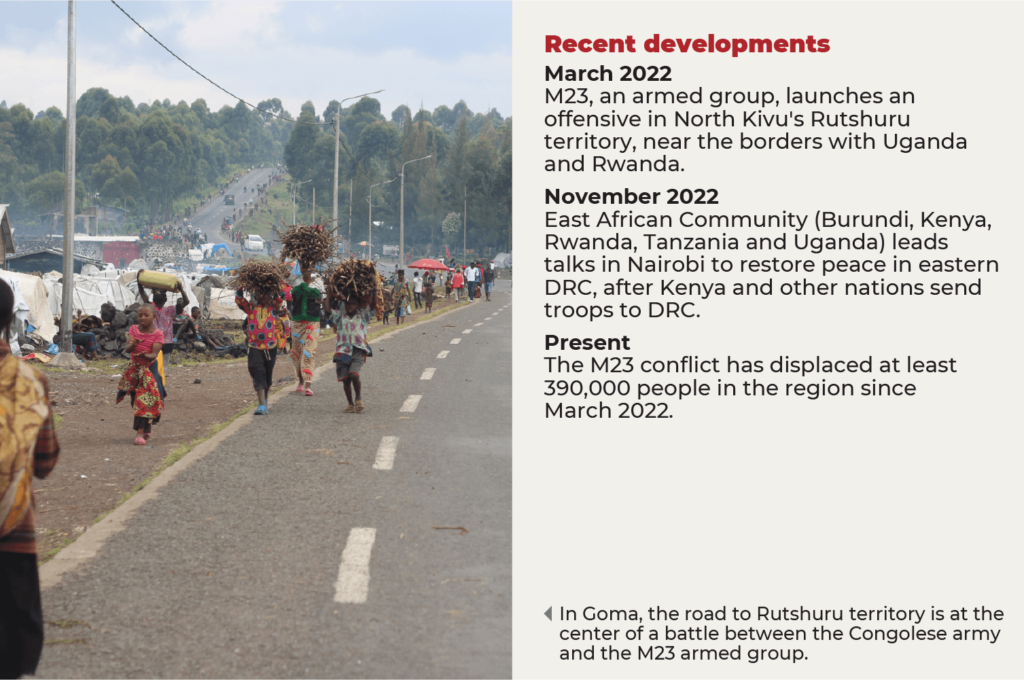 Current prices shock market consumers, who opt to buy less. Annuarite Mirembe, a mother of seven, had to reduce the quantity she fed her family because, as a teacher, she cannot afford the same amount anymore. “Before, I could buy two fish and 2 kilos of rice [per day]. Now, I am forced to buy less,” she says. “Life is getting harder and harder. We don’t know how to get by.”

Gen. Sylvain Ekenge, commander of the communication and information service of the FARDC, reassures the people of the region: “The army will do everything possible to recover all the conquered areas, and I assure you that not a single centimeter of our country will be left under the thumb of the M23.”
Pointing to an empty stall, Jeanine Sikujua, 62, a fish seller in the Virunga market for more than 20 years, says, “Ever since the road closed, us smoked fish sellers, who would get our supplies from the village of Vichumbi, are suffering because we can’t find anything to sell.”

Marrion Ngavho, president of a civil society in Goma, says that his organization estimates that the border closures will cost the country several million dollars. He says, “The only solution to the food crisis in Goma is an immediate end to the M23 rebellion.” Otherwise, he says, life for residents will only get harder. 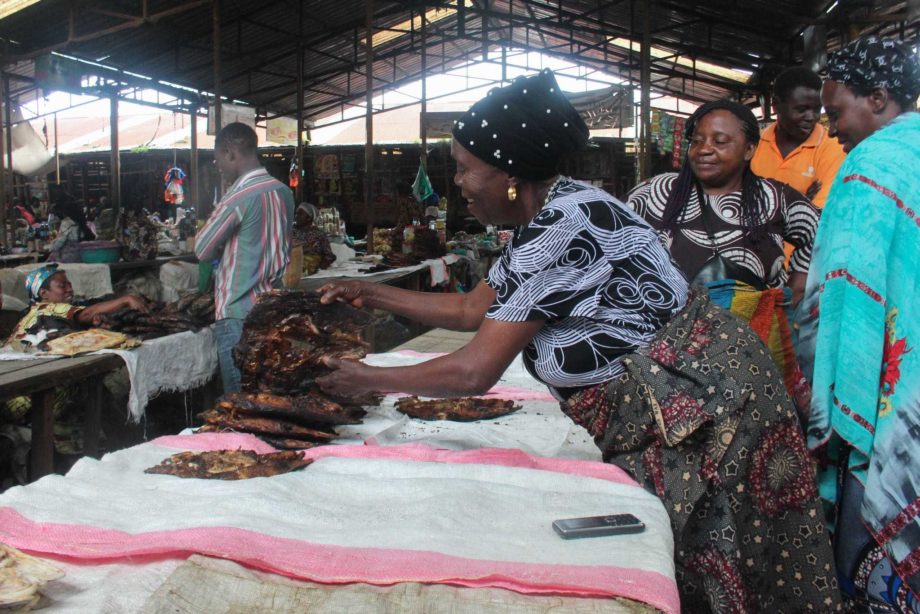 Jeanine Sikujua stands at her fish stall at the Virunga market in Goma and explains to customers why she has a limited selection.