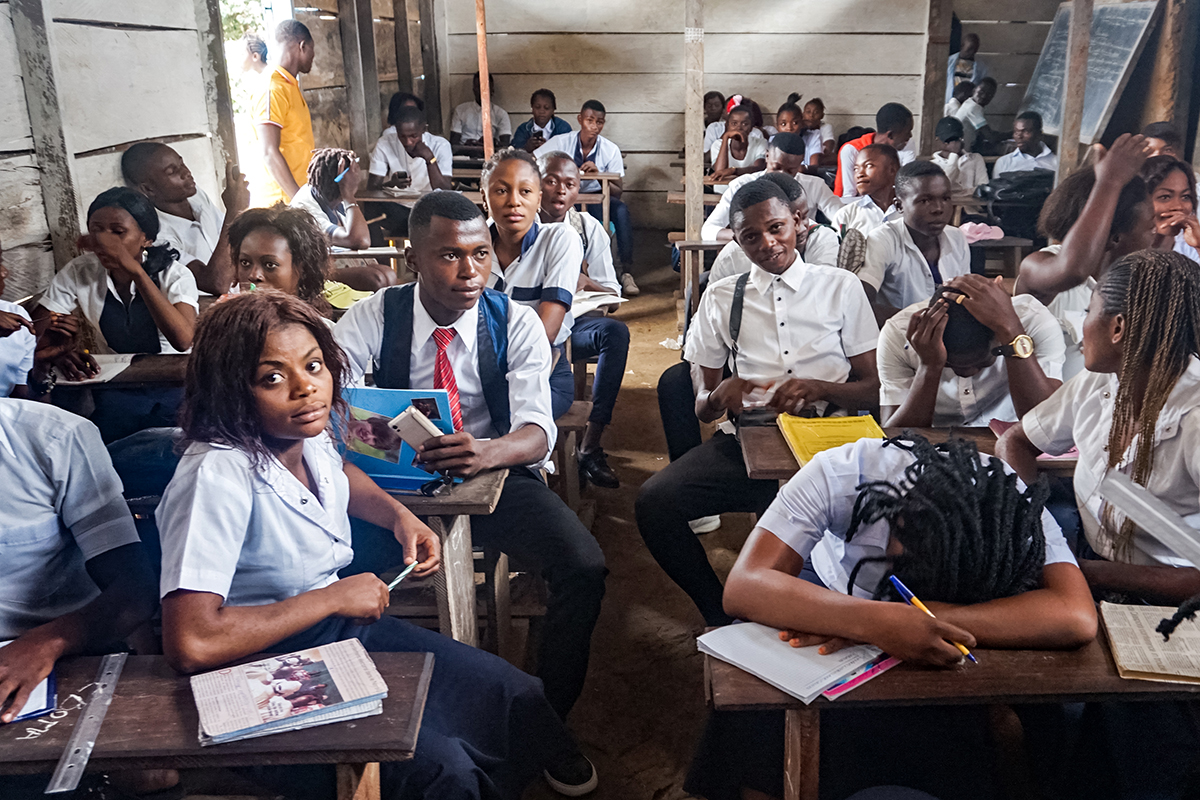 KISANGANI, DEMOCRATIC REPUBLIC OF CONGO — Annifa Bolissa, 13, goes to school in a small wooden schoolhouse. At least 65 students cram into the makeshift schoolhouse every day. The flimsy building lacks running water and places to sit outdoors. There is one toilet for everyone to share.

“Our classroom is very small,” Annifa says. “I try to arrive at school on time to get the best place to sit, so I can stay focused in class, even though many students have to squeeze together on one bench to make room for everyone. It’s hard to be a diligent student in here.”

Annifa’s school, Groupe Scolaire Tuendelee, is one of a growing number of informal schools popping up throughout DRC’s Tshopo province. This school and others like it are privately owned and built from timber. These schoolhouses are responding to the high number of students here who need education, but the quality of the structures is not only inconvenient but potentially dangerous, says Toms Akusa, a father of three students at the school.

The informal structures are prone to flooding, Akusa says.

The temperature inside the schoolroom makes it difficult to learn, Annifa says.

“When it’s about 12 o’clock, the roof begins to heat up, and the heat is pushed down into our classroom. You have to be bold to stand the heat,” she says. “We have no choice but to endure this suffering and concentrate to understand what the teacher is saying.” 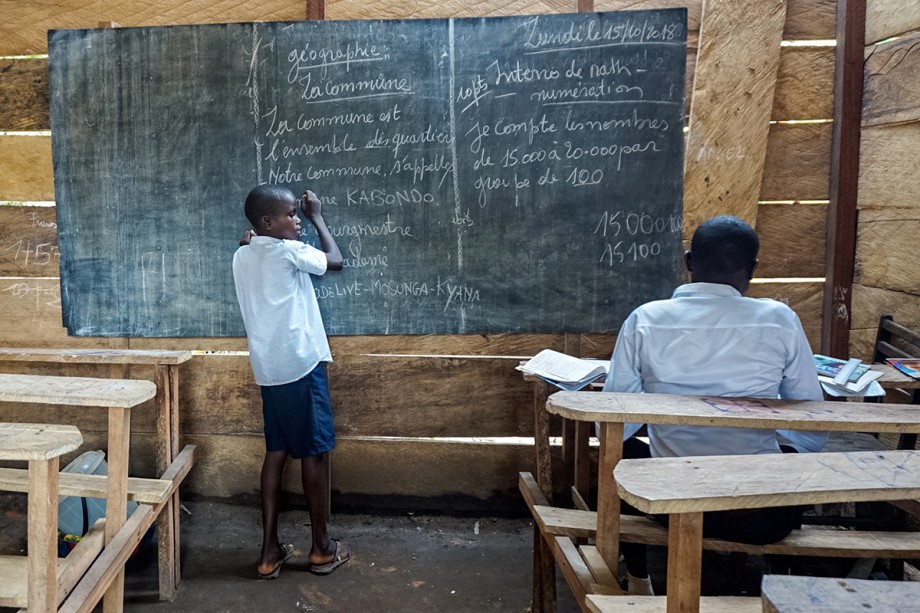 Mathieu Lobesa Kapita, 11, studies geography with his teacher in a wooden schoolhouse in the Kabondo neighborhood.

There are other challenges, too.

Girls and boys of all ages have to share the same toilet. Some parents discourage their kids from using the facilities at school because of a fear of infection. Parents tell their children to hold it all day.

“I’ve acquired the discipline to relieve myself only at home,” Annifa says, adding that the job of cleaning the toilet falls to students who arrive late for class.

Privately owned structures used as schoolhouses began to appear in Kisangani, the largest city in the Tshopo province, in the 1990s. The schools do not meet the standards set by the Congolese government, but little is done to close them down.

As many as 65 percent of schools in Kisangani, one of DRC’s largest cities, do not meet regulatory standards, says Likunde Lya-Bossongo, provincial president of the Association Nationale des Écoles Privées Agréées (ASSONEPA), the national association of licensed private schools.

Owners of the private schools are supposed to secure a license and meet three basic conditions: proper materials, school administration and start-up funding. But that’s not happening in most cases, says Nendolo Moliso, the provincial minister of primary, secondary and vocational education.

“These schools don’t really teach anything and are thus undermining the future of our society,” he says. “They deserve nothing less than to be shut down.”

Omari Salamabila, a school inspector, says schools often rely on corruption to avoid getting shut down.

“Unfortunately, some school owners bribe inspectors to keep them from reporting to authorities in Kinshasa anything that can result in preventing them from being licensed,” Salamabila says, referring to the country’s capital. “This is why we have so many unsustainable schools.”

David loshanga, who owns one such local school, denies any allegations of corruption on the part of schoolhouse owners. 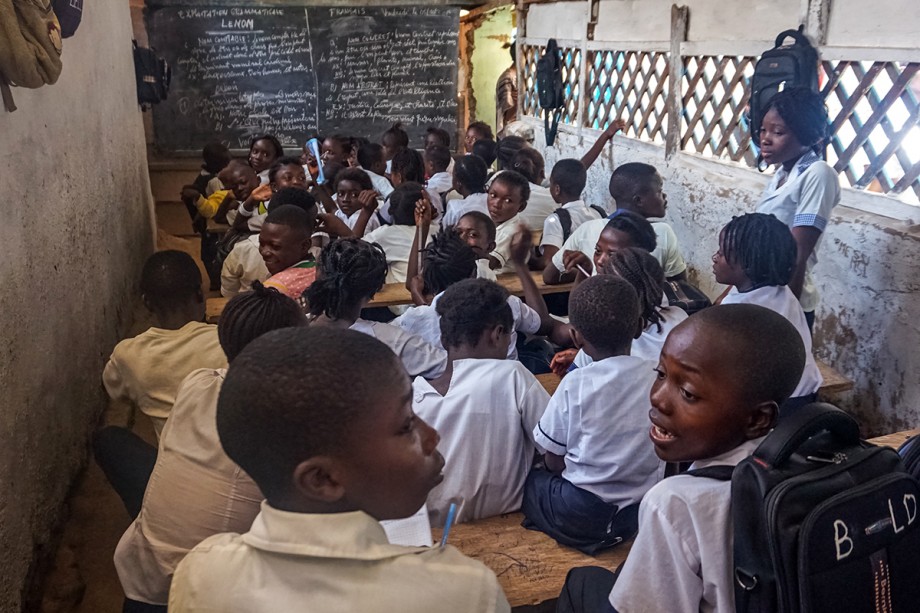 The Grace a Dieu school in the Kabondo neighborhood has packed classrooms and lacks educational materials. Students at the school say there are no bathrooms, and students from three grades fill one room.

Local parents say they have few options to educate their children.

Marie Sophie Bwana walks her two daughters to school every day. She says she picked the school closest to their home for a simple reason.

“We can’t afford the cost of transportation to and from school,” she says. “To me, the school’s physical condition doesn’t matter; it’s the desire to see my daughter go to school that counts.”

Nendolo Moliso, the minister of education, has issued several statements urging all owners of private schools to protect students by building schoolhouses from sturdy timber.

“They have to look for ways to comply with mandatory infrastructure standards, to be able to deliver better education for our kids, because our kids are our tomorrow’s future,” he says.