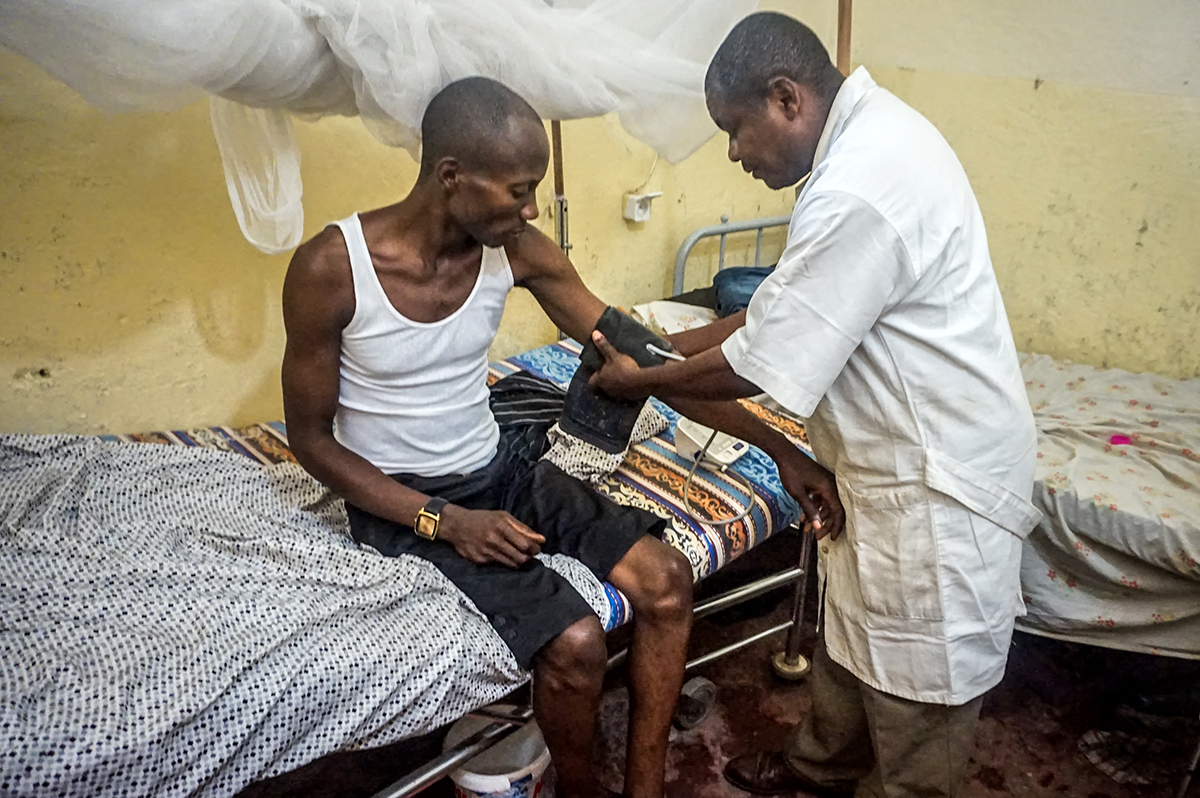 KISANGANI, DEMOCRATIC REPUBLIC OF CONGO — In the courtyard of Prison Centrale de Kisangani, hundreds of inmates are seated side by side, some leaning against each other.

As many as 15 to 20 are crammed into a cell designed to contain four, says Papy Lulua, a former inmate at the prison in Kisangani, the capital of DRC’s northeastern Tshopo province. Lulua, who spent five years there, says overcrowding and poor sanitary facilities mean inmates are constantly at risk of contracting infectious diseases from one another.

“I spent a part of my life behind bars at Prison Centrale de Kisangani, but appalling living conditions have had an adverse effect on my health,” he says. Lulua has been living with tuberculosis for many years now, but he contracted the infectious disease for the first time while in prison.

The central prison is the largest incarceration facility in Tshopo province. When faults in province-wide distribution networks interrupt water or electrical supply, diseases spread even faster.

In 2013, DRC’s 120 detention centers of various types held nearly 21,000 prisoners, according to the World Prison Brief. Although the government began conducting audits of prisons across the country in 2012 to monitor the management of funds in the system, living conditions in a majority of these facilities remain harsh and at times life-threatening, according to a 2013 U.S. government study on human rights in DRC. In some prisons, inmates sleep on metal sheets instead of mattresses. In others, inadequate potable water, lack of ventilation and limited access to medical care pose severe health hazards.

Prison Centrale de Kisangani, which has been in operation since the 1920s, continues to grapple with poor living conditions. A prison officer, who requested anonymity for fear of being fired, says the facility currently has 1,500 inmates, though it was designed to accommodate 600.

Apart from overcrowding, inmates at the prison have been hard-hit by infrastructure challenges in local water and electric distribution networks. Following overflooding of the hydropower plant on the Tshopo River on Nov. 9, 2017, many in Kisangani had no access to electricity and clean water. The crisis forced inmates to consume unsafe water. From Nov. 14-24, personnel at the prison reported 39 cases of cholera. Before the water supply was disrupted, there were only three cases of diarrhea in the prison, says Dr. Paul Lisimo, who has been treating sick inmates for 17 years.

While the lack of water contributed to the most recent outbreak of diarrheal diseases, congestion and unclean toilets accelerated transmission, Lisimo says.

Similar outbreaks have occurred in recent years, he says. Seventy percent of inmates were diagnosed with tuberculosis in 2017, making it the most common infectious disease in the prison, Lisimo says.

Provincial government officials declined to speak on the record, citing lack of authorization to comment to the press. Off the record, one acknowledged that officials re aware that prisoners live in inhumane conditions but suggested that responsibility lay with the central government, not Tshopo province.

“It’s not here in Kisangani where the prisoners are living in poor condition only, but all over the DRC,” the official says. “So, it’s not up to us – the provincial government – to settle this issue, but rather to the central government from Kinshasa.”

Patrick Lisilo Mbatu, who has been an inmate for seven years, says his health has deteriorated. He says he often falls ill because he is surrounded by other inmates with infectious diseases.

Lulua says his experience was similar.

“I came down with TB for one and a half months because we had no alternative but to share drinking containers, eating utensils and buckets,” Lulua says.

“There are not two consecutive months that pass without [my] being hospitalized, and the recent epidemic of cholera did not spare me,” he says. “I was hospitalized for two weeks.”

While water supply has been restored to the prison since Dec. 25, the cholera outbreak has prompted prison officials to take measures to contain the spread of the disease, says Dr. Lolo Ofoili, chief medical officer at the prison.