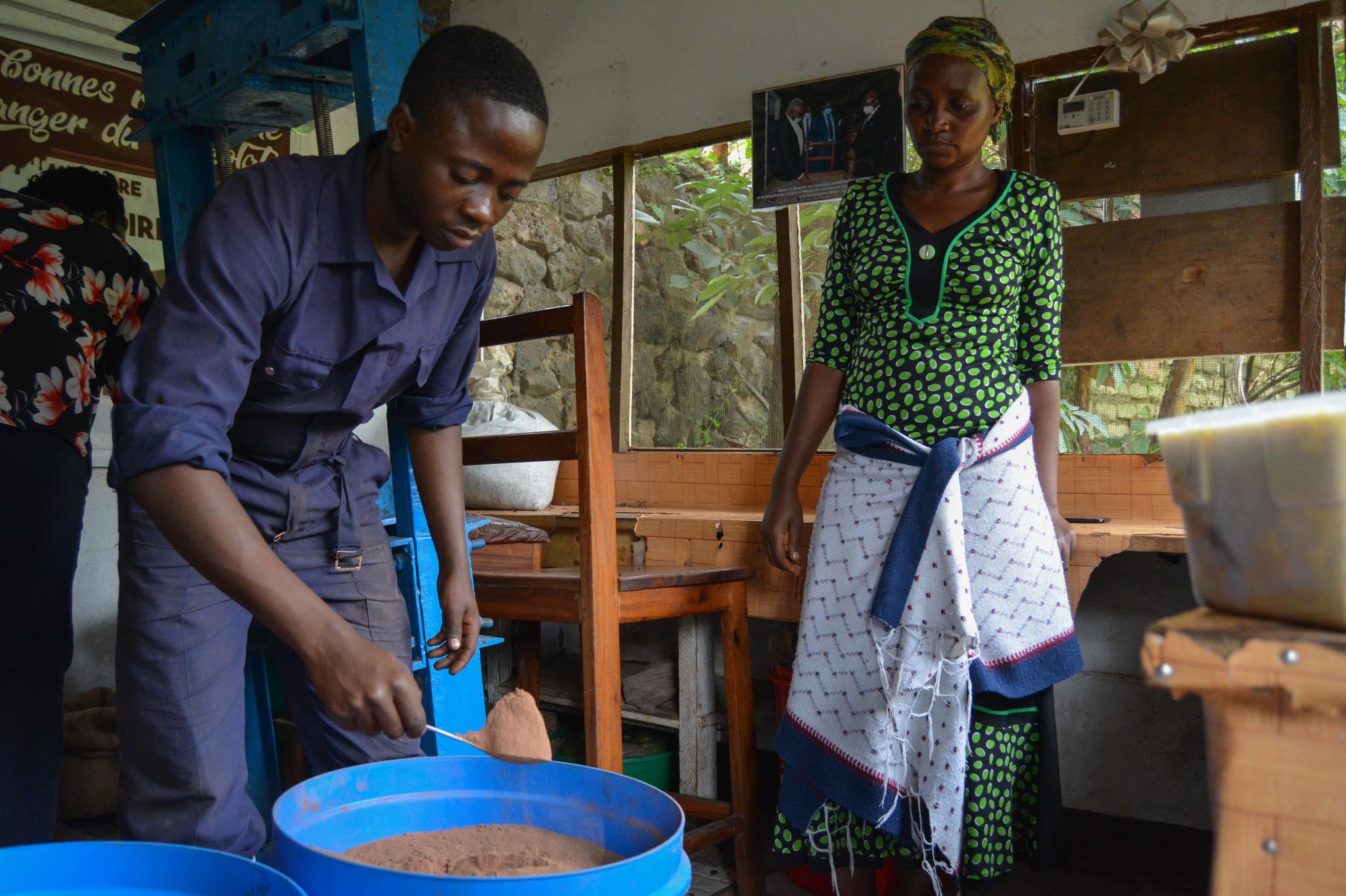 GOMA, DEMOCRATIC REPUBLIC OF CONGO — The cocoa industry in this eastern stretch of DRC had all but disappeared when Alexis Kalinda Salumu decided to try and save it.

Years of armed conflict had forced farmers to abandon their fields and nearly destroyed production in his home of Walikale, a forested region with thick, juicy soil. But a more peaceful environment in recent years gave Salumu hope that he could salvage the industry and produce DRC products that enticed both a local and international market.

Salumu in 2019 launched his processing company, Chocolaterie Lowa, from a small white house stocked with little bites of dark chocolate truffles, bittersweet bars of chocolate, and smooth cocoa butter extracted from nuts in a locally-made machine next door.

His export goal seemed closer than ever in January, when the United States added DRC back to the list of countries that receive special trade provisions, known as the African Growth and Opportunity Act. The two-decade-old agreement gives countries in sub-Saharan Africa duty-free access to the U.S. market if they meet certain human rights and free market requirements. DRC joins a list that includes Kenya, South Africa and more than 30 other nations that stand to benefit from the export of such products as copper and cobalt.

But the optimism of entrepreneurs like Salumu is tempered by DRC’s limited infrastructure and an array of logistical hurdles, revealing the complexities of a deal that had been quickly heralded by both countries. 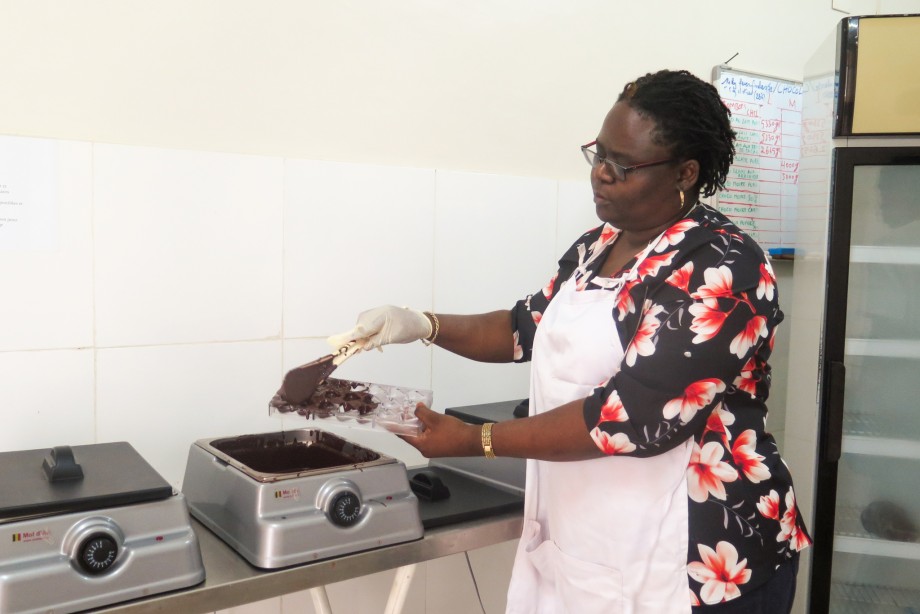 “It would be a lie to say that local businesses will profit from the reintegration,” says Asumani Aboubakar, a professor of political science at the Université Libre des Pays des Grands Lacs in Goma, a city in eastern DRC. “To be able to export to a powerful country like the United States, one needs quality production, and DRC does not have qualified processing plants.”

The deal, devised in 2000 under the administration of former U.S. President Bill Clinton, intends to promote U.S. trade and investment and encourage democratic reforms. It involves more than 1,800 products, from coffee to precious metals.

DRC became eligible in 2003 and reached a record $5.1 billion in exports to the U.S. by 2008. But former U.S. President Barack Obama removed the country from the program in 2011 due to alleged human rights violations under former President Joseph Kabila.

Fighting between armed groups during Kabila’s tenure, especially in the eastern region of the country, led to the displacement of more than 5 million people. By 2013, exports to the U.S. had dropped to $75.6 million. 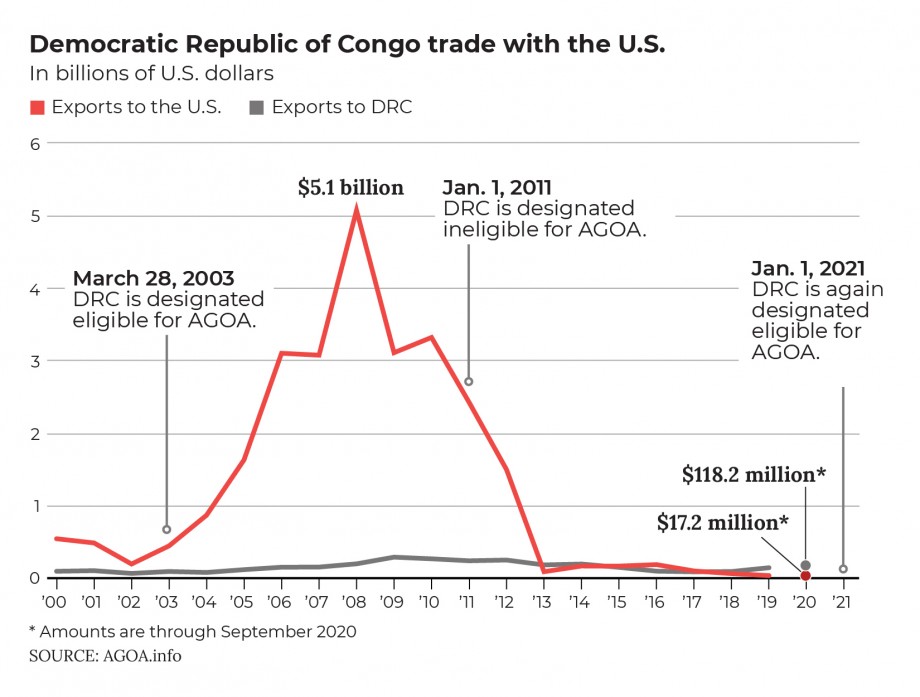 The U.S. saw a new opportunity in 2019 with the election of Félix-Antoine Tshisekedi, which marked DRC’s first peaceful transfer of power. Tshisekedi signaled a transition by releasing political prisoners, creating an anti-corruption agency, promising free public primary and secondary education, and speaking against human rights violations in eastern DRC.

This deal “is recognition of President Tshisekedi’s commitment to bringing about the change the Congolese people desire and deserve, which includes combatting corruption, protecting human rights, promoting security and peace, and creating economic opportunity,” said Mike Hammer, the U.S. ambassador to DRC, in a December announcement about the reintegration.

Tshisekedi’s administration frames its revived status as a boon for the country.

“This opportunity will promote an economic balance within the country,” says Simon Kanduki, economic and portfolio adviser for North Kivu province, which includes Goma. “There will be the possibility to export Congolese products and reach more or less 230 million consumers.” 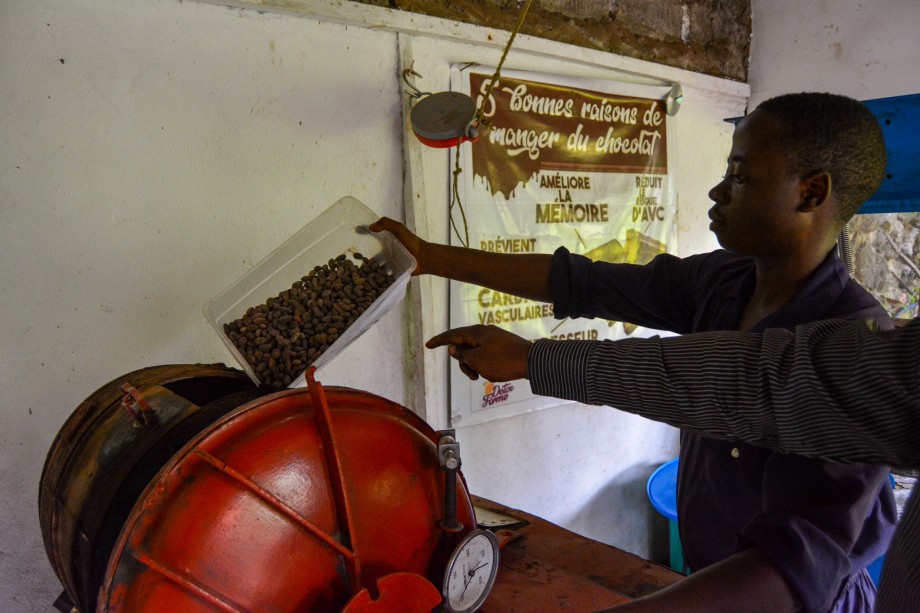 That will prove tough for entrepreneurs like Salumu, the chocolate maker. He needs a loan to build a processing plant that will allow him to produce enough goods for export. But there are no agricultural banks to assist. And even if he could obtain funding, crumbling roads make it difficult to transport goods.

Financing is a persistent issue in a country where the average monthly income reached about 75,000 Congolese francs ($38) in 2016, when the national statistics office conducted its last household survey.

DRC historically has struggled to benefit from trade deals due to poor infrastructure, strict rules of origin, and a shaky business environment, according to a 2008 report by the International Monetary Fund. 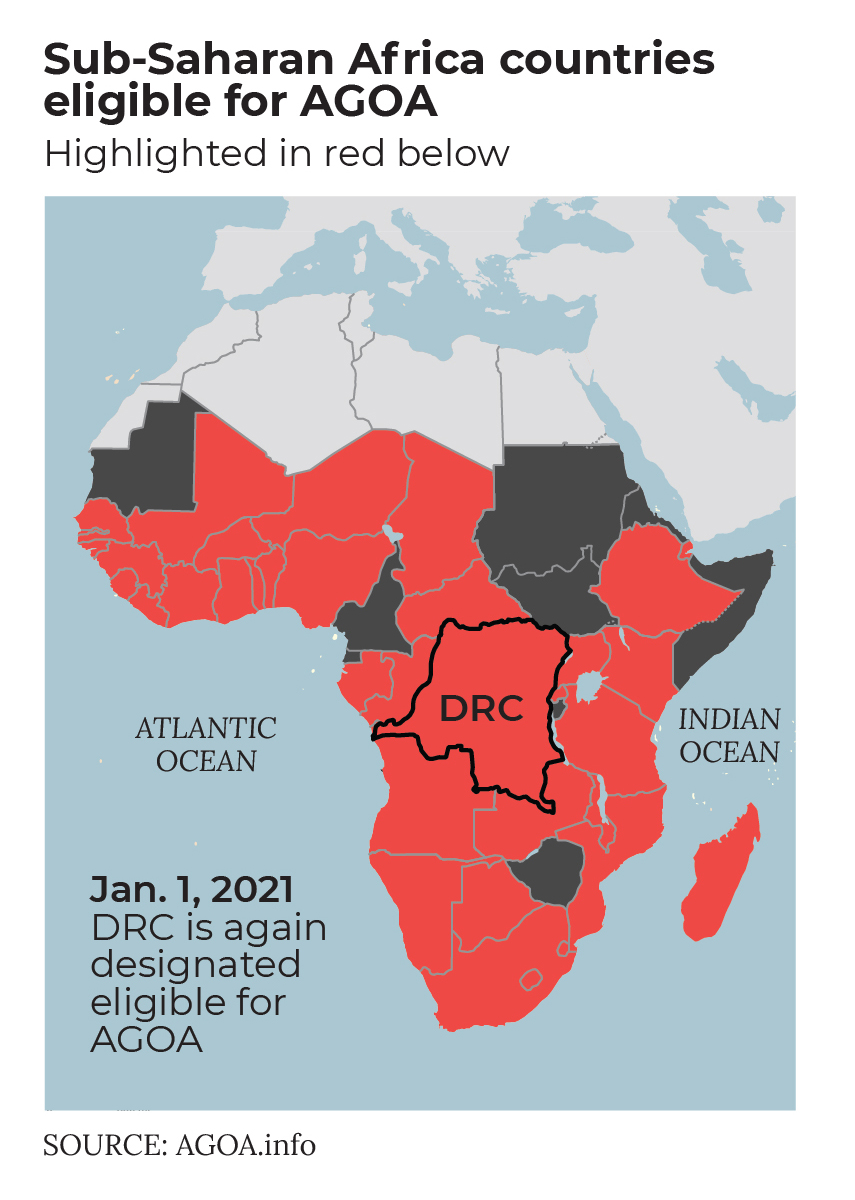 But some African countries have done well by the trade pact. Nigeria, a lead exporter, sells millions of dollars in oil, according to the Trade Law Centre, a South Africa-based organization that focuses on trade in Africa. South Africa prospers from exports in the extractive and manufacturing sectors. Kenya, also a major exporter, focuses on apparel.

That spurs DRC’s ambitious entrepreneurs, including those in the cocoa-producing industry.

Marie Paul Bambaga, a representative for the Initiative des Femmes (Congolaises) dans le Café – Cacao, a group of women engaged in the cocoa industry, says exporting such goods as chocolate bars to the U.S. would change the economic situation of cocoa producers. But successful entrepreneurs require training and investment.

“We need state-of-the-art factories capable of manufacturing products that will meet international standards,” as well as a focus on building skills, she says.

The government recognizes that need but sees it as an opportunity for the private sector rather than the state. “We call on investors to support local entrepreneurs, so that they can have the capacity to manufacture products that meet the standards required by the international market,” says Kanduki, the economic adviser.

Rosy Kalinda is ready to showcase her goods. The manager of Chocolaterie Lowa, she spends her pre-dawn mornings kneading dough for chocolate bars. The zingy scent of vanilla and cocoa fill the room, sometimes augmented by an infusion of chili or ginger. It’s the kind of smell that makes anyone reach toward the chocolate bars on the table. 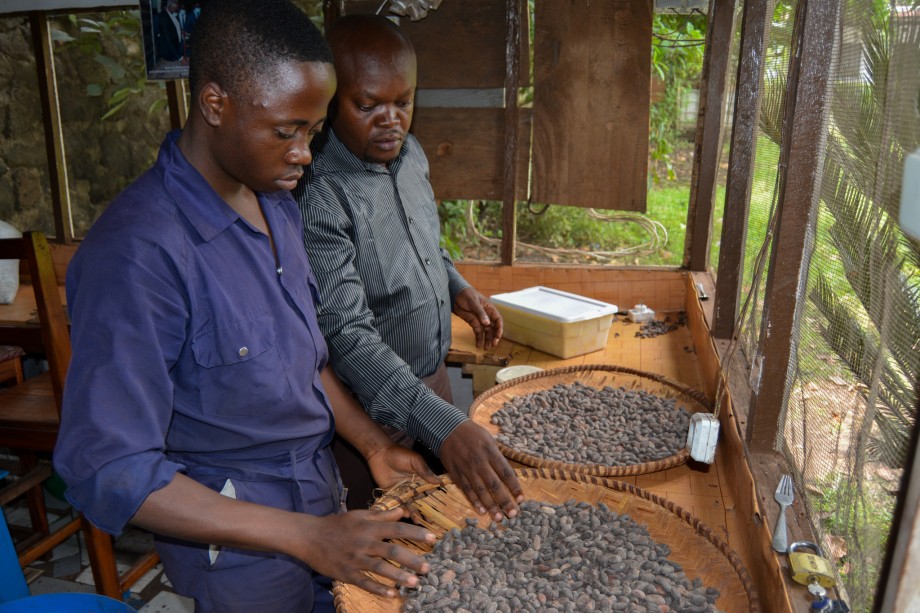 Jacques Bendesana Galongo (left) and Samuel Katembo Lulemandi process cocoa nuts in a factory in eastern DRC. They turn the nuts into powder as part of the chocolate-making process.

Kalinda didn’t understand why her neighbors were consuming imported chocolate when she could look out her window and see rows of cocoa trees. Now, she’s anticipating reaching far beyond her community’s borders.

“It would be a dream to see our products being sold in the U.S.,” she says. “I’m sure that our chocolates would beat the record if we got a chance to sell them on the international market.”