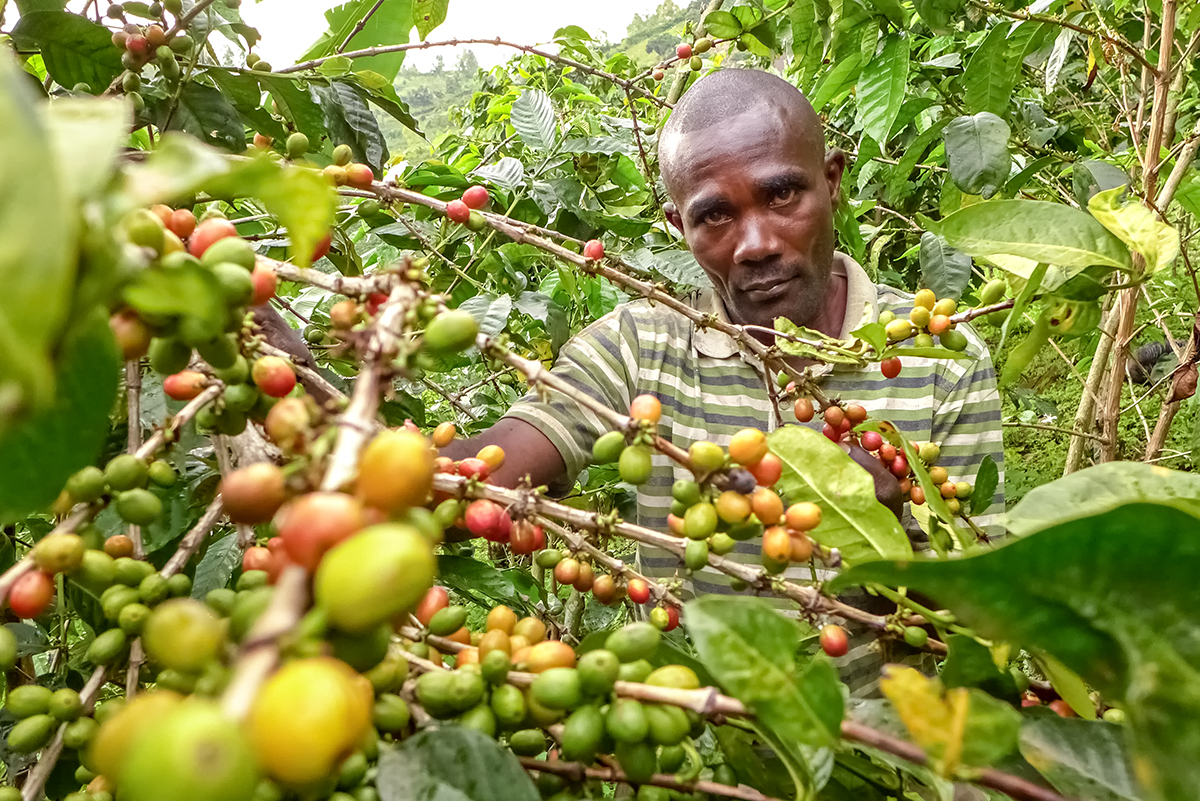 She lives in the heart of one of the world’s most celebrated coffee regions, but Mwaka says she can’t earn enough money from that crop to care for her family.

For years, she has sold her beans on credit to buyers from cooperatives, organizations that have garnered international praise. But she says she has yet to see the money she’s owed, even as Congolese coffee grows in popularity around the world.

“There is little trouble and high profitability,” she says.

Today, small coffee farmers sell a kilogram of coffee for 400 Congolese francs (about 55 cents per pound) – a price that doesn’t even begin to reflect the work that goes into producing that coffee. That’s when they get paid at all. Often, farmers such as Mwaka say, their crops were taken on credit, but they were never fully paid. 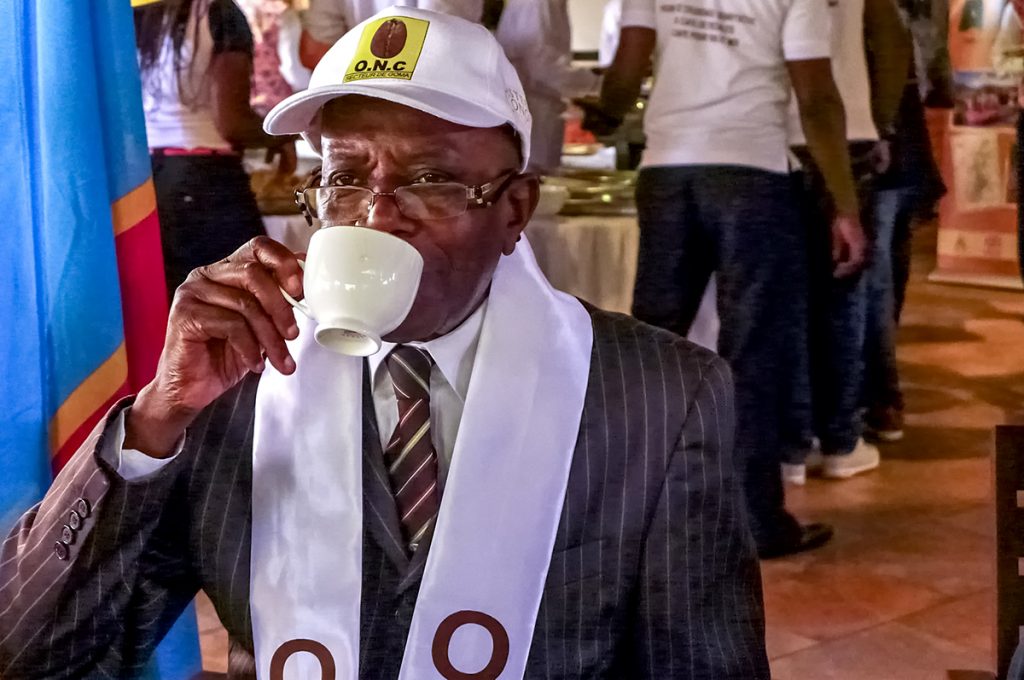 Christophe Ndibeshye samples coffee in Goma, the capital of North Kivu province in Democratic Republic of Congo. Ndibeshye is the provincial minister of agriculture, fisheries and livestock. The government has taken steps to boost the coffee industry in eastern DRC. 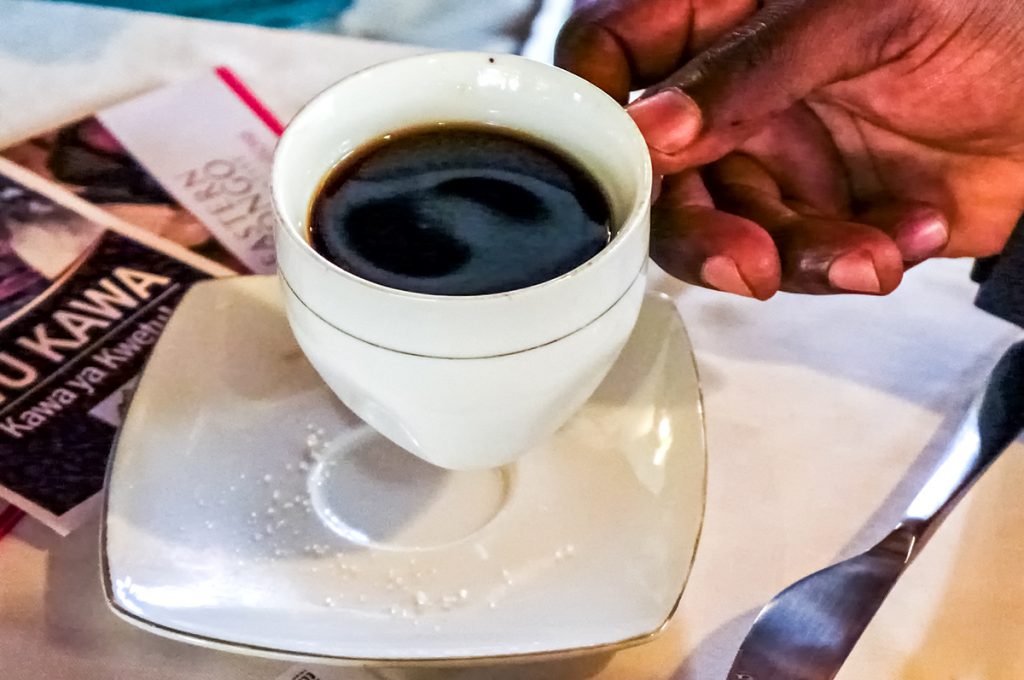 Coffee grown in Democratic Republic of Congo is considered among the best in the world, but coffee farmers there say cooperatives, while internationally acclaimed, often don’t pay fairly for the coffee they buy and then resell to major coffee buyers. 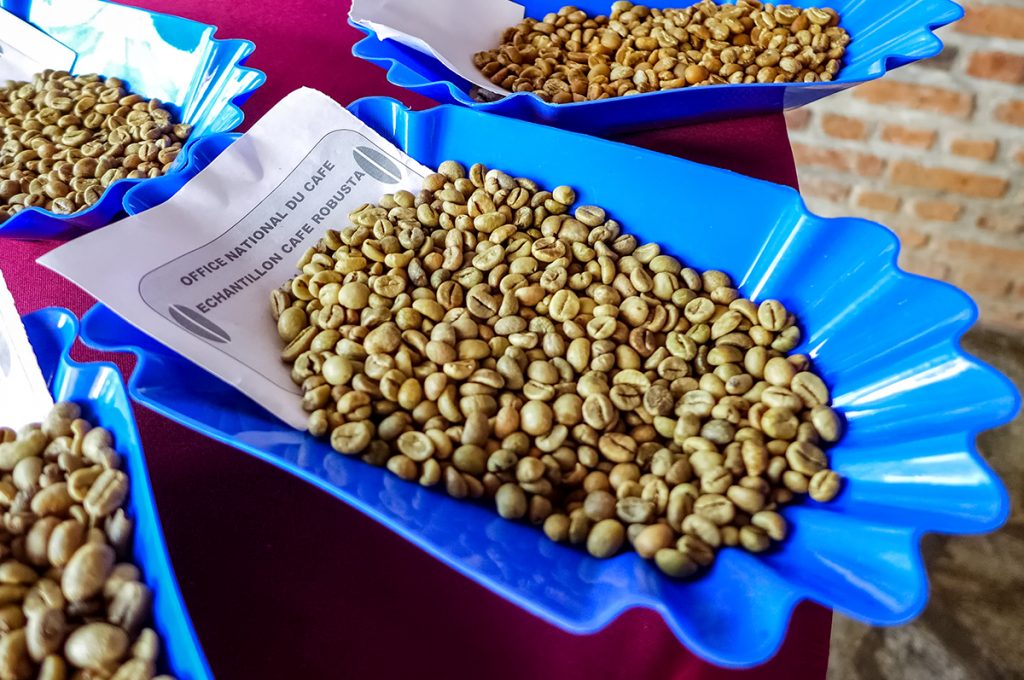 Congolese coffee farmers grow both robusta and arabica beans. Robusta is often easier to grow and has a limited flavor range. Arabica, on the other hand, is prized for its flavor varieties but is considered more fragile.

The cooperatives that sell the coffee on the export market take in between $1 per kilogram (45 cents per pound) and $4 per kilogram ($1.80 per pound), Mwaka and other farmers say.

In some cases, they bring in much more than that. A group of coffee exporters in Goma – the capital of DRC’s North Kivu province, about 80 kilometers (50 miles) south of Masisi, where Mwaka lives – sell coffee to Starbucks for $6.20 per kilogram ($2.80 per pound).

The cooperatives have received widespread acclaim in the U.S. and in other western countries, where Congolese coffee and the cooperative systems that help export it are proudly advertised in high-end shops. Mwaka and many other farmers say that acclaim is misplaced.

“They get rich off our backs,” says Innocent Lunyere, a 42-year-old coffee grower and father of eight who cultivates coffee in DRC’s South Kivu province, which is also known for its coffee crops.

The cooperatives selling coffee grown in the region include SOPACDI and MUUNGANO, two organizations touted by the U.S. Agency for International Development (USAID), which has had a hand in reviving eastern DRC’s coffee industry. Many western coffee companies take beans from those and other cooperatives and sell them in the U.S. and in other major markets. Mwake says she sold her beans to SOPACDI.

But SOPACDI and other cooperatives don’t pass their earnings back to farmers, Mwake and other coffee growers say. 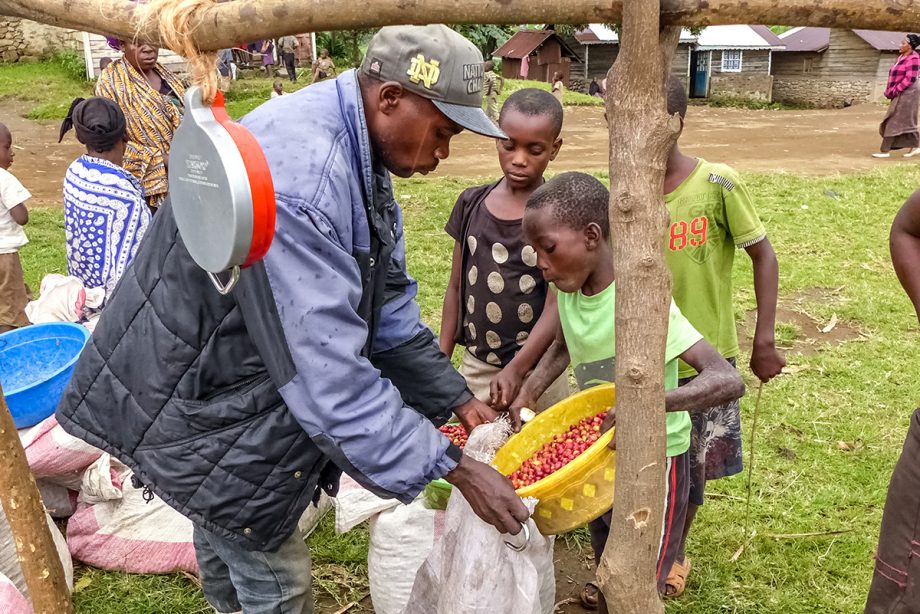 Cherif Himbana, a sector manager for SOPACDI, a coffee cooperative, buys coffee cherries from growers in the village of Muhanga in Democratic Republic of Congo’s South Kivu province.

Messages left with Beth Ann Caspersen, a quality manager at Equal Exchange, a U.S.-based coffee company that bills itself as “fair trade,” were not returned. Equal Exchange buys coffee from SOPACDI. Representatives at Equal Exchange told GPJ that Caspersen manages the company’s relationships in DRC.

Coffee is the most widely grown crop in eastern DRC. It’s not uncommon to find small homes – whether the humble ones of ordinary farmers or the well-appointed abodes of comfortable coffee barons – tucked away in the areas that were once coffee plantations. The tradition of growing coffee here dates back to the colonial era, but local people still view the process of growing coffee as one with the potential to bring luxury.

In the early 1980s, coffee was DRC’s second-largest export, after copper. The crop was key to propping up the national budget in the 1970s, when the country was known as Zaire.

Even so, Congolese coffee growers earn a pittance compared with growers around the world, according to International Coffee Organization data. Between 1995 and 1998, Congolese growers earned, on average, about 67 cents per pound of arabica coffee. Cuban growers, for comparison, earned $1.88 per pound during those years for the same type of coffee. 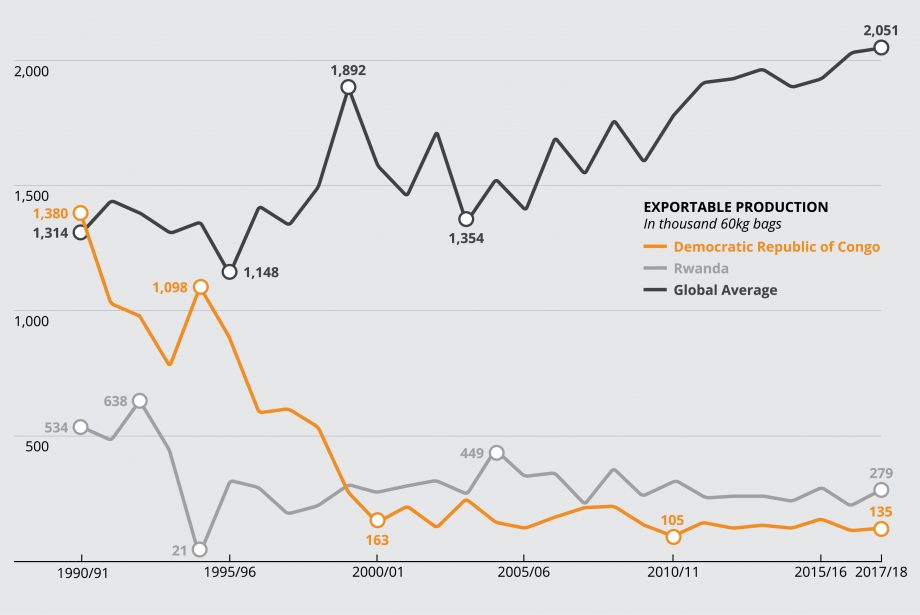 According to the International Coffee Organization, DRC produced 82.8 million kilograms (about 183 million pounds) of exportable coffee in the 1990-91 season, the oldest season for which the organization makes data readily available. This was just above the average global production per country for that season. While global production per country has grown since the 1990s, the DRC’s crop has declined, with the reported 2017-18 crop yielding just over 8 million kilograms (17.6 million pounds).

Some farmers have tried to earn better prices by smuggling their beans into Rwanda, where they were labeled as Rwandan coffee and sold into the market. Tracking the amount of Congolese coffee that has been sold as Rwandan-grown beans isn’t easy, but Congolese coffee farmers say the practice is common.

As DRC’s official coffee-export numbers have plummeted, some experts believe that the actual coffee production has remained constant, but most of the coffee has actually been sold in Rwanda or even Uganda.

It’s difficult to know exactly how much coffee Congolese farmers grow. A 2017 USAID report estimates that most farmers cultivate less than a single hectare (about 2.5 acres) of land, producing between 100 and 400 kilograms (about 220 to 880 pounds).

They get rich off our backs.Innocent Lunyere, a 42-year-old coffee grower

Some representatives of the cooperatives say there’s little they can do to help coffee farmers.

“While our farming practices having remained the same for years, we continue to grow coffee under extremely challenging conditions,” says Gilbert Makelele, an official with a cooperative of coffee growers and dealers (Coopérative des Planteurs et Négociants du Café au Kivu).

There is no agricultural bank to provide farmers with capital to buy better equipment or land or to hire extra workers, Makelele says. And just getting the coffee to the marketplace is sometimes impossible, he adds, because armed militias sometimes block roads. Other times, during rainy seasons, roads are impassable.

Everyone in the coffee supply chain needs to agree to minimum acceptable prices, says Jules Mpalume, who heads the North Kivu provincial section of the national coffee board (L’Office National du Café).

“There’s a need to look into ways to set equitable prices and sensitize the public on the plight of smallholder farmers, as they expect to rely on coffee production to lead a dignified life,” he says.

Still, it could be years before coffee prices are high enough to make growing the crop worthwhile for many Congolese farmers.

For Mwake, bananas are the best option.

“We realized that those who grow bananas are more stable than we coffee growers,” she says.

Correction: The price of coffee per pound noted in this story was updated due to a mathematical error in the original story version. This story has been updated to include the correct name of the Minister of Agriculture for North Kivu province. His name is Christophe Ndibeshye. Global Press Journal regrets the error.