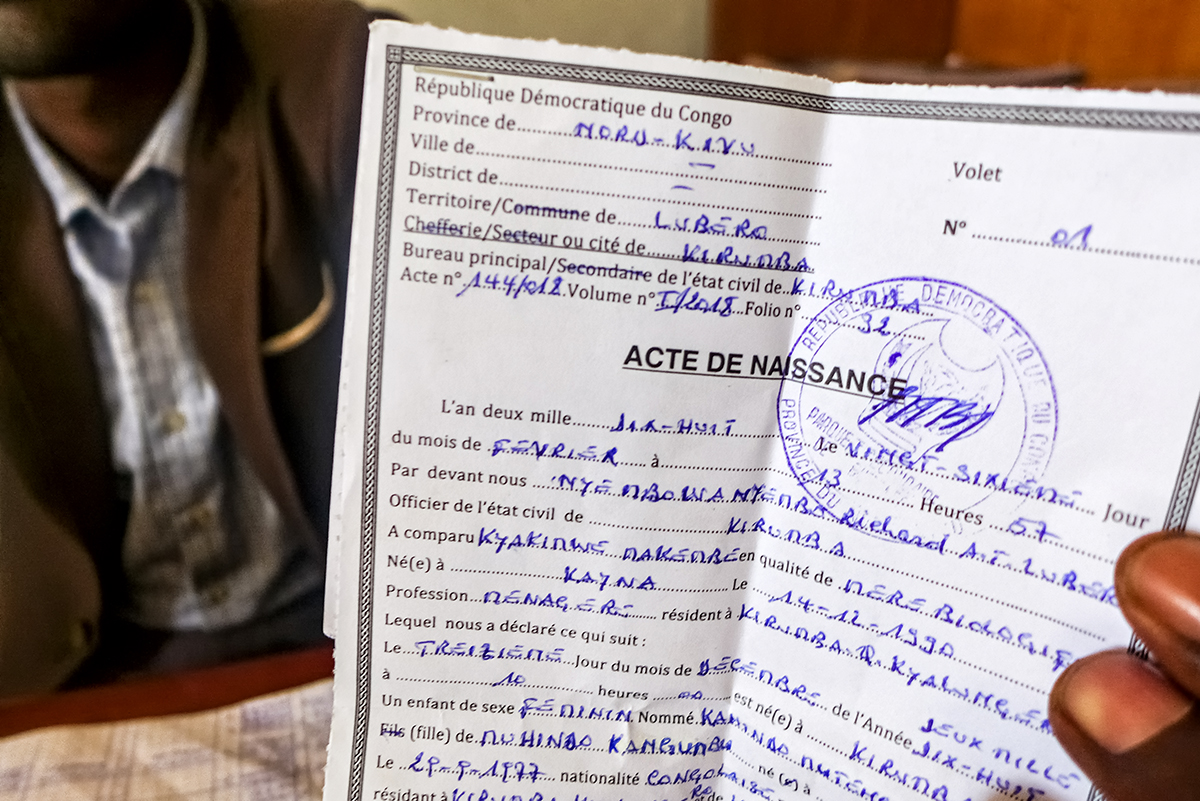 KIRUMBA, DEMOCRATIC REPUBLIC OF CONGO — In Kirumba, a village in DRC’s northeastern Lubero territory, land ownership is the basis of all wealth. It’s also a matter of succession – a person inherits land from his or her parents.

But not without a birth certificate.

Bea Masika, a Kirumba resident, tells a cautionary tale about land ownership. She grew up with her mother at her grandparents’ home and was registered for a birth certificate that listed her grandfather instead of her father.

“That is the reason why I did not have the right to my biological father’s inheritance,” Masika says.

She says she registered her own children for birth certificates as soon as she could.

Not all children in DRC – nor all adults – have this critical document.

André Paluku Sengemoja, the registrar of civil status in Kirumba, says he knows there are people in the territory without a birth certificates, but confirming any population data is difficult without a recent census. Some people without birth certificates are more than 20 years old, he says.

Property-inheritance court cases here are common, as the lack of birth certificates leads to disputes over who is entitled to land when a person can’t prove her or his parentage.

Pitchen Maseka, the administrative secretary of Kirumba, has presided over five land-dispute cases since the beginning of the year. He saw eight cases last year and 13 cases in 2016. Most of the time, cases involve a child without a birth certificate, he says.

In DRC, beyond land inheritance, birth certificates are required for identification, health care, education at some schools and obtaining a passport.

More Congolese citizens are recognizing the importance of attaining a birth certificate, thanks to the efforts of humanitarian associations working in the area. Sengemoja says that since January, 359 children in Kirumba have been registered for birth certificates. In 2017, 397 people were registered in total.

Without a birth certificate, citizens cannot apply for a passport or access some education and health care. They also cannot inherit land without proving their parentage.

The lack of birth certificates among Congolese citizens, Sengemoja says, is a result of the First Congo War in 1996.

“For more than 20 years, many people have not had birth certificates because of the wars that ravaged this country,” he says. Census-taking ceased, and people stopped registering their children for the document.

Prior to 1996, attaining a birth certificate was easier.

Kambale Ndaghala, an economic operator in Kirumba, is a father of three. All his children have birth certificates. His first child was born in 1988, under former DRC president Mobutu Sese Seko.

Ndaghala says he grew up in a culture in which people were in the habit of immediately registering newborns for birth certificates. As conflict swept the country, that culture broke down.

“If, in these days, many children do not have birth certificates, it is because of the repetitive wars that have plunged people into ignorance and some irresponsibility of the state,” Ndaghala says.

According to DRC law, families must register a child for a birth certificate, typically at the civil registrar’s office or the mayor’s office, within 90 days of the birth. There is no fee to register within this time frame.

The first step toward registering more citizens for birth certificates, according to humanitarian groups, is awareness.

Antoinette Kanyere, a mother of eight from Kirumba, says only one of her children is registered for a birth certificate. She says she was only recently informed through a local radio spot of the need for registration.

“If these seven others are not registered, it’s because we did not know,” Kanyere says.

The local development nongovernmental organization Solidarité pour la Promotion des Métiers et d’Action au Développement (SOPROMAD) began its work in the city of Butembo in 2016 and expanded into Kirumba last year. The group creates short radio advertisements and speaks with community members to encourage registering for birth certificates. The Norwegian Refugee Council (NRC) has been doing similar work in the area since 2016. 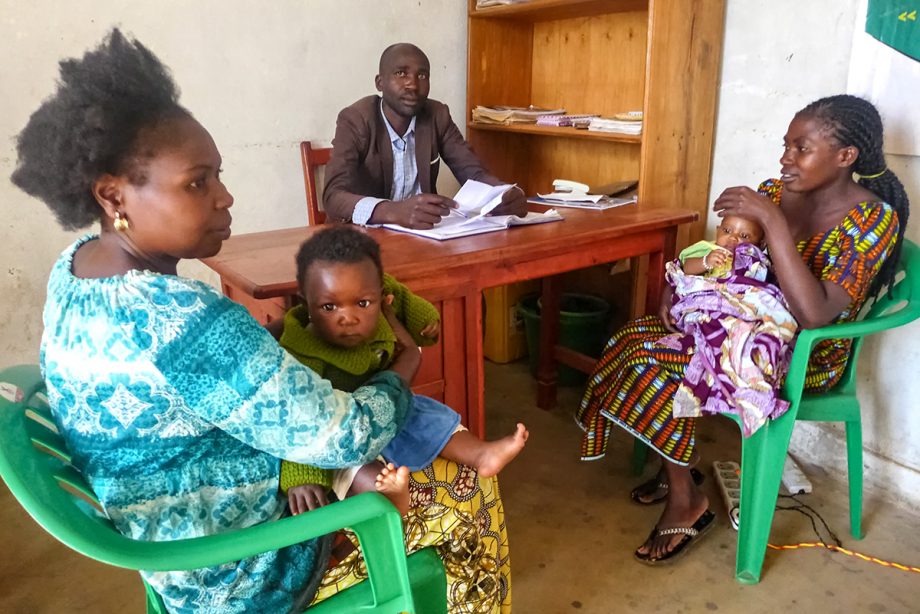 Charles Mahwa, center, of the SOPROMAD humanitarian group, sits in his office with parents who brought their children to register for birth certificates. SOPROMAD has been broadcasting radio spots during the past two years to encourage registration.

Charles Mahwa, a SOPROMAD representative, says the group has multiple goals: It encourages people to obtain birth certificates, so they can acquire Congolese nationality and prevent land and inheritance disputes, but the organization also aims to make demographic data available.

“When data are available, it’s easier for authorities to make good decisions while thinking about programs which are beneficial to the population,” he says.

Mahwa adds that demographic data will allow humanitarian projects to more accurately serve the number of people in need.

Rachel Kyakimwa, a resident of Kirumba, has obtained a birth certificate for one of her children.

“[I] obtained his birth certificate thanks to the awareness I received from the NRC at the market,” she says, referring to radio advertisements.

In other parts of the country, the process is not so easy.

“All my four children have birth certificates, because that’s the rule,” says Odiver Sabuni, a teacher. “Some parents neglect [the law], but in villages monitored by armed groups, the offices do not even open their doors, so that parents can even end up forgetting their civic duties.”

Those who are able to get to registration offices are recognizing the critical nature of acquiring birth certificates.

Ezee Kanendu is known as a “notable” in the territory of Lubero. In DRC, a notable is a trusted local person who represents a community in any matters presented to authorities. Kanendu says that access to birth certificates will reduce conflicts about land inheritance and succession.

Kahindo Mwandu, a teacher, says she has five children, only four of whom have birth certificates. But she has a plan for her other child.

“Today, I’m looking into the possibility of rushing him to the civil registrar’s office for fear that he might be denied Congolese nationality and feel discriminated against,” she says. “This way, I’ll prevent inheritance conflicts, as well.”