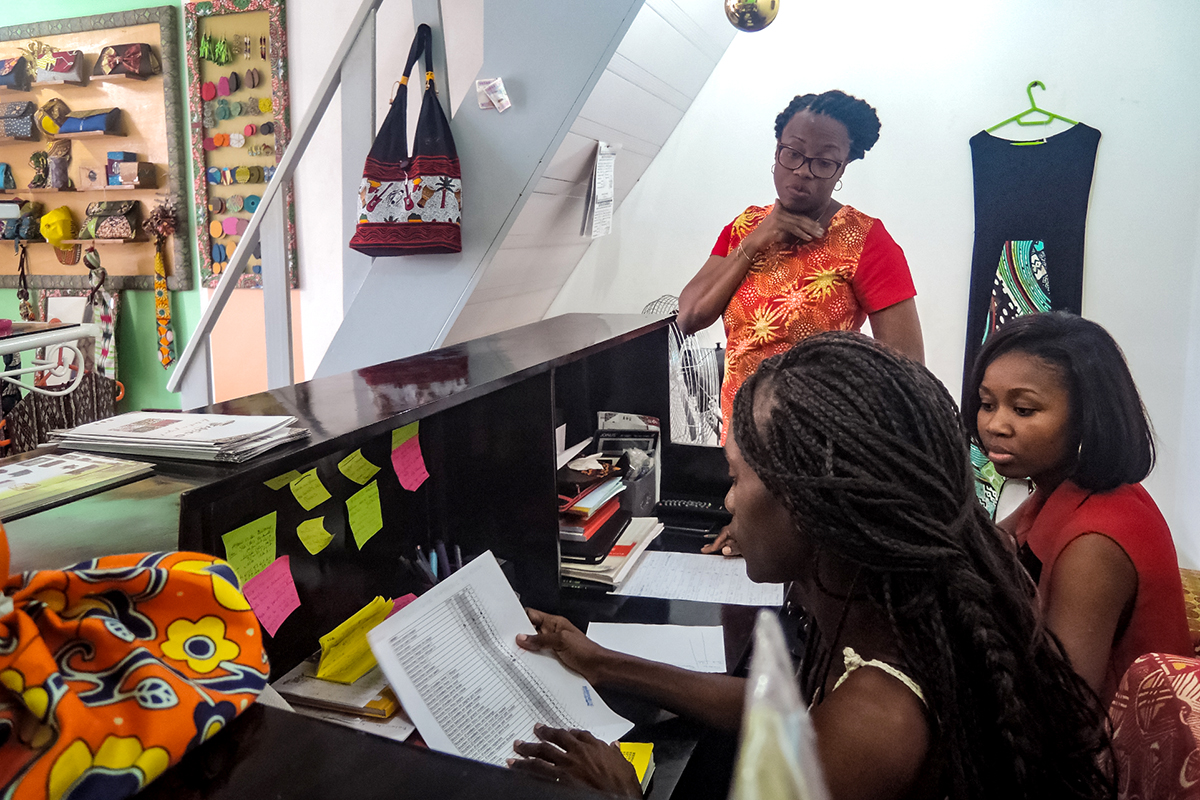 DOUALA, CAMEROON — Charlotte Horore Bebga keenly focuses on her laptop screen in a small co-working space at the KMR Start-Up HUB, in Douala, the largest city in Cameroon.

She’s preparing for a meeting about a big, upcoming event at the Cameroon Women Entrepreneurs Network, in which she is the secretary-general.

In 2014 she founded Likalo 2.0, a digital-marketing agency. She says young women starting approaching her for advice on how to get technology-related jobs. Three years ago, there were very few female technology entrepreneurs here, she adds. This inspired her to start another organization, African Women in Tech Startups, also called AfricanWITS, which is training women to create and to run their own technology businesses.

“I was one of the rare female technology entrepreneurs with a startup in 2014,” she says. “It was a new trend.”

Today, thanks in part to Bebga’s leadership, Cameroon is home to dozens of female entrepreneurs who are using technology to advance their businesses and diversify their client bases.

According to a 2016 report by Jumia, an African online marketplace with offices in Cameroon, 40 percent of women here are accessing products and services online.

Global Press Journal spoke with three women who are using technology to amplify their businesses and are supporting other women who want to do the same. 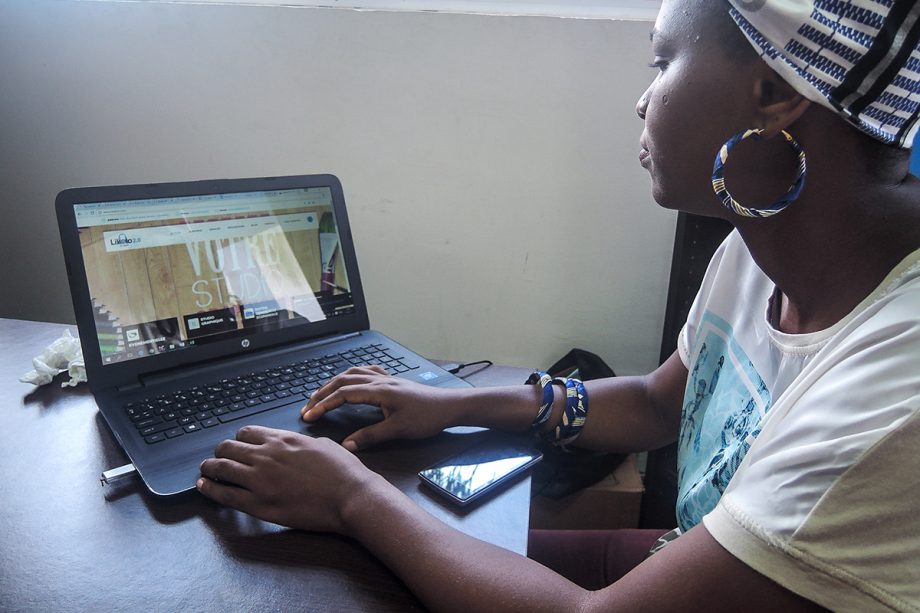 Bebga founded her second business, AfricanWITS, one year after she founded a digital-marketing agency.

“I wanted to create a platform for women to seize the opportunity the internet offers and launch themselves into entrepreneurship,” she says.

Bebga organizes three free training sessions per year for women with business ideas to utilize digital technology. The group works to develop and pitch the women’s business plans. At least three projects are selected at the end of the training, and the trainees become members of AfricanWITS, which gives them coaching and other resources to build their businesses.

Begba says she is optimistic about the role of women in technology here, but the biggest hurdle is getting women to embrace technology in their businesses. She says the majority of women she works with do not pitch technology-oriented business ideas at first because they are overwhelmed by the prospect of having to develop a website or mobile application – tools that many of them are not familiar with.

“We help them focus on the business aspect of developing their ideas, and we have a tech community working with us who develop the applications,” she says.

Getting women in Africa to use technology in their businesses will be a gradual and rigorous process, she says, adding that it’s a new concept for women to be able to manage their families and an online business.

“We continue the fight to help open more women’s eyes to seize these opportunities.” 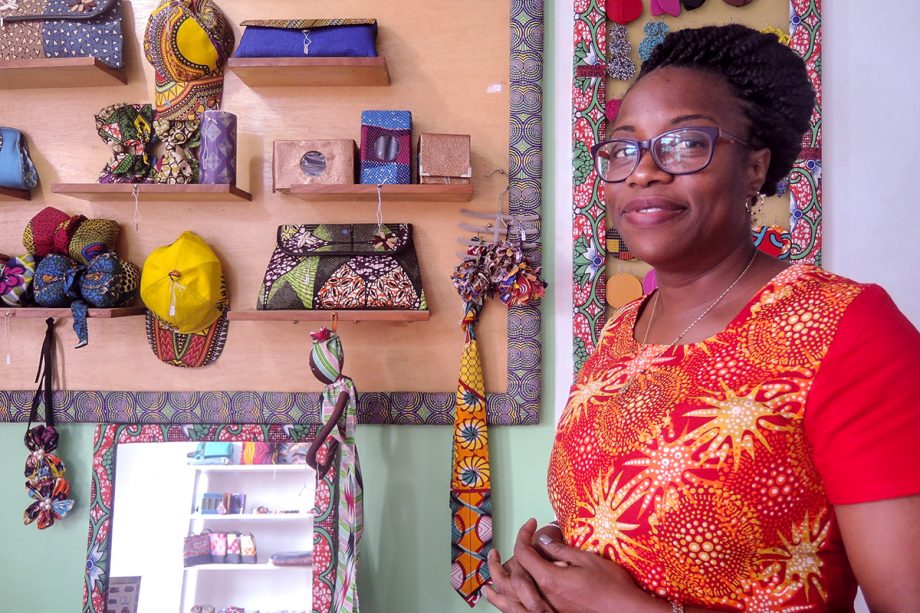 Diane Mullende Eboule, director of Africa Home, a company that produces articles made from African fabric, poses for a portrait in the company’s showroom in Douala, Cameroon.

In 2004, Diane Eboule made some extra money by selling African fabrics to friends.

But she was inspired on a trip out of the country to see how other women entrepreneurs in Africa were using kitenge, the colorful, patterned heavy wax cotton fabric common to the continent, to cover shoes and notebooks.

“I was selling fabric, but I realized that it can not only be sold as clothing,” says Eboule. “It can also be used to create document files, notebooks, gifts such as teacups and saucers.”

In 2016, she opened a showroom for her business, Africa Home, to sell fabric-covered decorations, accessories, gifts and clothing, all of which were conceived and produced in Africa, particularly in Cameroon.

Eboule works with artisans in Cameroon and in other African countries to produce the items. She conceives the designs, and the artisans work on the fabric to produce the articles. Today, she showcases her products in an online store, too. She also markets her products on sites such as Sellam Quick, a Cameroon-based online marketplace.

She says she’s glad to have her work showcased online to a global audience, but most of her customers are from her physical store.

“I think e-commerce is slow. We have an online store where clients can click to buy items and pay, but they prefer coming to the on-site store,” she says. Customers “don’t yet realize the benefit of clicking to order an item while sitting in their offices and have it delivered to them. But with the emergence of information on digital tools, things will change with time.” 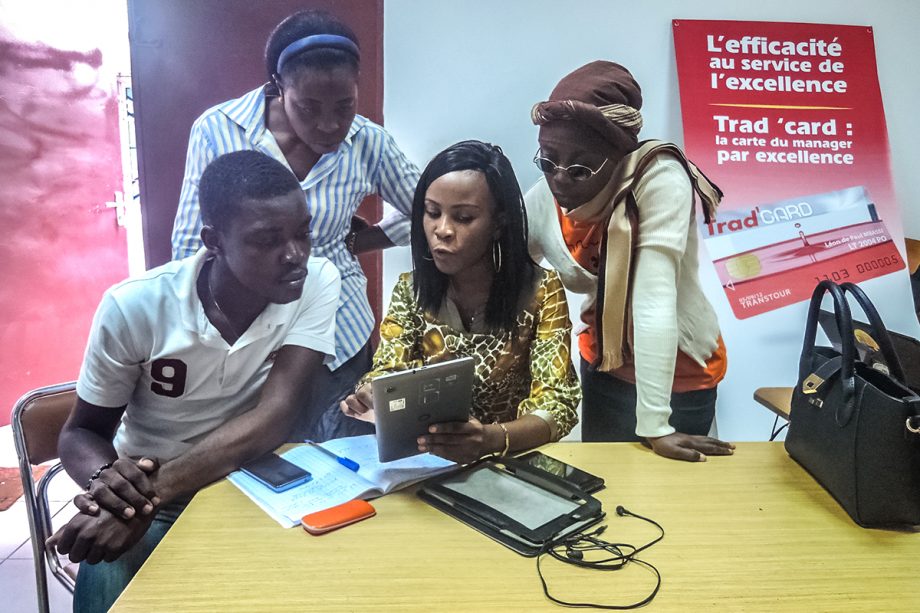 Mireille Kooh, CEO of the tech startup Afrik Digital Marketplace, shares her work with members of the Association for the Development of Entrepreneurship Among Persons with Disabilities). Kooh was a trainer at a workshop organized by the association in Douala, Cameroon.

Kooh is CEO of the pan-African virtual incubator Afrik Digital Marketplace (ADMP). She founded the company in 2015 to educate professionals from Africa on technology, innovation and entrepreneurship, she says.

Kooh and her team make use of technology to connect with ADMP members in different parts of the world. She collaborates with the founder, Hermann Djoumessi, a social-media lecturer based in Paris, to promote the incubator in Africa. She also works with partners and clients virtually, when her team consults on projects for entrepreneurs within Africa.

In a typical working day, Kooh is networking, looking for partners or representing the organization at events. The virtual incubator has about 25 clients based in Cameroon and France.

ADMP uses its Twitter page to send out clients’ messages and to get feedback from entrepreneurs, influencers and investors around the world.

Entrepreneurs pay 10 euros (about $12) for three tweets, and Kooh’s team writes articles for the entrepreneurs free of charge.

“We’re confident in our project, because we know it contributes to revolutionizing finance and technology in Africa,” she says. “It can permit entrepreneurs to grow faster in different markets in Africa and internationally.”

She says they receive requests from entrepreneurs who have just launched their products and need international exposure. ADMP helps them by offering an online platform for their concepts to expand beyond their local communities to the international scene.

“My advice to entrepreneurs is for them to adapt fast in the evolution of social networks, as it changes with the times,” says Kooh. “Today, entrepreneurs have to know how to sell [themselves] and cultivate the best practices.”