Skip to main content
The story you are reading was published on Monday January 18, 2016. To read more recent stories click here. 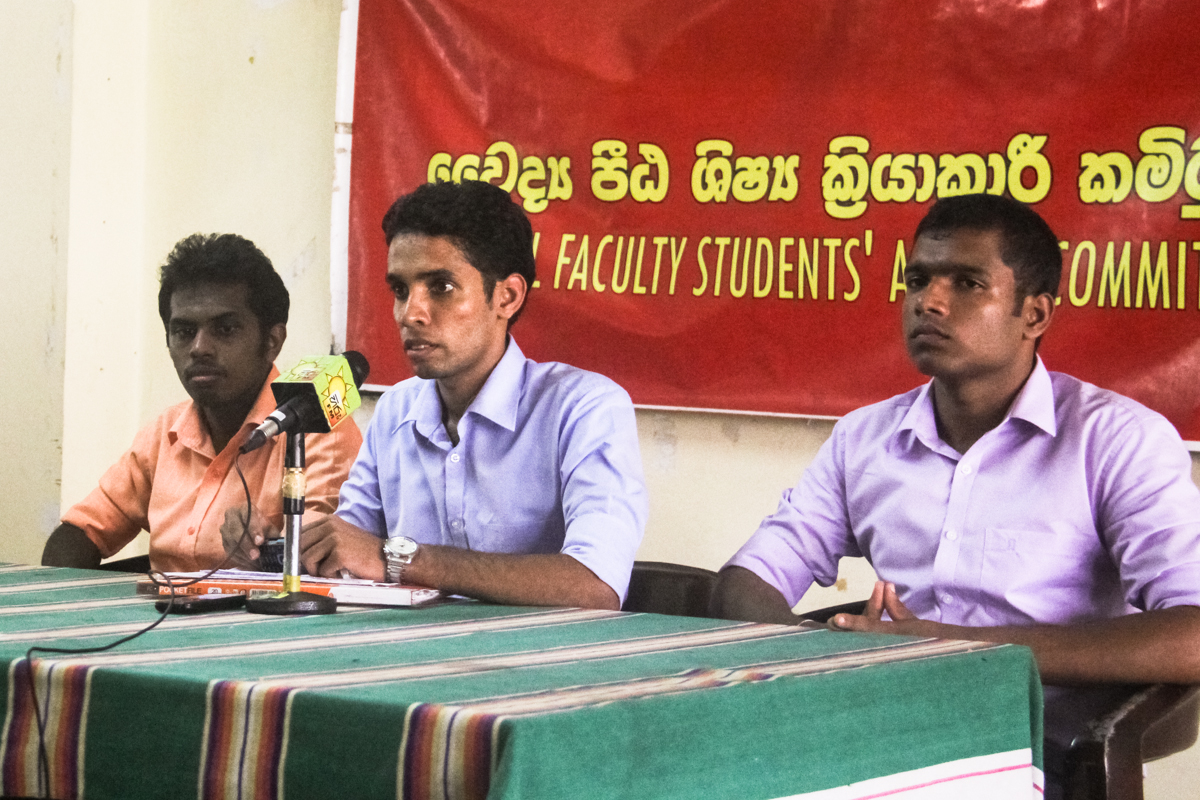 COLOMBO, SRI LANKA — Dilshan Fernando always dreamed of being a doctor, but his exam scores weren’t high enough to earn him a spot at a state-funded medical school.

That was in 2008, when only state-run universities offered medical degrees in Sri Lanka. Fernando says he didn’t want to go abroad for his education, so, out of options, he shelved his dream and enrolled to get a business degree at a local school affiliated with a London-based university.

“The plan was to complete four years in Sri Lanka and finish the fifth year in Russia,” he says. “So we didn’t need accreditation.”

There was more good news in 2011, or so it seemed. The University Grants Commission, the body tasked in Sri Lanka with ensuring quality standards at universities, decreed that SAITM, a private school, could award its own degrees.

Inside the Story: Sri Lanka: ‘The transparency movement in Sri Lanka has failed one giant, crucial group: Ordinary citizens.’

Somewhere along the way, the Right to Information campaign became viewed solely as a journalistic tool rather than a tool available for anyone who wants information. Read more.

This was a major change for Sri Lanka, where free public education has long been revered as a social equalizer.

For Fernando, the change meant that he wouldn’t need to spend a year in Russia. Instead, he says, he planned to complete all of his education in Sri Lanka.

But in 2015, just five months before he was set to graduate, Fernando’s dreams were dashed. The Sri Lanka Medical Council (SLMC), the organization that monitors quality standards for medical schools, withheld SAITM’s compliance certification.

The school didn’t offer its students enough clinical training, the council said in a report presented in August 2015.

Now, Fernando hopes SAITM will get its certification in time for him to graduate this year.

They wanted to go ahead with the plan to establish a private education sector in the country. Ryan Jayalath, convener of the Medical Faculty Students’ Action Committee, referring to the government’s move to accredit private schools without ensuring quality standards

Fernando had every reason to trust that SAITM would offer him a quality education. The school was among a handful that were fully accredited through a controversial policy set in August 2013 by a former minister of education.

The policy created a process for the government to accredit private higher education institutions, separate from the process used by the University Grants Commission to accredit programs at Sri Lanka’s public universities. Government officials say the policy was enacted to provide more options for students who don’t get into the country’s public universities, which only hold 17 percent of qualified students.

But the government has not established a framework to assess the quality of education offered at those newly accredited schools. And there’s no independent supervisory board to which students can file complaints, so students who attend the schools, all of whom have paid tuition in a country long devoted to free education for everyone, have no recourse.

SAITM has operated for six years without an SLMC compliance certificate — part of that time with foreign university affiliations, part of it without. All private institutions that award degrees are required by law to hold compliance certificates with relevant professional bodies. Experts say the caliber of health care in Sri Lanka hangs in the balance as the authorities engage in a tug-of-war regarding quality-control matters in higher education. 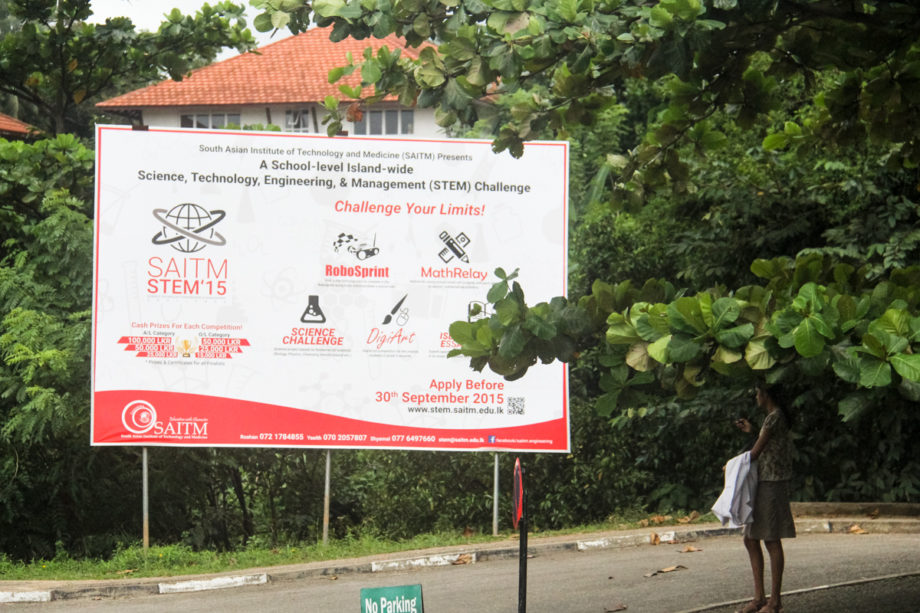 A billboard outside the South Asian Institute of Technology and Medicine in Malabe, Sri Lanka, promotes SAITM STEM ’15, a nationwide competition among students to promote interest in science, technology, engineering and management studies.

Ranepura, who was secretary of the Ministry of Higher Education between January and August 2015, says the ministry hasn’t accredited enough schools to warrant the creation of a quality assurance system. Ranepura was interviewed while he still held the office of ministry secretary.

“We will establish a mechanism later,” he says.

Despite an initial agreement to grant GPJ an interview, Dr. Renuke Sameera Senaratna, the director and dean of administrative affairs of SAITM’s Faculty of Medicine, did not meet a GPJ reporter as scheduled. Follow-up emails were not answered.

Private schools have legally been able to apply for accreditation since 1985, when the government approved a law allowing them to do so through a rigorous process set by the University Grants Commission, the same body that accredits public university programs. But fewer than a dozen schools have been accredited via that process, due to widespread opposition to private universities. There are currently 15 state universities in Sri Lanka.

South Asian Institute of Technology and Medicine (SAITM) has been at the center of controversy since 2013, when it was accredited by the government’s top education officials in an opaque process created to circumvent the standard path to accreditation.

Those changes were all done behind closed doors, and only cursory details were made public. Experts say it’s still not clear why the minister changed the process.

Student advocates accuse the ministry of playing politics, to the detriment of higher education.

“They wanted to go ahead with the plan to establish a private education sector in the country,” says Ryan Jayalath, even if those private schools don’t fulfil the conditions required to complete a degree.

Jayalath is convener of the Medical Faculty Students’ Action Committee, a union formed by the students of all medical faculties in state-run universities.

Choosing a medical school to accredit, even retroactively for previously graduated students, was a way of making a point, Jayalath says.

We will establish a mechanism later.P. Ranepura, who was secretary of the Ministry of Higher Education between January and August 2015, referring to when the government will create a quality-assurance mechanism for the schools it accredits

The government had previously tried to establish a private medical school. Sri Lanka’s first private medical college, North Colombo Medical College, opened in 1981, via an affiliation with University of Colombo, a public university.  Once the 1985 law allowed private schools to establish on their own, North Colombo Medical College severed ties with the University of Colombo to operate independently.

That school was later taken over by the government and converted into a public school, due to pressure from academic and student groups. Even now, that school is often referenced as a failed attempt to establish private schools in Sri Lanka.

SAITM was the first private medical school to open since then, according to the SLMC.

Private schools approved by the ministry offer a quality education, Ranepura says. Every school accredited through the ministry must submit academic and administrative information that the ministry evaluates, he says.

“We can withdraw approval if needed,” he says.

So far, the ministry has not withdrawn approval for any school.

SAITM earned accreditation to award medical degrees from the University Grants Commission in 2011, but the commission noted some conditions: The school needed to provide clinical practice opportunities for its students, either at its own medical facility or at other teaching hospitals. Among other stipulations were upgrades of the library, a lecture hall, a laboratory, IT facilities and other places within six months after the August 2011 approval.

In 2013, after the Ministry of Higher Education established its own accreditation process, it conducted another review of SAITM. The report from that review, which GPJ obtained unofficially, noted that “the attention paid to [the] library was woefully inadequate.”

Experts say the caliber of health care in Sri Lanka hangs in the balance as the authorities engage in a tug-of-war regarding quality-control matters in higher education.

Even so, the ministry retroactively accredited degrees for students who had registered before the 2011 approval.

Medical schools must meet minimal quality standards, says one SLMC member, who spoke on condition of anonymity because that person is not authorized to speak to the media.

The SLMC and other members of the medical profession have been pushing for a formal set of minimum standards for the country’s medical schools for a long time, but a draft bill has been rejected by successive ministers, the SLMC member says.

No means have been established to allow students to submit grievances about private schools. The Quality Assurance and Accreditation Council of the University Grants Commission of Sri Lanka, the only body of its kind, has no authority over private institutions.

But it’s clear that some students aren’t happy with their experiences at SAITM. In 2014, a group of five students from the school sued SAITM and government officials — including the former minister of higher education and Maithripala Sirisena, the former minister of health who is now Sri Lanka’s president — stating they were denied a fundamental right to education because they weren’t able to conduct clinical practice in a government hospital.

The case was withdrawn when the Ministry of Health agreed to give students access to a hospital for clinical training, the SAITM students say. But they say that hasn’t happened, and they’ve pursued further court action.

The SLMC conducted an assessment of SAITM in July, says professor Carlo Fonseka, the SLMC president. But SLMC committee members could not agree on recommendations for quality improvements regarding the school.

Meanwhile, Health Minister Dr. Rajitha Senaratne promised in Sri Lanka’s Parliament that the school won’t be shut down, which some of its detractors have demanded.

Fernando, the student whose dream of a medical career was sidelined because of SAITM’s problems, says he has confidence that Senaratne will keep his word. SAITM’s students should be assessed by the same standards as medical students at state schools, he says, and they should enter the workforce with confidence that they have the needed skills.

“What is needed now is to help us get clinical practice,” he says.