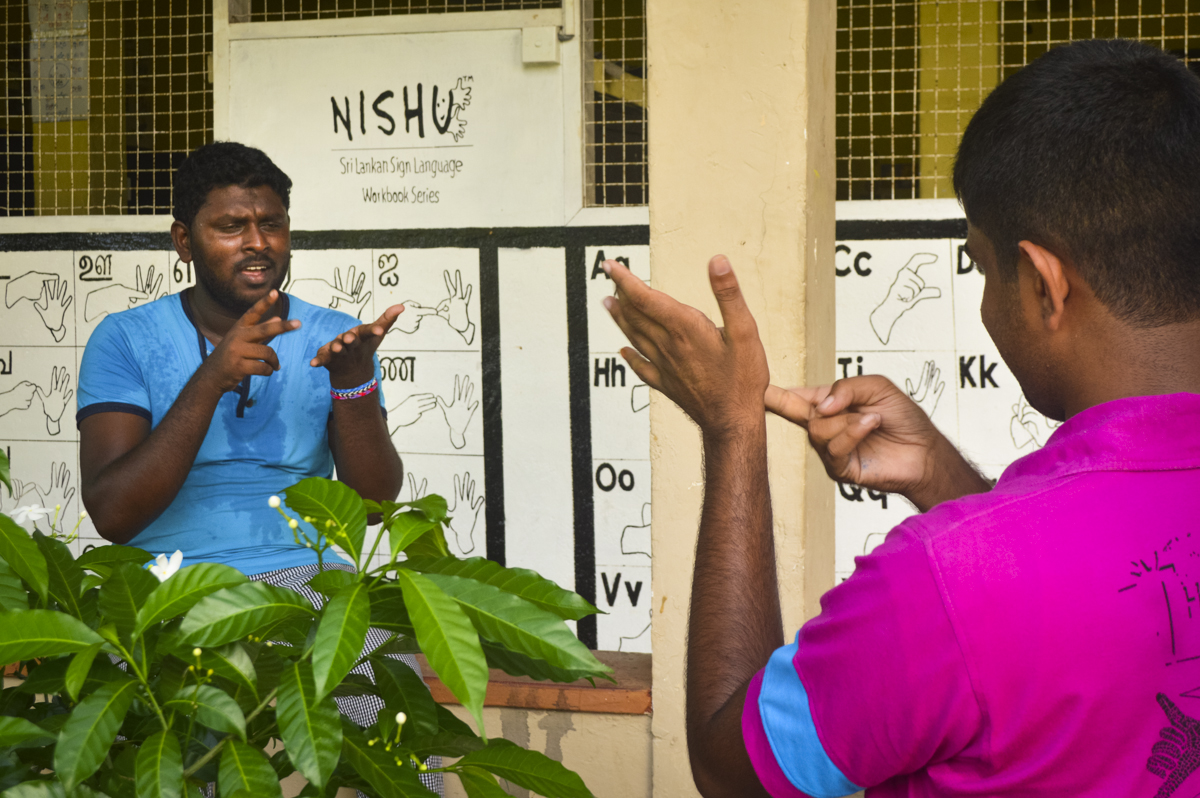 “They don’t talk about sex with me at all,” Akalanka says, via a sign language interpreter.

Parents in Sri Lanka’s conservative culture rarely speak to their children about sex. But for Akalanka, the situation is even harder. He is deaf and can only communicate with his parents through sign language. For years, the only existing sign language for sexual terms were vulgar gestures, and he avoids those, he says.

Everything Akalanka knows about sex came from discussions with his deaf friends, he says. But he knows that information might not be reliable.

“My friends don’t talk about it much and I don’t get much information by talking to them too because they are also in school and don’t get exposed to society and information much,” says Akalanka, who lives and studies at The Ceylon School for the Deaf and Blind in Ratmalana, a suburb of Colombo, Sri Lanka’s commercial capital.

Sex education was taught briefly in a science class, he says, but there wasn’t much discussion. 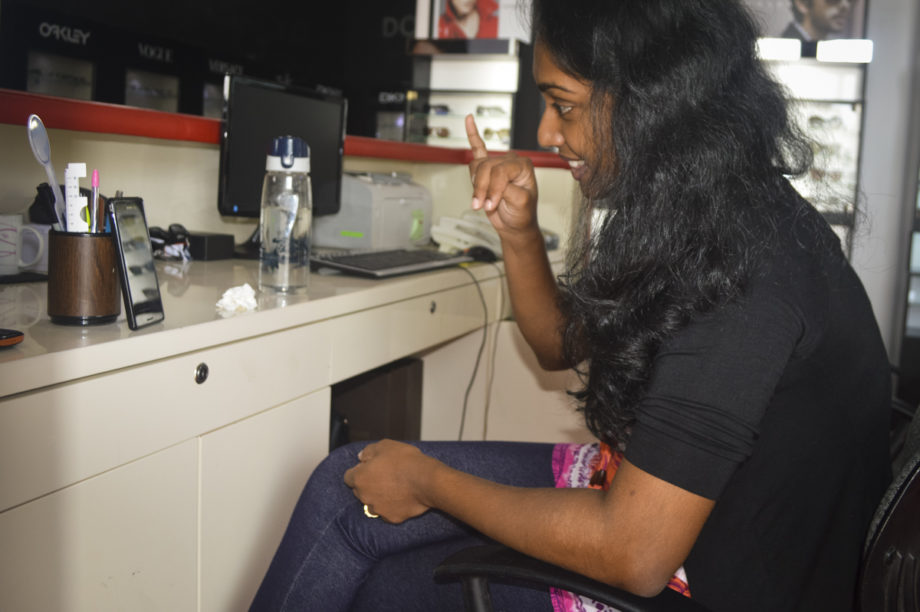 Tharaka Nishamali, 28, chats using sign language via video with a friend. Nishamali, who is deaf, is pictured in the optician and hearing aid shop where she works in Colombo, Sri Lanka.

Deaf adults might have more information, he says, but he hasn’t broached the topic because there aren’t any appropriate signs to use to discuss it.

But there’s good news for Akalanka and others like him in Sri Lanka. A new glossary of more than 230 signs related to sex, sexuality and reproductive health was launched in December, and is expected to improve access to sex education for the deaf and hearing-impaired community in Sri Lanka. The glossary, which includes many new signs as well some already in use, could give deaf and hearing-impaired people a means to report sexual assault and other crimes to authorities.

The Sign Language Glossary on Sexual and Reproductive Health and Rights, was developed by Y PEER Sri Lanka in partnership with the Ministry of Social Empowerment and Welfare and the UNFPA.

The glossary attempts to bridge the gap between deaf youth and sex education, says Dulitha Harsha Jayasekara, who was part of the team which developed the signs in the glossary.

The new signs will be gradually introduced into educational material and included in the government’s sign language teaching curricula.

The glossary will benefit Sri Lanka’s deaf community, says H. P. N. Lakshman, director of the Non-Formal and Special Education Branch at the Ministry of Education.

“There was a need for such a sign language in Sri Lanka,” he says. “The glossary will help to solve a number of issues. For example, even teachers avoided the subject of sex when it had to be taught in class due to lack of correct signs.” 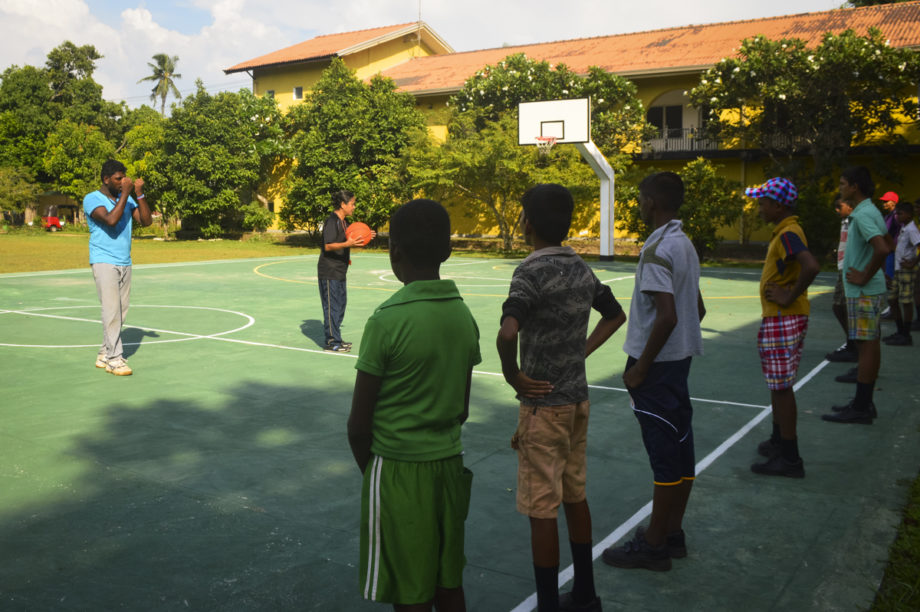 Students at The Ceylon School for the Deaf and Blind in Ratmalana, Sri Lanka watch their teacher Rajith Madushan (in blue shirt) interpret for a basketball coach during practice.

British Sign Language was first taught on the island in 1912, when The Ceylon School for the Deaf and Blind was established, says Chammi Nishara Dias, senior sign language interpreter at the Department of Social Services.

Over time, the language has been modified to include words unique to Sinhala and Tamil, the two dominant languages in the country, she says.

Eventually, sign alphabets for Sinhala and Tamil were developed and various dictionaries of sign language are published by different sources, Dias says. But the Sri Lankan Sign Language is not recognized by the government.

About 2.1 percent of Sri Lankans are hearing impaired, according to Sri Lanka’s 2012 Census of Population and Housing. That’s about 389,000 people.

Jayasekara, 26, says he grew up with a deaf cousin. He completed a sign language course and worked for a while as a call center operator at the National Child Protection Authority (NCPA). Families called the center on behalf of deaf people who had been abused, he says.

“At the NCPA I came across several cases where deaf teen girls were sexually abused but could not say what had happened because they did not know how,” he said.

This is when he got the idea to create a special sign glossary dedicated to creating awareness about sex education, Jayasekara says. He spent about five months in 2015 researching sign language and developing the new glossary, together with colleagues from the Youth Advocacy Network Sri Lanka, where he serves as a volunteer program associate.

Dias, who also interprets in local courts, says she’s seen first-hand the hardships caused by a lack of signs for sexual terms.

“I’m working as an interpreter on a case where a 21-year-old deaf girl was severely raped by four men,” Dias says. “But, since she does not know how to describe what happened the perpetrators are at an advantage.”

Deaf people shy away from talking about anything to do with sex or sexuality because the sign language which exists is vulgar and incomplete, she says.

Often, deaf people have to point to body parts to clarify what they are saying, Dias says. This can be embarrassing in a public situation, and especially traumatic for rape victims, she says.

“It’s like reliving the same event over again,” she says.

Dias says the new sign glossary, for which she was an advisor, will be useful for deaf people who need to clearly communicate about sexual matters for legal purposes.

She also believes that the glossary will open new avenues for discussion and awareness about sex and sexuality among deaf young people in Sri Lanka.

“Sex education is something they do not get exposed to as much as they should,” she says.

Growing up as a deaf teenager, she says her deaf friends were her only source of information on sex.

“When I had a problem regarding sex I always went to my deaf friends,” she says, via a sign language interpreter. “In school, there was no sex education.”

Nishamali, now 28, has been married for seven years. As a married woman, she now feels more comfortable discussing sexual matters with her mother, she says.

But the glossary will help when there are issues that require outside assistance.

“If there is a separate sign language then it will be very easy for deaf people because we can get expert opinions,” she says.

Lalani Jeewanthi, 18, a residential student at The Ceylon School for the Deaf and Blind, says the signs have made a difference already in her health science class.

“These signs are helpful in class,” she says via a sign language interpreter. “Before we did not have a sign for reproduction and now we do.”

They are gradually learning the signs, a few at a time, she says.

Jeewanthi hasn’t started using the signs outside of the classroom yet, as some of her friends still don’t know them.

But eventually she can see that the news signs will become part of the overall sign language that she and her classmates use on a daily basis, Jeewanthi says. It won’t be limited to their classroom.

Teachers of deaf students are also encouraged by the new glossary.

Christopher Delmar is a senior sign language teacher at the school and served on the advisory panel for the new glossary. He has started gradually introducing the new signs into discussions with students and adults.

“Even young teachers find it hard to communicate about sex with their students because there aren’t proper signs,” he says.

Delmar is also a volunteer marriage counselor. He says he plans to use the glossary in that work, as well.

“Some of the issues that deaf couples face are minor,” he says. “If they could communicate, then they are not issues at all.”