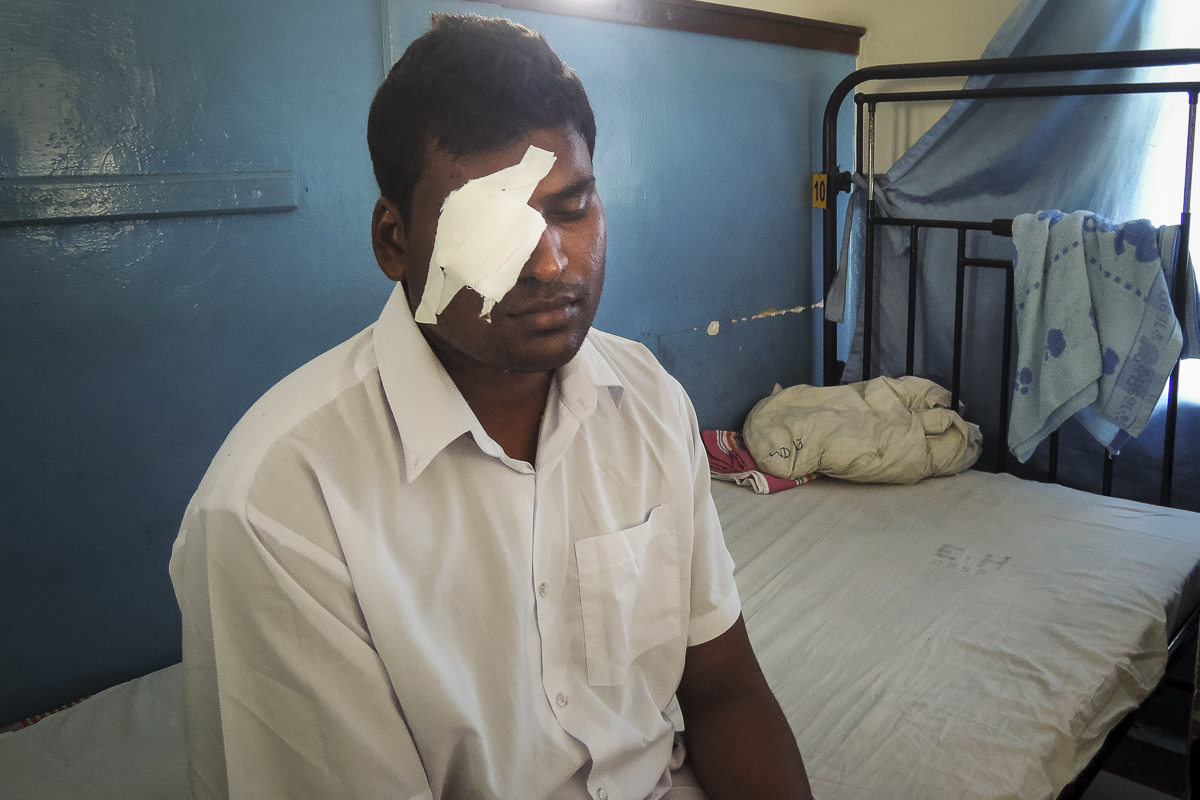 COLOMBO, SRI LANKA — Amila Nilanga battled for a decade with corneal blindness in his right eye. But now, at 28 years old, his vision is fully restored, thanks to a cornea transplant.

Nilanga waited on the transplant list for about three months before his surgery, but that wasn’t for a lack of a cornea. Due to a high rate of donations, Sri Lankans rarely have to wait for a cornea. In fact, the country exports all excess corneas and is a leading supplier of corneas to the world.

Instead, Nilanga, an electrical engineer, waited for his surgeon’s schedule at the state-run National Eye Hospital of Sri Lanka in Colombo to clear.

“It’s only a tissue, but I feel grateful to the donor,” he says. “This is a pious deed indeed. What can one do without sight?”

Sri Lanka, one of the world’s leading providers of corneas, has donated excess corneas to foreign patients for decades. The Buddhist practice of giving alms, especially donating a part of yourself to another, motivates many Sri Lankans to register to donate their eyes after they die. More than 1 million Sri Lankans are currently registered as eye donors.

The culture of eye donation in this island nation was pioneered by Dr. Hudson Silva, when, as a medical student in 1958, he wrote a newspaper article in which he called on Sri Lankans to donate their eyes.

The preparation and preservation of corneas is done within four hours, as in Sri Lanka, being a tropical country, decay sets in very fast. Janath Matara Arachchi, senior manager of the International Eye Bank

Silva garnered the support of Buddhist clergy in spreading his message, and the donation of one’s eyes was seen as a meritorious act, says Dr. M.H.S. Cassim, the medical director of the Sri Lanka Eye Donation Society, which Silva established as the Ceylon Eye Donation Society.

Stories of Buddha donating his blood and flesh in various incarnations have popularized the donation of blood, corneas and tissue in Sri Lanka.

When the Sri Lanka Eye Donation Society created the International Eye Bank in 1961, Silva was the first donor to register. His mother was the second, and when she died in 1963, he grafted her corneas to a farmer and restored his sight. That story convinced thousands of Sri Lankans to register with the society.

By the early 1960s, the country had more corneas than it needed, so Silva offered the excess to foreign hospitals. The first six corneas that were donated to a foreign hospital were carried by Silva in a thermos to Singapore in May 1964, on Vesak Day, which commemorates the birth, death and enlightenment of Buddha.

Although the majority of registered donors are Buddhists, Sri Lankans of all faiths are registered, Cassim says.

Between 1961 and mid-August 2016, the Sri Lanka Eye Donation Society provided 47,850 corneas to Sri Lankans and 73,085 corneas to people in 57 other countries. In addition, nearly 4,000 pairs of eyes, which did not have corneas suitable for transplant, were supplied for local and international research. There are now more than 1.3 million Sri Lankans registered with the society.

The National Eye Bank of Sri Lanka, which was set up in 2011 through a collaboration between the governments of Sri Lanka and Singapore, had donated more than 6,000 corneas to local and foreign recipients as of mid-August 2016. Both organizations provide the corneas free of charge, and foreign hospitals only pay export fees. The eye bank has 6,000 donors on its rolls.

Sri Lanka’s cornea supply is unusual. A global survey carried out in 2012 and 2013 by the U.S.-based National Institutes of Health revealed a lack of corneas around the world, with just one cornea available for every 70 needed. About 53 percent of the world’s population has no access to corneal transplantation, the report revealed.

Appeals for corneas reach the Sri Lanka Eye Donation Society and the National Eye Bank on a regular basis.

Dr. Priyani Dissanayake, a Sri Lankan now working with the Ministry of Health in Swaziland, lodged a formal request for corneas during a visit to Sri Lanka in August.

A large number of people between the ages of 20 and 30 in Swaziland are affected by a genetic disorder called keratoconus, which affects vision, Dissanayake says. Efforts to obtain corneas from other African countries were unsuccessful, she says.

“Since I am familiar with Sri Lankan culture and the donor programs, I am on a mission to request corneas from the National Eye Bank of Sri Lanka,” she says.

And Sri Lanka’s cornea supply shows no signs of shrinking. 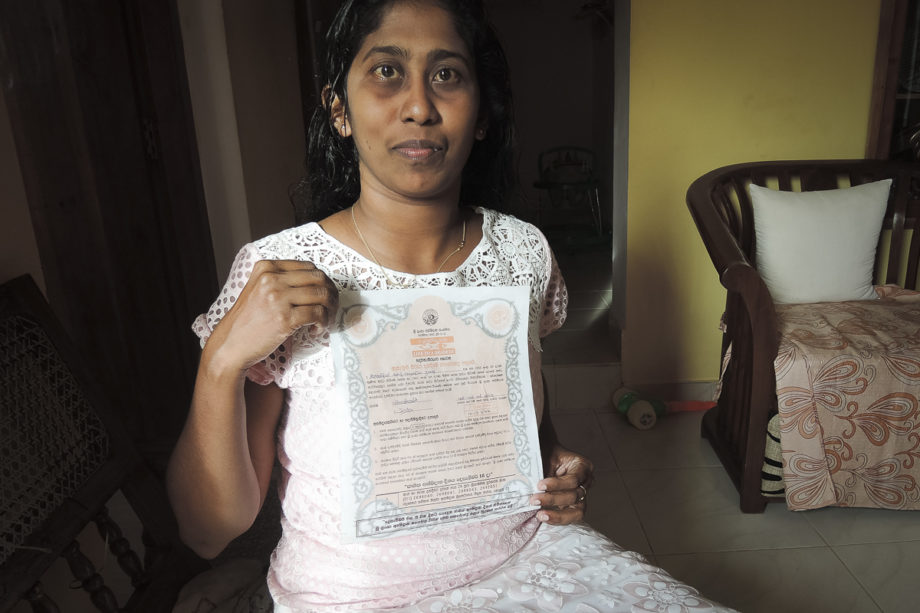 Kaushalya Fernando shows a certificate noting that she has registered to donate an eye. Fernando is among 1.3 million Sri Lankans registered with the Sri Lanka Eye Donation Society.

Kaushalya Fernando is registered as a donor with the Sri Lanka Eye Donation Society.

“I was always keen in donating my eyes and my body to the medical faculty for the advancement of medical science,” says Fernando, 34.

She signed up to be a donor in June 2012, and she is registered to donate skin and other tissue as well.

She says her Buddhist faith prompted her to do so.

Fernando even corrected a squint in her eye, undergoing surgery in February, to ensure that upon death, she would donate a good pair of eyes, she says.

“When we offer alms, it has to be of good quality,” she says.

In addition to the registered donors, the Sri Lanka Eye Donation Society and the National Eye Bank work through the hospitals and doctors to encourage families to donate the eyes of a family member.

“The hospitals inform us when a death occurs, and we send a representative to meet with the family to obtain their permission and evaluate the eyes,” says Janath Matara Arachchi, senior manager of the International Eye Bank. 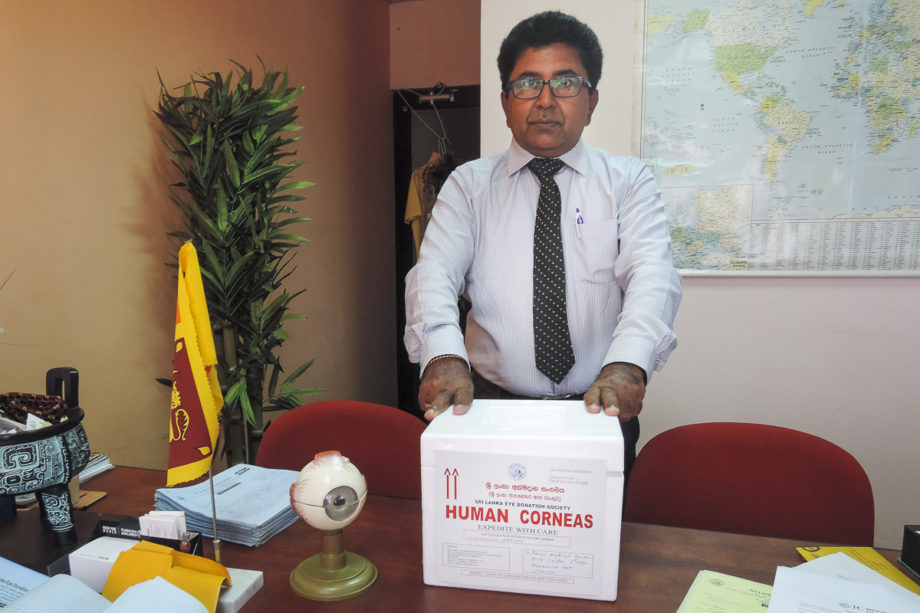 Janath Matara Arachchi, of the Sri Lanka Eye Donation Society, holds a package of corneas, ready for export. Since 1961, the society has provided 47,850 corneas to Sri Lankans and 73,085 corneas to people in 57 other countries.

Since a cornea has to be transplanted within 14 days of its removal, the process moves quickly. The cornea is evaluated for quality, and tests are conducted to ensure that it’s not infected.

“The preparation and preservation of corneas is done within four hours, as in Sri Lanka, being a tropical country, decay sets in very fast,” Matara Arachchi says.

Removing and storing corneas is not a cheap process, says Fazna Ajward, a deputy manager at the National Eye Bank.

From procurement to preservation and transplant, the cost is around 35,000 rupees ($240) per cornea, she says. This cost is currently borne by the Singapore government.

The Sri Lanka Eye Donation Society, as a charity, depends completely on donations. It receives an average of about 450 corneas each month through next-of-kin donations and registered donors.

Kanchana Sandamali Adikari donated her husband’s eyes in 2015 after he died of pneumonia and a representative of the Sri Lanka Eye Donation Society contacted her.

“I gave permission for the removal of eyes, as it was an act of merit,” Adikari, 31, says.

Since then, she and her sister, Nimali Adikari, have registered as donors with the society.

“At first, we felt that since both of us have weak eyes and wear spectacles, we would be rejected,” Nimali Adikari, 33, says. “But then we came to understand that it’s the cornea that’s vital.”

“We are in the process of developing a corneal research laboratory, so that corneas that are not considered to be of high standard could be used for research,” says Ajward, the National Eye Bank deputy manager.