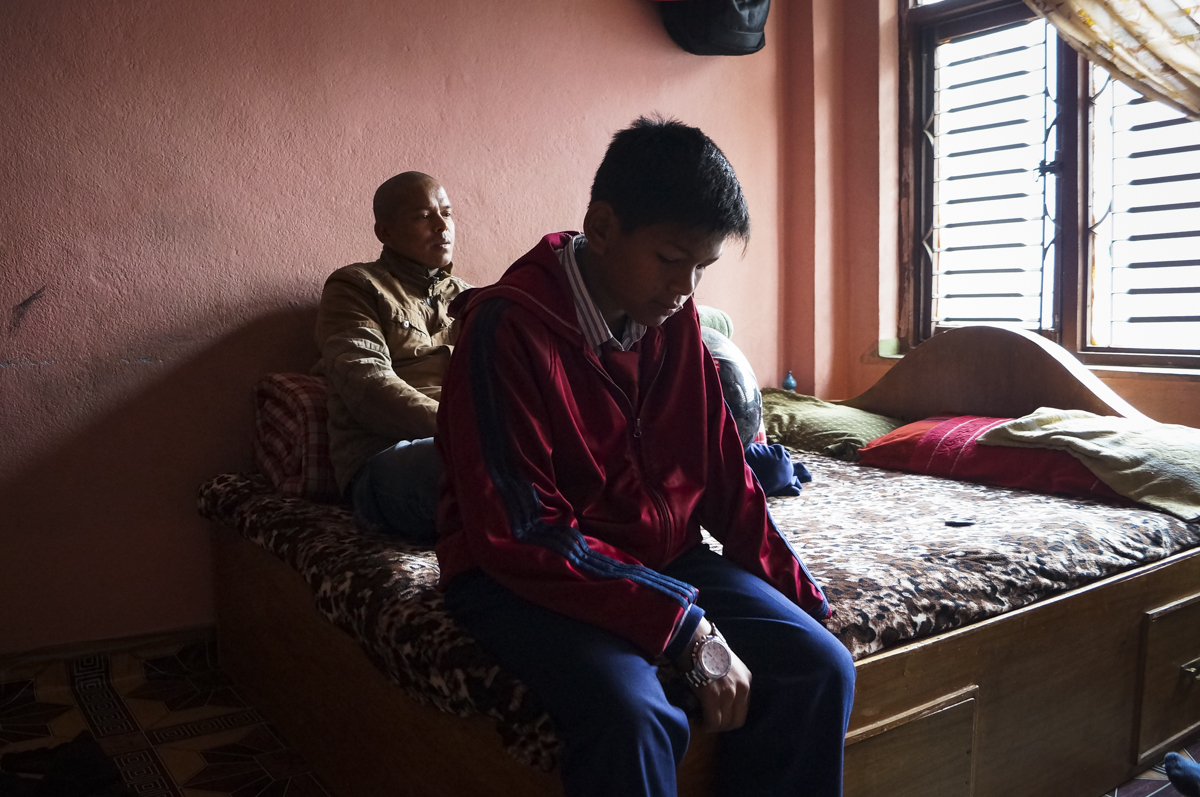 KATHMANDU, NEPAL — It’s been a year since nearly 9,000 people died in the April 25 earthquake and its aftershocks but for many of the friends and family members left behind, the trauma could continue for years.

Karuna Kunwar, a psychologist at the Centre for Mental Health and Counselling-Nepal, says survivors suffer from depression, anxiety attacks, anger and uncontrollable crying.

Even so, Kunwar says, people in this mountainous country find consolation in the fact that the earthquake was beyond their control.

Nepalese culture teaches people to bear with the problems that can take place at any time in life, she says.

“Nepali people have a capacity to cope with natural disaster,” Kunwar says.

GPJ reporter Yam Kumari Kandel spoke with survivors as their loved ones were cremated at Pashupatinath Temple just after the quake. (Read that story here.)

Kandel again interviewed the families she met at the temple last year. Here are their stories:

“That Sinful Earthquake Crushed My Two Children to Death” 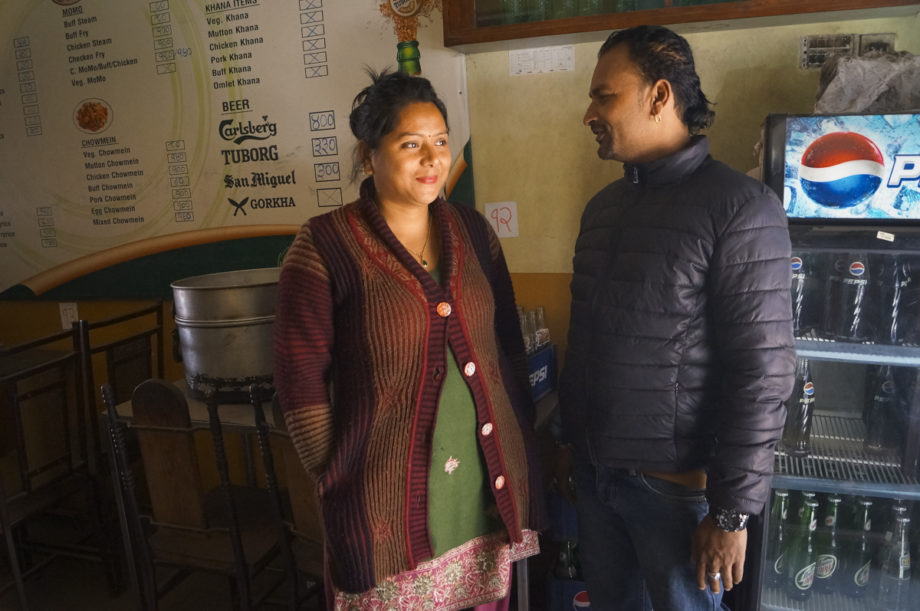 Sanu Bhandari (left) lost two of her three children in the earthquake. Now, she cries uncontrollably and without warning. Her husband, Kamal Bahadur Bhandari, says he tries to find ways to make his wife forget her sorrow by taking her outside the home. Here, the couple visits a small café for breakfast.

His sister-in-law, who was trying to bring the children out of the house, and his niece also died with them.

“I still do not believe that I do not have my children on this earth,” Bhandari, 35, says with tears in his eyes. “I feel like they are playing somewhere around the house. They try to embrace me immediately after they come home.”

Even though he saw his children’s bodies and carried out their funeral rituals, he says he cannot fully believe they are dead. He says he often senses their presence and frequently dreams of them.

“I cannot forget that black day,” he says. “I feel like I am unconscious at times. That sinful earthquake crushed my two children to death. The gods are so cruel.”

Bhandari says he received 140,000 rupees (about $1,312) from the government to carry out funeral rites for his children. Those rituals have taken place throughout the past year, and the most recent occurred in the first two weeks of January in Bhandari’s hometown in Sarlahi district, near Nepal’s border with India. He says he plans to conduct additional rituals on the first anniversary of the earthquake.

Bhandari says his wife, Sanu, has not recovered from the shock of losing two children. And the couple’s surviving child, 14-year-old Samiksha, is also traumatized, Bhandari says. A student at Mercy Academy in Kathmandu, Samiksha never speaks of her younger siblings. 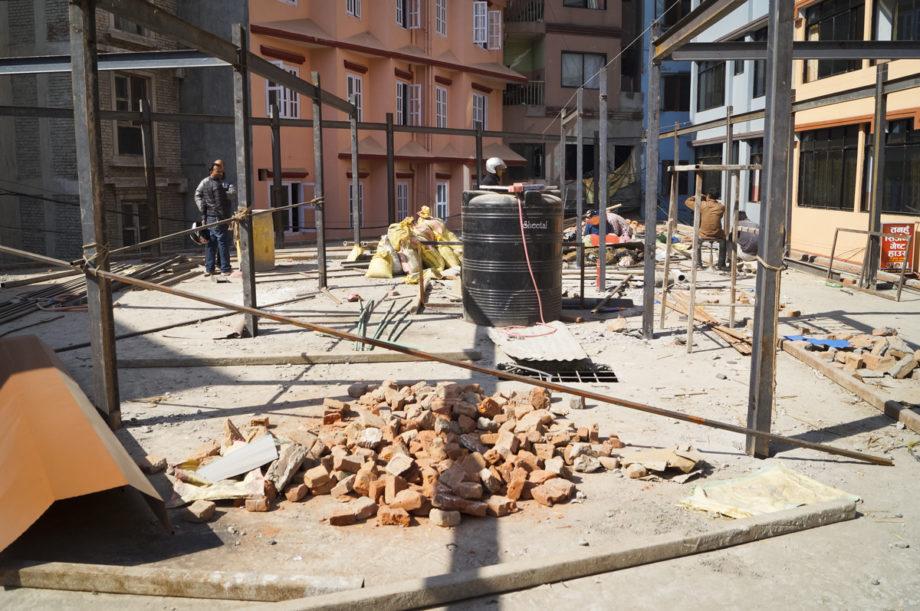 The building where Kamal Bahadur Bhandari lived and operated a guesthouse, and where his two children died in the earthquake, is being rebuilt. The previous building had seven floors, but the new one will only have two floors.

The family lives together in two rented rooms in Kathmandu. Before the earthquake, they lived in a section of a tourist guesthouse that Bhandari ran with his brother. But the rented building where they operated the guesthouse collapsed in the quake, leading to a loss of around 1 million rupees ($9,371), Bhandari says. A bank loan of 1 million rupees ($9,371), taken out before the earthquake, remains unpaid and is a huge financial burden, he says.

Bhandari wants to reopen the guesthouse, but until then he earns a living by driving a taxi. He earns about 1,500 rupees (about $14) each day, he says.

The family’s only consolation, Bhandari says, is to remember that they’re one among many families that lost loved ones that day.

“My Eyes Are Always Desperate to See Them” 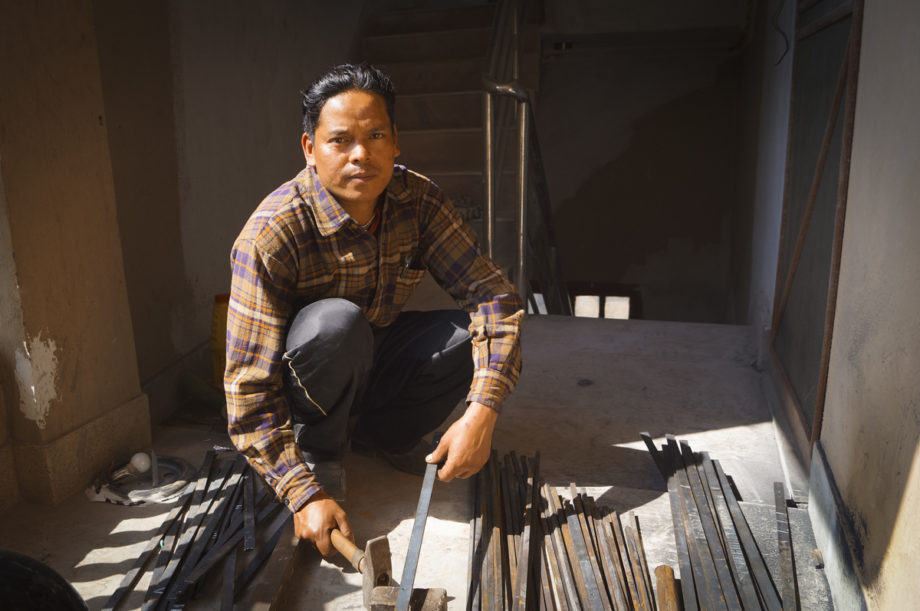 Rajan Bosel lost his wife and two sons when they were buried under collapsing buildings in Kathmandu. He has since remarried and works as a blacksmith to support his family.

Rajan Bosel’s wife and two of his three sons, 8-year-old Pawan and 3-year-old Prawesh, all died in the earthquake. They were in Bosel’s fabric shop in the Gongabu area of Kathmandu. A neighboring building collapsed on them, killing them instantly.

The younger boy was found 11 days after the earthquake. He was clasped in his mother’s arms, under the rubble of the building.

“It is now nearly a year of not seeing my sons and wife,” Bosel says. “My eyes are always desperate to see them. I feel that I would be satisfied to see them in my dreams. But I have not dreamed of them yet.”

In December, Bosel, 38, remarried. He lives in a rented room in Kathmandu with his second wife, Dipa, 24, her 6-year-old daughter, Sonneya, and his surviving son, 13-year-old Prabhash.

“I got married, as it makes my life as well as my son’s upbringing and education easier,” he says. 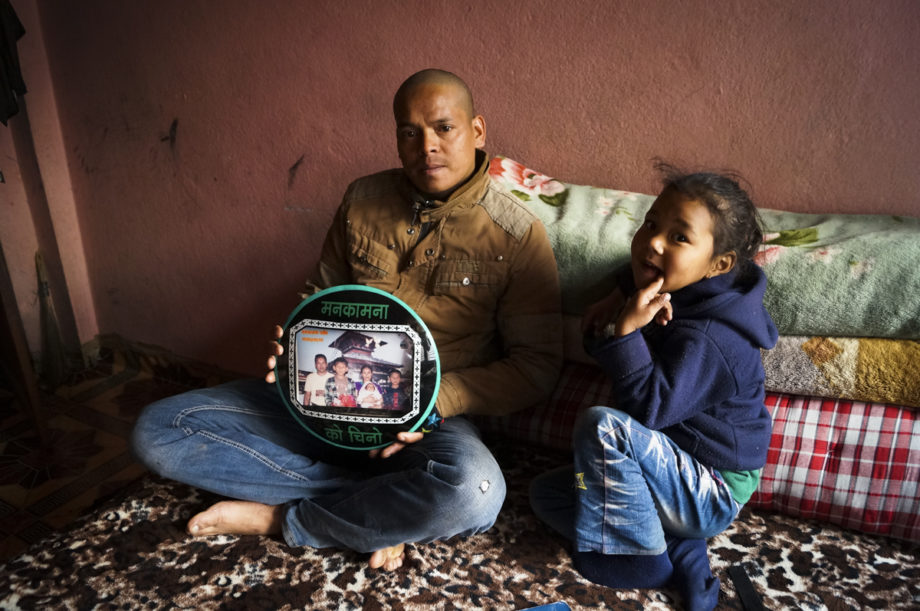 Rajan Bosel holds a photograph of his family before the earthquake. He says he’s trying to focus on building a new life with his 13-year-old son, his new wife and her 6-year-old daughter, Sonneya, shown here with him.

Bosel says he’s tried to communicate with his former wife through a Hindu priest who claimed to have power to speak to the dead. Speaking through the priest, his wife told him that their sons Pawan and Prawesh were together and asked him to provide a better education for their surviving son.

Bosel’s business survived the earthquake, but he says he couldn’t continue operating it after his wife died. He gave his brother the shop, and now works as a blacksmith.

“The stamina also does not come when the children aren’t there,” Bosel says.

Bosel plans to donate stationery items to schoolchildren in April, in memory of his wife and children. He has been saving 2,000 rupees ($18.74) every month for this donation. He believes the donation might open the door of heaven for his wife and sons.

“The government cannot bear the wound of the heart,” Bosel says. “The government can provide relief to the earthquake victims who lose their property by building their house and providing income generating opportunities for them.”

The pain of losing loved ones is something that families must bear by themselves, Bosel says.

“I Usually See My Husband in My Dreams.”

Bimala B.K. was 16 years old when her husband died. He’d been scheduled to fly to Qatar to work a construction job, but his flight was delayed, so he was in Kathmandu the day of the earthquake.

The house where he stayed collapsed on top of him.

B.K. was three months pregnant then and had a 10-month-old infant. Now, she struggles to survive in the Salyan district in midwestern Nepal.

She says she doesn’t have enough basic food for her children. The family begs for rice and green leaves.

“How can I expect to breastfeed properly without having myself sufficient food?” B.K. said in a phone interview. “If I eat properly, then it’s only possible to feed my baby. My kids are so thin and weak.”

B.K. says she struggles to find shelter and clothing, too. Even salt and oil are at times out of reach.

“Sometimes I could only have food if someone offers cooked food,” she says.

“I often see my husband in dreams,” she says. “He tells me in the dreams to take better care of the children. He tells me to send them to school. I am alone. What can I do? Nobody cares about me. I do not want to get married again. I console myself by looking at the faces of my children.”

Sagar Ghimire, GPJ, translated portions of this article from Nepali.