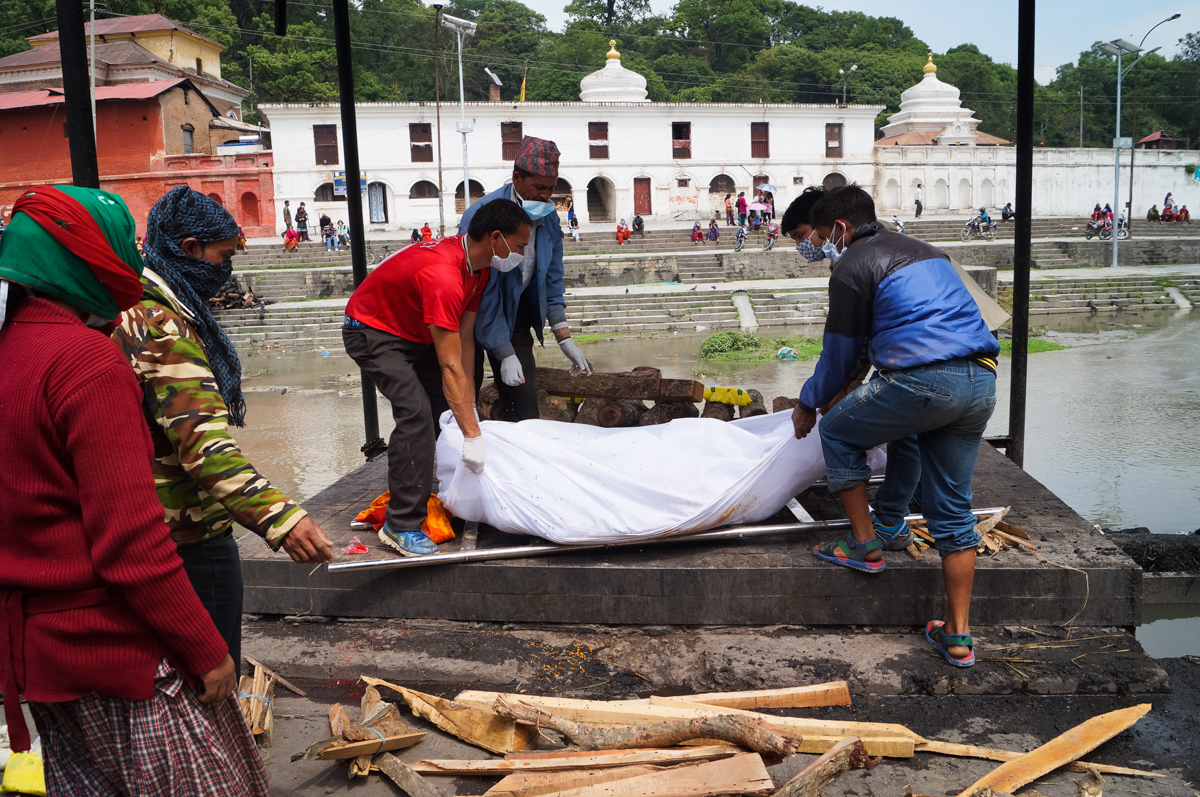 KATHMANDU, NEPAL  ̶  For centuries, Hindus have trekked to Pashupatinath Temple, on the banks of the Bagmati River on the outskirts of Nepal’s capital, to worship. The faithful sing hymns praising the god Pashupatinath.

But ever since the April 25 earthquake claimed the lives of about 8,000 people, according to Nepal’s Ministry of Information and Communication, the temple area has become a place of mourning and cremation. Dead bodies lie everywhere. Smoke pours from funeral pyres.

The 7.8-magnitude quake badly damaged 10 of Nepal’s 75 districts, including Sindhupalchowk, Kathmandu, Nuwakot, Dhading, Rasuwa, Gorkha, Kavre and Bhaktapur, according to the communication ministry.

The Pashupati Area Development Trust is providing free cremation services to families of people who died in the earthquake. The trust usually charges 1,500 rupees ($15) for a cremation.

As of May 12, nearly 600 quake victims had been cremated at the temple grounds in accordance with Hindu custom.

“The crying and suffering of people who have lost their near ones have turned the entire Pashupatinath area into a cremation ground,” he says.

Bimala B.K., 16, cries loudly as she breastfeeds her 10-month-old child. Her husband, Suk Lal B.K., died in the earthquake. He was 18. Bimala is three months pregnant.

Suk Lal B.K. was scheduled to fly to Qatar on April 17 for a construction job. When his flight was canceled, he stayed on in Kathmandu to await a rescheduled flight. He was staying in a house that collapsed in the earthquake.

Bimala was at home in the Salyan district when she learned of her husband’s death. She rushed to Kathmandu for his funeral rites.

“I had dreamed of sending my children to boarding school,” she says, tears rolling down her cheeks. “The earthquake wrecked it all. What can I do now?”

“How do I give birth to this child?” she says. “My first child hasn’t become a year old. How would I raise them? Oh, God, what do I do now? What sin did I commit that I have to live through these days?”

Suk Lak had promised his wife he would send money home from Qatar.

“He had told me to take care of our son and the child that is growing inside me,” she says.

Suk Lal’s maternal uncle, Khumraj B.K., 50, and aunt, Kamala B.K., 46, also came to Kathmandu from Salyan for his last rites. Suk Lal’s neighbors from his temporary stay in Kathmandu came to his funeral as well.

On a bank of the Bagmati River, Suk Lal B.K.’s father, Krishna B.K., 42, pulls his son’s plastic-wrapped decomposing body from a heap of bodies. He starts to cry.

“I cannot believe that my son is dead,” Krishna B.K. says. “I could bear if he had lost his limbs. I should have died in the earthquake instead of him. Oh, God! What do I do now? Where to go? Whom to remember?”

“He was the eldest son,” Krishna B.K. says. “He was the only one who earned. We could eat two meals from his earnings. Now, who would earn for us?”

Suk Lal B.K. farmed rice and vegetables, and worked in construction to support his family.

Krishna B.K. says his other two sons are young. He despairs: Whom will he call his eldest?

“We are illiterate,” he says. “We were all dependent on him. Oh, God! Why did you become so merciless?” 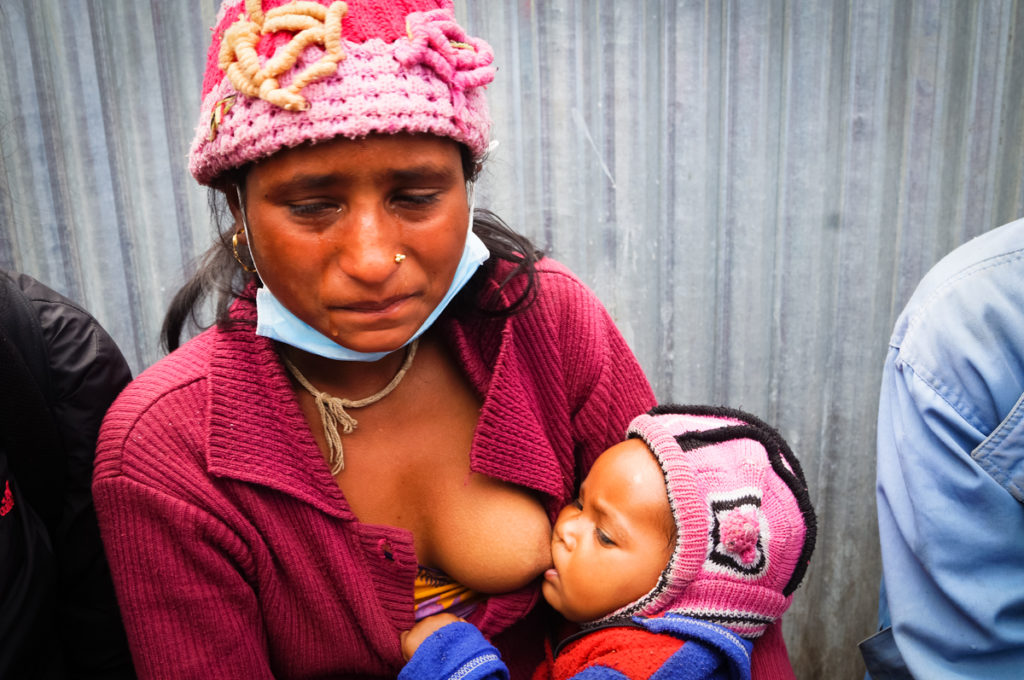 Bimala B.K., 16, who was widowed in the April 25 earthquake, breastfeeds her 10-month-old baby. Three months pregnant, Bimala B.K. came to Kathmandu from the Salyan district for the funeral rite of her husband, Suk Lal B.K., who was staying in Kathmandu when the quake ended his life. 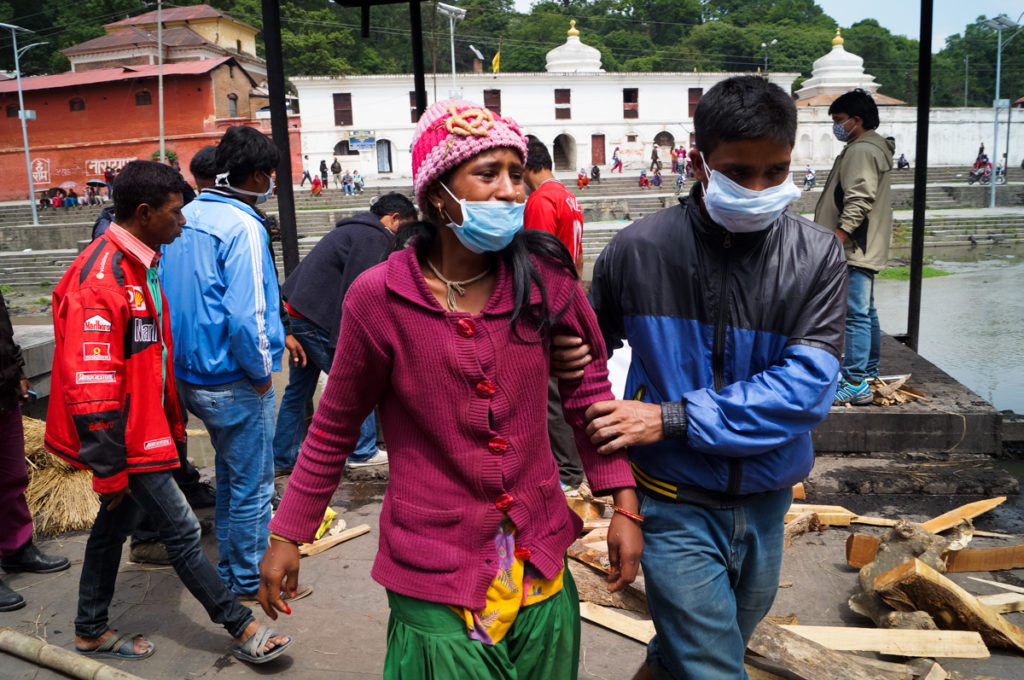 Bimala B.K., 16, is overcome by grief at the funeral pyre of her husband, Suk Lal B.K., 18. The two were united in an arranged marriage two years ago. 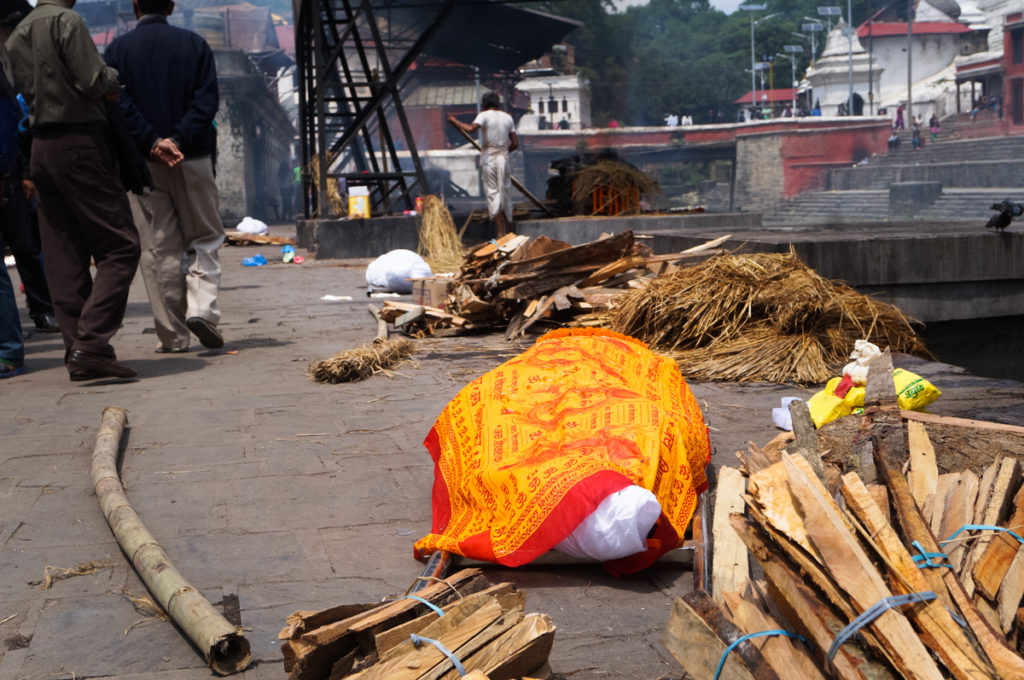 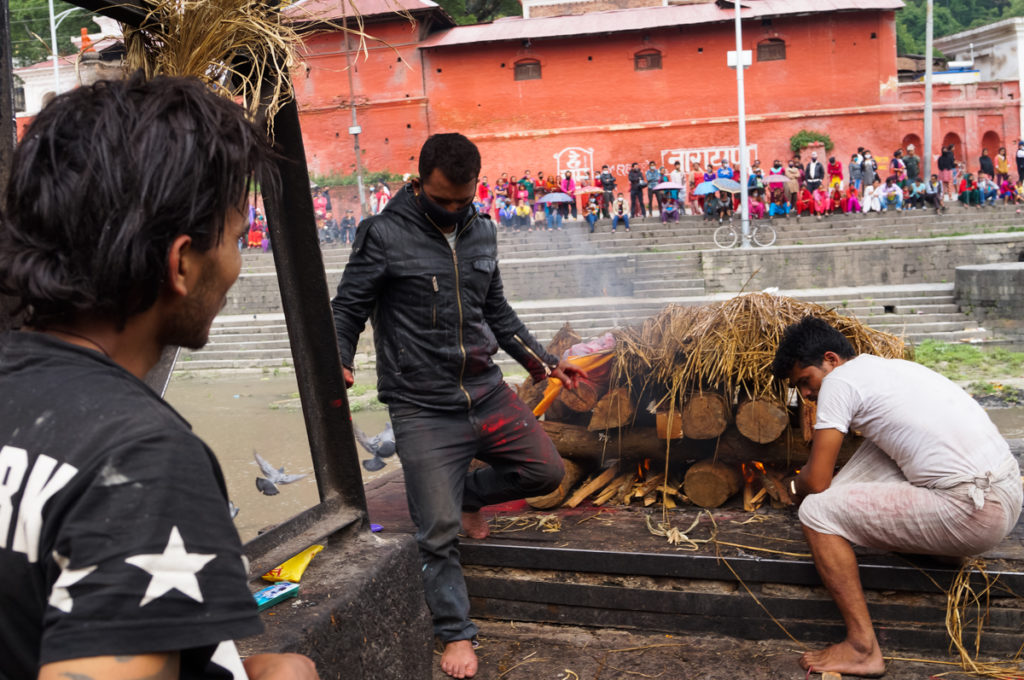 Arjun Bhandari (center), 33, and Bimal Khadka (left), 30, prepare to cremate their 8-year-old nephew, Supreme Bhandari, at Pashupatinath Temple with the assistance of a temple worker (right). 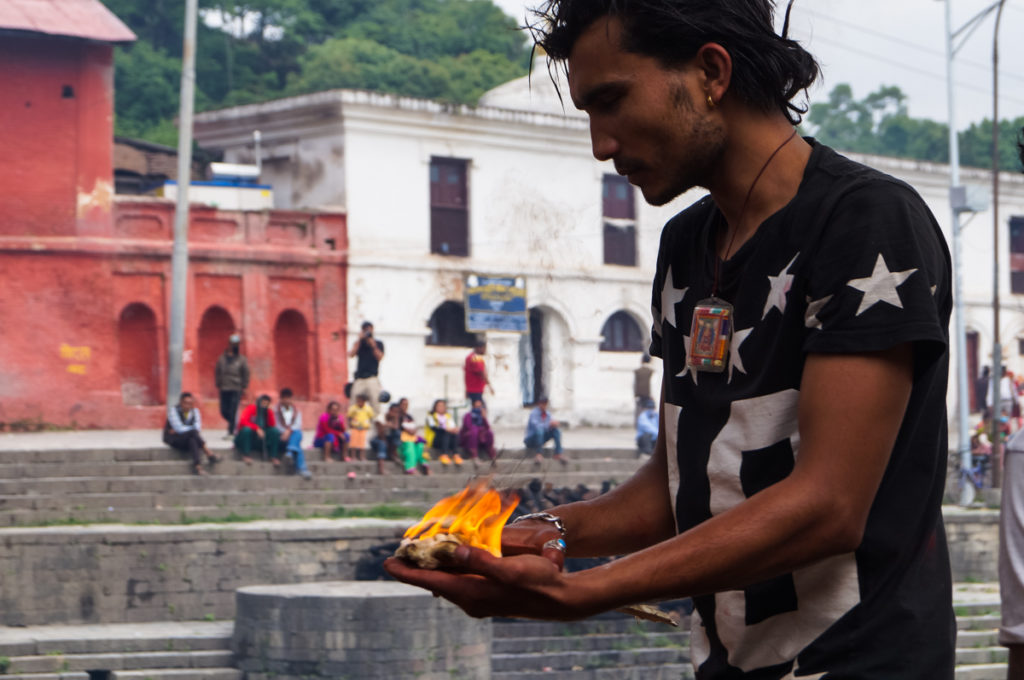 Bimal Khadka, 30, prepares to light the funeral pyre of his nephew, Supreme Bhandari, in accordance with Hindu custom. 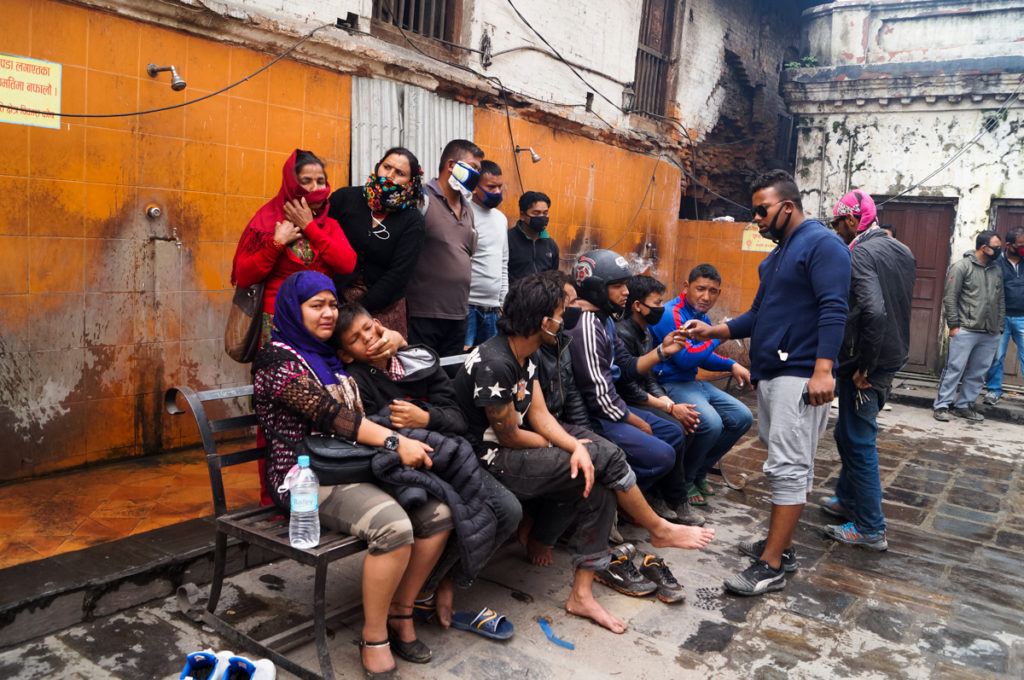 Relatives of 8-year-old Pawan Bosel gather at Pashupatinath Temple for his funeral. 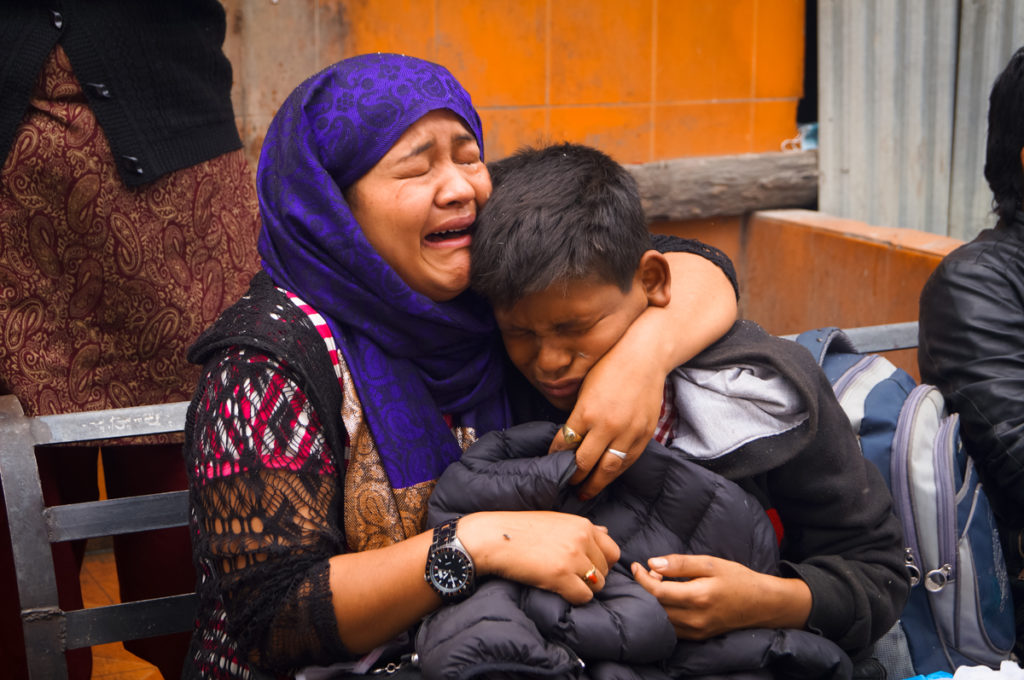 Asmita Thapa and her cousin Prabhash, 12, mourn the death of Prabhash’s brother Pawan. The family cremated Prabhash’s youngest brother, Prawesh Bosel, 3, at the temple on April 27. 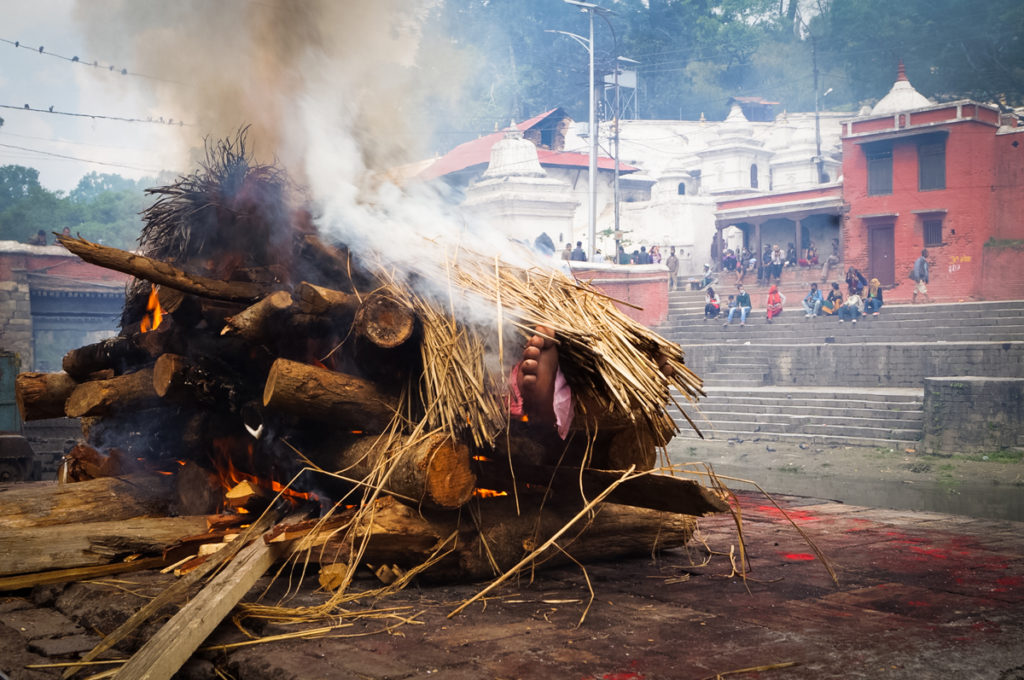 An earthquake victim is cremated on a funeral pyre at Pashupatinath Temple in Kathmandu. 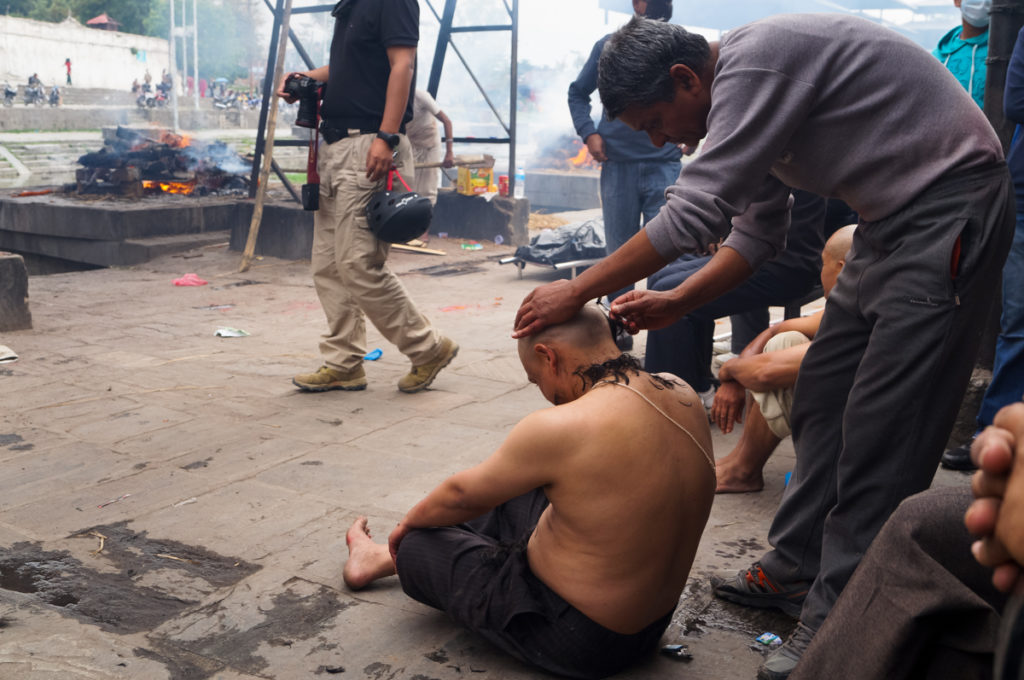 After a cremation, a son of someone who died in the April 25 earthquake has his hair cut – a Hindu custom carried out in observation of a death. Sons of the dead perform sacred rituals for 13 days. 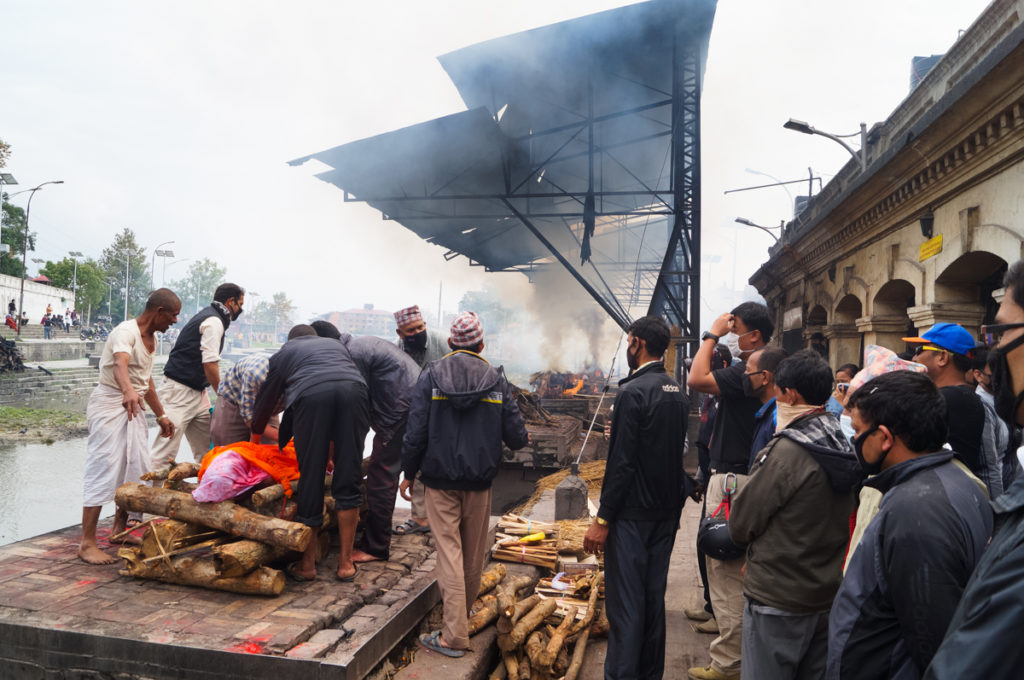 Male earthquake survivors wait their turn to cremate the bodies of loved ones. According to Hindu custom, women may help prepare bodies for the funeral rite, but only men attend cremations. 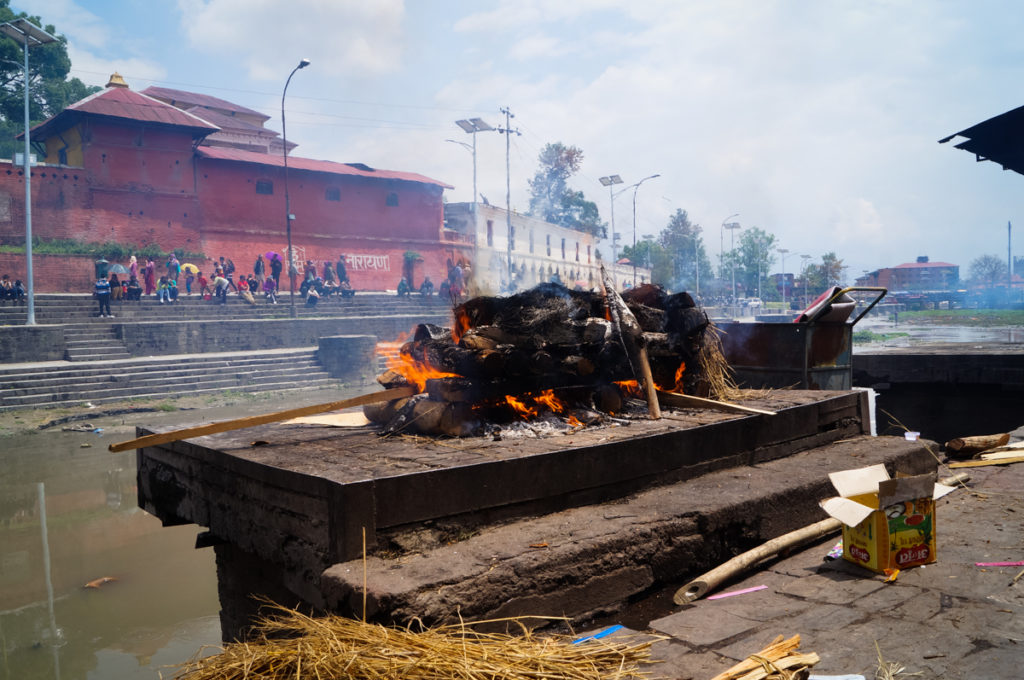 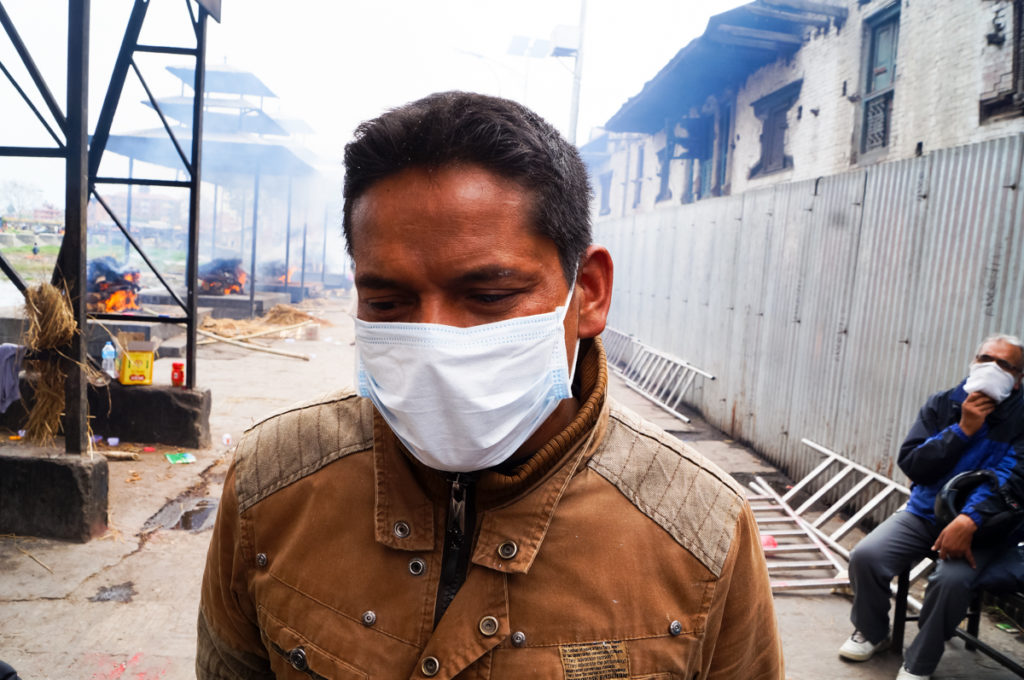 Rajan Bosel, 40, lost his wife, Amrita Bosel, 36, and two sons, Pawan Bosel, 8, and Prawesh Bosel, 3, in the April 25 earthquake. Rajan Bosel says he consoles himself with the knowledge that thousands of his fellow Nepalese are also grieving terrible losses. 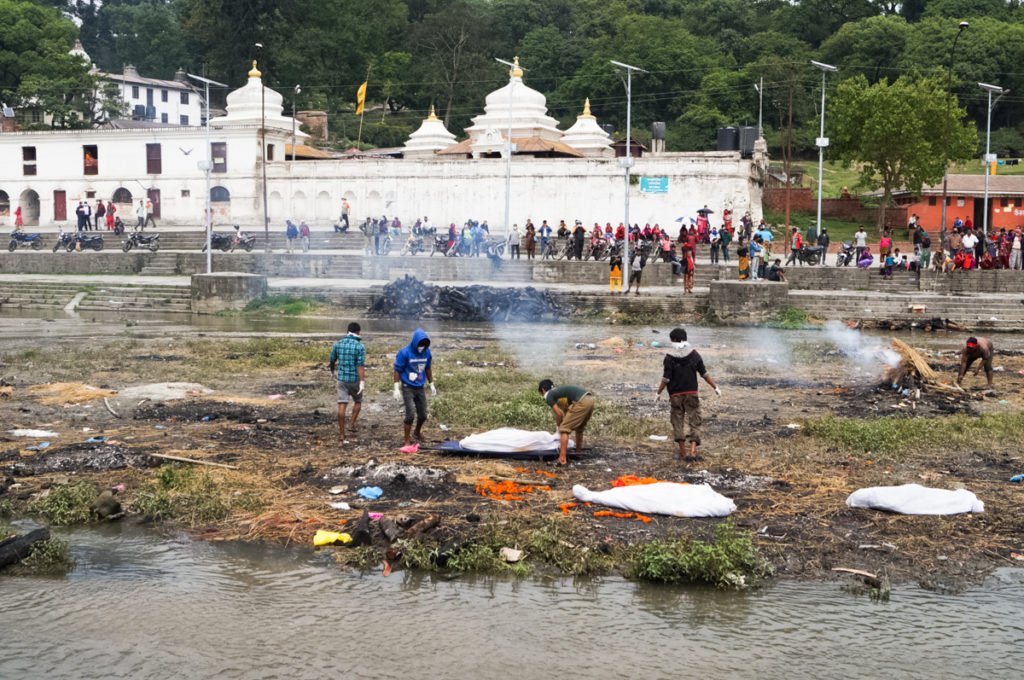 Survivors of the April 25 earthquake bring the dead to the grounds of Pashupatinath Temple in Kathmandu for cremation. The Pashupati Area Development Trust cremated quake victims whose families were not identified.

Supreme Bhandari was 8 years old. His sister, Subechchha Bhandari, was 9. Both died in the earthquake, says their father, Kamal Bahadur Bhandari, 35.

Subechchha’s body was cremated the day of the quake. Supreme was unconscious but alive for 72 hours in the rubble of the building that collapsed on him; a doctor on site confirmed that he died an hour before he was rescued, Kamal Bahadur Bhandari says.

On the day of the earthquake, a Saturday, the family went to the home of the children’s mother’s family to share a meal.

“But, the earthquake ate my family,” Kamal Bhandari says.  “The earthquake is like a monster that eats people.”

Pain and rage show in his eyes as he fights back tears.

Kamal Bhandari says he must harden his heart to bear the loss.

“My young nephew!” Khadka says. “He used to come to our house and say ‘My uncle’s house!’ getting excited. He died in my house. I feel like I am a criminal, as he died when my house collapsed.”

Survivors of Pawan Bosel, 8, a resident of the Gongabu area of Kathmandu, carry his body to Pashupatinath the same day they recover it from the rubble that crushed him. Pawan’s body isn’t wrapped in a plastic sheet – his family didn’t have time to obtain the usual necessities. Attendants place the boy’s body on his funeral pyre.

Rajan Bosel, Pawan’s father, sets flowers on his son’s body and gazes at his face.

Rajan Bosel’s eyes are dry. He says he has made himself strong.

Nearby, Rajan Bosel’s niece, Asmita Thapa screams with grief over the death of her cousin Pawan, whom she loved as a brother.

“What was my brother’s fault?” Asmita Thapa says. “Why did God snatch him from us? My brother! He should have taken me instead of him.”

Rajan Bosel and his oldest son, Prabhash Bosel, 12, are the only survivors in their immediate family.

“The earthquake killed my two brothers,” says Prabhash Bosel, tears streaming down his face. “What will I do alone?”

Rajan Bosel tries to be philosophical.

“Such things also happen in our lives,” he says. “We have to bear everything that comes. All my basis for survival has finished. But, I have to live for my eldest son.”