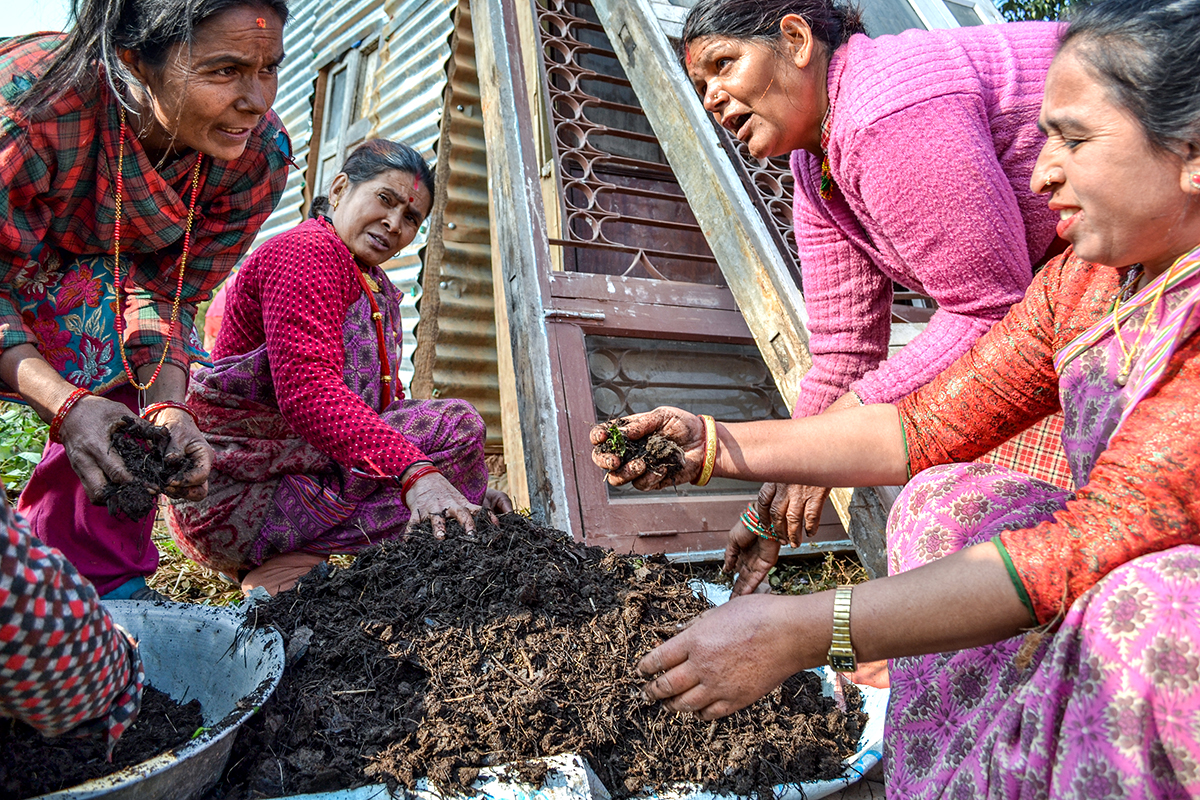 KAVREPALANCHOWK, NEPAL — Kamala Timilsina walks toward a vast field outside her home in Kalche Besi, a village in Nepal’s northwestern Kavrepalanchowk district, with a sickle and sack in hand. The farmer pulls cauliflower from the ground and carefully chops off the leaves before tossing the vegetable into the sack.

“The vehicle is coming today,” she says.

At harvest time, men from Banepa, the closest town to her village, come to buy some of her vegetables to sell in food markets.

For years, Timilsina sprayed her vegetables with chemical pesticides to prevent them from being ravaged by pests. But the quality of the soil degraded over time, and the pests became resistant to the products she used. Eventually, there weren’t many vegetables to sell at the end of each harvest season, she says. 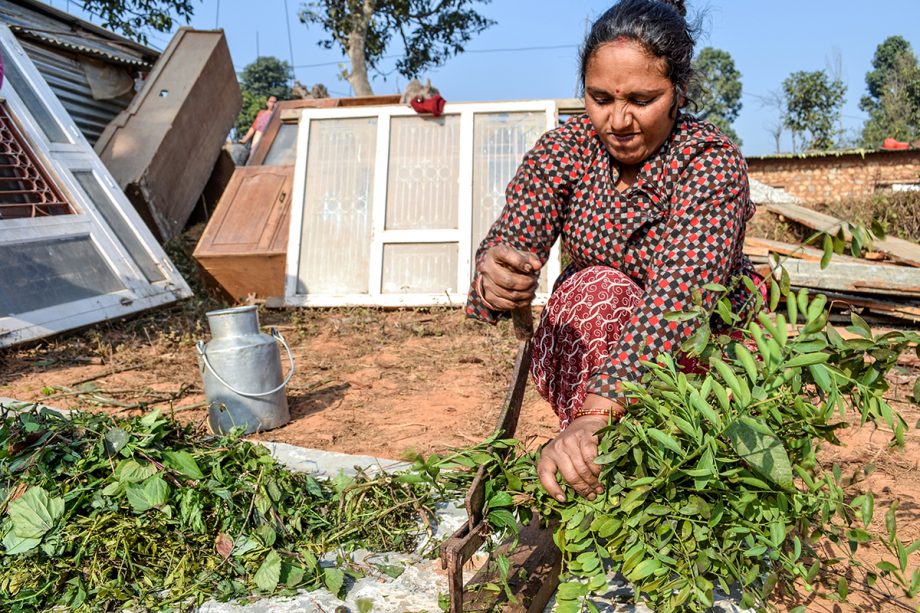 Laxmi Timilsina, a farmer in Kalche Besi, chops leaves used to make jholmal, a type of bio-fertilizer commonly used by farmers in the village.

The use of locally made bio-pesticides and bio-fertilizers, called “jholmal,” have improved soil quality, cut production costs and increased crop yields for some farmers in the Kavrepalanchowk district, about 32 kilometers (20 miles) from Kathmandu, Nepal’s capital. But others continue to rely on chemical-based pesticides and fertilizers to help their crops grow fast and meet Nepal’s growing demand for food, despite the health and environmental risks related to the products’ use.

There is a greater need for education and training among rural farmers to encourage the use of organic fertilizers and pesticides, advocates say.

Farmers across the country have limited access to resources and technologies, hindering crop cultivation. Traditionally, many farmers in the Kavrepalanchowk district have used manure to fertilize their crops, but they were exposed to pests that destroyed the crops before harvest.

Many have turned to chemical-based pesticides and fertilizers to help their crops grow quickly and keep them free from pests and diseases. But consuming crops that are consistently exposed to pesticides can be harmful, causing chronic health complications including birth defects and tumors, says Shankar Sapkota, assistant spokesman for the Ministry of Agricultural Development. Chemical-based pesticides must be used safely in quantified doses, but many farmers do not know this, he says.

“A few years ago, farmers put pesticides in concentrated doses [on crops] and harvested them before the waiting period,” he says. “Consumers who were aware didn’t buy vegetables for almost two years.” 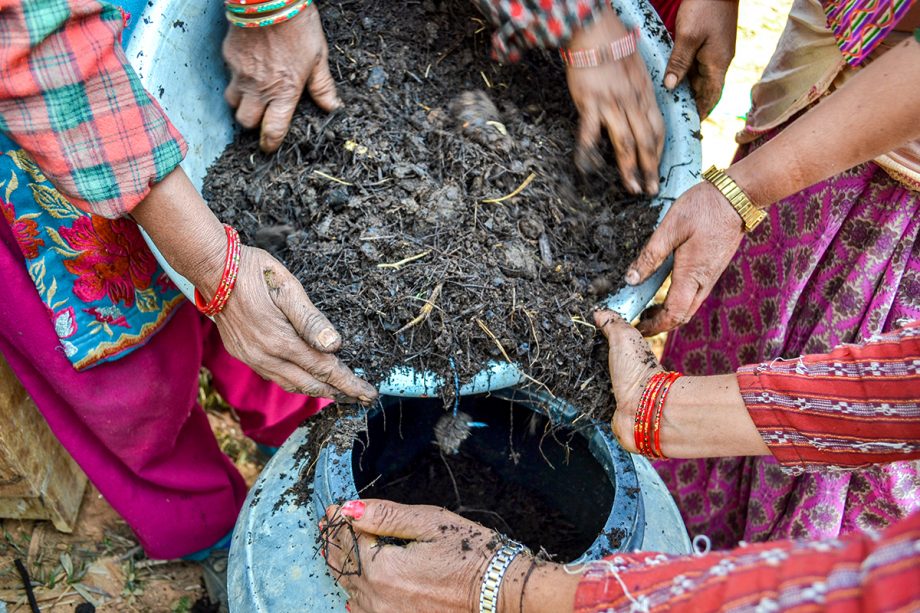 A group of farmers in Kalche Besi, a village in northwestern Nepal, place cow and buffalo manure into a large plastic container to begin the process of making bio-pesticides and bio-fertilizers known as jholmal.

In turn, some market vendors stopped buying from farmers in the village, he says.

Some farmers have opted for jholmal to improve their sales and the way they grow their crops.

A majority of these organic fertilizers and pesticides are made by farmers in their homes, says Roshan Subedi, a project coordinator with the Center for Environmental and Agricultural Policy Research, a nongovernmental organization that funds the production of the products.

Jholmal is the result of local knowledge plus scientific research, Subedi says.

When production of jholmal began in 2014, local farmers researched and experimented to ensure that the product worked well on their crops, Subedi says. Farmers spent a year mixing different quantities and concentrations of ingredients, including animal urine, manure, water and plants, as well as “jeevatu,” a mixture of microorganisms that was developed by a Nepalese scientist and that contains ingredients such as lactic acid bacteria and yeast, he says.

After applying the fertilizer to the roots of their crops weekly, farmers noticed increased yields and improved soil quality, Subedi says.

Farmers have developed three different types of jholmal, each one serving a specific purpose, he says. For example, a second strain of jholmal, also known as jholmal 2, is made from cow and buffalo urine, water and jeevatu, Sprayed on vegetables, its odor prevents pests from devouring crops, he says.

Though the use of manure and animal urine is not new in farming, combining the two with other indigenous ingredients distinguishes jholmal from other types of bio-fertilizers and bio-pesticides, Subedi says.

Bimala Bajgain, who has been a farmer for 12 years in Kalche Besi, says she began using all three types of jholmal in 2014 when the pests eating her crops became resistant to the chemical pesticides she had been using.

“Production was high, and income was high,” Bajgain says of her initial use of chemical pesticides.

Each three- to five-month harvest season, Bajgain was earning up to 50,000 rupees ($485) selling her crops grown with the help of chemical pesticides. But then the quality of the soil degraded, crop yields decreased and she was earning half of that.

Since she started using jholmal, Bajgain earns up to 75,000 rupees ($725) each harvest season, she says. Using jholmal also has helped her to save money, because she does not have to buy chemical pesticides, which had cost her up to 20,000 rupees ($195) a year. Producing jholmal incurs little to no costs, because the ingredients can be easily found in the village, but many farmers are not aware of this, she says.

“We did not know the importance of animal urine and manure,” Bajgain says. 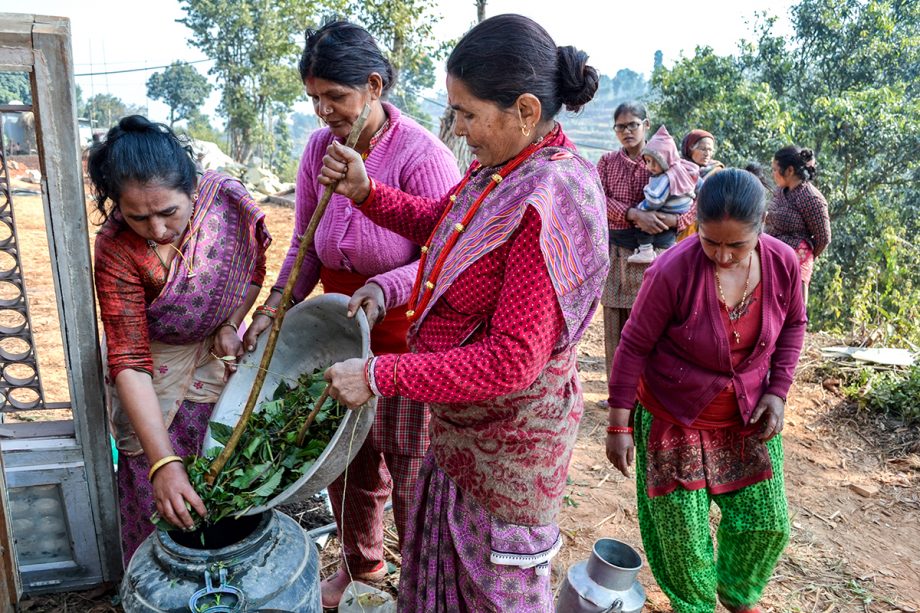 Farmers add chopped leaves to a plastic container containing cow and buffalo urine, some of the ingredients used to make jholmal 2, a bio-fertilizer.

While a majority of farmers in Bajgain’s village use jholmal, others in Ranipani and nearby villages still prefer chemical pesticides and fertilizers, because they say it helps their vegetables grow fast, Subedi says.

Basudev Parajuli, a farmer who lives in Ranipani, says he has always used chemical pesticides to grow his tomatoes and potatoes.

“The vegetables grow fast and look good,” he says.

Some farmers who still use chemical pesticides do not know that it can be harmful to a person’s health, Subedi says. Through trainings, he says, his organization teaches local farmers about the potential harmful effects of using chemical-based pesticides and fertilizers in farming. The group also teaches farmers how to make their own bio-fertilizers and bio-pesticides. Trainings are held two to three times each month, Subedi says.

Despite successes reported by local farmers using jholmal, experts say there is a need for more collaborative research and training among scientists and farmers. Support from the government to encourage the use of the bio-pesticides and bio-fertilizers in the district and in other parts of the country also would help, they say.

“We are in talks with the government to replicate the use of jholmal in other parts of Nepal,” says Nand Kishor Agrawal, program coordinator at the Himalayan Climate Change Adaptation Programme. “We want to promote jholmal and perform more scientific research.” 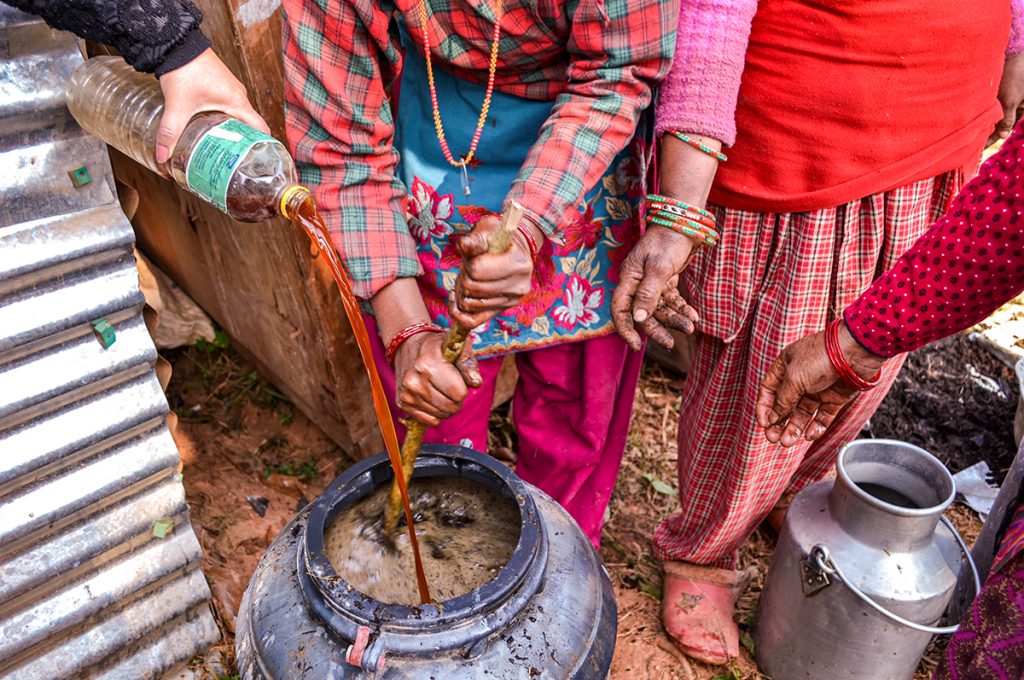 Women farmers add jeevatu, a mixture of microorganisms, to cow and buffalo urine and chopped leaves in a plastic container, occasionally mixing the ingredients. This is the final step in making one of the three versions of jholmal. 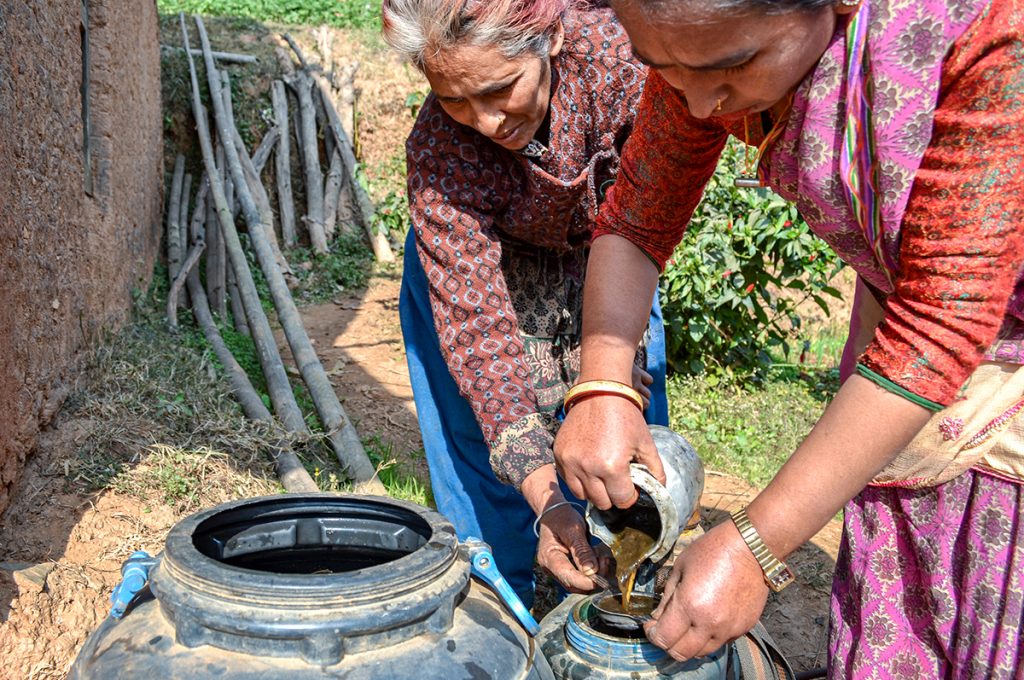 Laxmi Timilsina (left) and Bimala Bajgain (right) transfer the mixture of animal urine, chopped leaves and jeevatu from a plastic container to a spraying can. 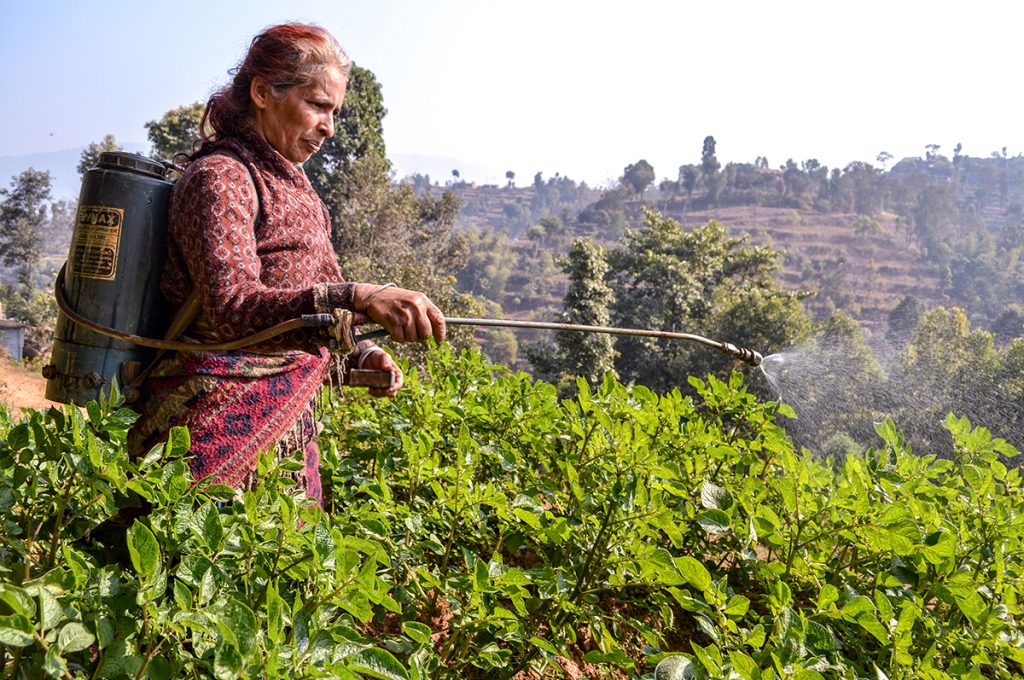 Laxmi Timilsina applies a spray-on version of jholmal to her crops on her farm in Kalche Besi.