Skip to main content
Chudamani Magar works on a Buddha statue in his workshop in Chysal, a neighborhood in Lalitpur. Photos by Shilu Manandhar, GPJ Nepal

For centuries, Buddhists belonging to Nepal’s Newar caste have been making and selling metal statues and figurines of their sacred deities. But more members of the caste are choosing other careers, and with demand for the sacred sculptures growing, Newar members are revealing the secrets of their art to Nepalese from other castes.

LALITPUR, NEPAL — Chudamani Magar has transformed the roof of his landlord’s apartment building into an art studio, where he carries on the age-old statue-making tradition of the Shakyas.

For centuries, the Shakyas, a group of Buddhists belonging to the Newar caste who can be easily identified by their last names, have been making and selling metal statues and figurines of the deities that they worship, says Magar while pounding an unfinished piece of metal with his mallet.

But Magar is neither a Shakya nor a member of the Newar caste, one of the highest-ranking groups of people in Nepal’s hierarchical caste system. Instead, he belongs to the Magar caste, a group of people who typically live in the mountainous region of west-central Nepal. 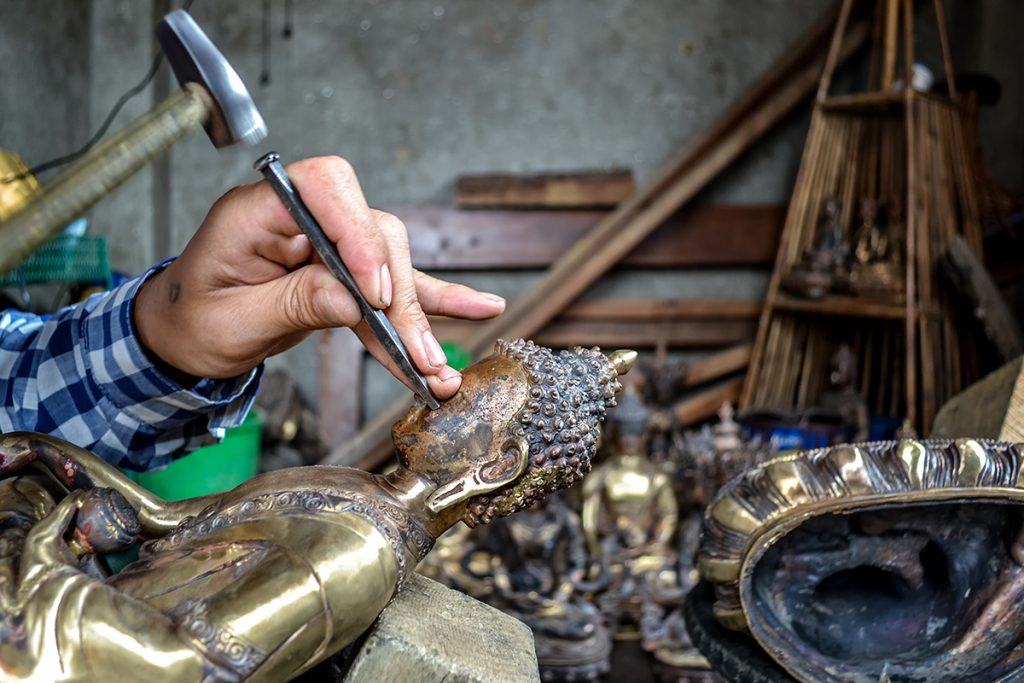 Chudamani Magar specializes in “katanjya,” a part of the statue-making process during which he carves designs into the metal.

When he moved 10 years ago to Kathmandu, Nepal’s capital, he was simply looking for a job.

“I wanted to learn a skill that earned me a good income,” he says.

Shortly after the move, a Shakya craftsman offered to teach Magar how to make metal statues. Magar says he’s stuck with the art ever since, because it pays well.

Historically, the Shakyas have kept statue-making to themselves, but that’s changing. With more and more young members of the group leaving their communities and choosing formal jobs over the traditional trade, those left practicing the craft have decided to train people from other castes. New and old artisans say the demand for their products is growing. 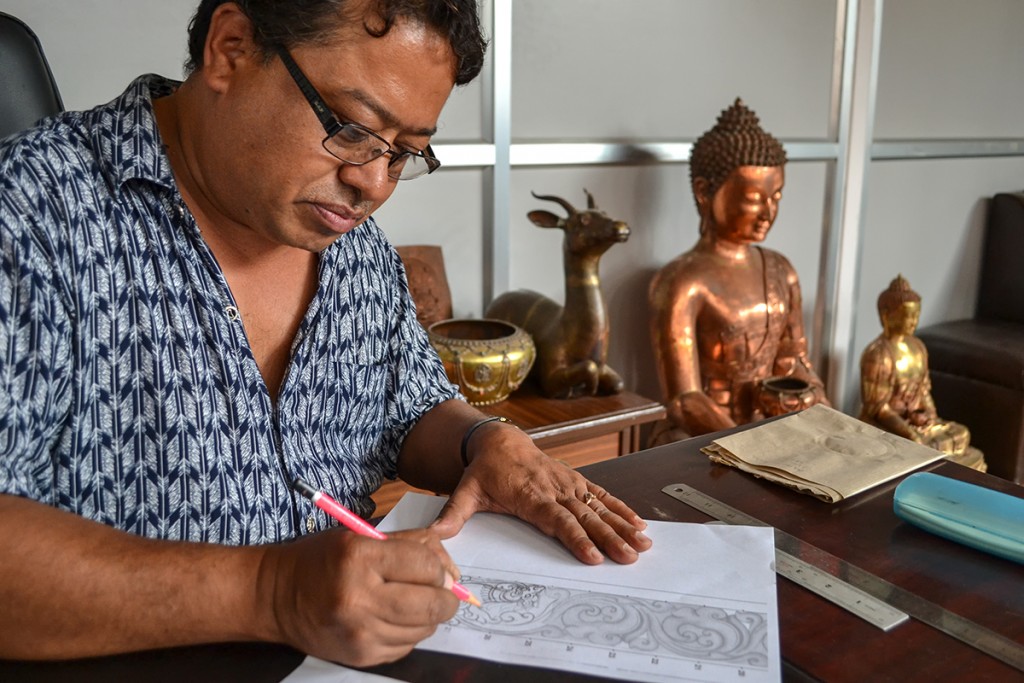 Rajkumar Shakya, a statue-maker for 35 years, sketches a design to be carved into a metal statue that his team of sculptors has been working on for nearly two years. 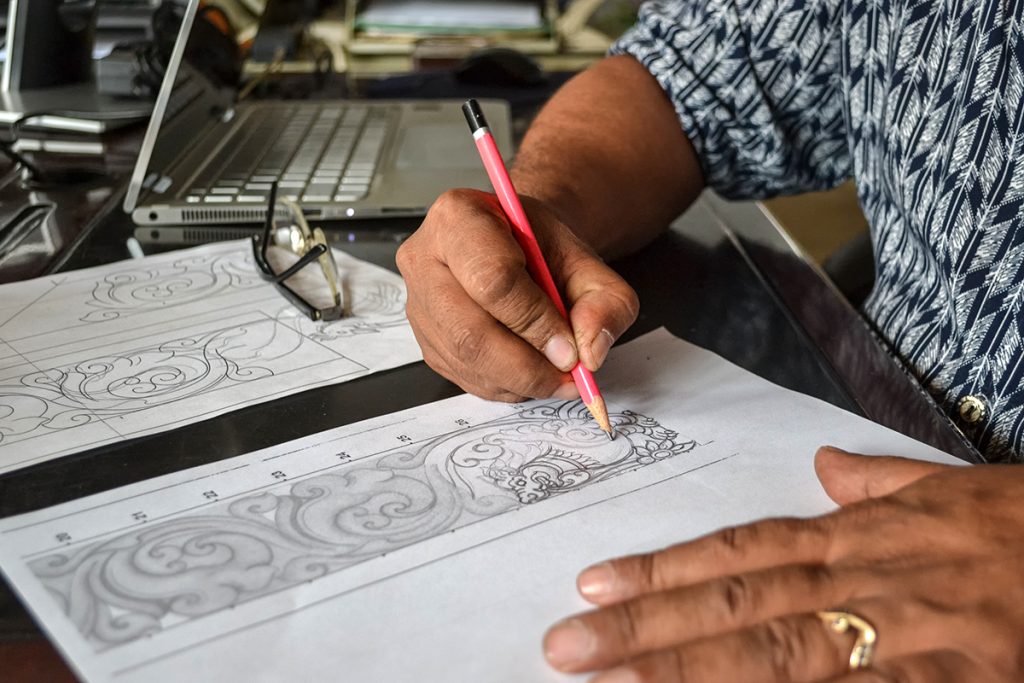 The process of designing details that go on metal statues is called “chwojya,” says Shakya, who employs 20 people at his workshop in Lalitpur, a town in central Nepal.

The crafts, which include traditional Shakya statues, are sent to neighboring China and India, which is a hot spot for young Nepalese men and women looking for formal work. Nepal also exports metal crafts to the U.S., where about 3 million people practice Buddhism.

A Shakya artist spends up to three months sculpting one 12-inch statue, Magar says. The process requires patience and the utmost attention to detail. It takes even longer for master crafters to prepare others for the job, says Magar, who trained for four years.

Rajkumar Shakya learned how to make the traditional metal statues from his father. He says the high demand for the crafts means that veterans such as him have to rely on trainees to shorten the production process.

Shakya has passed on his skills to his 20 employees, who belong to different castes. Each person works together to make one statue: One person carves out the body frame, another works on shaping body parts, someone else focuses on engraving designs, and another person paints the completed product. 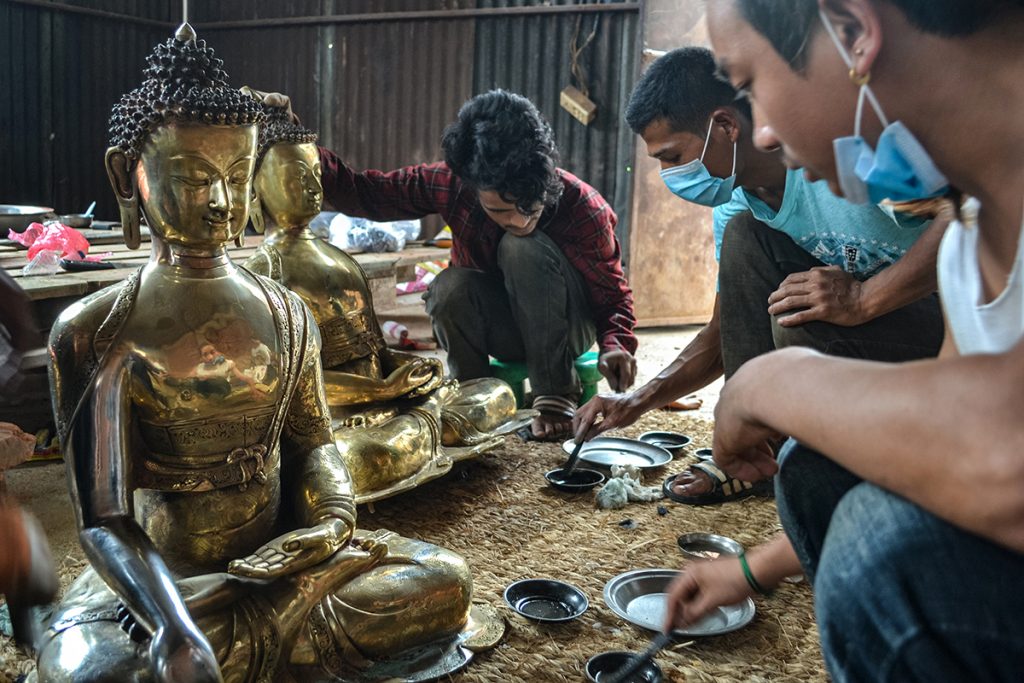 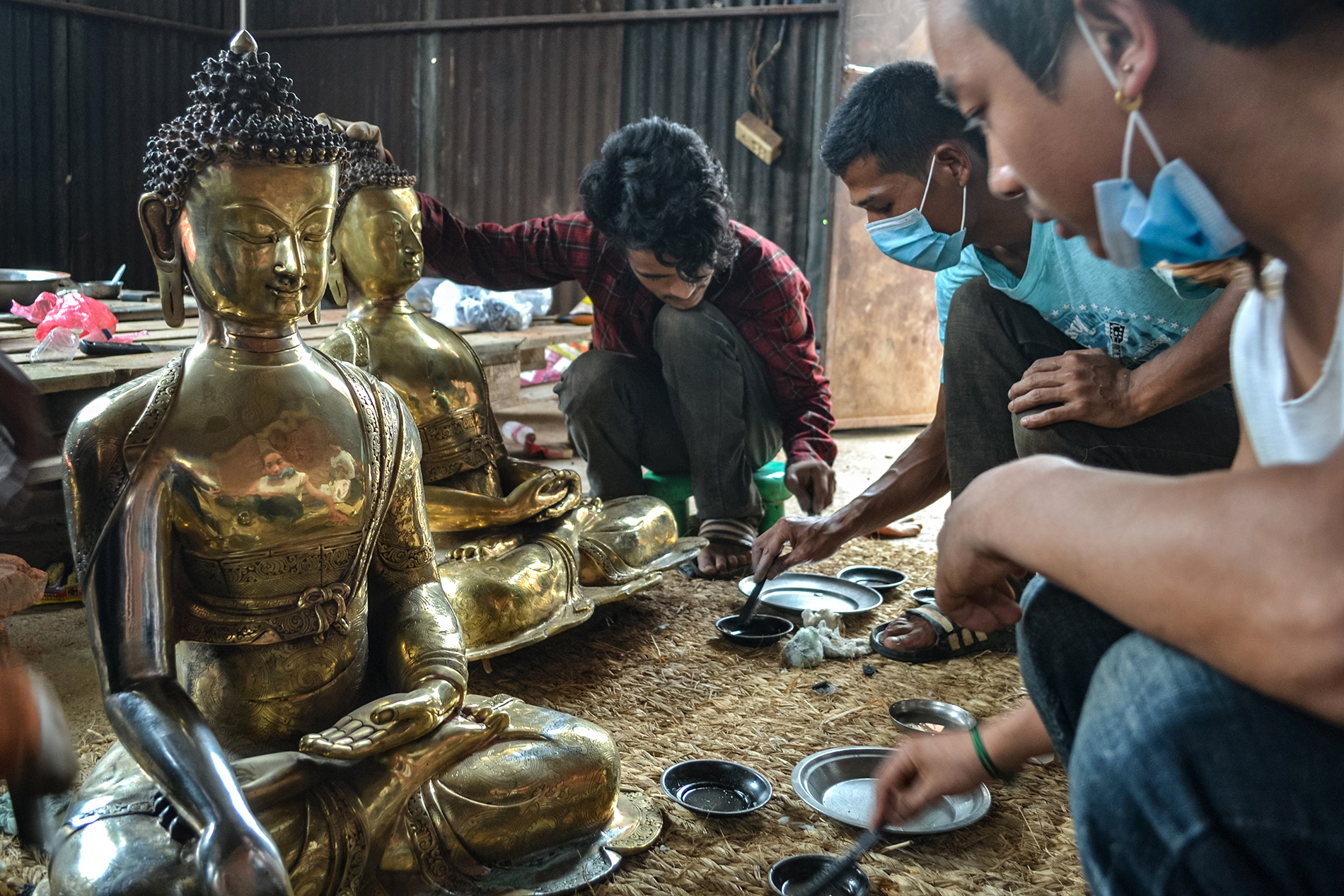 Production is quicker this way, but the statues have less detail than those that Shakya has made on his own, he says.

His role in the statue-making process is key, he says. He’s responsible for a technique called “katanjya,” which involves etching designs into the metal before passing it along to another worker. Magar works with 15 other artists to produce 15 to 20 statues a month. 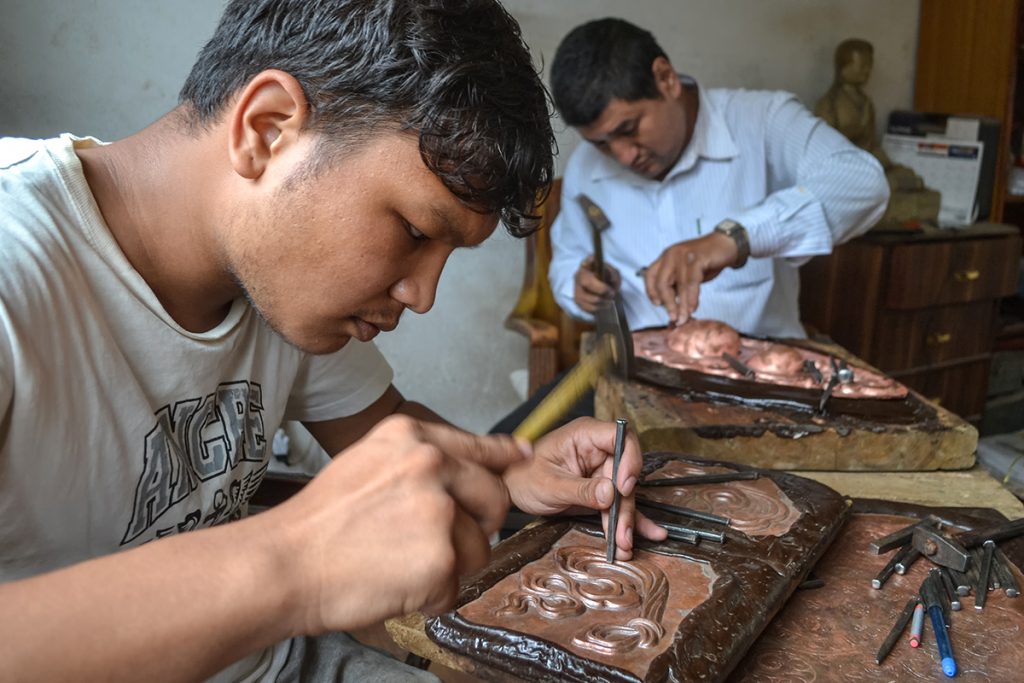 Suhel Shakya (left) engraves a design into pieces of metal that will be used in a statue of Guru Rinpoche, a legendary Buddhist figure. His colleague, Rajesh Shakya, is responsible for the “katyanjya” for a Buddha statue. 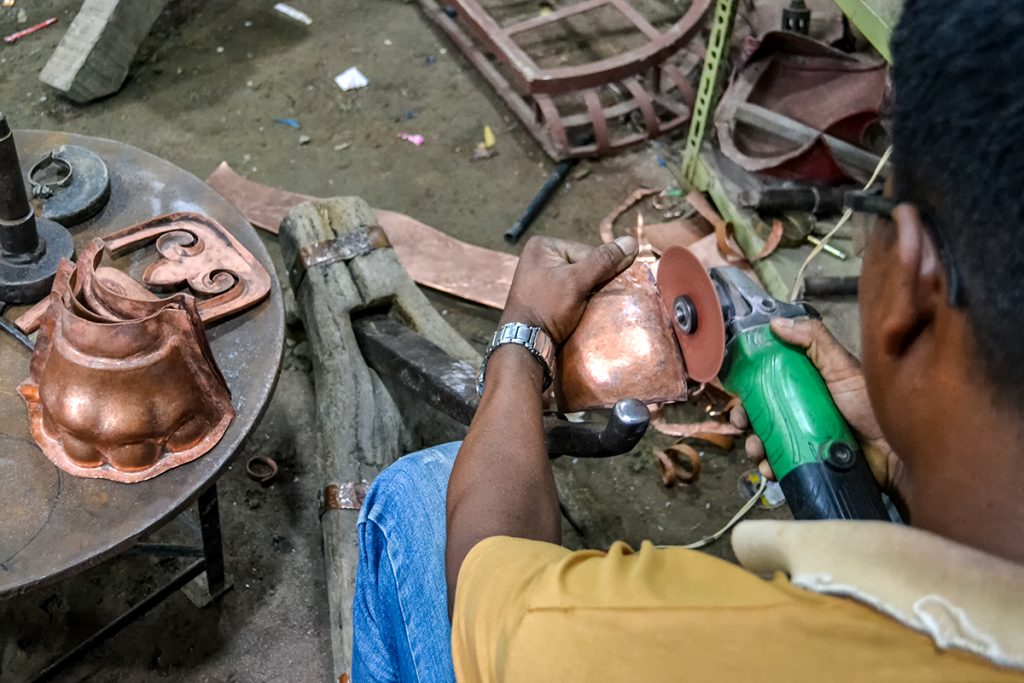 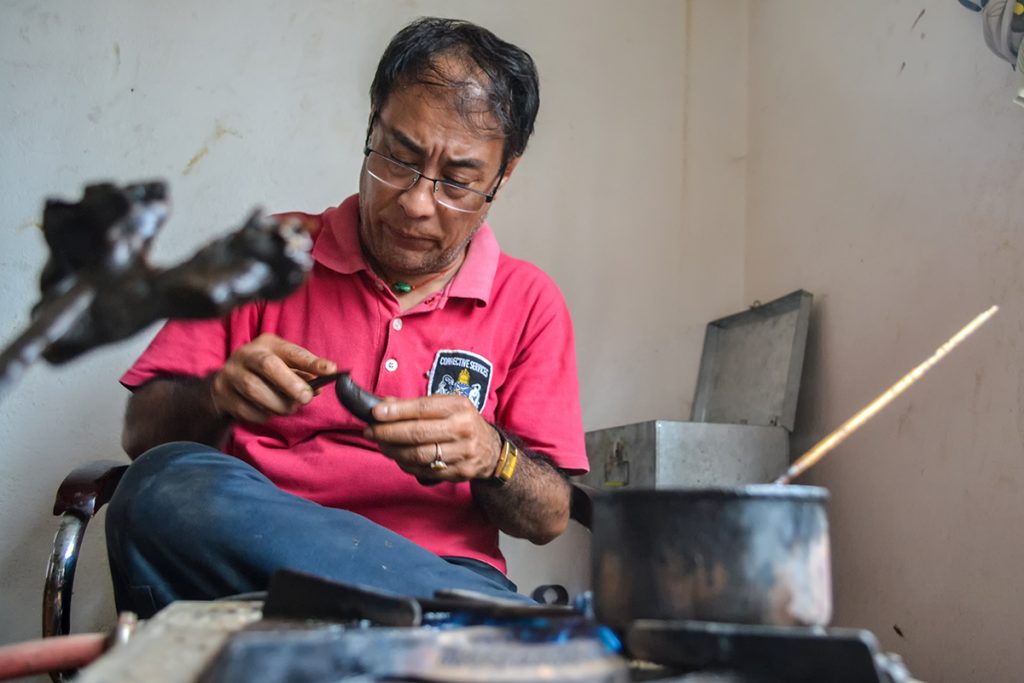 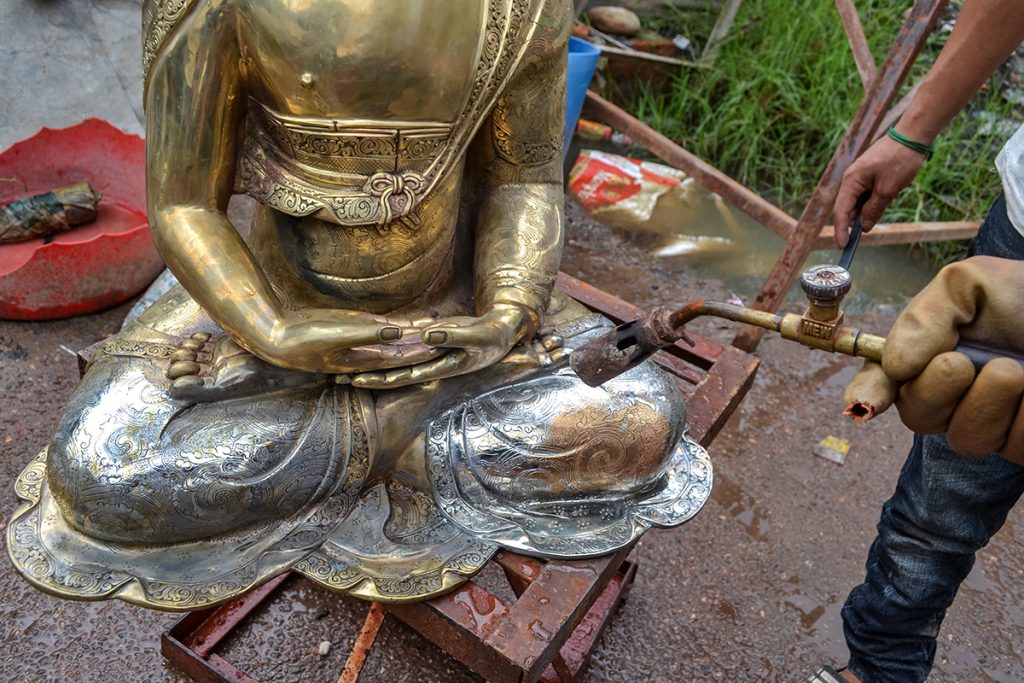 Dev Magar, Yak Bahadur Magar’s apprentice, puts a flame to the painted statue in the final step of the statue-making process. This will cause the mercury to evaporate and leave behind the gold.

“Not one [non-Shakya] artist knows the entire process,” he says. “Only a Shakya artist knows all the process and can make the statue, because they have been taught by their forefathers.”

Like Chudamani Magar, Yak Bahadur Magar relocated to the country’s capital for work. He learned the intricate process of painting statues with gold, from his former Shakya employer.

“Since the money was good from this handicraft business, I started my own workshop 12 years ago,” Yak Bahadur Magar says. He now has a total of 10 people working for him. 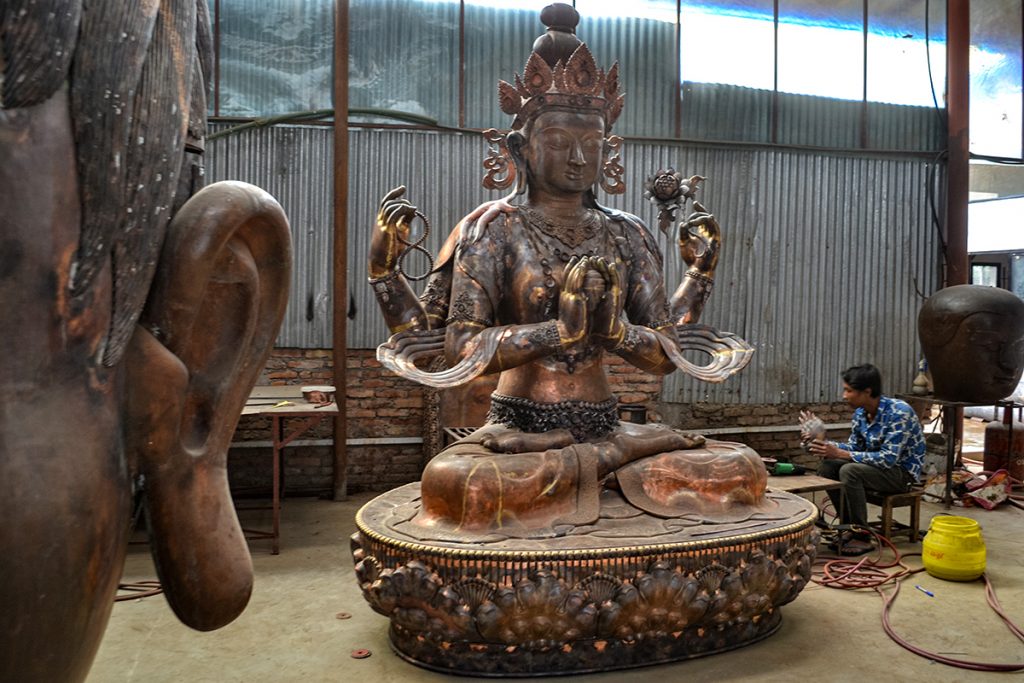 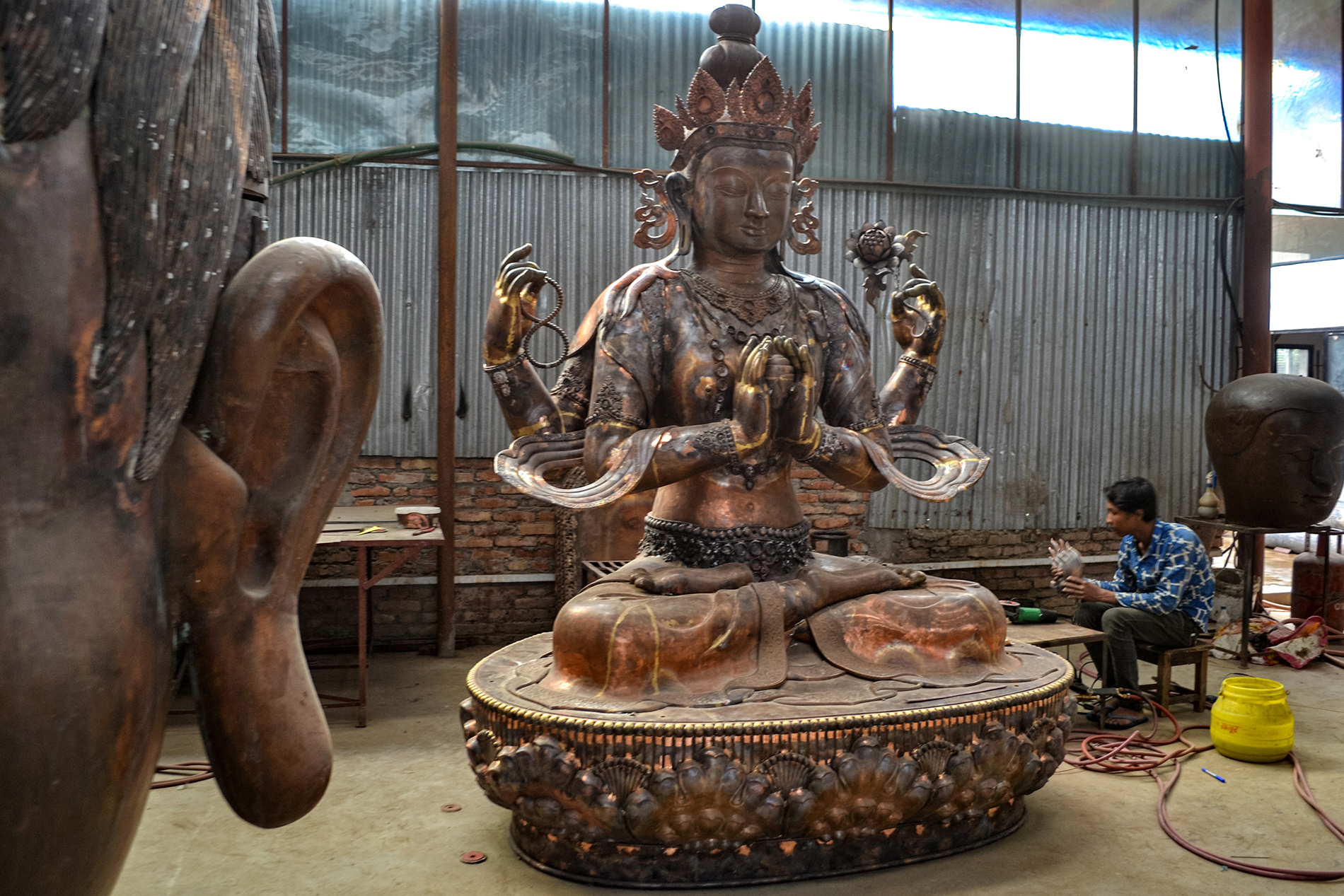 Rajkumar Shakya says he sells statues like this locally and to international buyers.

Yak Bahadur Magar is one of an estimated 500,000 statue-makers in the country, says Prachanda Shakya, vice president of the Federation of Handicraft Associations of Nepal. Many of them left the places where they grew up and moved to parts of the country where Shakya statue-makers reside.

There were about 25,000 Newar sculptors in Nepal 25 years ago, Shakya says. At that time, some feared that the traditional trade would soon disappear. With members of other castes stepping in to help the Shakya people, statue-making has been preserved, Shakya says.

Editor’s note: No sources in the story are related.