Skip to main content
The story you are reading was published on Saturday September 16, 2017. To read more recent stories click here. 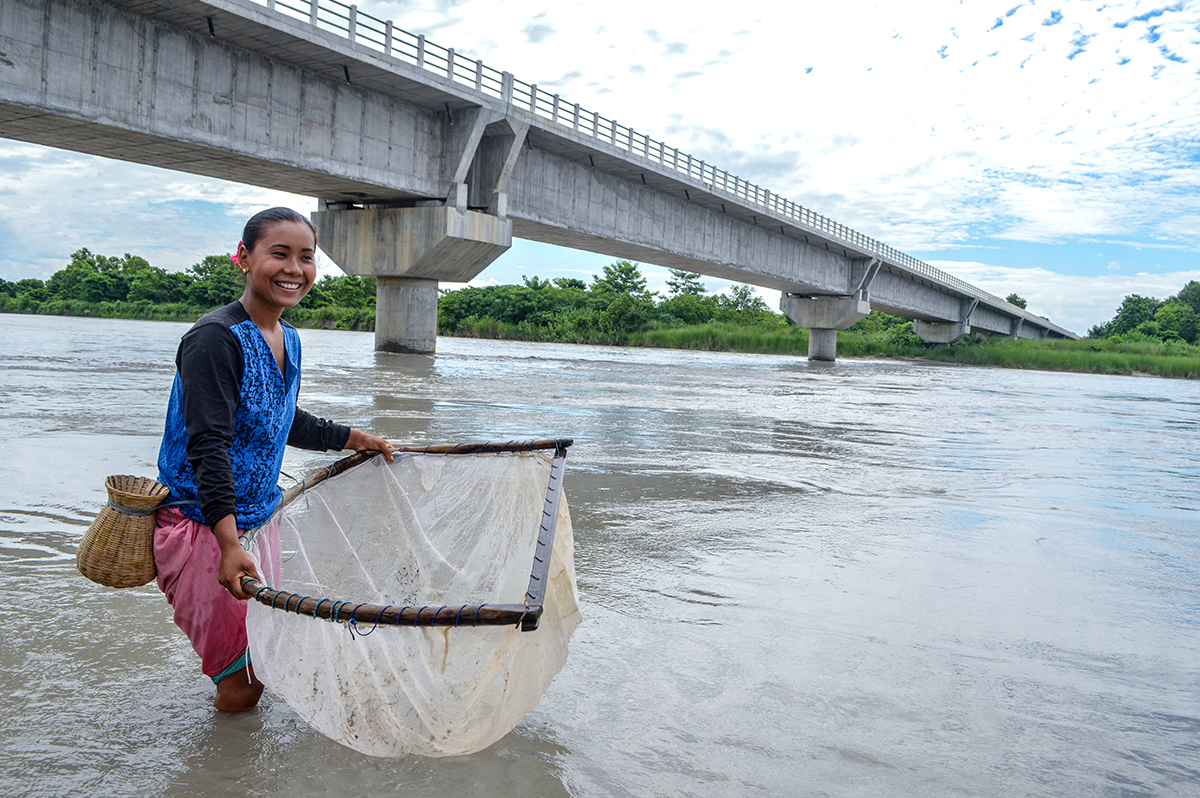 KOTHIYAGHAT, NEPAL — It is a scorching Thursday. In western Nepal’s Bardiya district, Kothiyaghat Bridge looks beautiful, spanning across the Bhangalo Geruwa channel of the Karnali River.

The bridge – the longest in Nepal – is 1,025 meters long (3,362 feet) and relatively new to the area, having been constructed about two years ago, says Om Gywali, an officer at the District Coordination Committee Office in Bardiya.

The blue sky, the river flowing beneath the concrete bridge, the surrounding forest and nearby villages offer a pleasant experience for those who come to this place.

Groups of friends and family from Bardiya and the neighboring Banke district travel to Rajapur via the Kothiyaghat Bridge in rental cars and public buses.

The bridge connects multiple vicinities and village development committees in the district and has transformed daily life and tourism in the area. 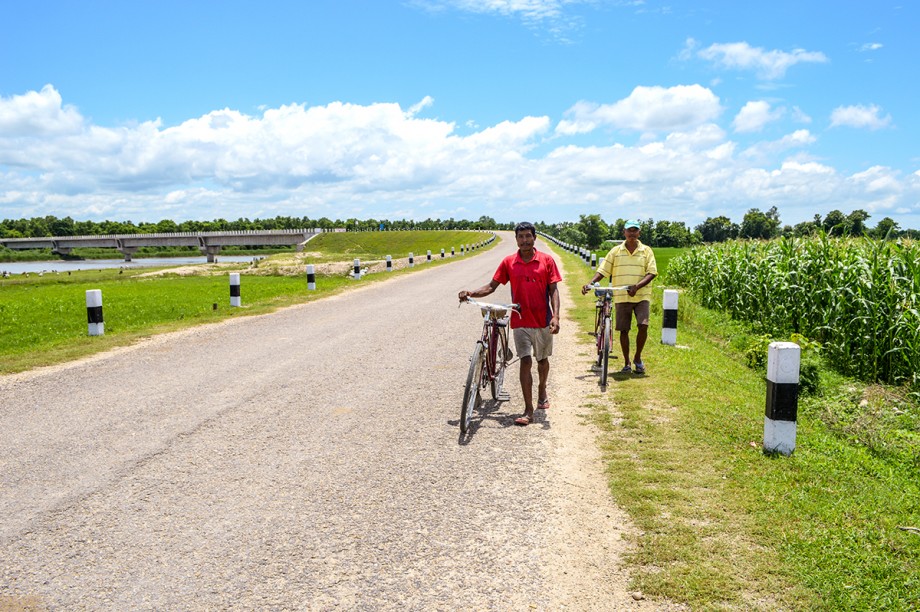 It’s a long walk across the Kothiyaghat Bridge, which is 1,025 meters long (3,362 feet), so it’s not uncommon to see people travel across on a bicycle.

Bharat Kafle, 23, is a native of Nawalparasi, a district east of Bardiya, who came to Kothiyaghat Bridge with his friends in a rental car. He says he was mesmerized by the scenic beauty of the paddy plantations, forests and river.

“While standing on the Kothiyaghat Bridge and gazing around, I felt like I have come [to] somewhere in Europe,” Kafle says.

The bridge was built in 2015, or year 2072 of Nepal’s Vikram Samvat calendar, and it’s reached via the East-West Postal Highway. It takes three hours to reach Kothiyaghat on a public bus while it takes no more than an hour in a car from Gulariya, the capital of Bardiya district.

The area is dominated by members of the Tharu tribe, who eke out a living from vegetable and paddy farming and fishing in a local river. They cross the bridge to sell their products at nearby markets. 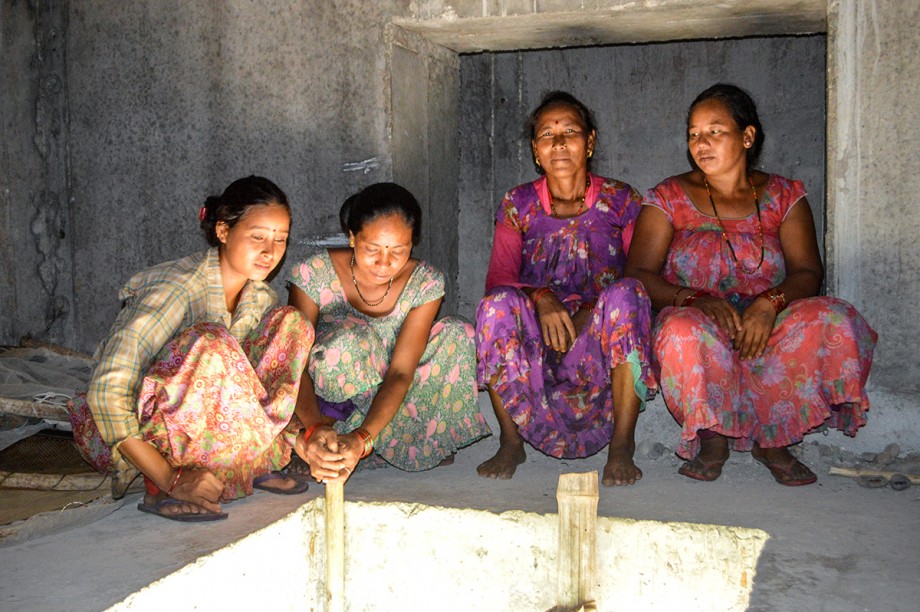 Women who live in nearby Rajapur earn a living by fishing in the river. After the 2015 construction of the bridge, the women’s process has changed. Now, they can climb inside the bridge from an entrance near shore, walk to the middle of the river via the bridge’s interior, and cast their fishing nets into the water.

While the Kothiyaghat Bridge has made it easier for locals transporting produce, patients going to the hospital, students walking to school and travelers, it hasn’t been promoted as a tourist destination. This is due to a lack of proper planning and management of tourism development, something that the government aims to invest in eventually, Gywali says.

Yet visitors come to take in the site anyway. Every day, at least one bus of tourists comes to the bridge and to visit the Rajapur municipality.

“The most fascinating thing is that there is land between two rivers,” Kafle says. “It’s so amazing.”

He adds that he feels like he’s watching the National Geographic channel on television when he sees the dense forest and dolphins in the river during the trip to Rajapur.

There are a number of parks and wildlife sanctuaries, including Bardiya National Park and Katarniaghat Wildlife Sanctuary of India, close to the Kothiyaghat Bridge. Gywali says the Bardiya district has been a corridor for wild animals, and animals that have habitats in the forests that border India and Nepal are often found nearby. 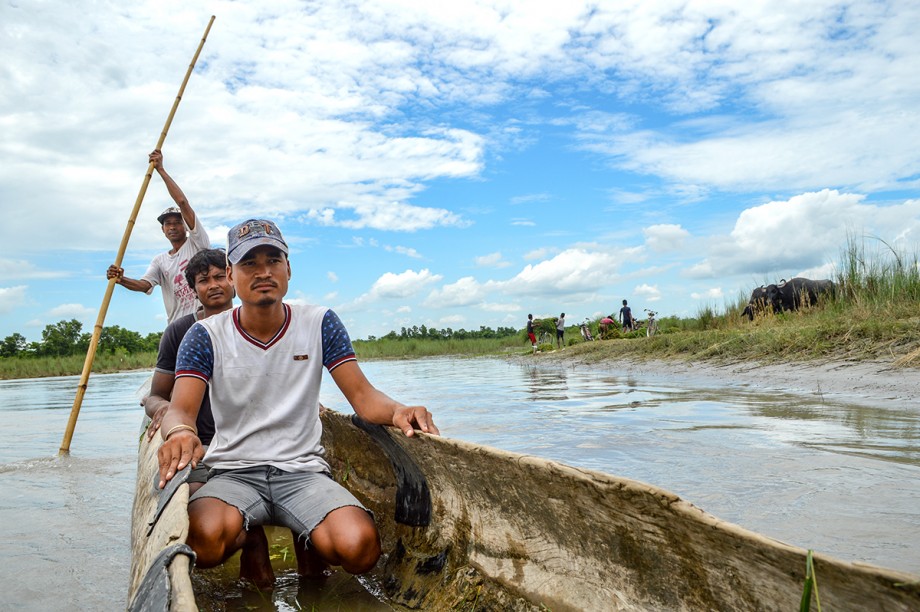 For years, the primary way of getting across the Bhangalo Geruwa river was by boat. Although the Kothiyaghat Bridge has changed that, many boating services still exist. For example, the young men in this boat are part of a 40-person club that transports people and goods on behalf of local villages.

Bardiya National Park is also nearby. In the protected park, people can see endangered wild animals, including blackbucks (antelopes indigenous to the Indian plains), tigers and elephants.

Ambika Shrestha, 41, a tourist who came to Rajapur with her family from Banke district, says that the beauty of the place made her very happy.

Shrestha says that her family of nine is on a two-day trip and plans to return home after going to Tikapur Park from Kothiyaghat Bridge and Rajapaur. She says that she was enthralled to see blackbuck antelopes, the beautiful river and the forest during her 15-minute walk on the bridge.

Tourists can see dolphins and crocodiles in the river and wild animals in the forest. The district’s development committee had allocated 2 million Nepalese rupees ($19,560) to build a recreational park near the Kothiyaghat Bridge, but the budget was frozen after no progress was made on building the park, Gyawali says. 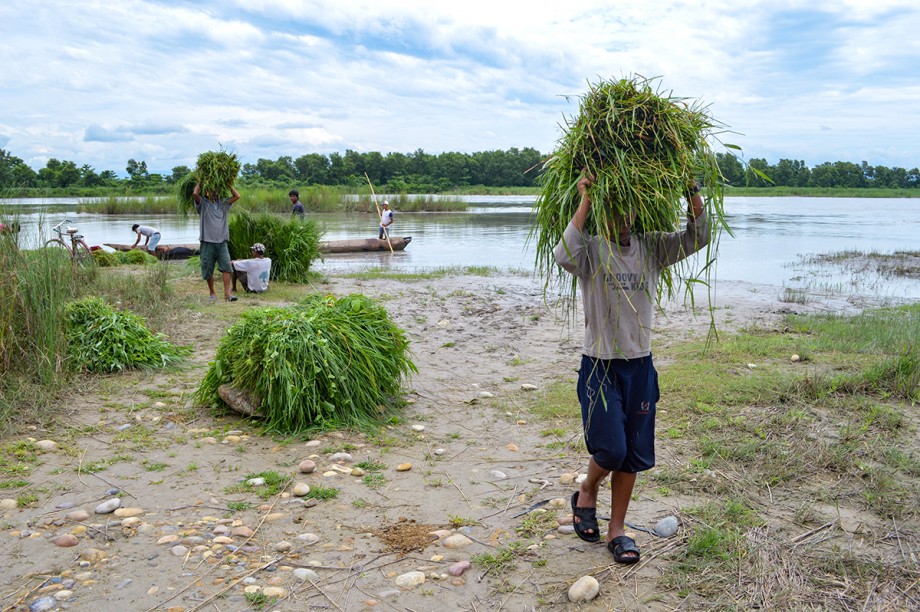 Young men and boys bring grass they have gathered to the river’s edge. The grass will be transported in a boat or across the bridge to feed livestock.

Bimala Chaudhary, 35, serves local food to tourists from her eatery in a small hut. She says that the bridge has increased her business.

Nobody used to visit Rajapur until the bridge was built, but now there is a lot of hustle and bustle, she says.

“Earlier we used to cross the river on a steamer or a boat. Now, after the construction of the bridge, we have been able to use facilities of all types of vehicles,” she says. 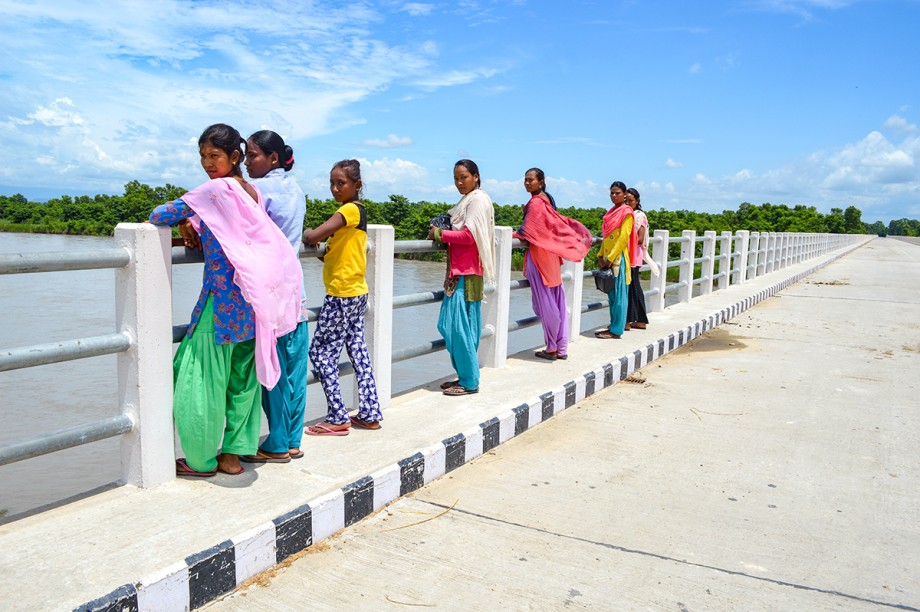 Kothiyaghat Bridge is not all about business. These women and young girls traveled from Gulariya, a municipality about an hour away, to take in the view of the country’s longest bridge.

While in the area, visit the Bardiya National Park to glimpse rare and wild animals, including blackbucks, and to view scenic lakes.

For food and accommodations in Kothiyaghat, contact the owner of Kothiyaghat Riverside Cottage, Tejendra Neupaney, at +9848090233.