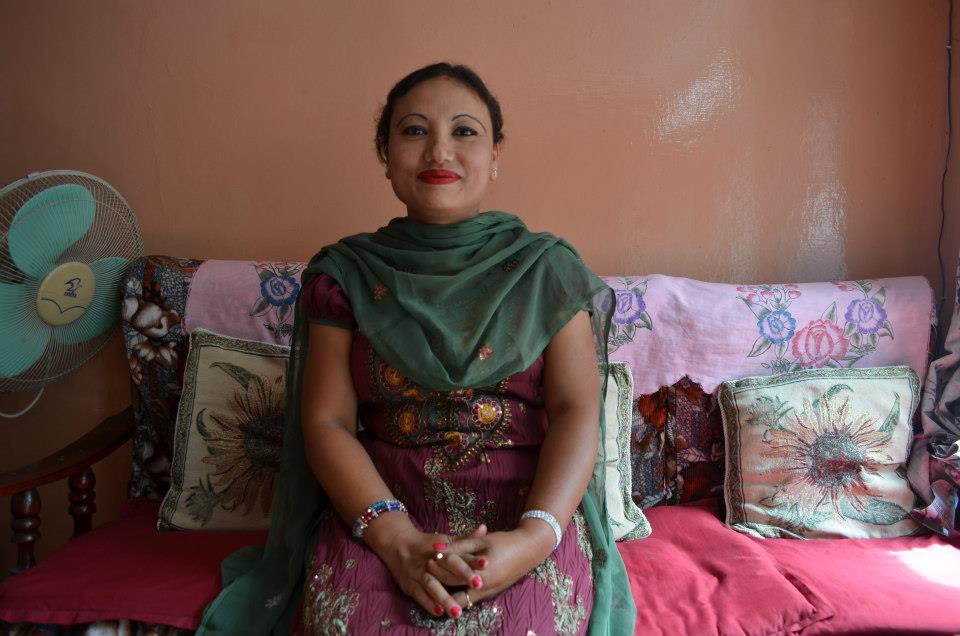 KATHMANDU, NEPAL – Anita Shakya, 39, silently descends the wooden staircase in her parents’ house and glides like a deer into the living room. Her movements are so delicate and peaceful that no one is aware of her presence.

She takes a seat, far from the others sitting in the room. She dons a flowery kurta surwal, traditional attire worn by women in Nepal, and her hair rests neatly in a bun. Dark kohl outlines her eyes, cast down underneath perfectly arched brows.

A breeze blows in from the open window, and she looks up for the first time to gently wipe dust from her eye with a perfectly manicured nail painted the same deep shade of red as her lips.

Pictures of Shakya as a “Kumari” cover the walls of the living room. A Kumari, which means “virgin” in Nepali, is a living goddess believed to be an incarnation of the Hindu goddess Taleju. The photos reveal Shakya at different ages when she served as a Kumari, from the tender age of 5 to 11.

She wears the same rich red and gold attire and traditional gold and silver jewelry in every photo. An ornate, jeweled headdress covers her hair, which is tied in a topknot.

Red lipstick coats her youthful lips, and dark kohl outlines her innocent eyes. The kohl extends all the way to her hairline, and red paint coats her forehead to depict the third eye of the goddess. Devotees waiting to receive blessings from the child goddess kneel before her in the pictures.

Of the 12 Kumaris appointed throughout Nepal, the Kumari from Basantapur, the old city of the Malla Dynasty, is considered the most powerful. She is also known as the Royal Kumari, as she protects the rulers of the country. This is the title Shakya held.

Shakya became the 10th Royal Kumari in 1978 at the age of 5 and moved away from her family’s home into the Kumari house in the Basantapur area of Kathmandu, Nepal’s capital. She says she was too young to remember the Kumari selection process.

She soon got used to wearing only red and being cared for by Indra Maya Shakya, her “chitaidar,” a female caretaker responsible for looking after a Kumari. Her daily routine included performing rituals in the morning and attending to devotees who came for blessings. Other times, she played with her chitaidar’s children.

“I don’t remember much, but I used to be excited on Indra Jatra because they would take me out of the Kumari house for the festival,” she says of the annual festival where the public gets to see the Kumari carried around in a chariot.

Hindus and Buddhists worship the prepubescent girls chosen to serve as the Kumari goddess until her first menstruation. But former Kumaris say they struggle to return to normal life, having never attended formal school or walked outside. Although the government has introduced some schooling for Kumaris, education advocates demand more so that the young women can go on to have careers.

A selection committee of high priests chooses girls between ages 4 and 5 from the different Buddhist Newari castes to serve as the Kumari. The Shakya clan of this tribe is the only one eligible to produce Royal Kumaris.

The selection committee reviews the girl’s physical appearance to make sure she possesses the 32 attributes of perfection, such as having no scars on her body. After the high priests examine her, they review her birth chart.

“The Kumari’s horoscope is seen if it is good and prosperous for the country,” says Rashmila Shakya, who replaced Anita Shakya as the 11th Royal Kumari.

If the horoscopes complement each other, she must then undergo multiple rituals to prove her fearlessness and to cleanse her body and spirit before she is crowned as Kumari.

She then has to leave her home and family and live in a Kumari house. Kumaris in other cities live in simple houses.

In Kathmandu, the Royal Kumari resides in the Kumari house situated in the southern end of Basantapur’s Durbar Square. During her reign, a Royal Kumari is restricted to the top floor of the three-story traditional Newari house made of fired bricks with intricate wooden carvings on its doors and windows.

Each year, she is taken out of the house only on a few festive occasions, where the public worships her. Her feet are not supposed to touch the ground, so someone always carries her during outdoor visits.

The Indra Jatra festival, held annually in September, is the outing for the Kumari each year. Crowds mobbed the streets at this year’s festival, with people pushing to catch a glimpse of the young Kumari during the procession that starts and ends in Durbar Square. This year was the first time that women pulled the three-story chariot carrying the Kumari.

Red paint covered the forehead of the young girl, with a yellow border and a shiny gold tika dotting the middle. Her red garb, headdress and gold and silver jewelry conveyed her goddess status. Her calm demeanor amidst the crowds belied her age.

A Kumari retires her position and leads an ordinary life after her first menstruation, when it is believed that the goddess Taleju leaves her, Rashmila Shakya explains. But after living away from family and a normal social environment, Kumaris often have difficulty returning to ordinary life. For example, Shakya says she struggled to address her parents as “Mother” and “Father” after she returned home.

Anita Shakya had trouble identifying with her parents while she was still a Kumari.

“Once when my family came to visit me, I ran and sat on Indra Maya’s lap,” recalls Shakya, who was more comfortable with her caretaker than with her own family.

This is the life she led until she was 11 years old.

After her retirement, she returned to her parents’ house, where she still lives.

“Initially, I felt awkward wearing clothes that were not red, and I felt uneasy when my hair touched my face,” says Anita Shakya, whose hair was always tied in a topknot as a Kumari.

She also struggled to climb stairs and could not walk without help on the streets because she had been carried around for years.

But she says her biggest obstacle was education. Because Kumaris didn’t receive any education at the time, she was years behind in school by the time her reign ended.

Her parents enrolled her in a local school six months after her retirement as a Kumari. But she says she felt too old and too tall for her class.

She also drew unwanted attention as a former Kumari.

“I used to get embarrassed because people came to look at me in the classroom,” she says.

She did not continue her education after 10th grade, when Nepali students take the national School Leaving Certificate exam.

The Guthi Sansthan, a government organization under the Ministry of Culture tasked with preserving religious and cultural sites and traditions, including the Kumari’s well-being, introduced formal education for Kumaris in 1992. Amita Shakya, the 12th Royal Kumari, became the first to benefit from the provision.

The Guthi Sansthan appointed a teacher to instruct the Kumari every day at the Kumari house, during which time no devotees are allowed to visit her. The Kumari also takes exams according to school regulations, though she must take them from the house.

“We are in an endeavor to change with time and yet preserve the tradition,” says Baliram Prasad Sah Teli, executive chief administrator of the Guthi Sansthan. “We have provided for a teacher who teaches the Kumari from 12 noon to 3 p.m. every day.”

But Pun Devi Maharjan, a lawyer at Rights Law Private Limited, a law firm in Kathmandu, argues that a few hours of private tutoring is not enough to prepare a Kumari for the rest of her life.

“Is private tuition the answer?” she asks. “Without proper education, how can a Kumari’s future be secure?”

There have been no records of a Kumari failing an exam since the introduction of private schooling, but Maharjan says this doesn’t mean she is learning all that she needs to.

“The teachers do not fail a Kumari in an exam because she is believed to be a goddess,” she says.

Maharjan, who is also an associate at Forum for Women, Law and Development, a nongovernmental organization dedicated to the protection and promotion of human rights, filed a lawsuit in the Nepal Supreme Court in 2005 stating that the Kumari tradition violates children’s rights and individual human rights.

“In the name of culture, the state is mistreating a child,” she says. “A Kumari has not been provided with the right to education, right to movement and right to live with her parents.”

Retired Kumaris find it difficult to adjust to a normal life after retirement, she says. But the government is doing little to smooth this transition from a goddess to a normal human for them, she adds.

Few former Kumaris pursue careers. The Guthi Sansthan provides them with a stipend from the government.

“The retired Kumaris receive a monthly stipend of $40, which is not enough and has to be increased,” says Durga Shakya, a caretaker at the Kathmandu Kumari house.

After Maharjan filed the case on Kumaris, the Supreme Court of Nepal organized a committee to research the issues.

“The committee, to date, has not presented their research,” Maharjan says.

The Kumari has not been provided with any support aside from three hours of formal education per day and a meager stipend, she says.

Others say the government can find a happy medium between traditional rituals and modern necessities.

“The tradition has to be preserved,” says Chunda Bajracharya, an associate professor at Tribhuvan University. “But at the same time, maximum facility and practical education has to be provided to the Kumari.”

Rashmila Shakya received informal education from a tutor during her term as a Kumari and immediately enrolled in school after her retirement. She says she is the first Kumari to complete her education and is currently working as a software engineer.

Now in her final semester of studying information technology in graduate school, she will be the first Kumari to receive a master’s degree. She says she feels lucky for the opportunity live both lives – that of a goddesss and now that of a “human.”

But not all retired Kumaris have had the same educational and employment success.

Anita Shakya, who didn’t receive any informal tutoring while a Kumari, says she wants to become a beautician. But she hasn’t pursed a career despite her family’s encouragement, citing shyness and a lack of confidence.

“If I were given education at an early age, my life would have been different,” she says solemnly.