Although reconstruction after Nepal’s April 2015 earthquake has been ongoing, funds have been difficult to access. Some people say that the money from government grants isn’t enough to rebuild; but others can’t access it all, since they don’t meet land ownership requirements.

Photo at top: Gapa Thuku Bhainatwo (left) and her husband, Krishna Gopal Bhainatwo, sit outside their temporary one-room shelter in Jenla, Nepal, about half an hour away from Kathmandu. They have been living here since a destructive earthquake in April 2015 destroyed their home and surrounding areas.

JENLA, NEPAL – Krishna Gopal Bhainatwo and his wife, Gapa Thuku Bhainatwo, fix rice, lentils and vegetables in their one-room shelter in Jenla, a neighborhood in the Bhaktapur municipality just a few miles from Kathmandu, Nepal’s capital.

Under tin sheets, canvas and bricks, the couple eats their meal. This has been part of their morning routine since April 2015, when a 7.8 magnitude earthquake destroyed their four-story house.

The Gorkha earthquake hit near the city of Kathmandu, flattening entire villages, triggering avalanches across Nepal and devastating 800,000 houses, including the Bhainatwo’s. Nearly 9,000 people died and thousands more were injured during the main quake and aftershocks.

The government tasked the Nepal Reconstruction Authority (NRA) with leading recovery and reconstruction work. That included distributing housing grants, totaling 300,000 Nepalese rupees ($2,629) per eligible household. But more than four years later, many houses have still not been rebuilt, with families calling the grants restrictive and insufficient.

In 2017, GPJ reported that more than two years after the quake less than 1% of families needing aid actually receive it, and that the government could not account for its spending on relief efforts.

Like so many, Krishna Gopal Bhainatwo received the government grant to rebuild. He used the first grant installment of 50,000 rupees ($438) to construct the temporary shelter the couple occupies. That didn’t even cover its full cost of 60,000 rupees ($526).

For more on gaps in government assistance after the earthquake, go beyond the story with GPJ’s research team. 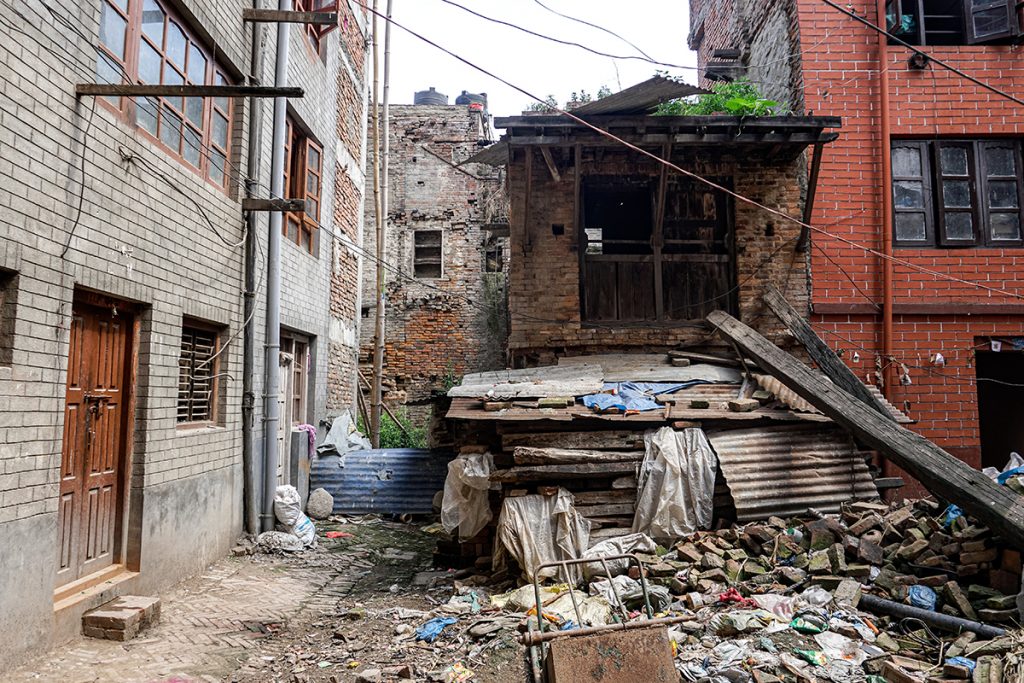 Jenla, an area about half an hour away from Kathmandu, was hit hard by the earthquake that struck Nepal in April 2015 and destroyed thousands of homes. Many houses haven’t been rebuilt, since government assistance has been slow to materialize and often doesn’t cover the full cost.

The Bhainatwo’s shelter doesn’t have a foundation.

“We have no money to rebuild our home,” Krishna Gopal Bhainatwo says as the couple prepares for the next part of their day: an hour-long trek to the fields where they tend to paddy, wheat, cabbage, ginger, garlic and cauliflower for six hours before walking back home. “If I sell my fields then I won’t have means for a living; and if I don’t sell my fields, then I cannot build a house.”

He says selling his land comes with additional risks. He worries that he would not get a good price, because while land prices are increasing, buyers rarely pay the asking price. Plus, the property is in his grandfather’s name and changing it would require filing government paperwork, a process that is neither quick nor easy.

The home they occupied with their husbands before the earthquake was in their father-in-law’s name. Shortly before the earthquake hit, the families filed for property rights. But since the issue of ownership was not settled before July 6, the deadline to sign the contract to receive the grant, they were removed from the beneficiary list. 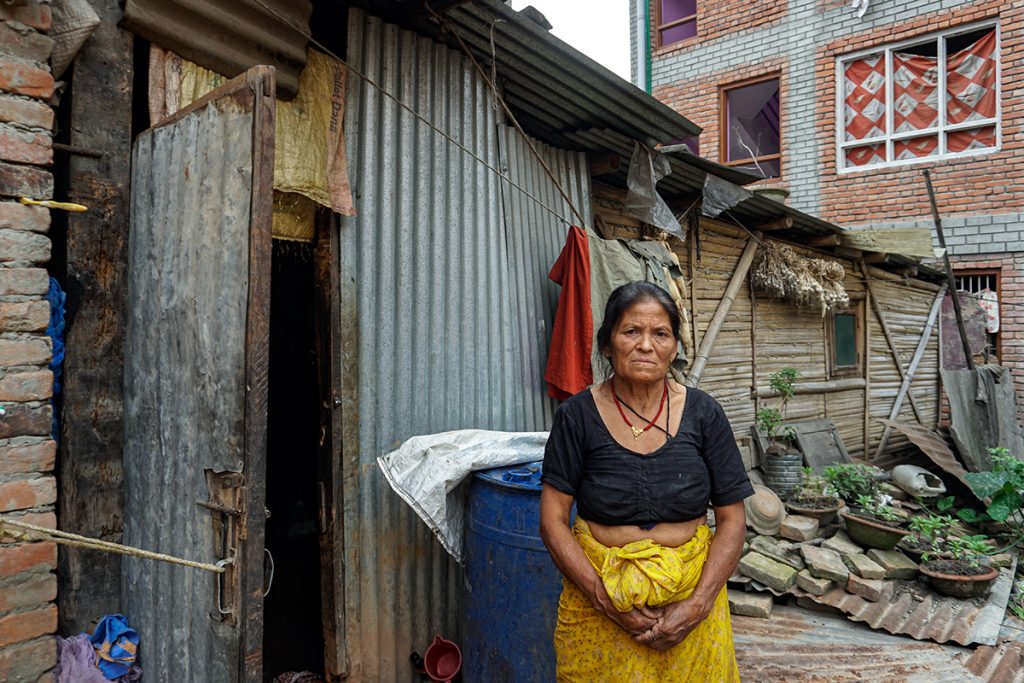 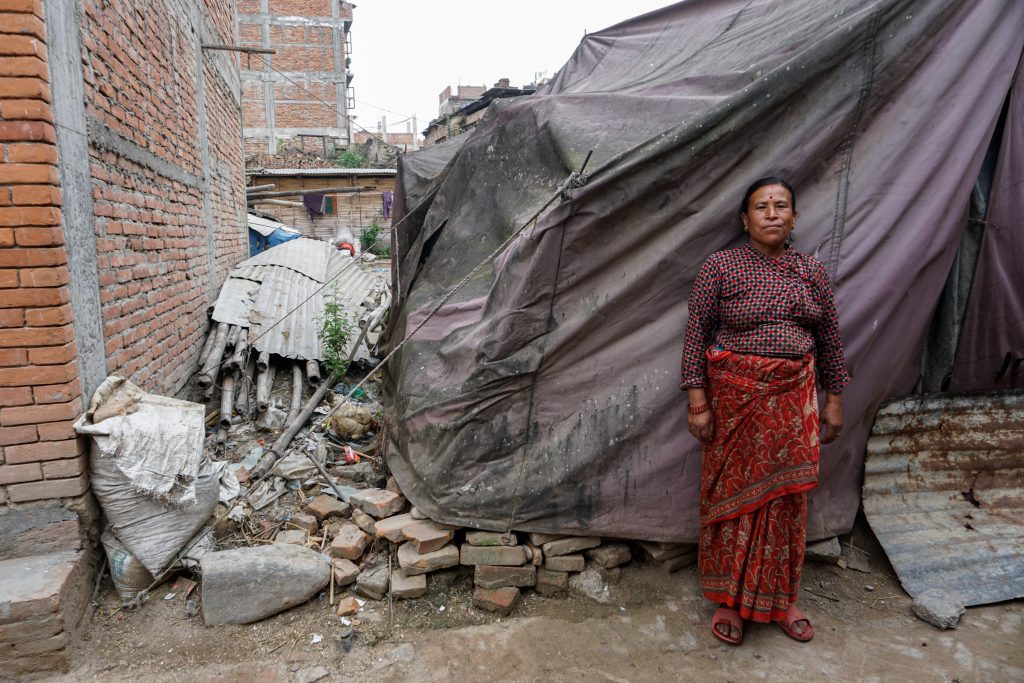 On the left, Gyan Maya Gainju finishes household chores outside the shelter she’s lived in since an April 2015 earthquake leveled her home. On the right, her sister-in-law, Ram Pyari Gainju, stands in front of the tent where her family stayed after the earthquake hit, right next to the unfinished reconstruction of their original house. The two women and their families qualified for the reconstruction grant, but due to an issue with land ownership were unable to sign the contract to receive the grant.

But the Gainju family was not the only family removed. Nearly 63,000 beneficiaries were taken off the list for failing to sign the contract before the July 6 deadline. Families who signed the contract but did not collect their first installment were also removed and barred from collecting future installments.

Even so, government representatives say they are doing what it can to support reconstruction efforts. Now, families that can provide a reason as to why they were unable to sign the agreement will have their cases reviewed.

“The government has taken responsibility to support the reconstruction of houses,” says Chandra Bahadur Shrestha, executive member of the Nepal Reconstruction Authority.

According to Shrestha, nearly 80% of houses in rural districts have been successfully reconstructed with the grant assistance. But in other areas, like the Kathmandu Valley, things are different. He says people are simply not constructing.

In order to build, a family must own a minimum of 65 square meters (700 square feet) of land. He says some people in the city have small plots that do not meet municipality qualifications.

And in urban areas like Kathmandu Valley, it also costs more to build.

“In urban areas, foundation construction is expensive and 50,000 rupees ($438) is not enough,” he says, acknowledging the limitations of the government grant. “But we cannot give additional money. They have to manage somehow.”

Why have so few families received the support they were promised by the Nepalese government after the earthquake? Watch this video to find out. 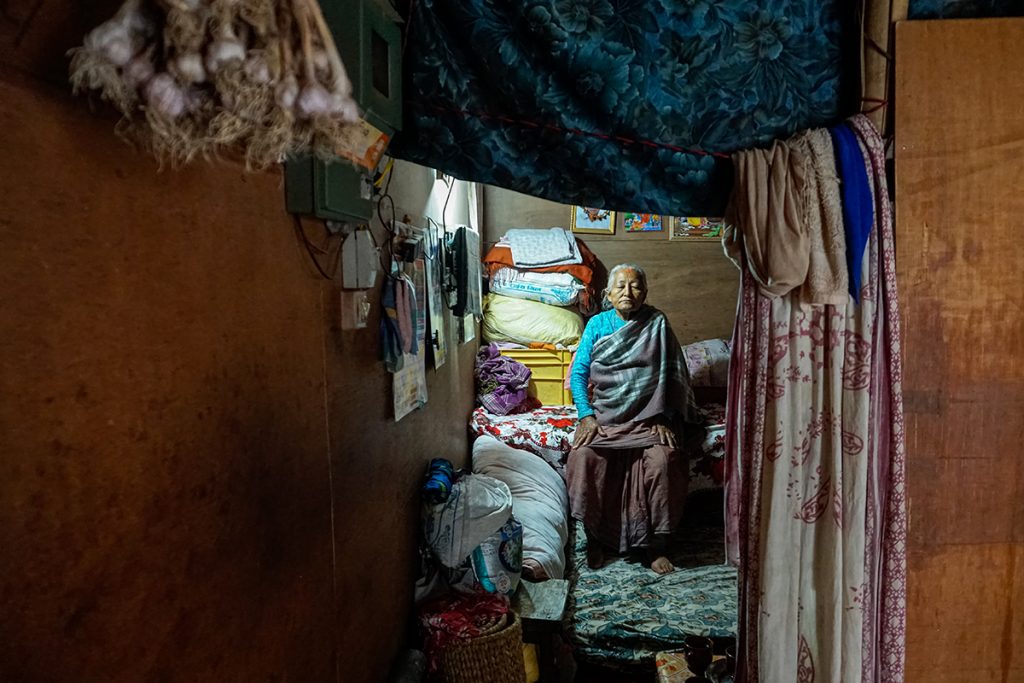 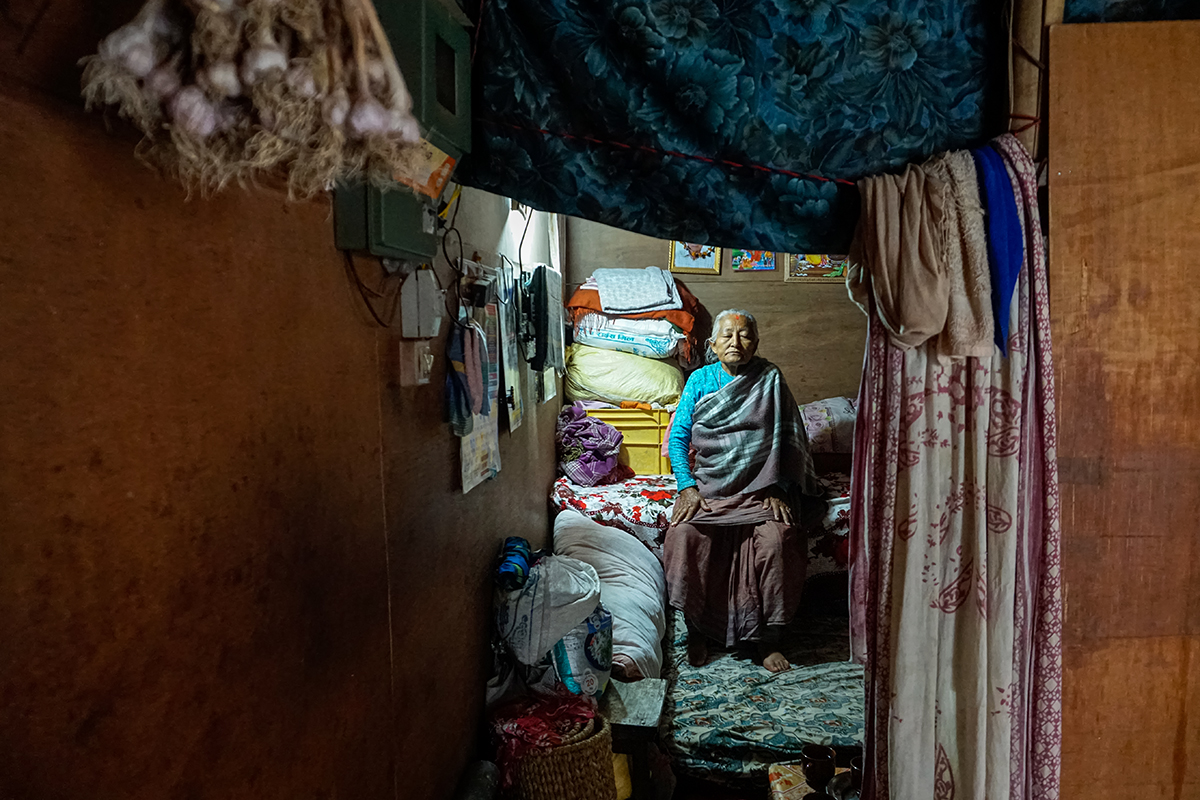 Ratna Mata Bhainatwo rests in the bedroom of her temporary shelter in Jenla, Nepal. She lives alone in this dwelling, since her husband died of an injury sustained from the earthquake, but says her daughters come to visit her.

Ajay Gelal, an engineer with the NRA, adds that building in villages is less expensive because people reuse materials from their damaged homes. He says they also typically build one-story homes.

“In cities, people want to build multiple storied houses and usually the land is in their forefather’s names,” he says.

The NRA surveyed nearly 1 million households in Nepal in 2015 and 2016 who lost their homes to the quake.

Ratna Maya Bhainatwo, 84, received the first installment of 50,000 rupees ($438) but says the money is not enough to build the foundation for her home in Jenla.

“I have no lands to sell and I have no income,” says Bhainatwo, whose husband was struck by a wooden ceiling panel during the earthquake and died of internal bleeding shortly after. “This house is the only property I have.”

Unable to afford the costs of rebuilding, she has lived in a temporary shelter since the earthquake hit. 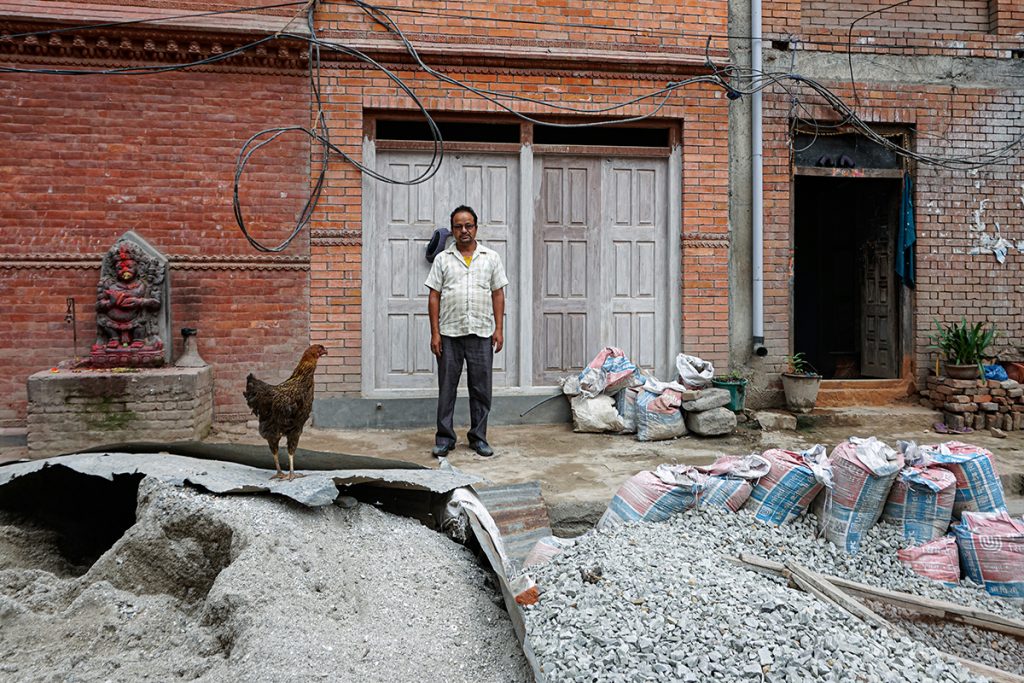 Narayan Prasad Gainju stands outside his new house in Jenla. The house has been under construction since last year and is almost complete.

“We heard that the government will come to take back the money they gave for building the house,” says Chandeshwori Bhainatwo, Ratna Maya Bhainatwo’s daughter. “So, we have kept the money in the bank. We will return the money when the government comes to collect it.”

But Shrestha, of the NRA, says the government “will decide and declare when they have to return the amount.”

He says that this fiscal year, they will focus their efforts on supporting “vulnerable households,” which include men above 70, single women above 65, “handicapped people and children below 16 years.”

Those who qualify will receive an additional 50,000 rupees ($438) to go towards the cost of construction and technical assistance. It’s not yet clear what qualification will entail. He says the government has identified around 18,000 eligible households, adding that they are also seeking solutions to issues related to land ownership.

“We are trying to make a new rule that gives permission for joint housing arrangement,” Shrestha says. “This rule will allow people to combine plots and enable them to reconstruct houses.”

Editor’s Note: A previous version of this story incorrectly stated which fiscal year the government intends to focus aid efforts on “vulnerable households.”