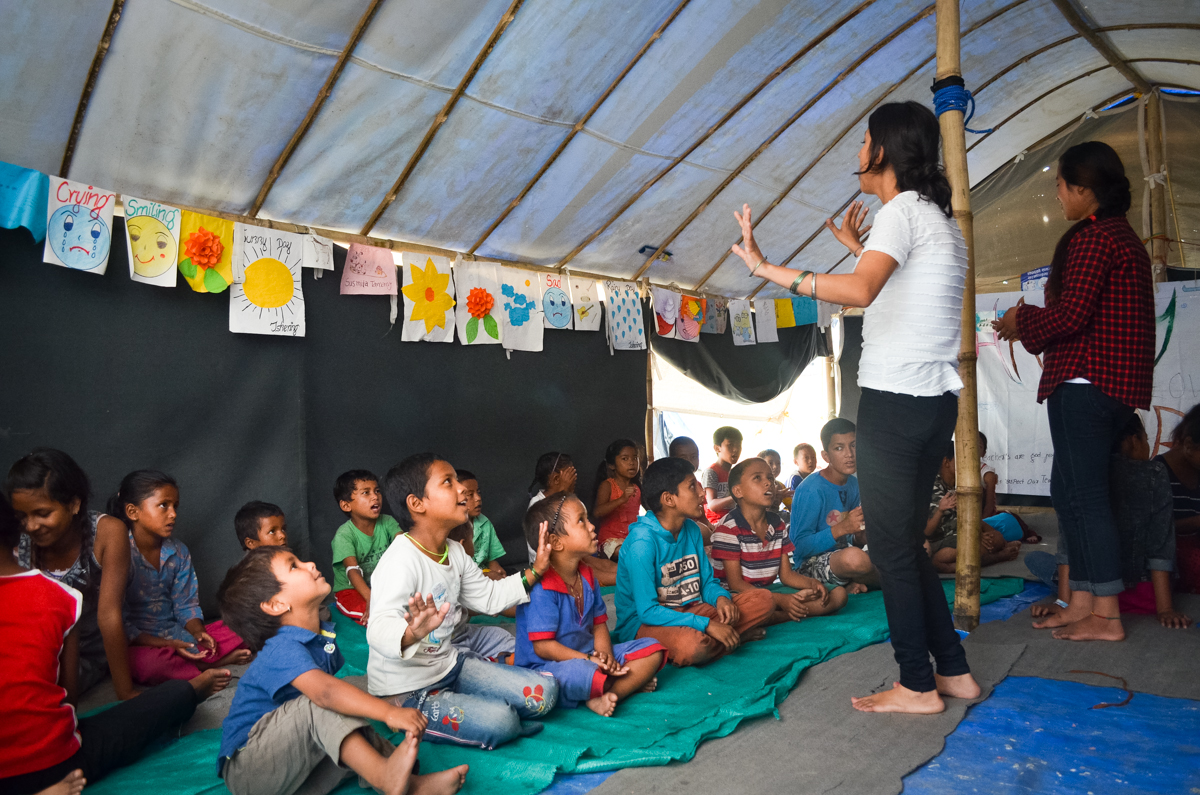 KATHMANDU, NEPAL  ̶  A group of small children play a game tossing pebbles inside a tent in a residential section of Kathmandu, Nepal’s capital. Yujina Shrestha, 2, claps her hands. She begins singing a song, and the children around her erupt with laughter.

Just a few months ago, this toddler sat frozen on her mother’s lap. She refused to speak to anyone, and she wept frequently. But today, she is a different child. She is friendly and outgoing, moving from one child to another and talking easily with children and adults.

Yujina was traumatized by the 7.8-magnitude earthquake in Nepal on April 25 and the subsequent aftershocks, says her mother, Radhika Shrestha.

“Before the earthquake, Yujina used to play with her friends for hours,” Shrestha says. “But after the earthquake, she didn’t play with friends and cried all the time. She would blindly stare at some object and mumble ‘earthquake’ over and over.”

Shrestha, 27, lived with her husband and two daughters in a small rented house in Chuchepati, a neighborhood in Kathmandu. Her husband is a bus driver.

Their house collapsed in the earthquake, and they managed to run outside in time to save their lives, Shrestha says. They lost everything they owned.

After a mega-disaster, everyone is filled with fear, but the fear these children had was quite indescribable. These children thought of nothing but the earthquake. Their condition was pitiable. — Vidhya Bhandari, 21, manager of the children’s tent at Chuchepati grounds

With their neighbors, they moved to public grounds in the neighborhood, an area usually used for sports and picnics. Since the earthquake, the family has lived in a tent there because they can’t afford to rent another house.

The family’s older daughter, 4-year-old Yunisha, behaved normally, but Yujina continued to struggle. Shrestha took her to a special tent reserved for children traumatized by the quake. The tent, set up by a partnership among UNICEF Nepal, Kathmandu’s district education office and Seto Gurans National Child Development Services, is staffed by child-care workers and psychologists. Set up April 30, the tent can accommodate 40 children at a time, and most children there spend the day singing, playing games or working on academics. So far, nearly 300 children have passed through the tent.

There, volunteers explained to Shrestha the effects of trauma on her daughter. They advised her to be patient and loving, and to avoid talking about the earthquake in her presence.

“Seeing the way they behaved with the children, I changed my behavior too,” Shrestha says.

Shrestha says she began to echo Yujina’s baby language to communicate with her. The two sang songs and cuddled.

After a few days, Yujina was drawn into the games and storytelling at the tent, says Vidhya Bhandari, 21, the tent manager.

After about two weeks, Yujina was the happy toddler she was before the earthquake, Shrestha says, smiling.

“We had never imagined that her behavior would change so soon,” Shrestha says. 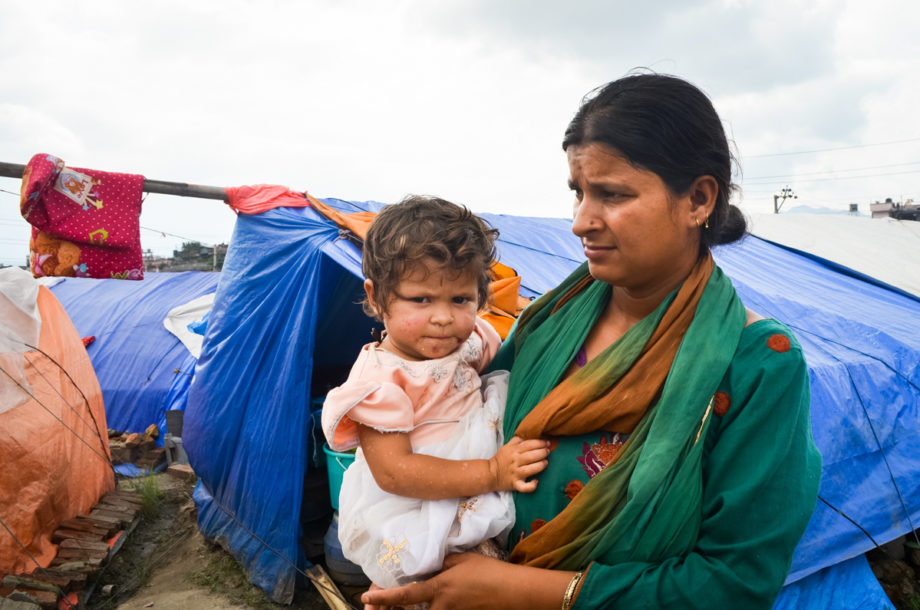 Radhika Shrestha, 27, carries her daughter Yujina outside the tent that is now their home.

Around 1.5 million children were affected by the earthquake and aftershocks, according to UNICEF Nepal. Many children were traumatized by their experiences, and children still living in tents are particularly vulnerable to psychological challenges because their lives have yet to return to normal, months after the quake, says Rupa Joshi, a communication officer at UNICEF Nepal.

The Ministry of Home Affairs estimates that 8,020 people died in the earthquake and that more than 400,000 buildings and houses were destroyed or damaged.

The earthquake was followed by thousands of aftershocks at regular intervals for more than three months, according to the National Seismological Centre. An aftershock of 7.3 magnitude on May 12 caused further damage. The center reports that 395 aftershocks of more than 4.0 magnitude had occurred as of Sunday.

More than 40,000 people still live in tents or temporary shelters made of tin and bamboo, according to the Ministry of Home Affairs.

At least 7,000 families live in 987 tents in Chuchepati grounds, says Asta Bahadur Gurung, head of an informal association of people living there.

These spaces are temporarily run in tents or huts made up of corrugated zinc sheets and can be used for up to two years, Bhattarai says.

Children are being taught the school curriculum and provided with psychosocial counseling, he says. They are also taught yoga and play games, sing and dance.

“Gradually, these spaces will be turned into permanent structures where the government has planned to provide education and counseling to the children in the long term,” Bhattarai says.

For now, staff in the tents and other child-friendly spaces are helping children who struggle with symptoms of trauma that occurred immediately or shortly after the quake.

Thami lived with her mother-in-law and sister in a small house in Kathmandu. Her husband is working abroad, and her sister has been living with them since their parents died.

Thami was feeding their goat when the earth started shaking, she says. She ran inside the house and dragged her mother-in-law and sister outside before the house collapsed, destroying everything and killing the goat. 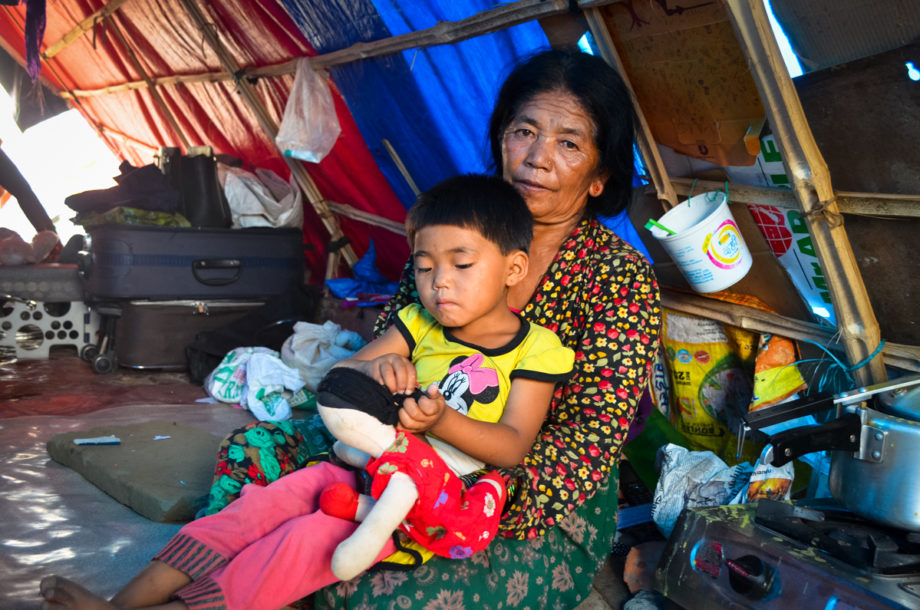 They moved to the Chuchepati grounds and were given a tent where they still live, Thami says.

Bimala did not speak much after the earthquake, Thami says. After two days, she stopped talking entirely and stared at her doll, which had been rescued from the rubble of their home.

Thami took her to Kanti Children’s Hospital in Kathmandu, but the doctors there told her that Bimala wasn’t ill.

She heard programs on Radio Nepal about the psychological effects of earthquakes on people, especially children, and began to understand her sister’s behavior change, Thami says.

She listened carefully to the advice given in the programs and learned to refrain from expressing fear in front of traumatized children, talk to them with love, behave with them as they expect and not leave them alone, Thami says.

She also took Bimala to the children’s tent in Chuchepati about three days a week. After nearly two months, Bimala began to speak, slowly at first but gradually picking up speed until she was speaking as she had before the earthquake.

“I had thought that my sister had lost her voice forever,” Thami says.

Everybody is psychologically affected after a great disaster, says Madhu Bilash Khanal, a psychologist at the Centre for Mental Health and Counseling – Nepal. Khanal is not involved with the children’s tent.

“But children are more vulnerable,” he says. “Because everywhere they look, they see dead bodies, rubble of destroyed houses, and they too are directly affected by the continuous shaking of the earth due to repeated aftershocks.”

Since the earthquake, Khanal has traveled to dozens of villages in the 14 districts of the country most affected by the earthquake with a small team, he says. There, he has been providing psychosocial counseling to severely traumatized children and creating awareness in the village about mental-health issues that can arise after trauma. Depression, anger, anxiety disorders and inability to socialize with other children are some of the common problems he has observed in children.

“Everyone talks about the earthquake all the time, so children hear about it all the time,” Khanal says. “So they could develop irrational fear, which could result in unexplained anger, crying, screaming and lack of social interaction.”

Families are already stressed because of the difficult life inside the tents, he says. Parents cannot provide the routine or care they used to give children living in their homes, and this heightens the fear and psychological problems among children.

Children who have been traumatized by the earthquake urgently need care, Khanal says.

“If children aren’t provided with proper counseling, their behavior can change permanently,” he says.

In the long term, if left untreated, the trauma can lead to depression or antisocial behavior, Khanal says.

Families living in cities and urban areas have access to hospitals and psychosocial counselors, Khanal says. But it’s different in rural areas.

“Most of the people living in rural areas are unaware of mental problems,” Khanal says. “In many cases, we hear of parents taking their children to witch doctors, fearing their children were possessed by evil spirits.”

Bhandari says almost all the children she met were traumatized by what they had experienced.

“After a mega-disaster, everyone is filled with fear, but the fear these children had was quite indescribable,” she says. “These children thought of nothing but the earthquake. Their condition was pitiable.”

Bhandari has taken a break from her banking studies and wants to work with the children at Chuchepati until people move out of the tents.

“If I can work to make the future of these children better, I could bring smiles to the faces of hundreds of parents,” she says. “And these children will be able to help hundreds and thousands when they grow up.”

But little Bimala does not plan on moving out from the tent in Chuchepati.

“The earthquake destroyed everything in our village,” the 3-year-old says. “Tents are stronger than houses. I will always live in tents.”

Kalpana Khanal and Madhu Bilash Khanal are not related.