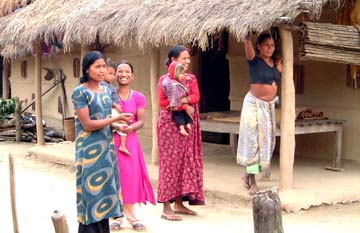 KANCHANPUR, NEPAL – Even before Phoolmati Chaudhary, whose name has been changed to avoid family conflict, was born, her parents had already arranged her marriage to a friend’s son.

Arranged marriage is a custom of Nepal’s Tharu people group, which Phoolmati’s family belongs to.

Now, 15 years later, the teenager from Nepal’s Far-Western district of Kanchanpur says she became depressed when she found out about her engaged status as she now has a boyfriend whom she dreams of marrying.

“When I confronted my parents [and told them] that I didn’t want a marriage that was fixed before my birth, they didn’t listen,” she says as she draws circles on the barren earth with her bare toes. “They continued to pressure me [into the marriage].”

The teenager says that the boy her parents arranged her marriage to began to follow her around and pressure her to marry him.

“[I have found out that] he has some bad habits,” she says of his drinking and gambling tendencies. “I don’t want to spend my life with someone like that. But my parents seemed to be worried about their promise to their friends and the society rather than my wishes.”

Phoolmati says that her family also doesn’t know she has a boyfriend whom she loves and wants to marry.

“Should they come to know about it, I’ll be in trouble,” she says, her tone filled with dread and discomfort.

Faced with continued pressure from her parents, Phoolmati says she eventually threatened to commit suicide if her parents forced her to marry the boy. She says that her parents relented and brought her to Kathmandu, the capital, to let her stay with relatives.

Her relatives are now trying to get Phoolmati, who lacks basic literacy skills, into school. Her parents have also promised that they’ll now let their daughter make her own decisions about marriage and family.

Nepalis say the arranged marriage tradition – known as “mangni” – developed from parents’ desires to protect their children from unsuitable marriages and to strengthen relationships with friends. But the tradition is on its way out as many young people from the Tharu community have rejected the marriages their parents arranged for them when they were infants or even in the womb. Although the custom is still prevalent in some areas, opponents say it’s fading as one government committee works to stamp it out.

The custom of parents arranging the engagement of unborn or young children with the children of their friends is known as mangni. Rajendra Prasad Chaudhary, regional member of the Tharu Welfare Assembly, an NGO that addresses social issues in the Tharu community, says that the mangni trend gained momentum around 1943, especially in the Terai and inner-Madesh districts in Nepal, and later developed into a tradition. But he says it has now largely diminished among the country’s 3.3 million Tharus because of increased objection from the younger, more educated generation.

Chaudhary, who lives in Dang, a district in Nepal’s Mid-Western region with a large Tharu population, says that a Tharu custom dictates that if a person’s son elopes with someone else’s daughter, the parent has to give one of his or her daughters in marriage, irrespective of how young she is, in exchange to the family who “lost” their daughter in the elopement. He says that this may have led to a surge in the mangni tradition so parents could protect their daughters from being taken from them.

Phool Man Chaudhary, a senior member of the Tharu community in Dang, says that this exchange of daughters for daughter-in laws might have arisen from the scarcity of women in Tharu communities in the past. Community members say there isn’t a confirmed or specific reason for the scarcity.

“Because women were very scarce in the past within Tharu communities, people were scared that their sons wouldn’t get brides,” Chaudhary says. “And so the exchange tradition came into existence.”

Chandra Prasad Tharu, also part of the Tharu Welfare Assembly in Dang, says that the exchange tradition was so extreme that if a family’s daughter-in-law died, the family could bring their daughter it had married off to the daughter-in-law’s family so that they could exchange her for another daughter-in-law from a different family for their son to marry.

“And if the son died, the younger brother was to marry his sister-in-law,” Tharu says.

Although some people view the mangni tradition as rooted in Tharu culture, Surendra Chaudhary, who works for the United Nations Development Program in Kathmandu, says that this tradition has little to do with the Tharu community. She says it has more to do with strengthening bonds between family friends in an attempt to progress from friends to relatives through their children’s marriage.

“This is some emotional thing,” Chaudhary says. “I wouldn’t define this as a custom. This doesn’t exist now where people are educated. And I, [despite being a Tharu], didn’t follow this practice.”

Rajendra Prasad Chaudhary says that others have followed suit, as many parents have now stopped pressuring their children into arranged marriages.

“They now want their children to be happy,” he says.

He says his mother arranged his marriage when he was 10. But he says he refused to go through with it.

“I insisted on studying, and thus I finished my master’s in political science from Tribhuvan University,” he says.

He says that he wanted to avoid succumbing to the same trajectory as his friend, who got married in eighth grade to the girl his parents had promised him to and consequently discontinued his studies the next year.

“His wife was four years elder to him and didn’t let him go to school,” he says. “She [would hide] his books, and after a while, my friend started failing his exams. Eventually he discontinued his education.”

Mankali Chaudhary, who requested her name be changed for privacy reasons, is from the same district as Phoolmati and has a similar story to share. She says that by the time she was 5, her father had already chosen a husband for her.

Mankali, just 15, says that her family initially pressured her to honor the engagement to the man, who is now 25. But she says she has also been able to convince them that she will not marry the man.

“Just because my father and the boy’s father liked each other [enough to want to get their children married] does not mean the boy and I would like each other as well,” she says, laughing.

After analyzing the negative effects of the mangni tradition and the exchange of daughters for daughter-in-laws, the Tharu Welfare Assembly initiated a counseling program in the villages in 1977 explaining the evils of this practice, Rajendra Prasad Chaudhary says. With the help of the District Administration Office, police also took people who were engaged in this practice into custody for four to five days to discourage others from this practice.

Initiatives aimed specifically against the mangni tradition have been rare since, but the general increase in literacy and education throughout the years has helped to nearly eliminate this practice. It is still prevalent in some areas, though.

Journalist Lucky Chaudhary says that this tradition still exists among 10 percent of the population in the “backward” and illiterate communities of Kailali and Kanchanpur in western Nepal. Chaudhary says that since the Tharus and Chaudharys – part of the Tharu community – live in joint families, they want domestic helpers rather than wives for their sons so they marry their sons to women eight or nine years older than them.

A joint Tharu family can have up to 40 members, and because of the lack of people willing to do the household chores, parents marry their 10-year-olds to 18-year-old women, Chandra Prasad Tharu says.

But Krishna Raj Sarwahari, who works in the media and is also a researcher on Tharu culture, says that trends regarding this tradition are changing. He says that if someone breached the mangni agreement in the past, a senior leader in the village called both the families, and, after discussions, the party who was found guilty of breaking the verbal contract was fined.

“But today, the traditions have changed,” Sarwahari says. “No fines are paid. Instead the parties demanding the fine are subject to legal action. Even because of the legal issues involved today, people are increasingly discontinuing this tradition.”

Nabodita Chaudhary, who represents the Tharu community in Nepal’s Constituent Assembly and serves as chairwoman of its Committee for Determining the Base of Cultural and Social Solidarity, says the committee is committed to ending this practice. She says that the tradition is evil because of the psychological pressure it puts on young people and violates their rights.

Chaudhary says that the mangni tradition affects women most. But she says that most of these cases are still undercover because women are afraid to raise their voice because of illiteracy and lack of awareness.

“They are too fearful that they’d harm their family’s position and status in the society,” she says. “That’s why they’re sucking it up.”