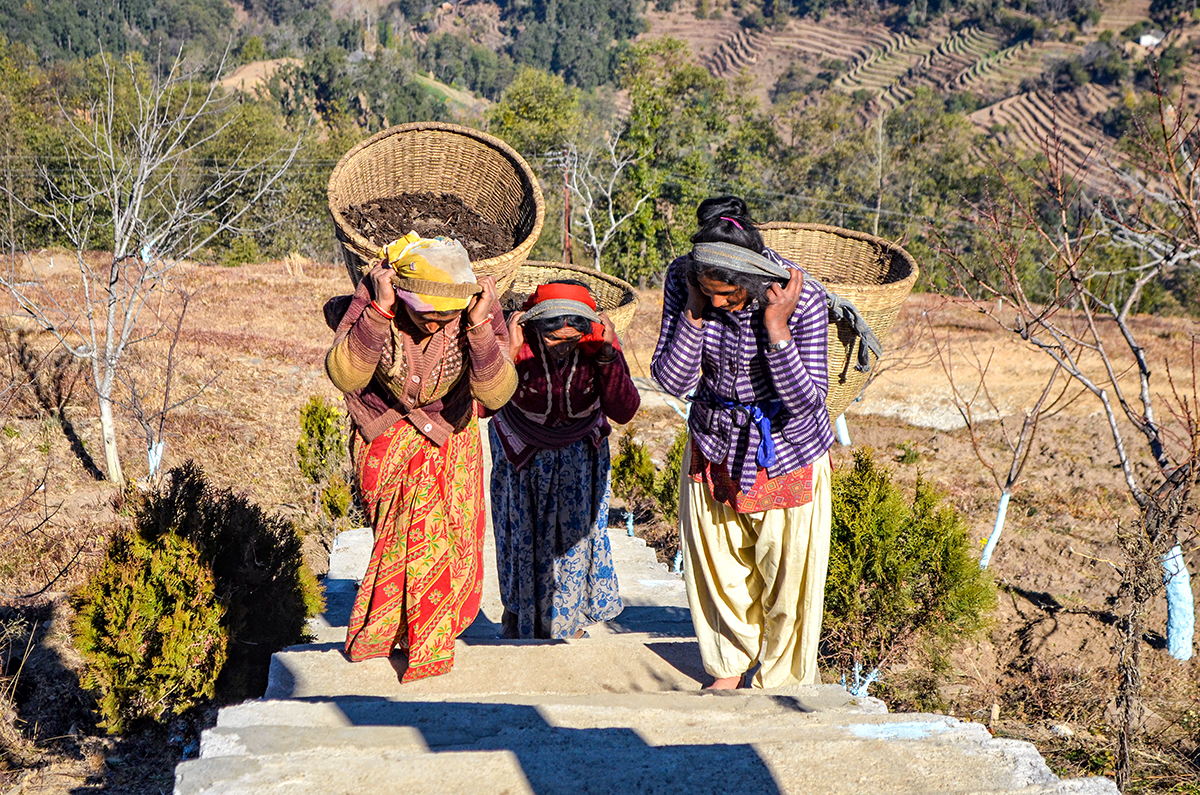 BAITADI, NEPAL — For 40 years, Ganesh Datta Bhatta has lived and worked as a farmer in the Dasharathchand municipality in Nepal’s western Baitadi district.

His home and his walnut and almond nursery sit on a hill that, 20 years ago, used to be covered in snow at this time of year. Up to five feet of snow would fall between December and February.

Farmers would use melted snow and ice to water their cattle and their crops. Those crops included apples, which were sometimes exported to India.

Many farmers, including Bhatta, can no longer grow apples.

“The weather is not like it used to be earlier, so I have changed my farming practices,” he says.

Bhatta says he is now fortunate to be able to produce lemons, walnuts and almonds. 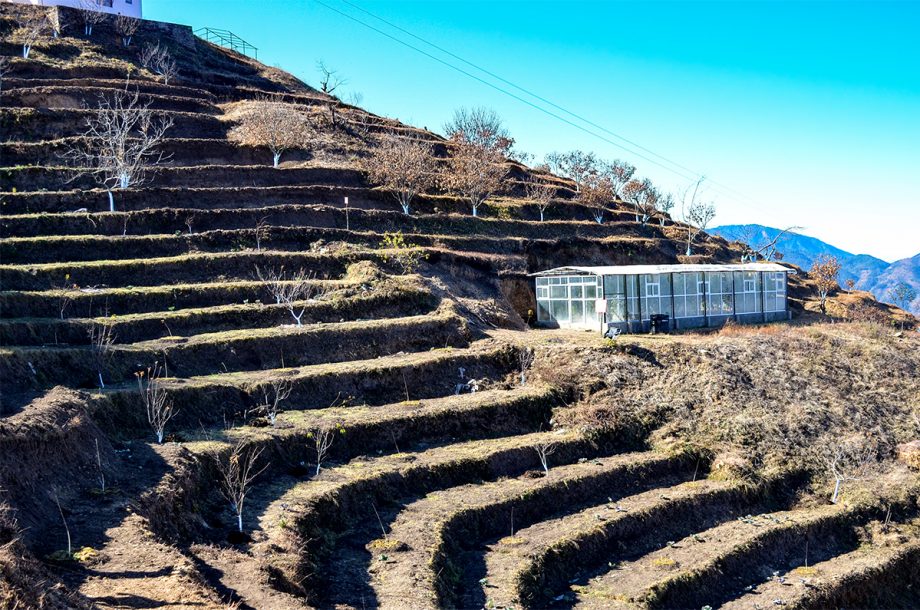 In Baitadi district, a remote area of Nepal, the land now occupied by the Dry Fruit Development Center was once covered in snow.

Rural farming businesses are folding as temperatures rise across Nepal. While a government training program is helping some farmers to grow crops better suited to changing climatic conditions in their communities, local experts say national policies and longer-term solutions are needed to make the country’s agricultural sector climate-resilient.

Globally, population growth is leading to higher food demand. While enough food is produced across the world to feed the global population, experts warn that many could be left without food if production does not increase.

But climate change is limiting food production options for farmers globally. In Nepal, which was one of 195 countries that signed the 2015 Paris Agreement to control global warming, some farmers say shifting weather patterns prevent them from growing indigenous crops.

In a 2016 government survey on climate change, 86 percent of surveyed households reported experiencing drought as a result of climate change in the past 25 years, while nearly 85 percent experienced up to four-week delays in the arrival of the monsoon season, which typically starts in June and ends in August.

The weather is not like it used to be earlier, so I have changed my farming practices.Ganesh Datta Bhatta

Over the past 25 years, some Nepalese farmers have increased their use of inorganic fertilizers to cope with climate change, according to the report. But experts say such coping strategies are unsustainable.

Officials from the government’s Fruit Development Directorate, a division of the Ministry of Agricultural, Land Management and Cooperatives, are training farmers in 22 districts on how to increase crop yields and cultivate crops well-suited to the climate in each of the districts, says Ramita Manandhar, program director. The training, which has been offered for a decade, is held once a year, she says.

Draupati Pandey, a farmer living in the Dasharathchand municipality, says she works on the government-owned farm and earns 400 rupees ($3.82) a day.

Before she started working on the farm in 2008, Draupati Pandey says she only produced enough crops to feed her family of six, due to weather changes and low-quality soil. 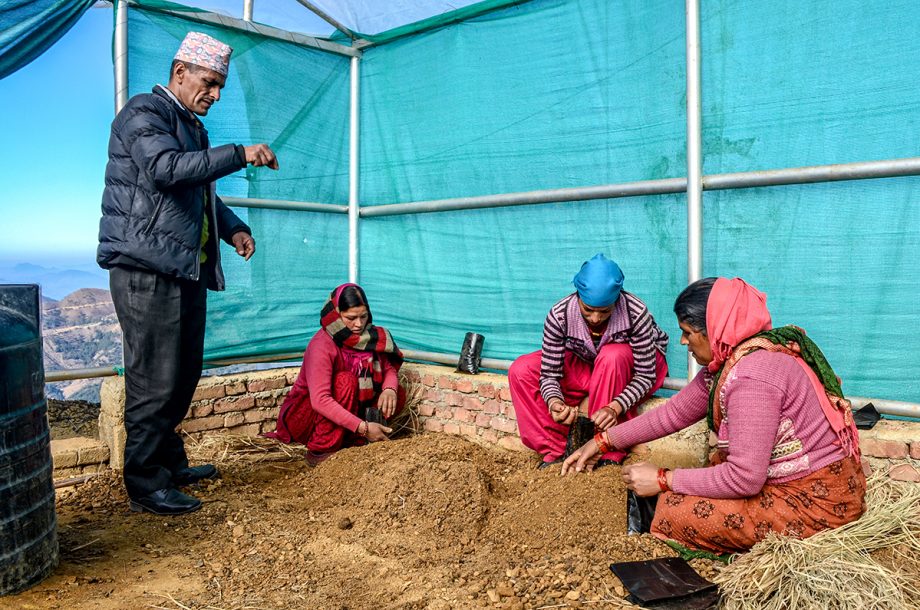 Laxmi Datta Pandey (from left), a horticulture development officer at the Dry Fruit Development Center, works with Pashupati Dhami, Maya Bhatta, and Draupati Pandey. There are 15 workers who tend to the farm.

Bhatta, the farmer who also lives in Dasharathchand, opened his nursery in 2008 when the training first began. He says he earns up to 400,000 rupees ($3,825) a month from selling lemons, walnuts and almonds to buyers, including the Fruit Development Directorate and farmers in other districts.

But not all farmers have received training, says Birendra Bhatta, a farmer who lives in Shreekot, a village in the Baitadi district. Some rural farmers are leaving the country to seek employment as a result, he says.

“Farmers will continue facing the consequence of climate change until the program targeted at farmers in rural villages is brought,” he says.

Laxmi Pandey says the government’s training program is still expanding to different parts of the country.

Still, some say that changing the types of crops farmers grow is merely a short-term coping strategy.

Due to climate change, over 5,000 sources of water across the country have dried up. Irrigation technologies are out of reach in some communities, forcing farmers to rely on rain, which can be irregular, says Ang Tshering Sherpa, chairman of the Climate Alliance of Himalayan Communities.