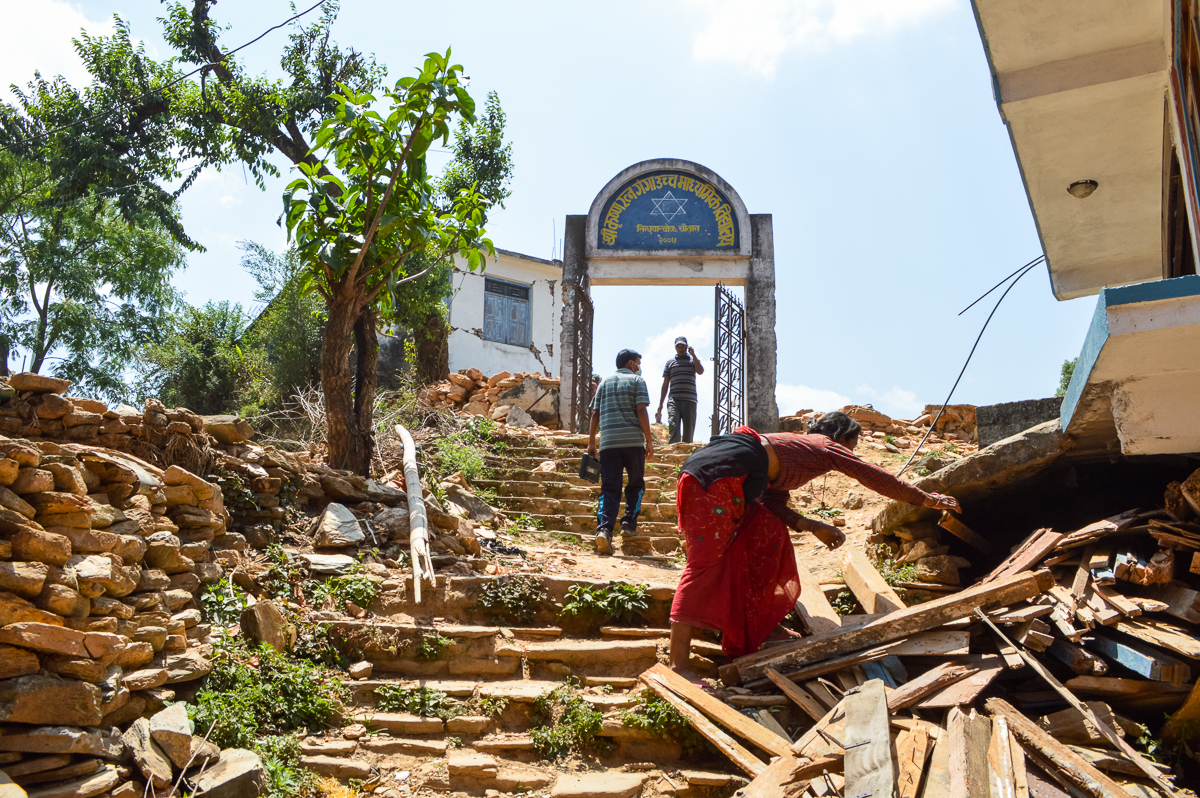 SINDHUPALCHOWK, NEPAL — Rabina Sapkota, 16, was so engrossed in a children’s magazine on the terrace of her two-story house that she was slow to realize she was in an earthquake.

“The house started shaking,” she says, playfully twirling her fingers in her long hair as she recounts her experience on April 25, 2015, when a 7.8-magnitude earthquake hit Nepal.

“I heard people crying downstairs,” she says, a serious expression entering her face as she stops playing with her hair.

She ran downstairs and found her mother, sister and neighbors crying.

“Everyone was crying, and I started crying too,” she says.

Sapkota’s family, which runs a small restaurant on the ground floor of the family home, was unharmed. The family’s house in Chautara, the headquarters of Sindhupalchowk district, was not damaged.

But all around their neighborhood, houses and buildings had collapsed.

Four days after the earthquake, Sapkota and her sister Rajina, 13, went to their school, Shree Krishna Ratna Ganga Higher Secondary School in Chautara, to see how it had fared.

“I felt like crying when I saw my school,” Sapkota says. “I thought, ‘I would have died if I was in school that day.’”

The earthquake destroyed the two multistory buildings on the school campus. Only a single-story building comprising four classrooms remained.

Schools in 50 districts of Nepal remained closed for more than a month after the April earthquake, keeping more than 4 million students out of school. Instruction continued in the other 25 districts.

A second quake, a 7.3-magnitude temblor, struck Nepal on May 12. Since reopening on May 31, schools in earthquake-affected districts like Sindhupalchowk have struggled to return to normal. With most school buildings destroyed, students are attending classes in temporary learning centers made of bamboo and tin. Many must continue their studies without textbooks, science equipment, computers and other teaching materials destroyed in the quakes.

Older students who are sitting for the School Leaving Certificate, or SLC, a nationwide exam that determines eligibility for higher secondary education, fear the disruption in their studies will hurt their performance.

In 50 of Nepal’s 75 districts, the April and May earthquakes and many aftershocks damaged 43 percent of the schools, according to the Ministry of Education. In Sindhupalchowk district, 98 percent of schools buildings and 99 percent of classrooms were destroyed or badly damaged, according to the ministry.

About 14,000 children in 16 earthquake-affected districts attended school the day classes resumed, according to UNICEF Nepal.

Sapkota and her sister were among them.

Temporary learning centers, made of bamboo sticks and tin sheets, dotted the school campus. These earthen-floor structures will be their classrooms for the foreseeable future. 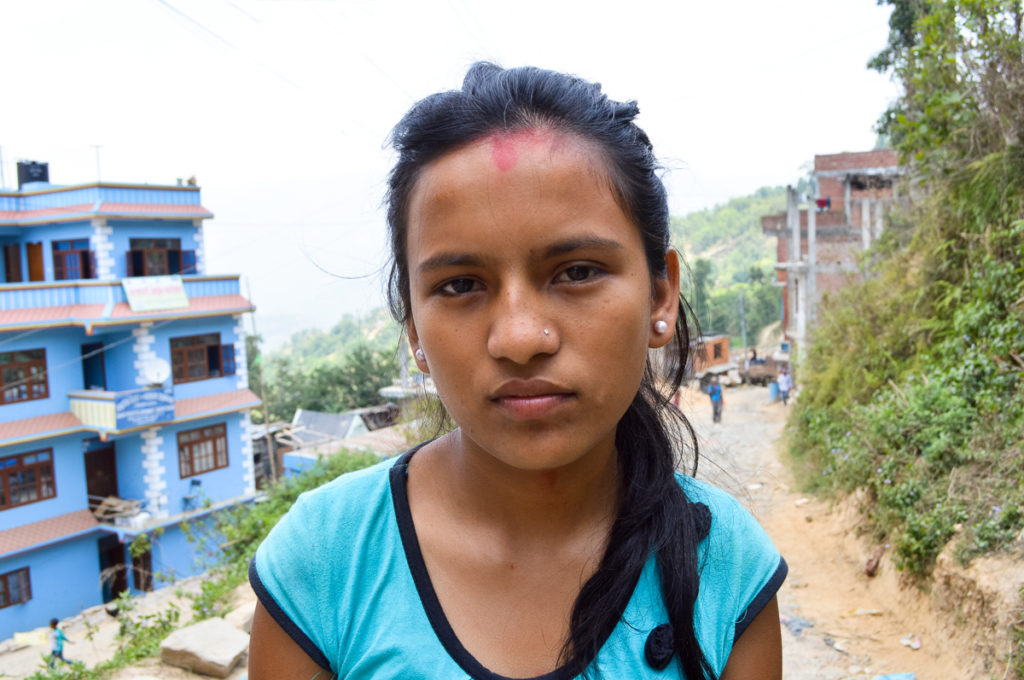 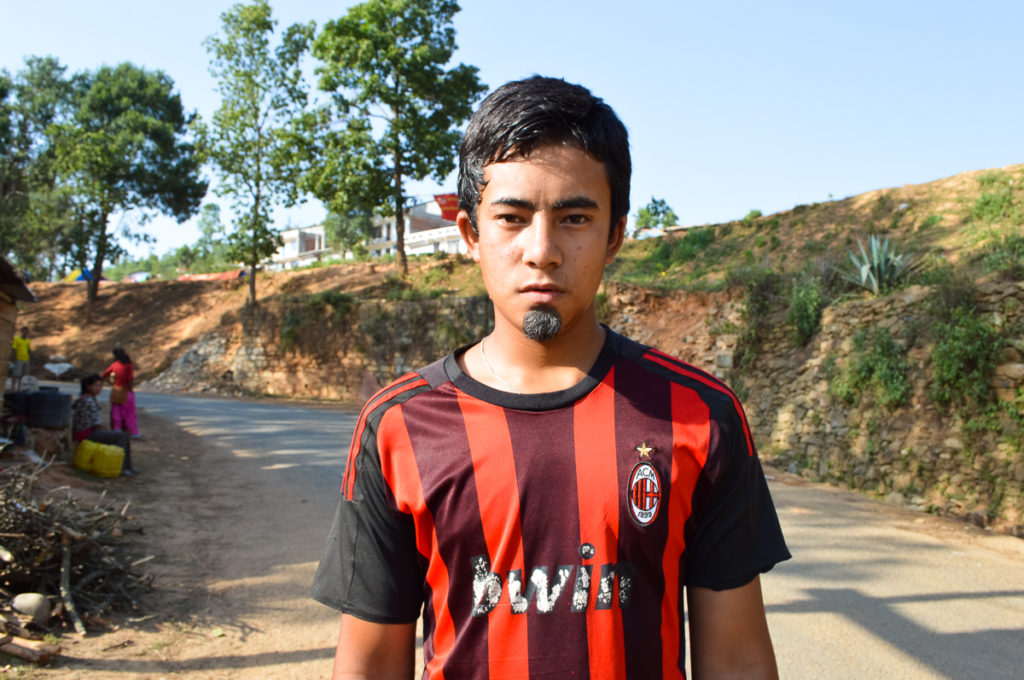 Pradip Katuwal, 16, attends 10th grade 10 at Jana Jagriti Higher Secondary School in Sindhupalchowk district. “When I saw my school, the first thought that crossed my mind was that my School Leaving Certificate examination is going to get affected,” he says. 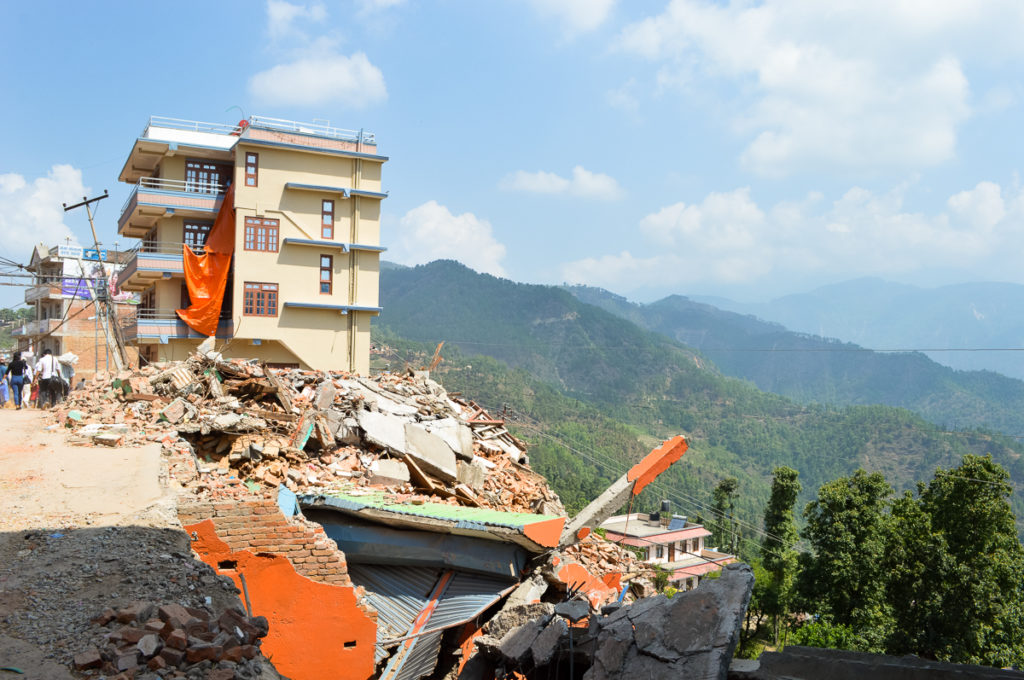 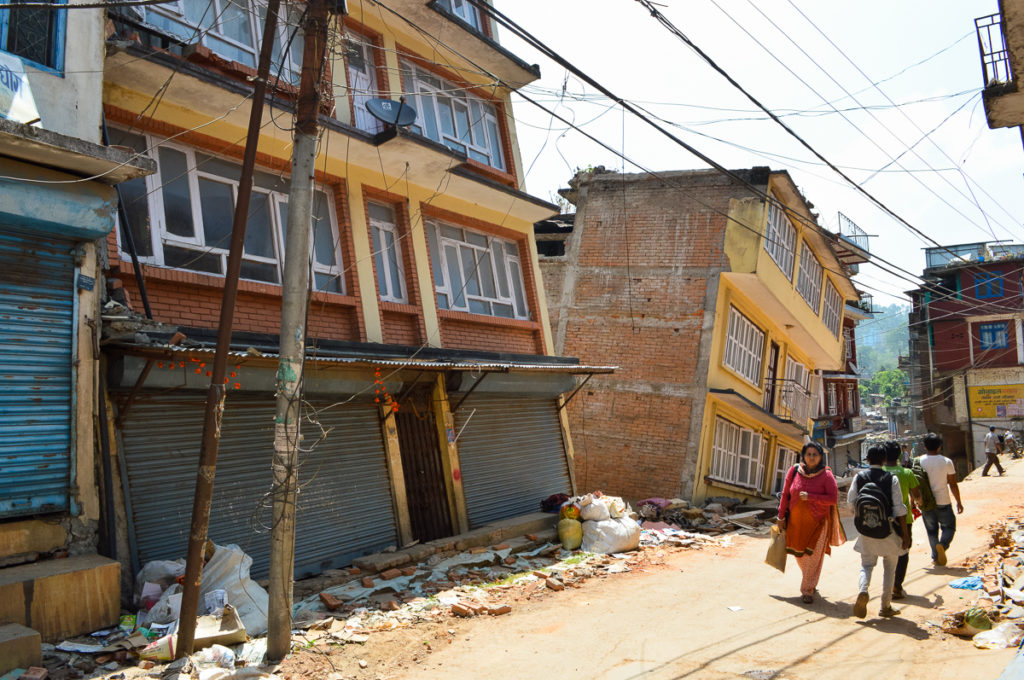 The earthquake rendered most homes in Chautara, Sindhupalchowk district, uninhabitable. 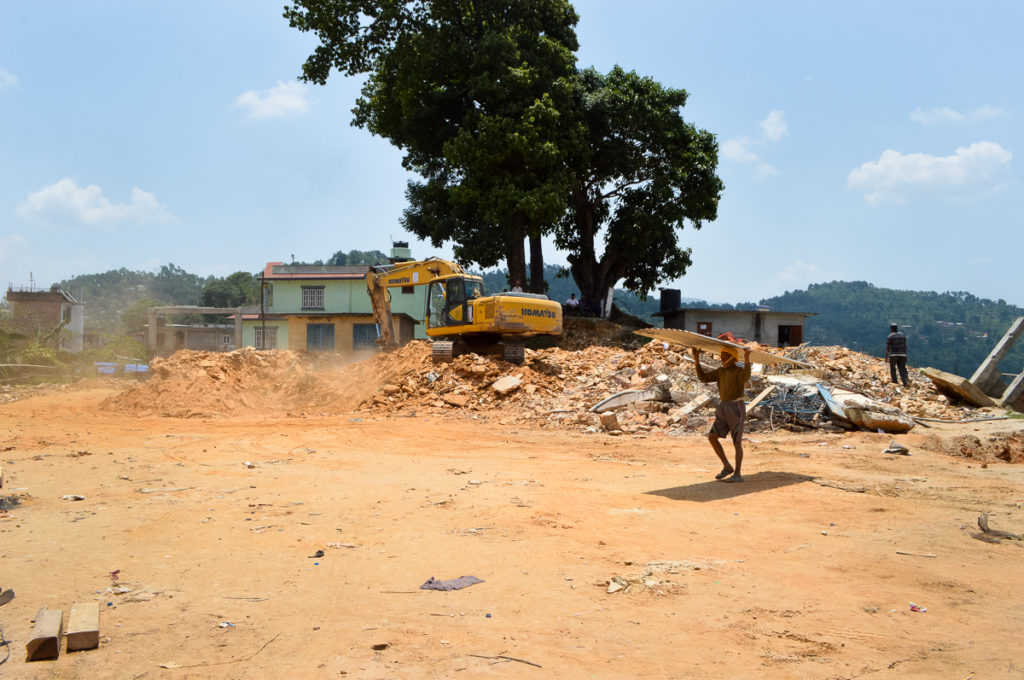 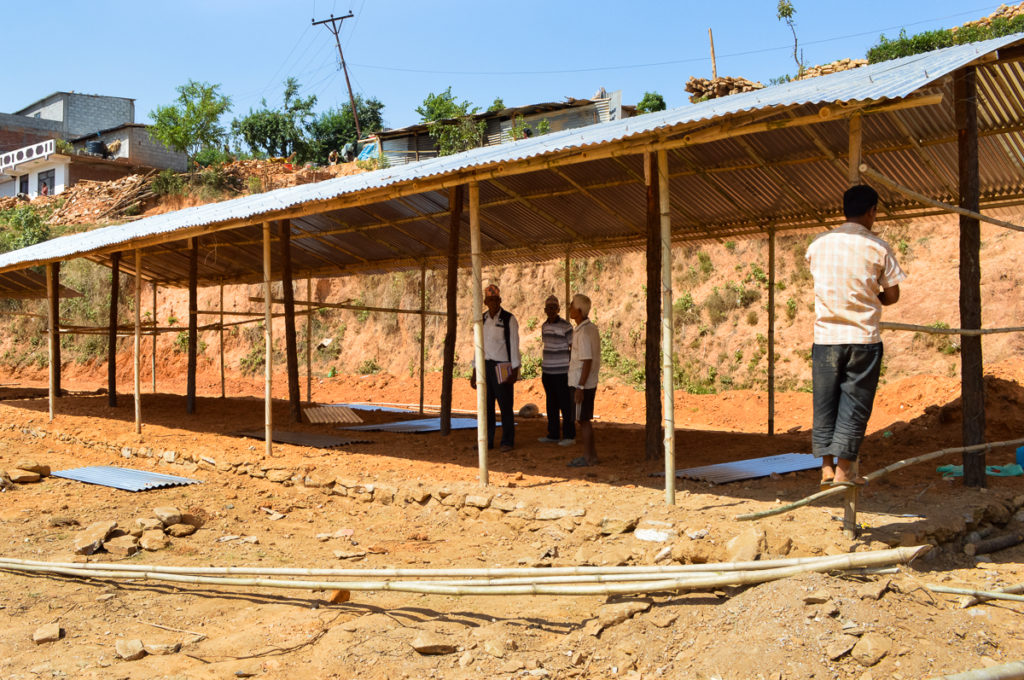 Temporary learning centers made of bamboo and tin are being built on the grounds of Jana Jagriti Higher Secondary School, Sangachok. Thirteen have been constructed. 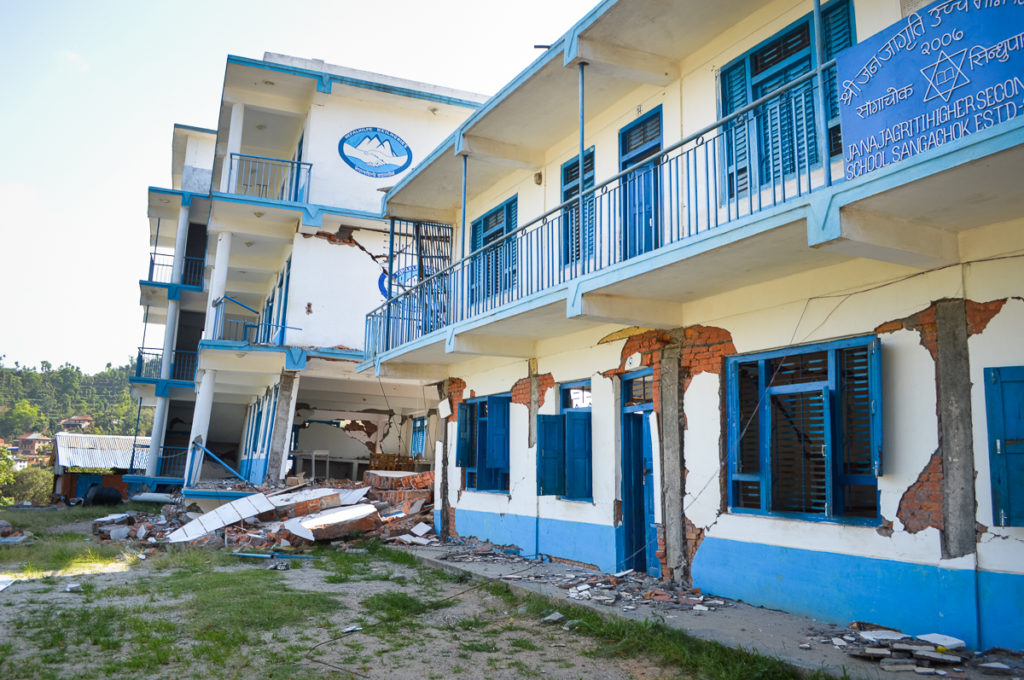 The April 25 earthquake and its aftershocks destroyed buildings of Jana Jagriti Higher Secondary School, Sangachok, Sindhupalchowk. The school held classes in a nearby forest until temporary learning centers were constructed. 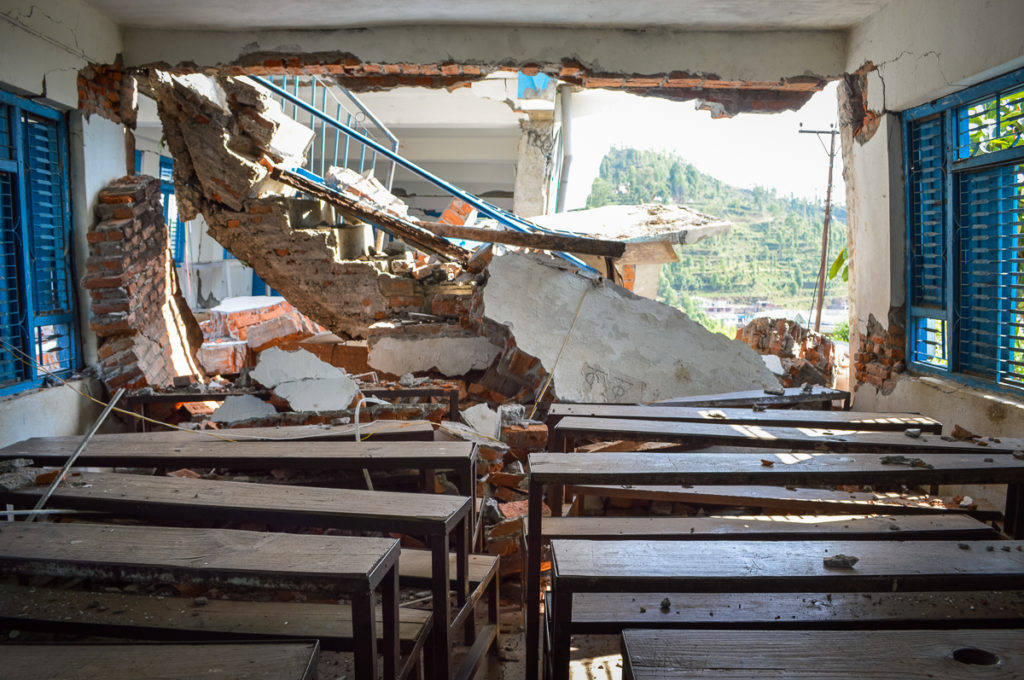 In Sindhupalchowk district, the ministry has allotted 89 million rupees ($870,000) to build temporary learning centers, repair buildings, fix water and sewage lines, and clear rubble. It also is providing 11 million rupees ($111,000) for textbooks and 64 million rupees ($629,000) for school uniforms and bags.

The government has not imposed strict building requirements for the temporary learning centers. They are to measure 5 meters (16 feet) by 12 meters (39 feet) and be constructed of local materials, Puri says.

Sapkota’s school has 19 temporary learning centers, built with government funds and donations from an aid agency and a local political party. Each center comprises one classroom, and each classroom serves two sets of students per day; the first shift runs from 6:30 a.m. to 10:30 a.m. and the second from 11 a.m. to 4 p.m.

Before the quakes, the school taught more than 1,300 students in 32 classrooms.

In the same district, in Sangachok village, 16-year-old Pradip Katuwal went to school eagerly when classes resumed. But to his surprise, the students were taken to the forest adjoining their school for classes.

“It felt different,” says Katuwal, a 10th-grader. “I didn’t feel like I was in school. I had no books and no uniform.”

The principal of Katuwal’s school, Jana Jagriti Higher Secondary School, says it’s not safe for students to be in the school compound.

“The damaged buildings have not been demolished,” Principal Padam Parajuli says.

The school has built 15 temporary learning centers on the school grounds, and it plans to build 10 more. Parajuli hopes the structures will serve for at least three years.

He acknowledges that conditions in these centers are not ideal.

“We are thinking about having classes early in the morning because it is too hot during the day,” Parajuli says.

Some students are sad to lose their school grounds to the temporary learning centers.

“We used to play football on the grounds during break time,” says Umesh Shrestha, 15. “Now we have no place to play.”

“About 80 percent of the students have no books,” Parajuli says. “Teachers are making students take notes because many have no textbooks.”

Katuwal and his family lost their house in the earthquake. They are living in a tent made of plastic sheets.

“All my belongings, including my books and uniform, were buried,” he says.

His friends helped him to salvage some schoolbooks from the rubble of his home.

Next March, Katuwal will take the School Leaving Certificate examination, or SLC.

Because schools were closed for a month, Katuwal is concerned about completing his studies in time for the exam. Teachers may have to find ways to make up for lost time, he says.

“I hope they don’t teach fast,” Katuwal says. “It will be difficult for us to understand.”

All schools that reopened on May 31 started the new session with psychosocial counseling – activities that included discussions, artwork, singing and dancing.

Puri believes counseling is essential in the wake of the earthquakes.

“It is not a normal situation,” Puri says. “Counseling will help students and take them to normalcy.”

The Ministry of Education, UNICEF Nepal and other nongovernmental organizations are training teachers in psychosocial counseling. As of the end of May, more than a thousand teachers had gone through the training, and more than 19,000 others were yet to train, according to UNICEF Nepal.

Sapkota, also a 10th-grader preparing for the SLC exam, is unhappy about spending precious school hours in counseling activities.

“I want to study,” she says, a determined look on her face.

Sapkota’s mother, Gayatri Sapkota, is afraid to send her children to school.

“I fear that there will be another earthquake,” she says. “I worry about my children when they go to school.”

Resuming classes, even under difficult conditions, is vital to the students’ wellbeing, experts say.

“Even if it is a temporary setup, the times that children spend in school are the times they are not exposed to risks like trafficking,” says Tomoo Hozumi, UNICEF Nepal representative. “Schools have functions of enhancing protection of children.”

When a disaster strikes, educational needs often take a backseat, he says.

“Food and shelter are important,” Hozumi says. “But at the same time, education cannot wait. Education needs to be focused throughout the stages of emergency responses, right from initial grief period, rehabilitation and reconstruction.”

Disruptions in schooling can have long-term effects.

“The longer the children are out of school, the higher the risk is for them not to come back to school forever,” he says.

But some teachers are unsure if all of their students are ready to resume their studies.

“Students do not have food and shelter,” he says. “Education is secondary. Their primary requirements have to be met for them to concentrate on their education.”

Students who have lost loved ones and homes have trouble concentrating on their studies.

Shyam Lal Shrestha blames the government for the slow recovery of the education system.

“The government’s presence is not felt,” he says. “They have not done anything to help.”

But Bishwa Prakash Pandit, secretary of the Ministry of Education, says the government is working on short- and long-term plans to rebuild the education infrastructure.

He is hopeful that all the necessary temporary learning centers will be built “soon.”

“Schools should be open,” Pandit says. “All teachers must come to school because temporary learning centers have to be built and a teaching and learning environment has to be created.”

He believes it is important for students and schools to go back to their normal routines.

The ministry’s short-term plans include distributing textbooks to students.

The long-term strategy is to rebuild the destroyed schools, an undertaking that Pandit estimates will cost 20 billion rupees ($194 million).

“We plan to build them in three years,” Pandit says.

Sapkota, a keen student who usually secures 76 percent marks and ranks ninth in her class, is focused on doing well on her SLC exam so she’ll be eligible to study nursing at a state university.

“No one in my family has pursued nursing, and my family is happy that I plan to study nursing,” Sapkota says. “I want to work in my district.”

Shilu Manandhar, GPJ, translated some of the interviews from Nepali.