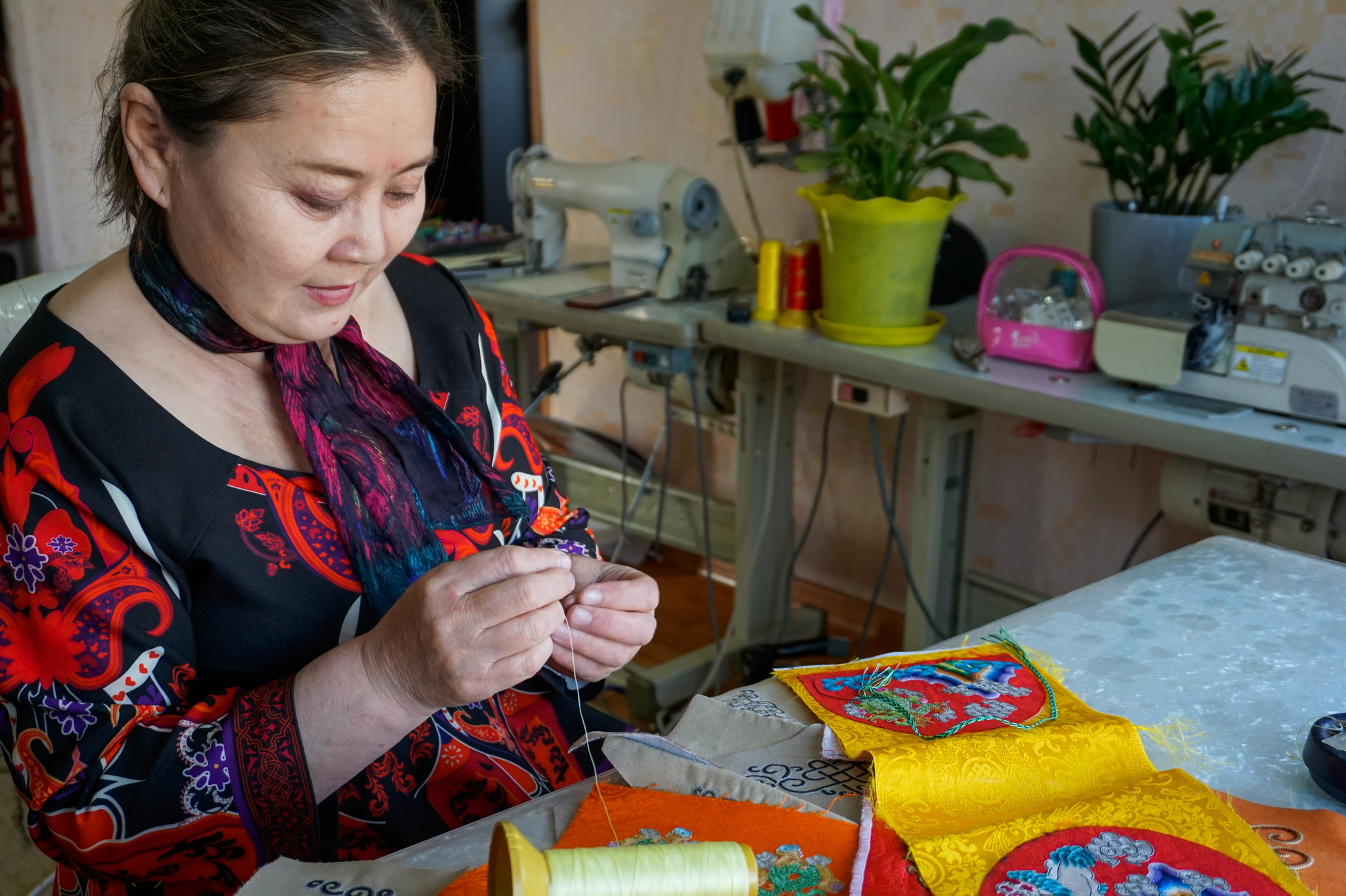 DALANZADGAD, UMNUGOVI PROVINCE, MONGOLIA — Sunlight filters through the window in the corner of Tsetsegdelger Tseveen’s house, where she has set up her studio. Various handicrafts are scattered across her table, including belts and daalin, or snuff bottle pouches, each decorated in elaborate colors, patterns and figures, such as dragons, eagles, lions and tigers.

At 50 years old, Tsetsegdelger has practiced traditional Mongolian embroidery for three decades. In 2017, the Household Services Development Research Association, a prominent nongovernmental organization that works with the garment industry, awarded her the title of master embroiderer, making her the first person in the country to receive this honor.

Producing such intricate work by hand with a needle and thread is laborious and time-consuming. But Tsetsegdelger’s efforts have helped revive the practice of traditional embroidery, an important part of Mongolia’s cultural heritage that for many years was in danger of dying out. In addition to producing and selling her own work, Tsetsegdelger has also taught traditional embroidery to more than 6,000 people in free workshops across the country since 2014.

The coronavirus pandemic has forced Mongolians to explore new ways to generate income and support their families. More and more people are making use of lessons like Tsetsegdelger’s to produce and sell traditional handicrafts — and save a dying art.

Sitting in her studio, between creating her own works and taking orders from customers over the phone, Tsetsegdelger also fields calls from Mongolians who want her advice on how to make a pattern or snuff bag. “Among my disciples, about 360 of them work solely on embroidery to sustain their livelihoods,” she says. 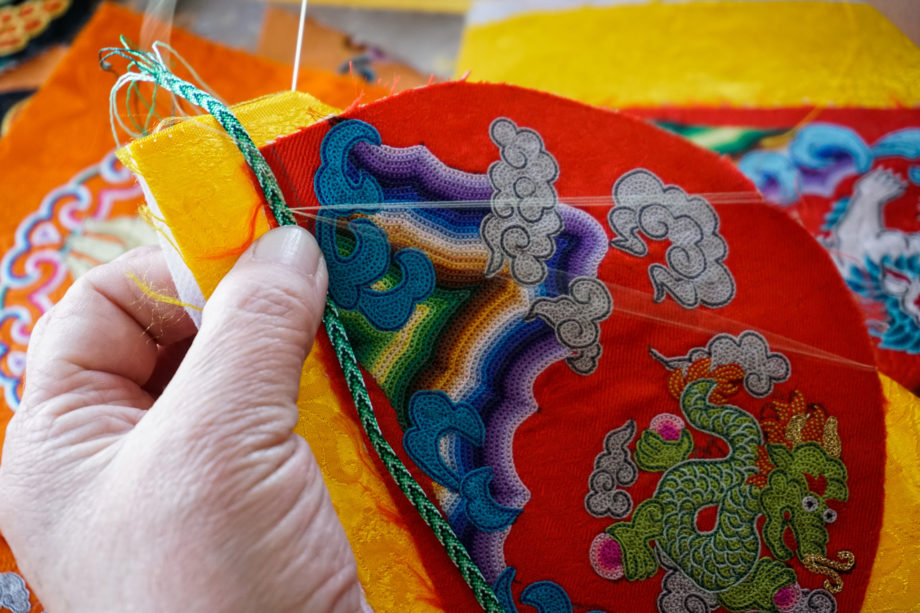 The revival of traditional Mongolian embroidery happened only recently. During the Great Repression, which began in 1922 and peaked between 1937 and 1939, Mongolian authorities backed by Joseph Stalin – the ruler of the Soviet Union, which held enormous influence over Mongolia’s socialist government – killed thousands of Mongolian intellectuals, monks and ordinary citizens who were deemed a threat to the Soviet Union.

The purges involved the looting and burning of invaluable works of Mongolian cultural heritage, some of which were taken to Russia and are now held at the State Hermitage Museum in Saint Petersburg.

By 1980, only a few people in Mongolia still knew the art of traditional embroidery.

In 2005, however, Mongolia joined the UNESCO Convention for the Safeguarding of the Intangible Cultural Heritage. And in 2019, the Mongolian government launched the National Program to Protect the Intangible Cultural Heritage, creating an official registry of traditions and practices to be preserved and designating 102 “heritage bearers,” including traditional embroiderers, who have upheld these art forms.

There are no official figures on how many traditional embroiderers currently practice in Mongolia. But experts like Tsetsegdelger say they have seen interest take off during the pandemic, and there are now many active Facebook groups dedicated to the art form. The main reason that traditional embroidery survives today is not because of government support, but instead because of the efforts of embroiderers like Tsetsegdelger who have worked to sustain the practice. 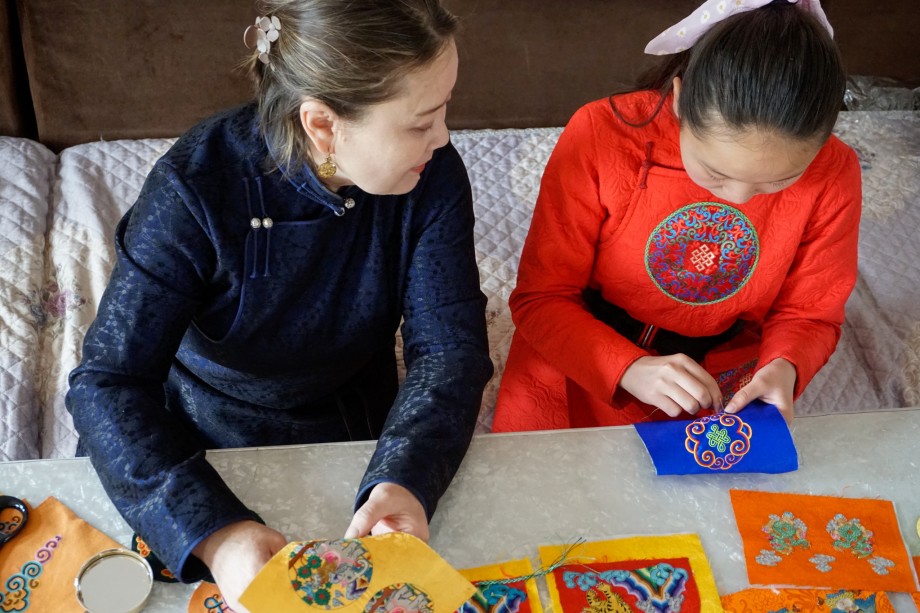 Tsengelsaikhan Zadi, a top embroiderer who serves as one of Mongolia’s official heritage bearers, has worked to promote the art form since the 1990s and has organized several national embroidery competitions to raise awareness and encourage people to take it up. The lack of knowledge about traditional embroidery in the country continues to astound her.

“Embroidery is the most under-researched intangible cultural heritage of Mongolia,” Tsengelsaikhan says.

In 2019, Gantsetseg Ser-Od, another of the country’s foremost experts in traditional embroidery, began offering free embroidery classes at the Mongolian Art Center for Children’s Creativity in Ulaanbaatar, helping to pass the art form to the next generation. Since then, 170 children have participated in the classes, Gantsetseg says, and the art center shifted to online classes during the pandemic, allowing students to continue learning despite the country’s lockdown restrictions.

“In hindsight, the revival of our intangible cultural heritage on the verge of being forgotten has to do with people starting to take interest in it and consume items decorated with the traditional embroidery,” Gantsetseg says. 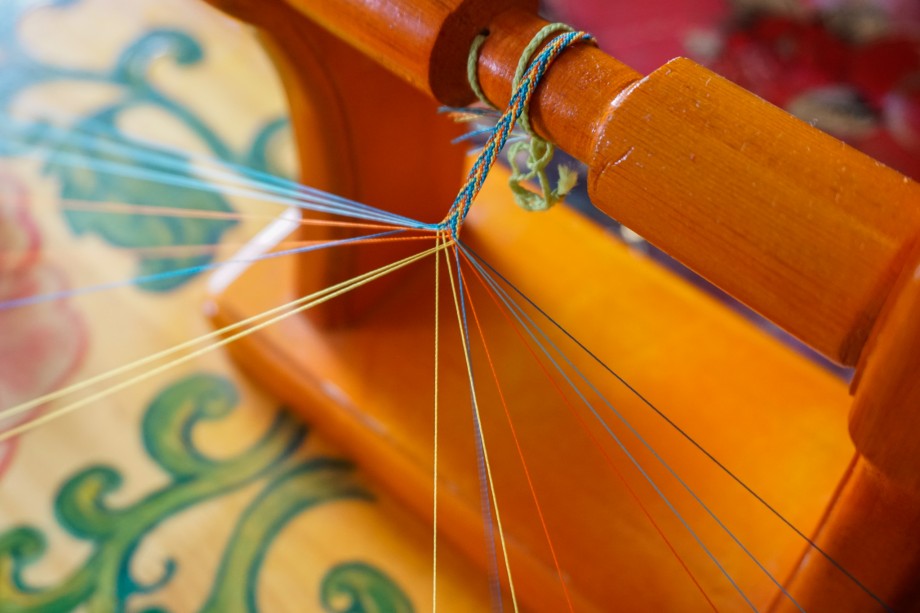 The pandemic has provided an added impetus for people to take up traditional embroidery. According to a survey conducted in December by the National Statistics Office of Mongolia, 27% of business owners who participated reported receiving no income during the government-imposed lockdown in November, and 30% of households reported losing at least 60% of their income.

Selling traditional handicrafts has allowed families to supplement their income during this difficult time. Margad Olzvoi, 14, recently took up traditional coin table weaving, a form of embroidery. After she began selling her handicrafts, she made about 200,000 Mongolian togrogs ($70) in two months.

“With the income I made from weaving, I buy mobile data for my online lessons,” she says. 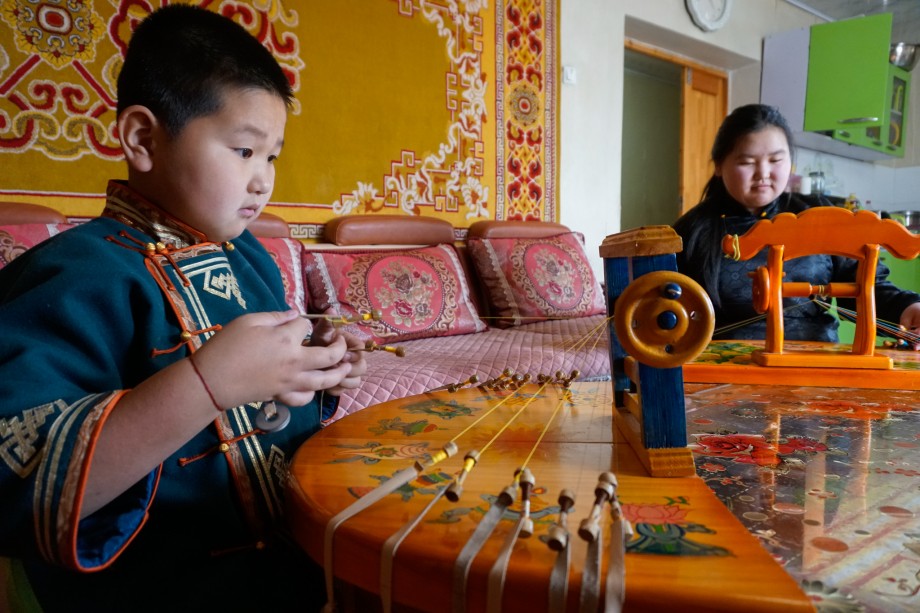 Her brother, Shurenduu Olzvoi, 8, has started learning the art form as well. “I will collect my money to buy a cool phone when I finish the fifth grade,” he says with a smile.

Now, far from being forgotten, traditional embroidery seems more popular than ever. In her studio, Tsetsegdelger deftly threads her needle as she prepares to work.

“Orders,” she says, “are coming in constantly.”